Riot has built themselves quite the product in the past few years in League of Legends. The explosive popularity of the game elevated not just the multiplayer online battle arena genre, but all competitive games have gotten new purchase thanks to the drastically increased interest in the ever exotic "eSport." ESPN covers the ebb and flow of CounterStrike matches daily - if there was an appropriate time to let go of the "games vs sports" buggaboos and just accept virtual competition as a new and valid force in the world of demi-Darwinian entertainment, it would look like right now.

But to accept eSports as a legitimate thing and confirm League of Legends as its de facto leader (which shouldn't be that hard considering the bucket loads of money spilling from that business war machine), we have to start holding it the standards that we hold other legitimate things, namely how we draw barriers between acceptable behavior and practices that are unbecoming of whatever we hope an eSports organization becomes. Games are only games because of their rules, after all. Riot just recently clarified theirs in the form of two overseeing doctrines, the LCS Penalty Index and the Global Penalty Index. We're going to focus on the LCS Index today.

Riot has had an enforcement policy in the past, which usually involved them investigating issues on a case by case basis, and identifying the appropriate course of action in the heat of the moment. This largely built a correctional system based on first impressions and estimates of the relevance of more horizontal precedents that may not be directly related, but could serve as a landmark on a sliding scale. There were punishments handed out for things that are quite punishable - toxic behavior in game, making obscene gestures, and elo boosting (or the act of having better players power level your account in order to gain a high standing in the rankings without putting forth the effort). The system wasn't incredibly consistent, though. G2 Esport's Trick and Dream Team's Shernfire were both dinged for elo boosting, but where Shern was disqualified from competing for the rest of the 2015 season, Trick was banned for 12 games and was sentenced to 60 hours of community service. It's relevent to mention that they were in two different Leagues, and Trick had the unfortunate luck of being in a region that takes LoL way more seriously than others. But the chaotic and unbalanced nature of these punishments still stand. Without something consistent and reliable, this system will have a harder time keeping things in order. Thusly, these indexes were born.

The LCS Index, which only applies to North America and Europe, hopes to bring standardization to these premier zones in order to keep the standards of integrity high and set a good example for the rest of the participating regions. They are split into three categories: General penalties, In-game penalties, and Administrative penalties. The full document is available for download here, but here's a quick look at some of the stand outs. 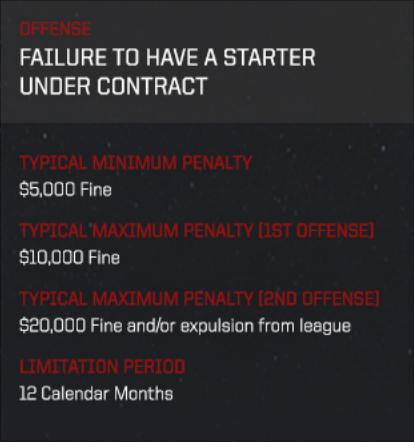 Failure to Have a Starter Under Contract

This has become an increasingly big issue to Riot. Late last year, they began enforcing rules regarding roster management with a focus on granting players more agency over their membership in teams and over the money they can make while playing. Teams aren't allowed to impose non-compete clauses on player's contracts, and the contracts can only be a maximum three years long and require the player to hold a starting position in a pro game in the LCS. That last part is key and has been the source of much friction between teams and their players. Some teams have been fined in the past for these infringements, maybe famously the Copenhagen Wolves who found them selves fined multiple times for player contract related shenanigans. Now, the minimum fine is almost twice as much as the highest fine the Wolves have gotten. It's a clear statement to the regions that Riot is going to be looking out for player interests in a way that many "traditional" sports can't even claim to do. 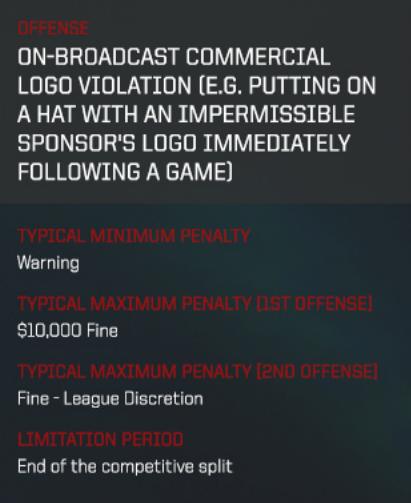 Remember, with becoming a global presence on broadcast (internet) television also comes a responsibility to represent the completely controversy-sterile interests of stakeholders and corporate sponsors. If Riot's Spring Split has a big Coca-Cola logo on the media, you can't be caught drinking Pepsi on the trophy podium. If other rising brands like the UFC can be looked to as a signal from the future, Riot could be really getting ready to get heavy handed about protecting their sponsorship relationships. 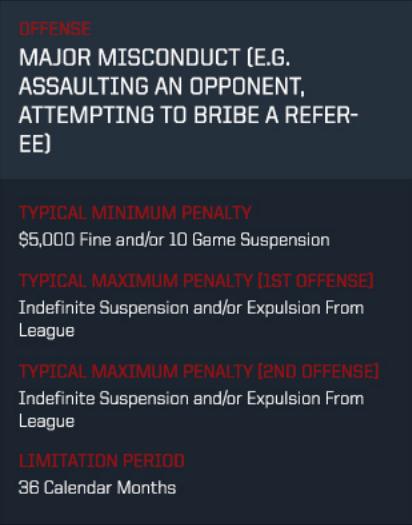 Defined in examples such as assaulting an opponent or attempting to bribe an official, I have no knowledge of any player engaging in actions that would have provoked a penalty like this up until this point. That doesn't mean there shouldn't be a clearly defined punishment for players to expect should they partake in something like this. The punishment seems appropriately severe. $5,000 and/or 10 game suspension is the minimum penalty, with upwards of indefinite suspension/expulsion from the league for a first offense. Salty about that gank and wanna hit your opponent? Don't even think about it. 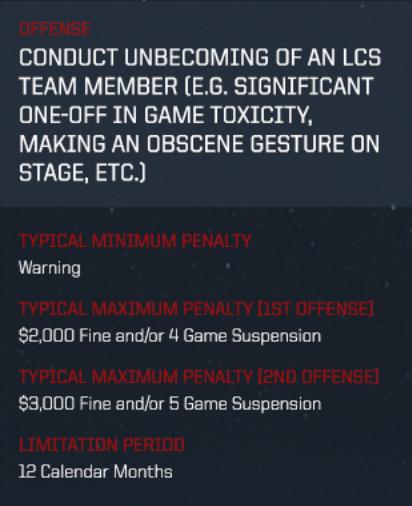 Possibly the most important standardization on the list, there are many instances of this sort of conduct during games throughout the years. Many of these instances have very different punishments, even within the EU and NA regions. Much of this difference comes from the length of time in which individuals are suspended for this sort of behavior, as well as the amount in which they're fined for it, if they are fined at all. The index hopes to put a flat expectation in place for anyone who might be talking a little too much trash. Minimum penalty is a simple warning, but if something has to happen, a fine of $2,000 and a 4 game suspension is the maximum for first offenses. There's still a lot to work with in that space, but hopefully the threat of that fine and penalty time will make people like Hai think twice before he flips Febiven the bird again.

It's important to mention that Riot has given themselves a bit of room to interpret these categories and penalties as they see fit. If extenuating circumstances exist, they have the power to change details of the penalties or scope of their jurisdiction as they see fit. Also, many of these penalties carry pretty long limitation periods, some as long as 36 months, but even the 6 month spaces are a pretty sizable amount of time to hope you don't get fined or suspended. It's a good start, though.

How do you feel about the LCS Index? Let us know on Facebook or Twitter, and don't forget to check out our Leaguepedia for the latest info on the LCS and the rest of the regions of the Pro scene.

League of Legends is Becoming More Social with Clubs

How Does the LCS Work?