If you think Riot Games' mega MOBA, League of Legends, is a big deal in the United States, you should see how it's treated on a global stage. Sure, the markets aren't as big as the LCS governed North American and European regions, but the hype and fandom for the game all over the world is multiplying exponentially. Last year's World Championships were held in many different places across the pond, and the champions are Korean. In short: this game is pretty huge.

As the game expands, so does the recognition of its complex layers of rules and regulations instilled to make sure everyone is playing at their best and most fair. Riot has dealt with discipline in a number of ways in the past, and even though they try to be as swift and just as possible, even they would admit that their approach in the past as inconsistent and confusing. An attempt to standardize the process and further stabilize the eSport was introduced last week in the form of a new ruleset, hammered out in detail between the LCS Penalty Index and the Global Penalty Index.

We covered the LCS Penalty Index earlier in the week, with its drilled down approach to governing. It's clear they are setting a standard for other regions in the league. As a body with more vertical precedent, the Global Index is full of rules and regs that further govern players, coaches, and teams in ways that supercede all other Indexes. They intersect and overlap in some key areas, like extreme or ongoing misconduct or cheating, but the Global Index looks to dictate some of the more cardinal sins of pro gaming in a way that can't be (or probably wouldn't be) reinterpreted or misconstrued on the regional front. Here's a cursory look at some of the stand outs. 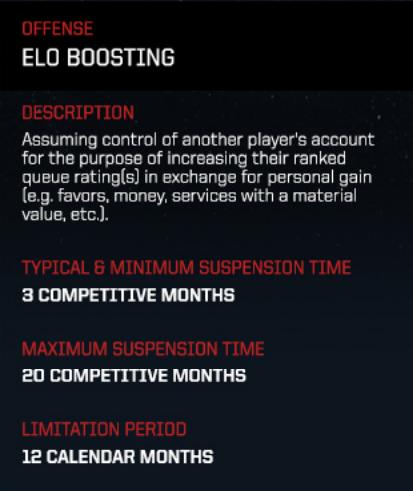 A big issue in the world of competitive League is the relationship between retaining the value of a pro-player's rank and status in the game vs. their casual freedom to play League when and how they want. Plenty of pros have multiple accounts for when they want to grind through ranks or try strategies and champions that are risk heavy in order to not damage their queue rank (and, in turn, their livelihood). Some would rather just play on friends' accounts, which has become a murky swamp of an issue more or less since the pro scene started. The sort of benefits that a casual player could enjoy from a professional squatting with their account goes without saying, but this isn't explicitly ELO Boosting. There needs to be an exchange of money for the service of making someone else better for a pro to actually be considered boosting, and there is a separate penalty for this other offense, at least according to the LCS.

Like Gold Farming in MMOs, ELO boosting is one of those black market practices that is incredibly popular but heavily looked down upon. Unlike MMOs, the benefit gained is felt in a competitive space, meaning people can essentially pay money to gain better standings at the expense of other people, and that's a no no in any game. Being illegal doesn't stop it from being one of the more popular infractions, though. Maybe a mandatory minimum three month suspension will?

Player Intensively Tampering With or Poaching Another Player

Tampering and Poaching are two versions of a similar offense. When a player makes active attempts at courting another player from the team they are on, that's tampering. If the courted player ends up with the team of the tamperer, that's poaching. There are already rules in place banning this sort of activity, as Riot takes contract negotiations very seriously, This is a big enough deal to the company to establish some overarching judgement on the topic, as well as some very particular phrasing to make these actions as conspicuous as possible.

They go out of their way to define "intensive", which to them "is understood to be a credible, directed, and earnest attempt to make an offer of employment to a coach or player who is under a league contract". They also make the suggestion that "any discussion of contractual relations, whether that pertains to the current contractual status or future potential employment after the duration of an active contact, is impermissible," just to avoid any confusion as to what kind of conversations could be walking the line of intensivity. They also pretty boldly declare that any contract that talks about other players or coaches on other teams needs to be done by management only. To avoid the minimum 5 month suspension, may as well just leave it up to them. 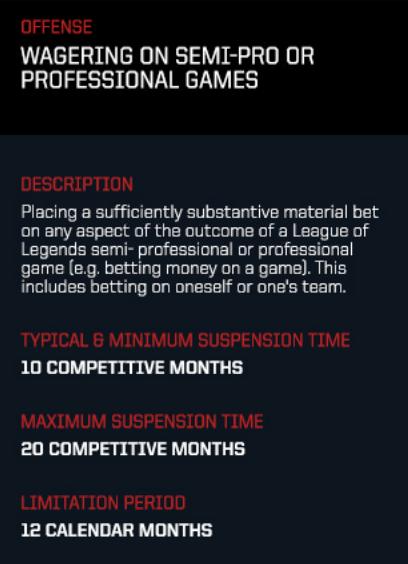 Wagering on Semi-Pro or Professional Games

Another bit of double dipping here, as Riot already has rules in place to dissuade gambling on games by players. What I find to be most interesting is the very passive and surprisingly open wording used to describe it. "Placing a sufficiently substantive material bet..." isn't as concrete a definition of wagering that I would expect. The specific example in the index is money, but could something with substantive value also include things that cost money, but aren't currency themselves (i.e. skins, characters, merchandise)? And what is the minimum value required for something to be "substantive"? Is some gambling okay, but up to a certain amount?

Like with the LCS Index, Riot leaves some room for themselves to modify the maximum and minimum sentences as they see fit, should circumstances be deemed extenuating.  Suspensions stemming from a violation of one of these index rules are binding in every professional or semi-pro league sanctioned by Riot. If suspended, players and coaches will not be able to participate in the All Star Event, and if you are contracted by a league organization, you may also be subject to these penalties while not at officially sanctioned events.

How do you feel about the Global Index compared the LCS Index? Let us know on Facebook or Twitter, and don't forget to check out our Leaguepedia for the latest info on the LCS and the rest of the regions of the Pro scene.

League of Legends is Becoming More Social with Clubs