Once a well regarded member of the US Armed Forces, Gabriel Reyes is now the ruthless mercenary known as "Reaper". A brutal and efficient killer, he serves no master and isn't tied down by any one side of a conflict. His motivations are as mysterious as his apparent immortality, and his violent reputation is well known among the remaining members of Overwatch.

While playing him, you'll notice two things about Reaper almost immediately: he's relatively slow for a flanker, and he does an incredible amount of damage from close range. Reaper is methodical and incisive, and he's most effective when catching unaware, isolated players and eliminating them before support can arrive.

Reaper's ability suite encourages the sort of ambush-style play that really differentiates him from other fast flankers. He's very straight forward in this way, making him a pretty good choice for people who are new to the offense role, though I wouldn't recommend him as the "perfect" character for someone brand new to the game.

His passive, The Reaping, produces souls from the bodies of the dead, allowing him to regain health every time he kills something. This is a good way to sustain Reaper in drawn out encounters, or to keep him moving in the shadows between ganks without having to find a heath pack. Aim for low health targets first when fighting multiple enemies at once to try and get more health as quickly as possible.

As with any video game shotgun, Reaper's Hellfire Shotguns are most effective when as close as possible to your victims. The fire rate is slow, and the damage drop off relative to distance is dramatic, so engaging the enemy while they are distracted or incapacitated is key to maximizing kill potential. As the damage done can put a less resilient hero like Tracer down with ease, hitting her cleanly is often a chore not worth pursuing because of her speed. This assassin actually does his best work on bigger, slower targets like Reinhardt and Winston, as they have so much target area that it's much more likely you'll put all of your pellets on them every shot, and you'll still have the speed advantage in a one-on-one skirmish. 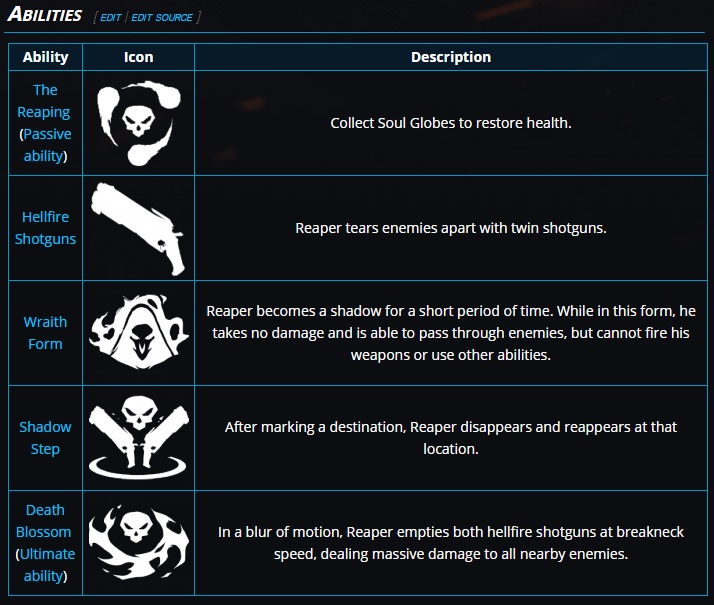 Shadow Step is Reaper's main tool for finding optimal positions behind enemy sight lines. It allows you to teleport over a short distance, easily plopping himself into high ground to patiently wait for his chance to strike. During the process of teleportation, you are incredibly vulnerable. Only Shadow Step when in cover, and be certain you aren't teleporting yourself right into someone's clutches.

If you do end up in a bad position, Wraith Form is your way out. Be it a bad Shadow Step, a botched ambush, or you're caught off guard by enemy players, Wraith Form is your get-out-of-death-free card. You move faster and are impervious to all damage when you morph into a cloud of smoke and dance away from danger. Torbjorn Turret got the drop on you? D.Va's suit set to self-destruct? Can't dodge Hanzo's dragons? No problem! Also, Wrath Form can free you from Zarya's Graviton Surge and Mei's Blizzard (so long as you use it BEFORE being frozen). It also can completely negate the effect of Zenyatta's Orb of Discord, and you can pick up heath packs while in it. Remember, you are invulnerable during Wraith Form, not invisible. If you attempt to leave an engagement with it, the enemy is free to follow you, so make sure you have a getaway route in mind before jumping in.

Reaper's ultimate ability is Death Blossom, where he does his best Equilibrium impression by spinning around in circles and lighting up everyone around him with rapid gunfire. When used correctly, this can be one of the most disruptive and lethal ultimates in the game. All the rules of Reaper's Hellfire Shotguns apply here: the closer you are to the target, the more damage you will do to the target. As you're spinning, you have some control over the direction you're moving, so keep that in mind when planning your trajectory. Resist the urge to run into a crowd head on and spam Death Blossom. You are not invulnerable during it, and you can easily be focused down and then disabled or killed. The element of surprise is key here, and this ability is an especially good follow-up to a well-timed Shadow Step behind objective defenses.

If you need some more advice on how to be death incarnate (or have some advice of your own to share), come to our Overwatch Wiki. Let us know how your Reaper game is coming along on Facebook and Twitter.

Overwatch Aims Straight for the Heart of the Shooter Genre