There hasn't been a game on mobile devices since Angry Birds that has so collectively captured the hearts and minds of the world quite like Pokemon GO. Niantic's reskinning of their previous game, Ingress, with Nintendo and The Pokemon Company's flagship license, provides the nostalgic boon that taps directly into the childhoods of one of gaming's most popular demographics. If Nintendo's stock is any indication, this game is a rousing success.

It's also a great mystery. On the surface, the game seems straightforward, but there are several nuances and meta systems are well hidden or poorly explained. These have left players clamoring for answers, many times relying on information that isn't correct or taking chances on unproven theories. This may not change that sort of trial and error discovery process for things in the future, but it will at least drag some of the cloudiest of Pokemon GO facts and features into the light.

The maximum level a trainer can be is 40, and the way that influences the strength of your Pokemon upon discovery is a bit nuanced. Redditor allancaesar (via Matthew Egan) posted some interesting findings about the relationship between trainers and Pokemon levels after a deep data mining expedition.

Basically, the Pokemon you catch in the later levels of the game will remain a static strength. If you're wondering when the time is to really commit candies, stardust, and that all important catchy-nickname-stuff towards what could become your permanent stable of Pokemon, it would be after level 30.

2. Battle Is Way More Intricate Under the Hood

The same data dump that produced the level cap findings also fleshed out some of the interesting combat mechanics happening behind the scenes in any given gym battle.

There is more to a duel than simply tapping and sliding. Much of your success is based on preparation, bringing the logic behind the proper Pokemon iterations over to the game in smaller ways. The big take-away is STAB, which was always a huge factor in determining what kind of skills you teach your Pokemon on handhelds. With skills varying among each species of Pokemon, ones who have skills that match their type will become more favorable catches.

The eggs you get may produce a random Pokemon, but there is a method to the madness. Depend on the distance of movement required to incubate, the pool from which the random Pokemon is chosen changes. US Gamer has a good chart depicting the possibilities. The Egg page on the Pokemon Go Wiki also includes information on which types of eggs produce which Pokemon. 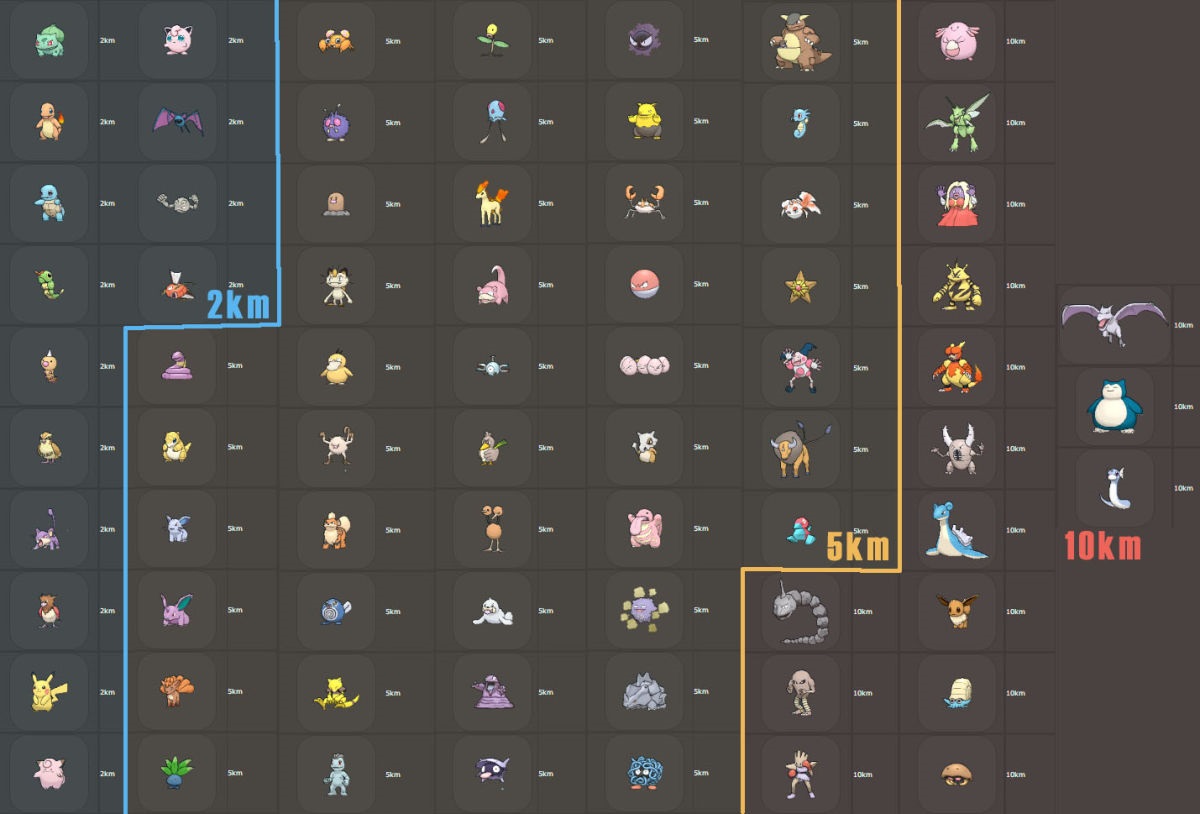 As you can see, the longer the distance, the rarer the Pokemon. (Though, is Eevee really all that rare?) Not all travel is created equal, though. Walking speed (or some approximation of it) is the only viable speed that will track consistent progress during incubation. Driving and taking the train won't work, as you have to keep your speed around 12 MPH. That being said, I've had more than one egg hatch in my car during a drive. The slowing and starting of city traffic is finally useful for something!

4. Gotta Track Them All

The little white box in the lower right hand corner of your HUD isn't simply there to taunt you. Ideally, it's a tool that helps your identify, track, and hopefully catch wild Pokemon. When strolling around, you'll see up to three creatures featured in the little box. If you tap it, the view explodes to up to nine nearby Pokemon. Under these Pokemon are a set of foot prints in groups of one, two or three. These prints denote the distance the corresponding Pokemon is from you. The exact distance that each of these represent is one of most contentious and hotly debated mysteries in the game. Some folks think each represent as low as 40 meters each, some as high as 150 meters each. There's really no great determiner here, but the Trainer Tips channel on YouTube has done some decent research on the matter. They've even converted the meter lengths to feet for us 'Mericans.

If you select a specific Pokemon on the list, it becomes the focus of your tracker. Once locked on, walk around. If the little box begins to pulse green, it means your walking in the right direction. The faster the pulse, the closer you are (the feet should reflect this as well). Some say that the compass can be used to determine direction as well. Tapping it unlocks it and allows you to point it wherever you want. If it's pointing in the direction of the targeted Pokemon, the sensor pulse.

It will be difficult to try these methods right now, though. The tracking system of Pokemon GO has been on the fritz for days, registering all Pokemon as three steps away, making it impossible to determine distance. The system was already a mystery, and this setback isn't helping anything, that's for sure.

There's only one way to be the very best, that no one ever was. Catching them all, of course! Throwing Pokeballs at semi-stationary critters is what you'll be doing 95% of your time with this game, so it's important to know the nitty gritty. By now, the Internet has firmly wiggled away some of the more unlikely rumors about the catching system and settled on some hard and fast rules of the road. The color of the ring denotes difficulty of catch, from green to red. Getting the ball inside the inner ring (that shrinks) makes for a better throw and better experience bonuses. Higher level balls catch higher level Pokemon easier. You know, the basics.

Pokemon will run from you if you take too long to catch it or if you make too many attempts. Pokemon get harder to catch as the level up, but at higher levels they also actively resist being hit with flying Pokeballs more vigilantly. You'll have to strategically lace throws between countless headbutts and jumps in order to catch what your searching for. There were some rumors that a well-timed tap after a missed throw could refund your Pokeballs, but that has been debunked. Be wary of these "Mew is under the truck" style urban legends. 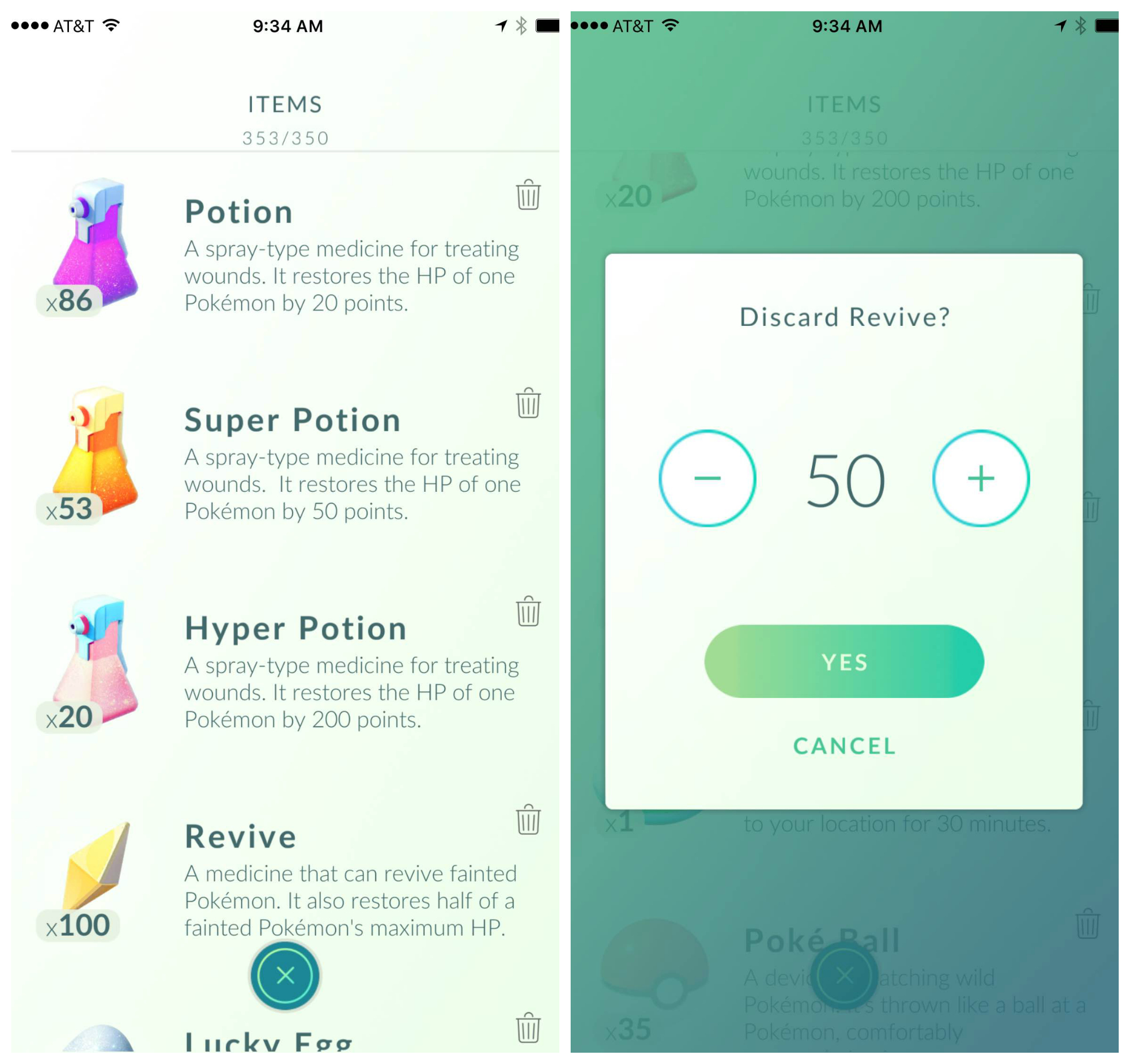 You have a maximum starting item limit of 350. That seems like plenty of space, but the moment you bike down a street with six PokeStops and realize that you can't collect from any of them because your bag is full, you'll see that that isn't the case. Items should be constantly managed if you roam the wild for Pokemon often.

A good way to keep the number down? Let go of those Potions and Revives. They sound great in theory, as they recover your Pokemon's heath and bring them back to their feet, but unless you do a lot of gym battling, you don't need a doomsday prepper-sized stockpile. The items you do want to stock up on are Pokeballs and Razz Berries, as you'll need these frequently when catching Pokemon. And since the only way to get bigger, better balls is through PokeStops, you really don't want to mess up any opportunity to restock.

Also a higher priority are Lucky Eggs, Incense, and Lure Modules. All are purchasable in the in-game store for real money, but also retrievable in a lucky spin at a PokeStop (and by leveling up). Save these for a rainy day, and make sure they're last on your cut list when the space is limited. 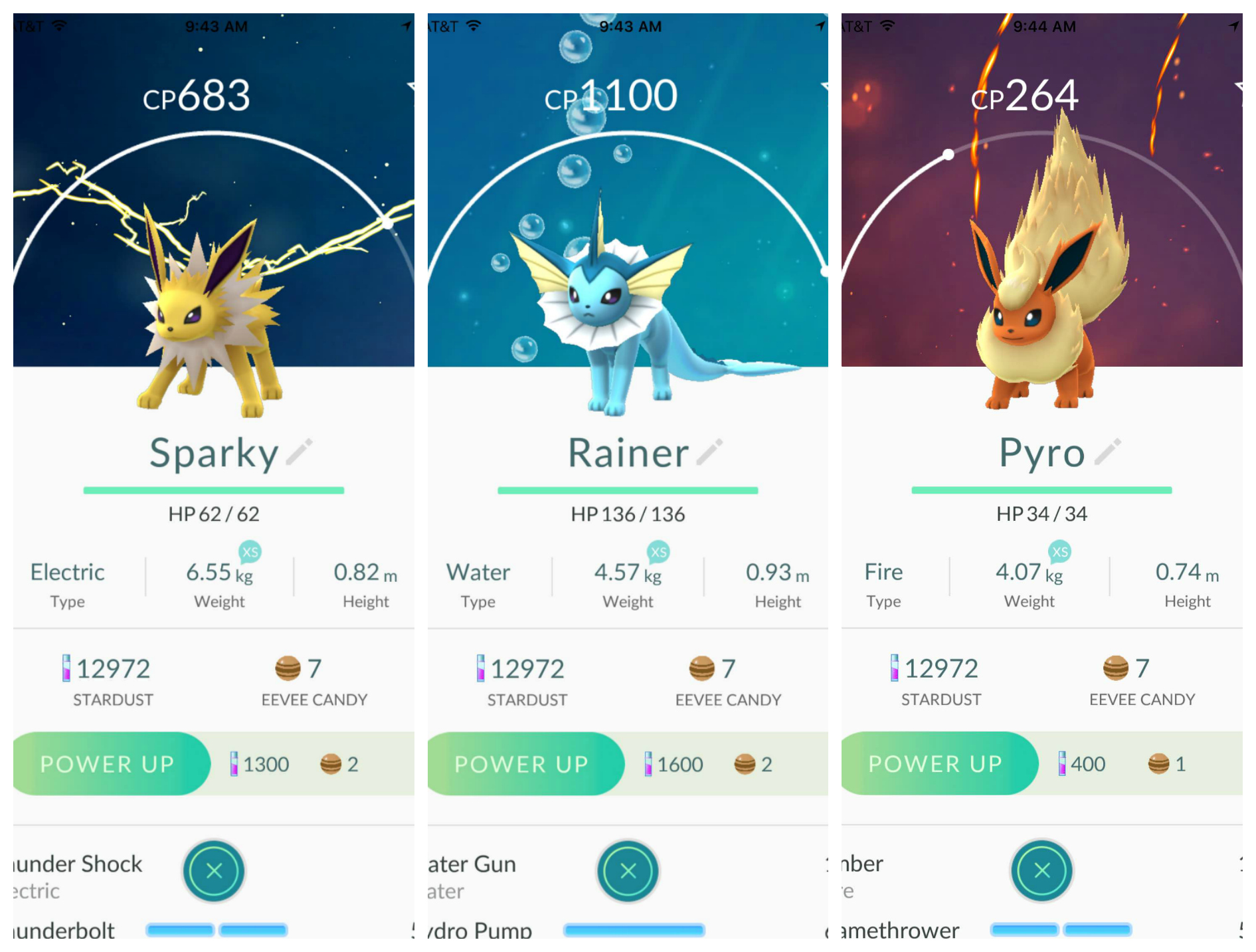 Eevee has always been a fan favorite Pokemon because A) it's adorable, and

it's quite versatile. After evolving out of its Normal type first stage, it can take on one of a number for forms. In the original games, this involves the help of elemental stones. Pokemon GO has no such items, yet it has all three of Eevee's original evolutions. How does one determine which one they'll get after spending their hard earned Eevee candies?

The original prevailing theory early on was that it was completely random, and some even still believe it is, as there is enough wiggle room in some of the other theories that an air of doubt will never really leave these little thought bubbles. One of the early conspiracy theories linked Eevee's evolutions with the various special attacks Eevee can get. An Eevee with Swift will produce a Vaporeon, one with Dig will produce a Jolteon, etc. As YouTuber King Bejita demonstrated in a video on his channel, that isn't the case.

A second, more promising theory rose from the ashes of the first thanks to Redditors TheAztek and smithnigel. They believed that the evolution of Eevee's are tied to their names. If you rename your Eevee after one of the Eevee Brothers from the Pokemon cartoon, then the chances are very high that it will turn into that brother's Pokemon. I tried it personally and it worked. My Eevee, Sparky, evolved successfully into a Jolteon.

There's a hole in the theory, though. As much of the feedback has been overwhelmingly positive, there general consensus is that this really only works once. Two Eevee's can't be evolved this way, as the second one is just random. Now, whether this has something to do with the server situation or if it's a hard and fast rule has yet to be determined.

These are the only obtuse systems in the game so far, so if you have something to share about them, please come to the Pokemon GO Wiki and spread the wealth. Let us know how the path to the The Very Best is working out for you on Twitter and Facebook.

Everything You Need to Know About Overwatch's Ana