With Worlds creeping up ever so quickly on us, the next few patches look to play it relatively safe. Changes will happen with broadening the Pro playing field as far as viability is concerned. In the specific case of this patch, they're sending out a bunch of small time tweaks to many champions across all roles in hopes to make the overall pick rate something more dynamic. Nerfing some of the the auto-picks and buffing some of the on-the-cusp champions should make for a deeper pool to wade in at the highest of levels. At least, that's the plan.

As far as big tournament play, Jayce hasn't seen much action since the 2014 World Championships, where PawN of Samsung Galaxy White rode him to championship victory. He was only picked once in the 2015 Worlds, and though he pops up every now and again during the LCS season, he's most popular over in Korea. That said, his pick rate is still leagues lower than other top laners in the pro scene.

Why is that? Well, Jayce is a Juggernaut, technically, but he doesn't scale heath/armor like a Garen or Illaoi. He is best at range, harassing opponents with his extreme range when in Cannon mode, with intention to leap in and finish the job while in Hammer mode. Being a ranged attacker whose attack speed isn't that great, Jayce isn't scary enough to stop certain champions. Gap-closers like Renekton will definitely get to Jayce at will, and high sustain champions will negate his offense completely. Not to mention his middling presence in teamfights. Piltover might need a new hero.

Riot looks to readjust Jayce's kit and put more emphasis on the follow-up hammering by lowering the mana cost of Thundering Blow to 40 at all ranks instead of a gradually increasing scale. After To The Skies! - another ability that got a flat mana cost adjustment earlier this season - Thundering Blow is usually what chunks wayward targets, as it does bonus damage equal to a percentage of the target's maximum heath and knocks the enemy back.

Previously, Jayce's ultimate, which switches his weapon back and forth between Hammer and Cannon mode, gave him bonus magic damage on his next Hammer attack. Now, it's bonus attack damage. With his other two big hammer abilities also scaling with AD, this makes focusing on damage in his build that much more efficient.  I like these changes, but will they bring Jayce off the bench more often?

Like its wild, real world counterpart, the jungle of Summoner's Rift is full of denizens that are diverse and dangerous in their own ways. Some more than others, and some more uniquely effective than the rest. The pro scene has a reliable stable of jungle picks that, while good, narrows the meta in relatively unhealthy ways. How do you widen the viable pool? With nerfs and bans, of course.

Punchy Piltover police officer, Vi, is a perfect jungler all ways except the most important: early clear speed. After level 6, she becomes an incredibly difficult ganker to impede. But because she can't power through camps like her contemporaries, she is probably hitting 6 after everyone else. In the high-level world of the pro scene, where speed is important in this position, Vi has found a seemingly permanent spot on the bench. A dismal fact, considering how fun she is to play.

Riot hopes to adjust her clear speed by tweaking a few of her numbers. Her passive, which gives her a shield after activating her other abilities, now cools down faster. Vault Breaker, her dashing Q, has a lower early cooldown as well. The knock back time is static at .7 seconds during all levels, instead of a gradual increase per level. Excessive Force, which deals bonus AoE damage on top of her auto attacks, has a charge system. Now, on the first level you take it, you get a full stack of charges immediately. Will this be what puts the power back in her punches?

On the other end of the spectrum, the go-to picks for pro-jungling, Gragas and Rek'Sai, are finding their kits nerfed. Riot has tied their nerfs to the same particular reasons. They turn up too early, lack risk, and have a lot of options. Gragas' Body Slam is both a wall-clearing dash and an enemy-bashing lockdown tool that makes him mobile and dangerous whenever he's near a lane. It's getting its cooldown increased from a flat 12 seconds to a gradient that works down to 12 from 16, level by level. His ult, Explosive Cask, has a travel time relative to the distance thrown. Which makes sense, because of physics, but was easily exploitable. Gragas could Body Slam his way into a fight and throw a Cask at himself, which had no travel time. This meant the damage and displacement would happen before you ever even saw the barrel on screen. Counterplay was near impossible. That's no bueno.

Rek'Sai had similar issue. Her choices came without much consequence, and her abilities seemed always accessible whenever she wanted/needed them. If those abilities involved throwing harmless pillows at people, then who cares. It didn't, of course. Her Tunnel and Void Rush abilities gave her a cross Rift mobility that is difficult to subvert. Both have their cooldowns lengthened early, in hopes that the incredible early game can be tamed out of auto pick/ban standing.

The stalwart and silent protection that turrets provide is irreplaceably important to early game League. When laning is going sideways, every character can usually rely on the slow and steady beatdown a turret will give a froggy opponent on your behalf. They are a shield of offense, punishing over aggression and controlling the ability to power towards the base without proper control of the field. There was a particularly glaring hole in the turrets game, and it involved how turrets decided to attack.

Normally, a turret will shoot at a champion if no minions are around. It will prioritize minions if they enter the danger zone before a champion does. If an enemy champion does damage to a champion allied with the turret, the turret will begin to pelt the champ with increasingly damaging blows. That is, so long as the friendly champ is in the danger zone while it happens. If a friendly champ is engaged by an enemy before making it to the zone, then the turret just kinda lets it happen. How rude.

Now, when an enemy attacks a friendly from the danger zone while the friendly is out of range of the danger zone, the enemy will draw aggro from the turret. This prevents those uncommon-but-present plays that effectively cut people off from the safety they should be promised. Additionally, turrets would fire randomly at champions once the minion wave was depleted. Now, it locks on to the closest champion.

At the end of last year, Marksmen got a big overhaul, with some of its key champions getting new tricks and the item pool getting transformative tweaks. That said, season 6 has found Marksmen in an inevitably bleak position as a whole. Pro players don't rely on but a small selection of marksmen in their team comps, and it usually depends on what their utility is outside of sustained, ranged damage dealing. This has made the "viable" choices for marksmen a laughably small corner of the role as a whole. Something has to change.

Riot, in hopes to not shake the game up too much right before Worlds, has decided to evaluate this elite caste of marksmen and nerf them a bit, in hopes to shine a light on some of the lower-tiered options' strengths.

This includes Ashe, who has slowly become a trusty pick because her damage output is high compared to other utility-focused marksman, and it doesn't come at a cost of her ability to kite people or engage from long distances. Her Ranger's Focus now only lasts four seconds instead of five, which lowers her dueling capability a smidge. Now, if she wants to burn someone down, she has less time to do it and has to act quickly. Enchanted Crystal Arrow now does less damage at its first two levels. It's now less of a finishing blow and more of an enabler.

Jhin, who is perfect for catching people running out of teamfight huddles or nailing junglers who are slinking away from failed ganks, fills a great role that has never really been able to be filled in quite this way before his debut. The problem becomes that he's also incredibly strong, enabling him to, as Riot it puts it, "start and clean up fights all on his own." The implication here being that he should be able to do one or the other, not both. There's a bunch of math involved here, so I'll just provide the specifics straight from the horse's mouth. 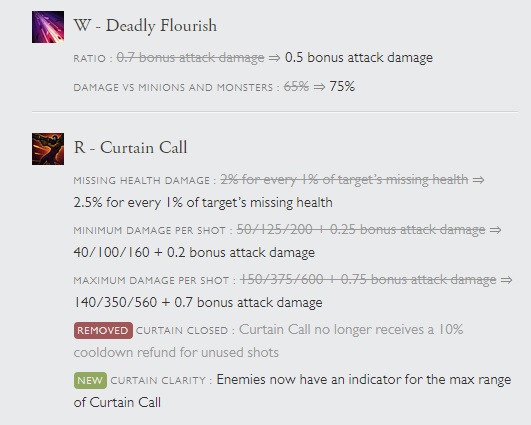 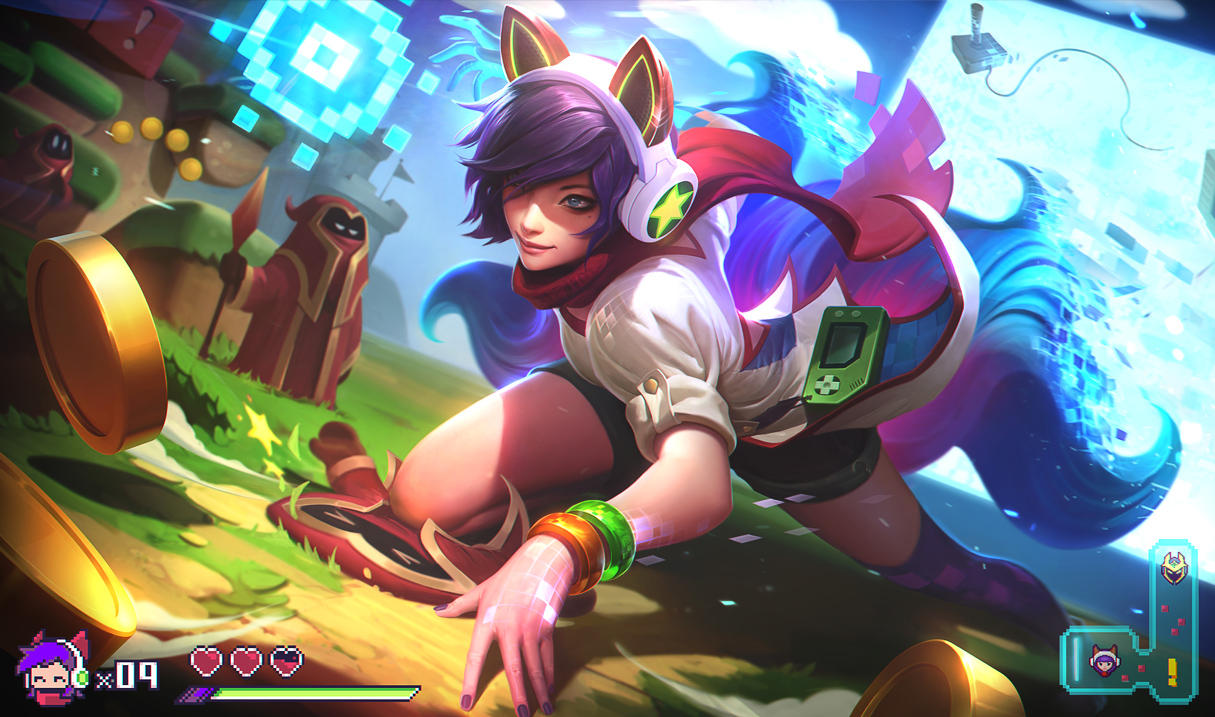 One of the most popular sets of skins is getting a few new entries to the collection in this patch. Ahri, Ezreal, and Corki are getting the Arcade treatment, and Riot may have out-done themselves on this one. Ahri's skin has a pretty apparent Zelda-inspiration, while Corki's is a shoutout to shooters like Space Invaders, and Ezreal oozes with JRPG flair. They are all very cool in their own right, and join Sona, Hecarim, Veigar and others as some of the best skins in the game.

If you want to know more about the rest of the changes this patch, including Diana's expanded pull reach and Gangplank's rebalancing, check out the blog post on Riot's website. Remember, the Leaguepedia is your premiere source for all of your pro League data, including the 2016 World Championships, so keep a tab open for us. And let us know what you like and don't like about 6.17 on Twitter and Facebook.