In World of Warcraft, it’s not uncommon for the greatest of villains to have once been great heroes. Their minds may have been tainted with darkness or their hearts might have shattered inside their chests, but something drove them to commit acts of evil. To many, Illidan Stormrage is nothing more than a demonic being and former ruler of the Black Temple. However, Illidan was once a night elf, a devoted brother, and a true friend.

Let's start from the beginning.

Illidan and his twin brother, Malfurion, grew up in Suramar with their close friend, Tyrande Whisperwind. While Tyrande and Malfurion quickly found their paths in life, Illidan was a wanderer searching for purpose. His amber eyes were a sign of great destiny and druidic potential – but it was Malfurion who came to master the druidic forces. Illidan practiced Highborne magic, and he became a personal caster for Kur'talos Ravencrest while searching for his destiny.

From the very start, Illidan had an appreciation for commanding magic. With this interest already sparked, it only took a small seed of distrust, planted by the satyr Xavius, for Illidan to pursue the dark power of the Burning Legion.

In his mind, his pursuit of power was meant to help him defeat the dark forces that threatened his home. While Illidan sought this power, there was always one person in the back of his mind: Tyrande. He often tried to excite her with his magic, but she was never impressed. To Illidan, powerful magic meant nearly everything. To Tyrande, it meant so little, and there was one night elf she had known her whole life that didn't lust after power: Malfurion.

When Illidan caught sight of Tyrande in the arms of his twin brother, he did not seek deadly revenge. He didn’t raze cities or vow to create chaos. With his broken heart, Illidan simply left. He journeyed alone to Zin-Azshari, leaving his previous life behind. 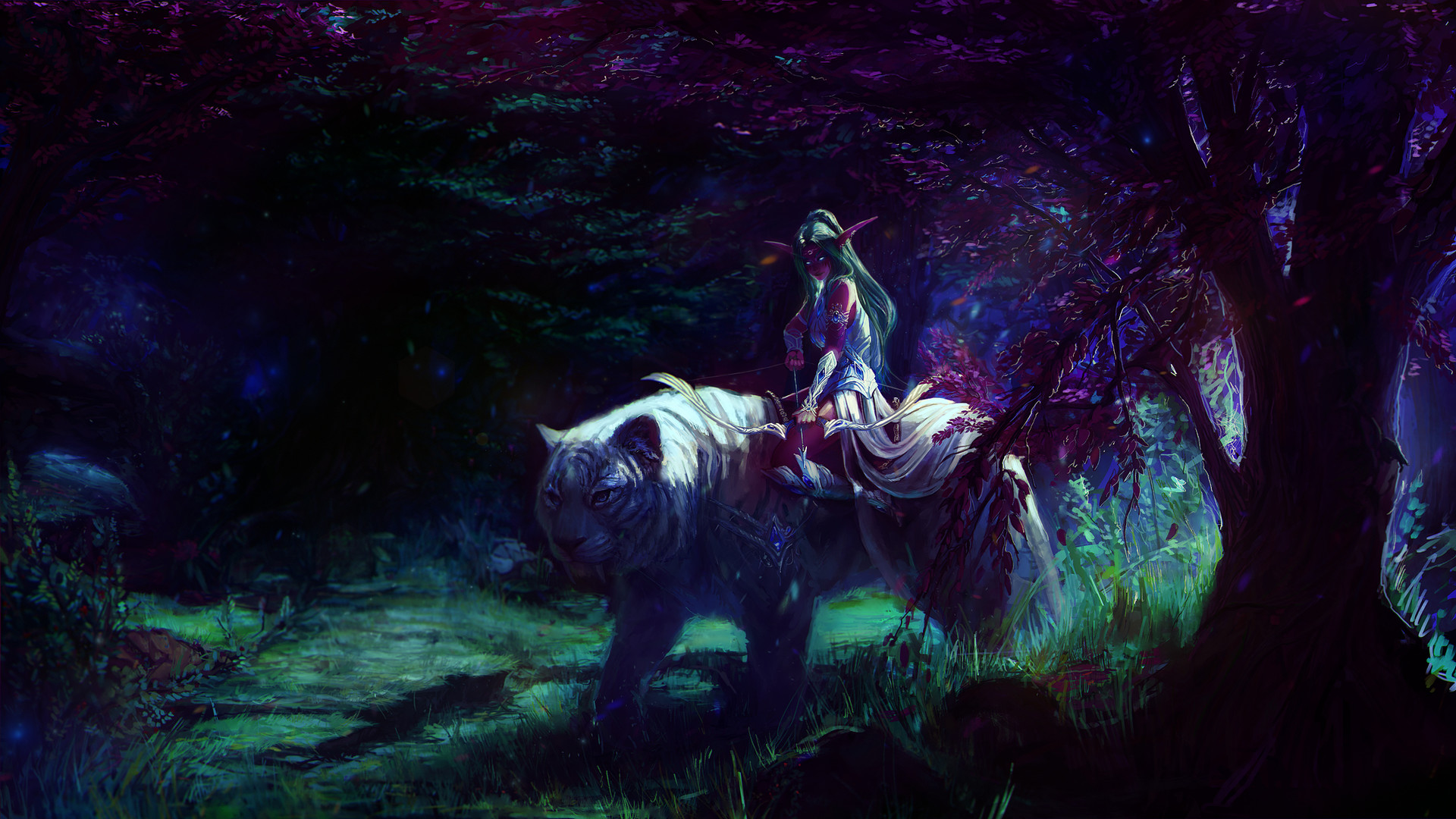 From here, Illidan’s journey started to spiral, and his exterior soon began to match the darkness within him.

His eyes were burned out and replaced by orbs of mystic fire – a “gift” from Sargeras. His skin became covered in arcane tattoos. He was transformed.

It wasn’t long before Illidan was reunited with his twin brother and Tyrande. While creating a new Well of Eternity, he was confronted by the two, along with the rest of the kaldorei leadership. A conflict ensued, and Malfurion was outraged at his brother for committing such treachery. Seeing no other choice, he ordered Illidan to be imprisoned deep below Hyjal.

For 10,000 years, Illidan was locked away in a lightless prison. Malfurion would sometimes visit his brother and attempt to pull him away from the magic that consumed him, but his efforts were unsuccessful. If there was a single figure that could steer Illidan down a different path, it was Tyrande – and it was Tyrande that set him free.

After thousands of years, Illidan’s love for her was undampened. Upon freeing him, she asked him to help her defeat the Legion, and he swore to assist. However, Malfurion disagreed with this decision. He thought Illidan to be too unpredictable and his release too reckless. But, to Tyrande, it was their only hope of victory. Illidan took note of his brother’s feelings, and sought to prove him wrong.

With good intentions, Illidan led a force of night elves into Felwood to hunt down the Legion. While there, he learned about the power of the Skull of Gul’dan and decided to seek out the demonic artifact. To Illidan, more power meant defeating the Legion. More power meant redeeming himself in the eyes of Tyrande. More power meant achieving what he always wanted.

Upon finding the skull, he claimed the power as his own – but at a steep price. The artifact changed him. Illidan was transformed into a demon, with large horns sprouting from his head and giant wings extending from his back. Oh, but the artifact gave him power. Illidan used his new form to defeat dreadlord Tichondrius and his forces, but his victory was not celebrated by all.

With his new demonic power, Tyrande and Malfurion turned away from Illidan. Malfurion claimed that his brother traded his soul for power, and he banished him from the forests. Illidan was hurt, and he felt that his sacrifice was unappreciated by those he cared for. He immediately left the night elf lands, as his brother demanded.

But, even after such abandonment, Illidan’s love for Tyrande did not lessen.

In a confrontation on the Broken Isles, Malfurion and Tyrande’s forces faced Illidan’s. Illidan and his retainers were forced to flee, but were followed by Tyrande. In an attempt to protect her, Illidan ensnared her and warned her against interfering.

It was here that Tyrande revealed to Illidan why she had chosen his brother over him. Illidan’s lust for power had caused him to lose sight of his own inner strength, something that his brother held onto. It was this encounter that made Illidan come to terms with his feelings. He had pursued power with the hope of winning Tyrande’s love, but it had instead pushed her away.

After the encounter, Illidan escaped to Lordaeron, and attempted to destroy Icecrown with the Eye of Sargeras. However, he was interrupted by Malfurion, who informed him that Tyrande was dead.

Truly heartbroken, Illidan mourned the loss of the woman he loved – until learning from Prince Kael’thas that Tyrande might still be alive.

Illidan begged Malfurion to allow him to assist in finding Tyrande, and it was he who found her under heavy attack from the undead. Illidan and his naga forces battled mercilessly, forcing their way through the battlefield, until reaching Tyrande. Then, Illidan did the unexpected.

After being passed over for his twin brother, suffering 10,000 years of imprisonment, and being rejected by the one he loved most, Illidan delivered Tyrande safely to Malfurion. She was astonished by his actions, and truly taken aback by his loyalty.

Malfurion told Illidan he was free to go, as long as he never threatened the night elves again. Illidan agreed, and immediately fled to Outland. He doubted he’d ever see his brother or the love of his life ever again.

Though separated, time continued to pass for Illidan, Tyrande, and Malfurion. Illidan faced off against Arthas, created an army of demon hunters, and was ultimately defeated by Maiev Shadowsong, the very one who guarded his prison for thousands of years. At the end of it all, Illidan’s corpse was brought to the Vault of the Wardens on the Broken Isles.

In World of Warcraft: Legion, Cordana Felsong and Gul’dan retrieve Illidan’s body, and Gul’dan releases Illidan’s soul into the Twisting Nether. It is within the Nether that Illidan reveals to the remaining demon hunters that they must rejoin their cause to defeat the Burning Legion. He then states that the Illlidari will not be able to contact him again.

Illidan’s amber eyes were a sign of great destiny, but none could have predicted his demise. His lust for power overshadowed every other aspect of his life. Now, he flees his demon pursuers in the Twisting Nether, far away from Tyrande – but it’s safe to say that the high priestess is always, and will always be, in his thoughts.

For all of your World of Warcraft: Legion questions, visit Wowpedia.

Adventure Across the Land of Auria in Outward, a Truly Challenging RPG