With the 2016 World Championships approaching, we know that this latest patch is more for us causal players and less for the pros. These changes don't affect them, but that doesn't mean they aren't effective. Ping upgrades and some key nerfs will still apply to our trips to the Rift, so let's take a look at the latest League of Legends changes.

Arguably one of the best healers in the game, Soraka is known for her incredible ability to sustain her lane partner in the face of certain death. Her miracle heals have become a bit of an issue early game when it comes to counterplaying her. Diving or shooting through the heals and the space is tough, meaning she gets banned a lot, and when she slips through the cracks, the counter support choices available are limited. Something had to be done.

With her Astral Infusion cooldown being risen to 8/6.5/5/3.5/2 seconds from 4/3.5/3/2.5/2 seconds, the endless front of life support wont be so endless so early. The window of time for you to strike between heals is much larger earlier, so it won't seem so hopeless if you're not auto locking Blitzcrank or Leona.

The risk/reward nature of the Cantankerous Cavalier is pretty well realized right now, but now that he's had a few patches to be fully understood, he's starting to run away with even the slightest of leads. Especially with his crazy ult, CHAAAAARGE!, Kled is becoming the sort of character who is filling his own gaps, ganking his own lane, and giving his allies too much space to jump into his super boosting wake to join his fight.

When underachieving in lane, the lead almost feels insurmountable. Getting back on Skaarl, once dismounted, can feel completely impossible since the risk while farming is great.

They've normalized his damage while off of his mount, meaning he no longer does 20% less damage without the lizard. Hopefully this makes the rhythm and timing of last-hitting more predictable, and it will make Kled a bit more dangerous in trades, as his attacks are ranged while grounded. His ultimate is a bit less powerful, though. As the damage now scales with level, so does the range. It starts at 3,000 units and works its way to max, instead of starting at 4,500 immediately. The window of time that his wake stays on the field has decrease to 6 seconds from 8, so if his allies are gonna charge with him, they need to choose to do so quickly.

In a bold move, Riot is doing something it's never really done before. When they remade Kog'Maw into the wild auto-attack dispenser he is now, not even the most brilliant of designers could have envisioned his upside being so crazy. It's not even that it was TOO good. Even if he could reach five attacks a second(!), the unprecedented damage output only made him more one dimensional than ever. 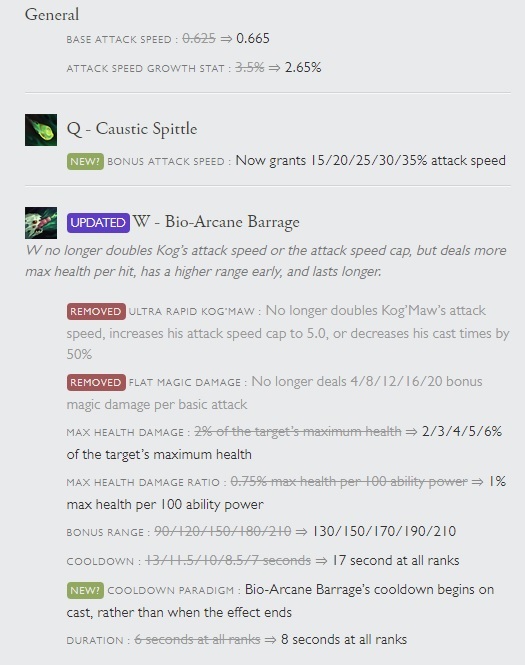 Either he would stand in one place and shoot holes into the entire team or he would get leaped on and murdered immediately. He was the glassiest of cannons, which didn't really fix the problems that the rework hoped to fix. Instead, it just provided new ones.

So they're reverting the changes almost completely to pre-season 6 Kog.

A few notable changes have come to the meta systems we interact with to play the game. The first is that summoner spells all have a 15 second cool down at the start of the match (except Smite). So you don't have to be that guy who accidentally flashes into a wall while typing "glhf" in /all chat.

Many more HUD pings were added, which is great considering how brilliant HUD pings are. Joining the initial wave of pings are now summoner spell cooldowns, passive cooldowns, experience, current gold, etc. The more tools to keep a pick-up team informed, the better any given round of the game can potentially be.

Running with that idea, Riot is implementing pings for the Item Store, too. Now, you can ping items to let the team know how much gold you need to buy it. Super useful when you need to let your ADC know why you don't have a Sightstone yet. You can also sell stuff just by right clicking the items in the shop's inventory window. Streamlined selling is the best selling. 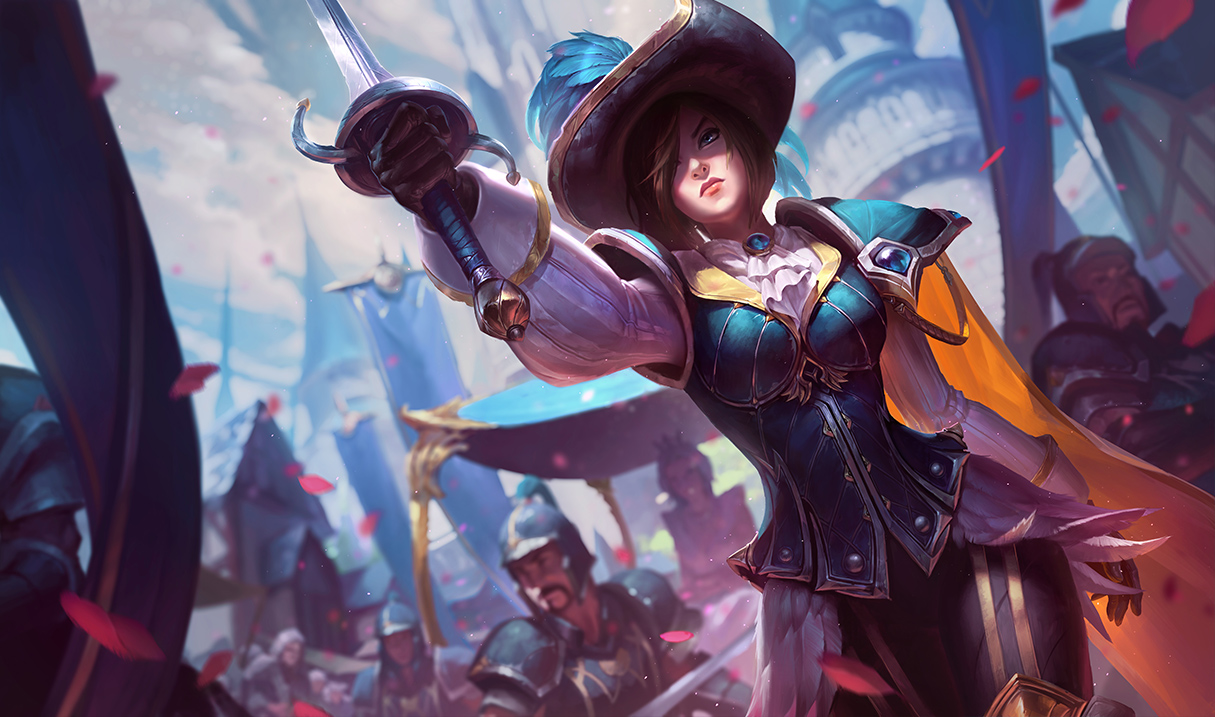 No new skins, but two of Fiora's splashes are getting new Tencent redraws. Royal Guard (pictured) and Nightraven splashes will look as shiny as most of the rest of them now. Cottontail Teemo is getting new splash art as well.

With Worlds upon us, the patches will begin to look more and more barren, but that doesn't mean the changes won't make a difference to us! Let us know how they're affecting your game on Twitter and Facebook. Keep up with the scores and happenings during the Championships at the Leaguepedia.

The 5 Most Important Things to Know About League Patch 6.17

Make Noxus Great Again With This Comprehensive Guide to Kled