You may have missed it amid all the excitement for the Switch, but Nintendo’s special presentation also included a massive, brand-new trailer for The Legend of Zelda: Breath of the Wild, showcasing tons of new characters, locations, enemies, and races.

It’s a lot to take in, and it's easy to miss some big details from the trailer. Luckily, we’ve spent our day pouring over wikis, Reddit posts, and trailer breakdowns to make sure we picked up all the pertinent details. Now we’re going to tell you all about what you might have missed in the Breath of the Wild trailer! 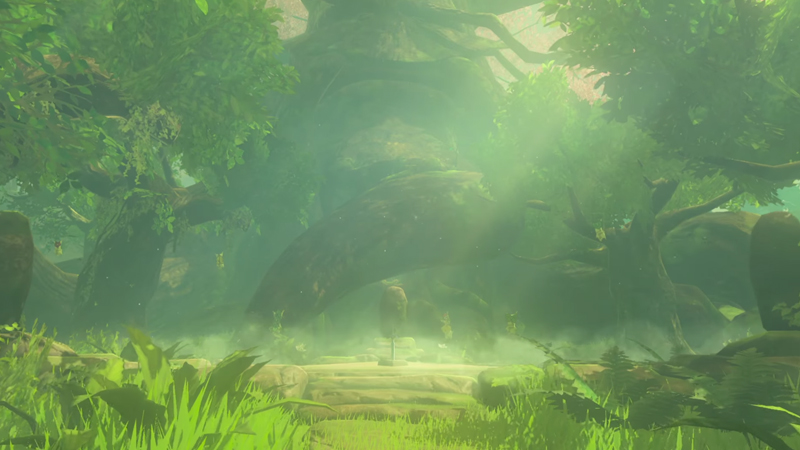 1. Return of the Deku Tree

The focus was on the returning Master Sword in these shots, but standing over the iconic weapon is none other than the guardian spirit of the forest, the Great Deku Tree. He housed the first dungeon of Ocarina of Time, and he appeared in Wind Waker along with the Koroks, who have made frequent appearances in other Breath of the Wild media.

Many of the Koroks appear to be the same as those from Wind Waker—does that mean it’s the same Deku Tree from that adventure? If so, will fans finally have confirmation that this great tree is the same as the Deku Sprout from Ocarina? The mysteries deepen! 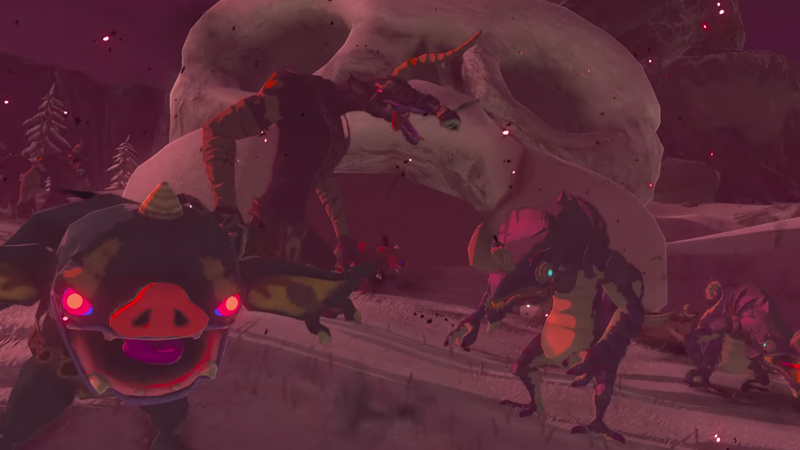 “Calamity Ganon” is among the greatest villain monikers ever devised, but his precise role in Breath of the Wild—beyond end boss and world-destroying personification of evil—is still a bit cloudy. But the latest trailer does offer some clues.

Here and there throughout the footage, you can see bits of oozing, purple goo. Isolated, you might take that to be just a bit of evil background art, but in aggregate, it seems to be an indication of the spread of Calamity Ganon’s power. You see it at the edges of the corrupted Hyrule Castle, especially around destroyed guardian statues, and among dungeon-like mazes. There are also indications of the purple ooze spawning moblins for Link to fight. 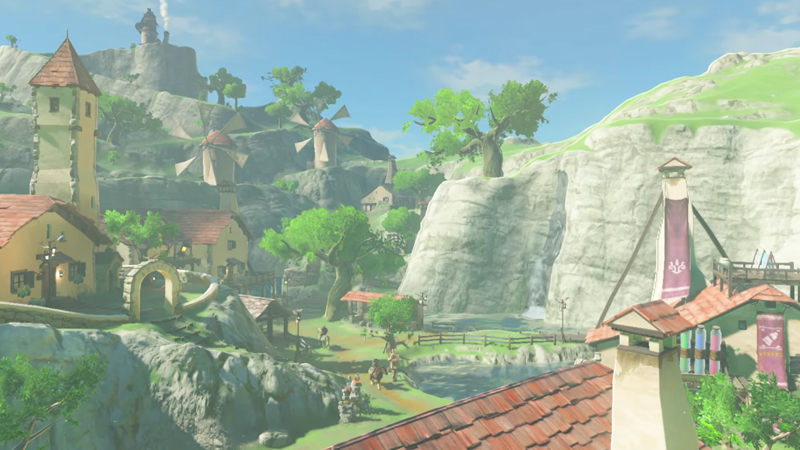 3. Life in the Ruins

One of the big concerns after last year’s massive E3 demo was the emptiness of Breath of the Wild’s world and the general lack of NPCs. But the latest trailer has confirmed pockets of civilization in some very exciting locations. The first is a town in a wooded mountainside location. Between the architectural style, layout, abundance of windmills, and the conveniently-located potion shop, we can’t help but comment on the village’s resemblance to Kakariko in Ocarina of Time.

That’s not all, though, as there’s a very cool desert town also represented. This location is built under a massive spring in a strange rock formation, which runs down into a huge aqueduct system that spans across all the rooftops. The Gerudo symbol is emblazoned on the city’s gates, and this—combined with a dark-skinned, red-haired character seen later in the trailer—means we’re finally seeing the return of an iconic Zelda race not seen since the N64.

We’d also be remiss if we didn’t point out the return of the Gorons and Zoras, each of which appear multiple times throughout the trailer in Link’s company. Despite a world-ruining catastrophe, it seems Hyrule isn’t so sparsely populated after all. 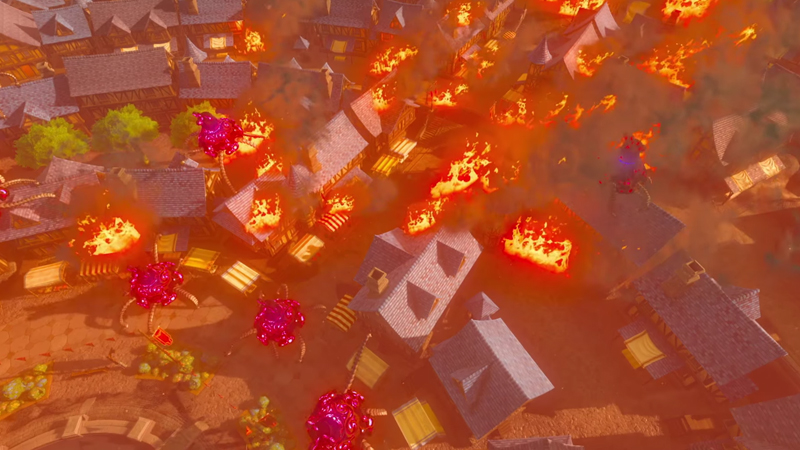 The mysterious calamity enacted by Ganon 100 years before the events of Breath of the Wild will clearly be a major element of the game’s story, but this trailer made clear we won’t just hear about it—we’ll see the destruction enacted first-hand. We see an army of purple-corrupted Guardians overrun Hyrule Castle Town (which incidentally bears a strong resemblance to the layout from Twilight Princess), setting the city ablaze.

If that weren’t indication enough that we’d be seeing the calamity in flashback, there are also a series of scenes featuring Zelda in a pre-destruction Hyrule. One shot shows her in a white dress looking out at (an uncorrupted) Hyrule Castle, and other scenes show her in that same dress escaping along with a battered Link from that same Guardian army. It certainly seems that this incarnation of Link and Zelda were connected before the calamity. 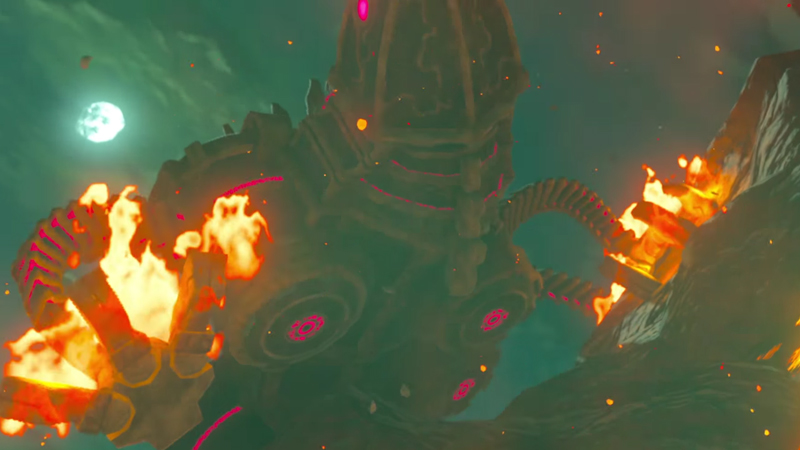 The trailer shows off two massive mechanical creatures similar in design to the Guardians. One is a lizard-like construction on a great mountaintop, the other a much taller thing that’s lumbering through a valley or desert. These join a bird-like monstrosity that appeared in an earlier trailer. What do these three have in common? They all appear on the mysterious map included with the Special Edition of Breath of the Wild, alongside Calamity Ganon and a fourth, elephant-like mechanical creature.

We might speculate that these are the four main bosses you have to defeat to reach Hyrule Castle, because along with their connection on the map, another shot in the trailer shows four corrupted pillars protecting Calamity Ganon’s stronghold. But it’s actually much more interesting than that.

Several shots also show massive, dungeon-like areas that are filled with spinning gears, and in one case an entire spinning room. Given the size of the robots, their purple corruption, and the similar corruption visible in these rooms, there seems to be one clear conclusion—these mechanical monstrosities are actually Breath of the Wild’s main dungeons.

This trailer was full of exciting details for Zelda fans, and I hope we’ve shown a few details you might’ve missed. It would be tragic if I didn’t point out my debt to Zeltik’s excellent trailer analysis on YouTube, and I highly recommend checking that out—along with our friends at Zelda Wiki—if you want even more nitty-gritty detail on Breath of the Wild.

What was your favorite part of the trailer, and what are you looking forward to most in Breath of the Wild? Let us know down in the comments!