We still play in a League of Legends climate that requires significant reaction to the changes made during and before preseason. Patch 7.3, like that patches before it and at least one more after it, focuses on adjusting some of the champions most affected by the changes. Like junglers (again), assassins (again), and Camille (again). There are some new things, too!

It's been a long time coming, but finally Riot has concrete plans of implementing their practice tool. Like a training mode in fighting games, the practice tool is designed to be a space to gain a further understanding about particular mechanics of your game. It's the perfect place to practice basics like dueling or wave clearing (maybe even with these champions). "As League gains more and more similarities to a sport," say Aeon & L4T3NCY, "it makes sense that there be a place where you can go to shoot hoops!" Great point.

The tool will allow you to constantly refresh particular states of play to practice specific maneuvers over and over again. Respawn the jungle camps so you can run your clear path faster. Teleport straight to targets to cut out the travel and get straight to the dueling. The full list of commands are listed in the practice tool announcement post. Personally, this is one of my most anticipated additions to the game in a long time. I'm very excited to give this a spin and improve my game.

The jungle keeps appearing in the patches in some form or fashion. Since the assassin and jungle updates, Riot has opened the Pandora's Box of savage gankery. The jungle itself isn't on the menu here, but some of its top performers are.

Kha'Zix has been bugging lots of people since his position as a bursty isolater was reinforced through some added flexibility. Kha is finding too much success in extended duels, though, and it's probably related to his Q's heavy attack ratio bonus and percentage of cooldown when he's cornered stragglers. Taste Their Fear's ration shrinks a bit, from 1.4 bonus attack damage to 1.2 bonus attack damage, and the cooldown refund goes to 40% from 60%.

Rengar is an absolute beast in the jungle nowadays. He often excels when players use his particularly finicky tools with precision, like being able to jump on targets, resist their crown control, and do high levels of damage long enough to kill and disappear. He's maybe too good at these things. 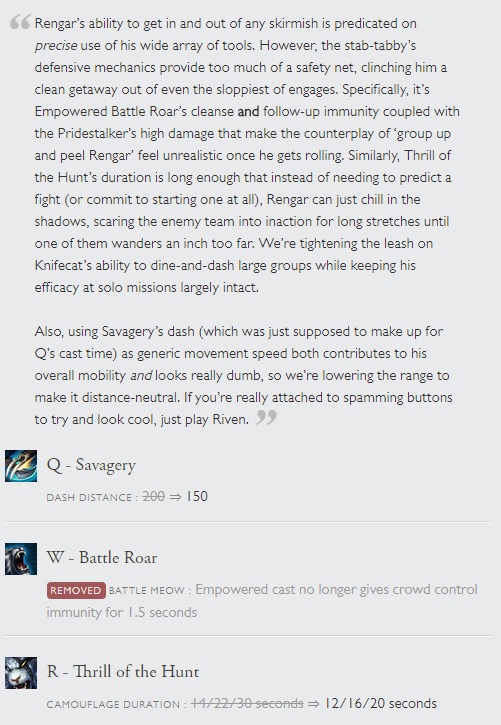 After experiencing maybe one of the worst starts of any new champion, Ivern has found a home in high damage team comps thanks to his incredible item efficiency and his ability to share camp buffs with his teammates. If there is any piece of his kit that is demonstrably out-of-sorts with his intended utility, it's the superior presence of Daisy, his big golem friend. Daisy's problem is that she has almost too much sustain, being able to come back from near death to smash another day thanks to Garen-levels of heath regen. Her entire regen hit is being taken from her; she will no longer regenerate health out of combat. Her armor and magic resistance has been snipped as well. Moving from 20/60/120 each to 15/40/90 will make her less durable to the onslaught of enemy fire.

Top laners are a proud bunch, known to participate in acts of team fight savagery that can only be accurately described as bloody brutal. They come in many forms; some are rough and tough brusiers while others are elegant assassins, but they are almost all designed to be in a fight to the bitter end. In this way, they all seem to get nerfed for the same reasons - their solemn nature makes the need to be a jack-of-all-trades that much more appealing. If you can engage, sustain, flee and dive all in the same package, then you're a bit of a golden goose among champions in that position. You're also a nightmare to balance.

Exhibit A: Camille, who's probably been in the patch notes every edition since she's been released. She's an assassin with crazy dive potential who can also defend herself against initial bursts from her targets for a short time. She can also trap and disable her pray, all while being able to escape should ganks come through. Even after multiple patches, shes still in this place of having "too many strengths."

Riot looks to adjust several pieces of Cammy's kit in hopes to create an environment where being slowed or disabled by her doesn't translate to a painful death with no counter play. 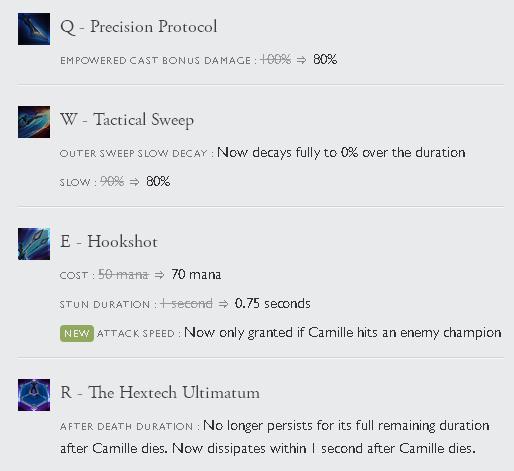 The same sort of problem persists with Jayce, who has seen a resurgence in pro play in the last year. He's been on the top of the heap consistently as far as ranked play this season. Ironically, being a do-it-all sort of champion is exactly what Jayce was designed for, so it's sort of awkward to punish him for doing his job so well, but here we are.

The specific bone that Riot has to pick with Jayce centers around his hammer form. More narrowly, the damage he's doing when he engages with it (normally right after transitioning it to hammer mode, getting the attack bonus). That bonus is getting curtailed, toned down to 0.25 bonus attack damage from 0.4 bonus attack damage. His Q, To the Skies!, takes a nerf too, going from 40/80/120/160/200/240 to 35/70/105/140/175/210. Thundering Blow's mana cost rises to 55 from 40. All of this is to pass some of the heavy lifting in Jayce's kit away from the hammer stance and into the shooter stance.  He can less reliably finish every fight he starts in hammer mode, and will hopefully feel a little less invincible when he engages.

LeBlanc has been a damn savage killer since the assassin update. She can out lane you, out farm you, and is elusive enough to stay plenty safe from roaming ganks until mid game, where she spikes harder than most champs in any of the lanes. Riot thinks that has something to do with her passive, Sigil of Malice, and the way it scales early game. With just two spells, the Deceiver can blow an enemy mid-laner off of the map in the early game, and that threat never gets any less scary.

The nerfs to her passive scaling from levels 1-6 and 7-13 should help to calm that early game storm.

Something funny has been happening since preseason, that has seen mid-lane mages migrate to the bottom lane to play support. The disruptive properties of many of these mages, like Ziggs' ability to displace people AND do tons of damage, is really throwing people off down there. Malhazar has benefited greatly from this shake up.

Scarizard makes a good point about mechanical intent vs reality. Mal's voidlings can be an oppressive presence in a lane, helping to clear while also serving as bodies to block skill shots. These tend to be balanced out by the natural dangers of being in a solo lane (like having to kill or survive an enemy who is solely focused on you). When you remove that need to stay focused, you can instead look to just exploit the annoying things you do to maximum effective trollishness.

Voidlings are almost too good at throwing skill shot heavy marksmen off their game, and chasing melee supports out of lane. It's a concept you never think about because you really never see them interact outside of teamfighting, but season 7 has introduced this brand of silliness to the masses. Riot is stepping in to change some of that by changing the way they act.

The Hunt of the Blood Moon

New additions to the Blood Moon skin set go live this patch and they are pretty good looking. Diana, Jhin, Talon, and Twisted Fate all get some pretty snazzy skins - but that's not all. Accompanying the skins is a brand new game type, The Hunt of the Blood Moon. In it, you choose from a short list of champions (all of which are assassins) on an alternate version of Summoner's Rift.

Instead of breaking turrets to get to the enemy Nexus, teams score points by killing enemies, killing floating spirits (who replace jungle camps), and killing demons (that replace Baron and the Dragons). The first team to 350 points is the winner, and the process is a high octane blood bath. Passive XP and gold gain is rapid, and characters are restricted to buy only traditionally offense heavy items (No Dead Man's Plate or Randuin's Omen for you). It's a pretty cool test of assassination skills and will be in rotation every weekend for the rest of the month. Give it a try!

For more information on Patch 7.3, including the client update and new scoreboard functionality, check out the full blog post on Riot's web page. And remember to check out Leaguepedia, the premier source for pro-LoL information.

LoL Patch 7.2 Puts the "Lethal" Back in Lethality, Revamps the Big Bad Wolf