Tom Clancy's Ghost Recon: Wildlands is the latest in the long-running military simulation series that prides itself on translating the relationship between tactical scenario assessment and the precise execution of modern day military operations. Ghost Recon has always stood out among shooters thanks to its emphasis on planning and preparation, and even with the massive changes present in Wildlands, the series still stays faithful to this creed.

In Wildlands, the Santa Blanca Drug Cartel has the citizens of the beautiful, tropical nation of Bolivia suffocating under its cocaine-fueled violence and terror. As a member of the Ghosts, the US Elite Special Operations team, you and your squad will work to free the country from the specter of El Sueno and his exploitative narcotics empire.

A tall order, to be sure - but we're here for you. We've compiled general tips, character information, weapon locations, and more in this extensive How to Play Guide. If you take the following information to heart during your first couple of hours in the wilds of South America, you'll be well on your way to establishing order in the chaos of Bolivia.

At the insistence of Karen Bowman, CIA Case Officer and Head of Operations in Bolivia, you and your Ghosts have been mobilized to deal with the cartel threat. Before you do that, though, you have to create your character. With dozens of options to choose from, the customization suite in Wildlands ensures that you can make your operator look super unique. It won't affect your load out, but style is a must when taking out terror, no?

You'll make consequential investments to your character when choosing Skills. Separated into the five different trees, your skills are what will transform your character from "guy with a gun" to "highly specialized one man wrecking crew." Skills cost both experience and sometimes other resources, so it's very important to find one or two branches of specialization and focus on them. Increasing your Weapons capabilities, raising your own personal stats like health in the Physical section, or making your Squad a more cohesive unit are all worthy investments.

Quick Tip: A solid skill set to invest in early is the Drone, as it can become an integral part of intelligence gathering eventually.

Speaking of your squad, your A.I. companions will be your bread and butter when it comes to assaulting compounds and eliminating targets across Bolivia. Especially before the bullets start flying, proper use of the your A.I. team will not only eliminate headaches, but make some of the more impossible missions far more doable. Sync Shot is among the most important ways to incorporate them into your strategy. While either targeting an enemy through your weapon's sights or from a drone, you can command your partners to fire on marked foes at your command. This is great for clearing areas with multiple bad guys in it at once. It requires skill points to unlock and make better, but it's invaluable.


Learn More About the Ghost Recon Wildlands Characters on the Wiki

It's incredibly easy to get lost in Ubisoft's Bolivia, with 21 districts and 11 ecosystems spanning miles and miles of verdant greenery and muddy shanties alike. Ubisoft has claimed that Wildlands' map is the biggest they've ever made. With rumor of the map being comparably bigger than the biggest open world games around, like GTA V or The Crew, this is no claim to simply scoff at. Besides the narco-terrorists themselves, the environment may be your biggest antagonist.

The map is also incredibly dynamic and eclectic, as far as the types of terrain are concerned. Some places are verdant and thick with raw, tropical jungle like Espiritu Santo. Other places are arid and dry like the salt flats of Inca Camina, or rugged and rough like the mountains in San Mateo. Your journey will take you and your squad through them all. 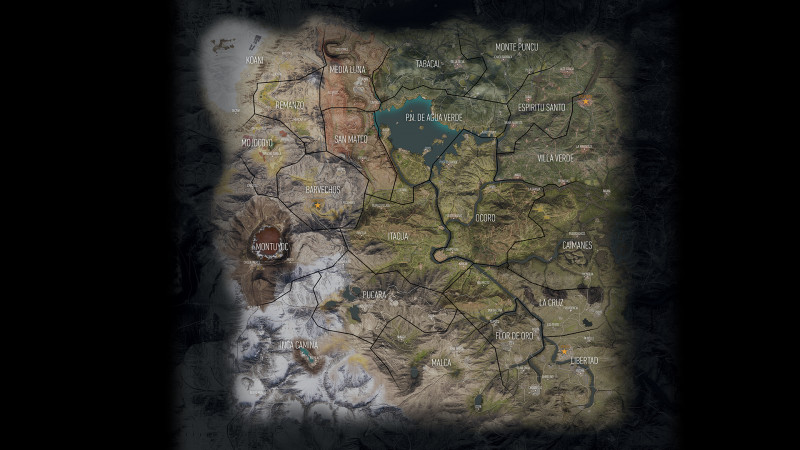 Your TACMAP will make traversing through this massive map a cinch. It shows you important points of interest on the map like mission and intel locations, and it will be your general information hub when figuring out what to do next. Your TACMAP also includes the difficulty of new regions, as well as side missions.

View All Provinces on the Wiki

The role your squad plays in Ghost Recon: Wildlands is simple: free Bolivia from the iron grip of drug-related terror. To do this, your team must find and take down the cartel kingpins dominating their respective provinces across the country. Though infamous, they aren't simply going to sit in the open and make taking them down easy. You must learn about each individual drug lord, understand how their operation in the area works, and identify exploitable weaknesses to bring it all crashing down.

In order to force each district's resident cartel drug lord out into the open, you have to collect intelligence and use this info to open up new, difficult missions. Cause enough static, and you'll either force the cartel king to run away or make him deal with you head on. Either way, he'll expose himself to your brand of justice.

The intel you have to find is scattered across the map, from the corners of shacks to desks of powerful cartel warlords. As you collect them, more of the district's cartel organization becomes clearer. The closer you get to the person in charge, the harder the new missions surrounding them get. You could probably just coast through the story missions available and get a significant amount of intel just through happenstance. If you really want to be thorough, though, you can make collecting all of that intel your priority.

The side missions tend to vary from "find an informant" to "rescue a hostage" to "assault this convoy." We found the convoy missions particularly challenging, as the amount of firepower being brought to bare from the bad guys is significant, especially early on.

Quick Tip: When starting out, focus on story missions. These main-track objectives will naturally take you to key places throughout Bolivia, give you access to vehicles and weapons organically, and help you collect XP rapidly. 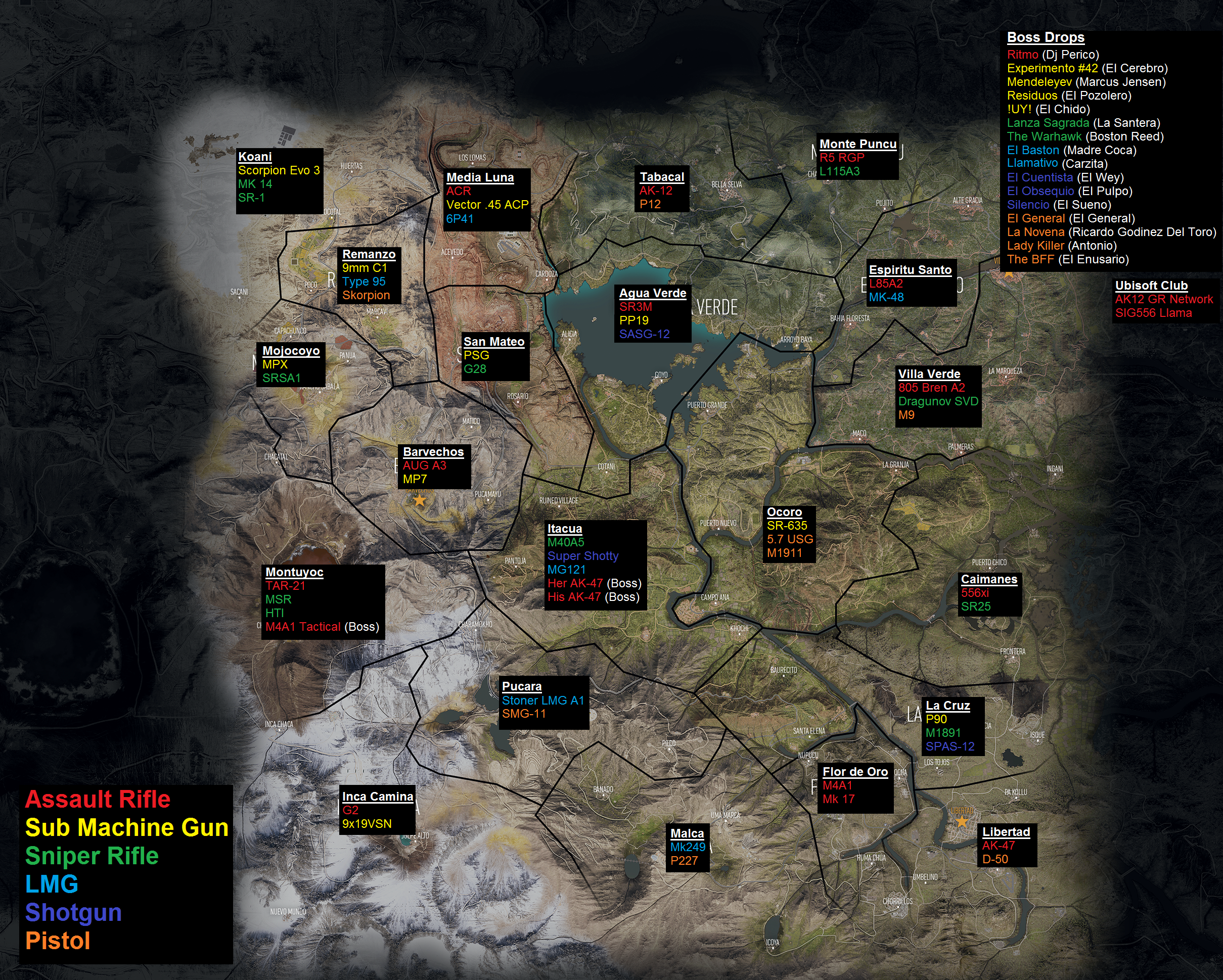 Gunplay is the primary language of your four man squad in Wildlands. The meta differences between sub-machine guns, assault rifles, pistols, etc. is pretty nuanced, and it is something you'd really have to learn through practice. However, there is a general consensus that assault rifles should be your main weapon, thanks to their mix of power and range, as well as myriad ways they can be customized to your liking. Guns like the MP5 have high rates of fire and can really do damage quickly when closer than mid-range, they lack the overall flexibility and usefulness.

Quick Tip: The pros of using a Silencer far outweigh the cons. You'll do less damage, but unless your target is heavily armored, you'll probably dispatch them with similar efficiency.

Thanks to Redditor, Orangu888, the maps above and below will help you find specific types of weapons in particular districts. They also highlight the drops you can expect to receive from particular boss characters.

Outside of guns, there are other pieces of useful equipment worth investing time and resources to upgrade. Your drone is probably the most useful of them. In the beginning, your drone is a short range, low altitude scout. It flies over the immediate area and marks enemies for dispatch, as well as resources and intel to gather. Upgrading it will increase the range and battery life, but it will also turn it into a weapon in its own right. Pretty soon, you'll be sticking C4 on remote targets or dropping literal bombs on difficult foes.


View More Weapons on the Wiki 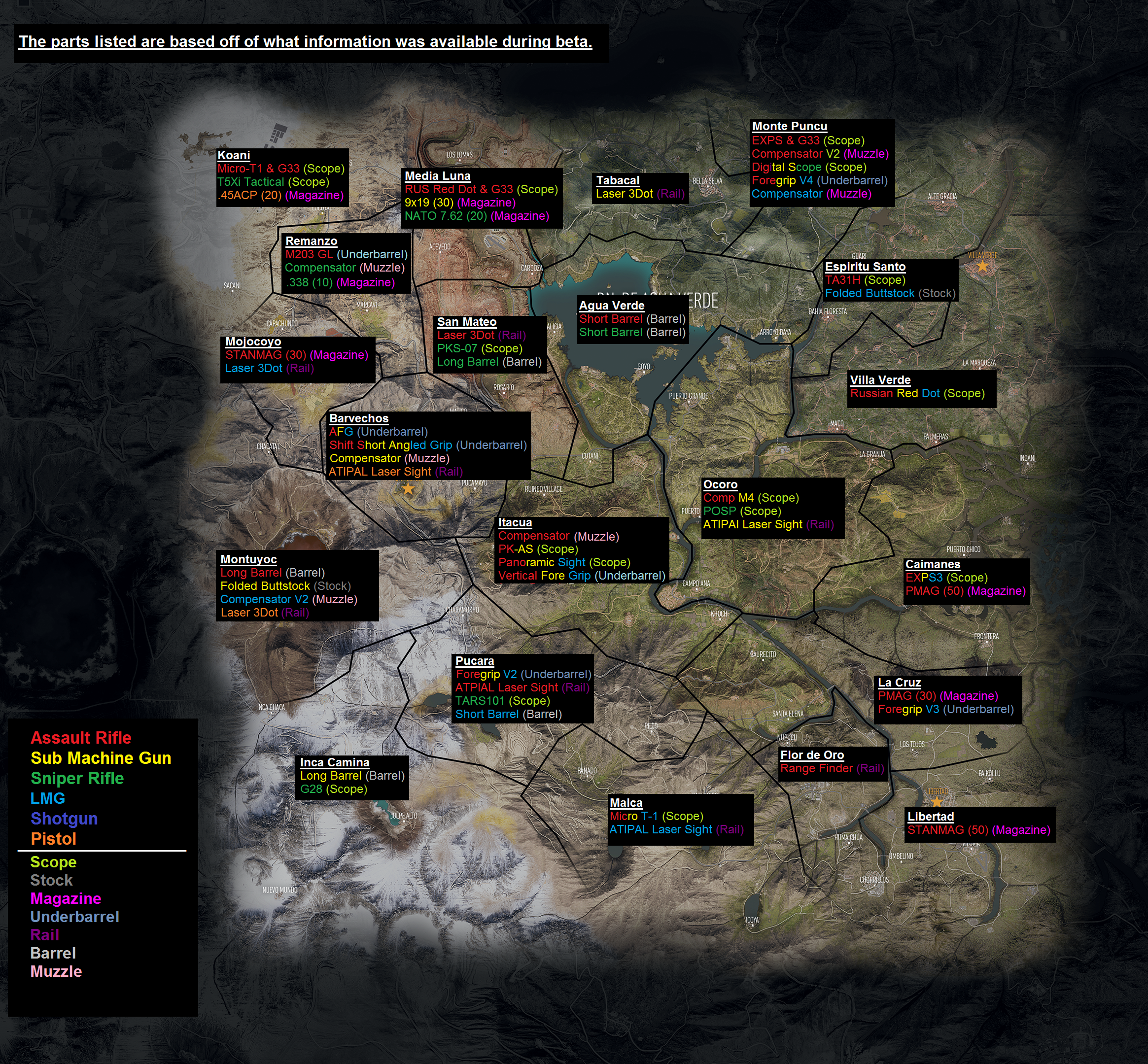 Your enemies come in two basic flavors. On the orange team (highlighted in that color on the mini map) are cartel thugs. These are your average gangsters that are aggressive, reckless, and often haphazardly equipped. They are dangerous, as anyone with a gun is, but standard cautionary tactics would make the process of clearing them out easy. On the purple team is UNIDAD, high-powered mercenaries who should probably scare the crap out of you every time you see them - especially early on, because they are almost always well-armed and show up to kill with extreme prejudice. These folks will take a special amount of focus to dismantle, and they will increase patrols of the areas you're in if they get killed regularly.

Quick Tip: UNIDAD forces are more dangerous foes, but killing them could give you access to higher-end vehicles and weapons.

The most basic and effective tactic against both types of enemies is stealth, a standby strategy that is common in all Ghost Recon games, and especially helpful in Wildlands. The less opportunities you provide the enemy take shots at you, the better the chances of them not killing you. Enemies not being aware of your presence as you pick them off one by one is the most ideal manifestation of this. With the open world nature of Wildlands, it can sometimes be difficult to stay completely stealthy for the extent of a mission. With traffic passing by some areas and eyes watching from all angles, being seen is often just a matter of time. The more time it takes you to kill alerted enemies, the more time they have to call reinforcements.