The fate of the Andromeda Initiative rests in your hands as the Pathfinder in Mass Effect: Andromeda. Although the mission has always had a preference for peaceful coexistence with the species of the Heleus Cluster, there will no doubt be instances where you are left with no option but to draw your weapon. This Combat Guide represents the most up-to-date info we have on combat in the Andromeda galaxy. The conflict there is tense, brutal, and fast - but it's nothing you can't handle as as the young upstart Ryder. 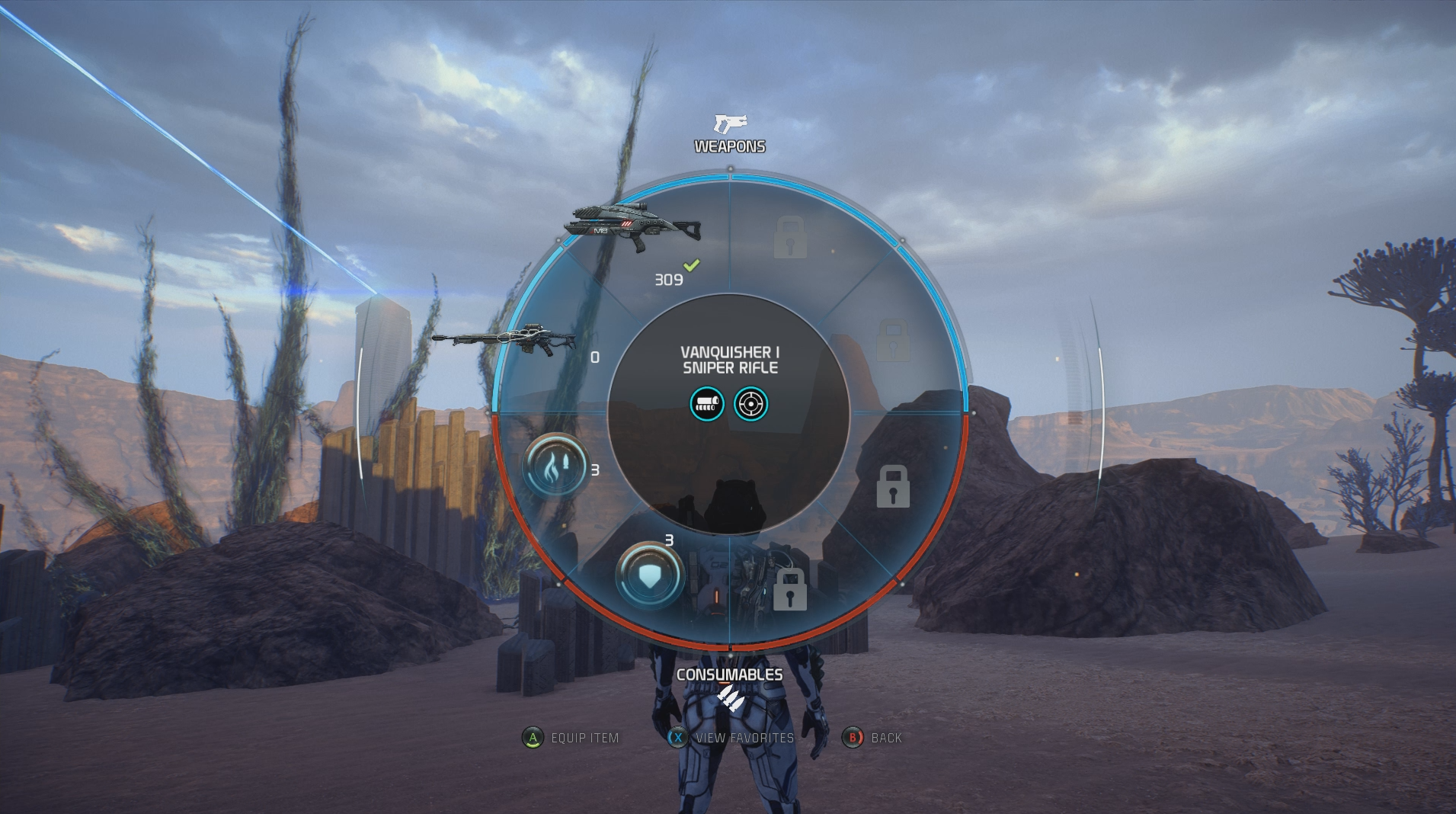 Andromeda has made a concerted effort to make combat feel faster and more fluid than in previous Mass Effect titles. As a result, many options have been streamlined, AI has improved, and combat is more deadly than ever. Perhaps the largest change is the fact that the only way to pause combat is by opening the weapon wheel. Gone is the tactical pause function from the Original Trilogy where squadmate abilities could be queued up manually. However, squadmate command keybinds do still exist and function well thanks to an improved AI.

Another added feature to speed up combat is the automatic cover system. When Ryder approaches a wall or piece of debris that is functional for cover, he or she will slide smoothly behind it. Varying sizes of cover also means that you'll encounter sub-par cover that offers below-average protection. This makes scouting out a perfect tactical location more important than ever. Additionally, blind fire from behind cover is possible, adding another tactical dimension when trying to recover your shields. 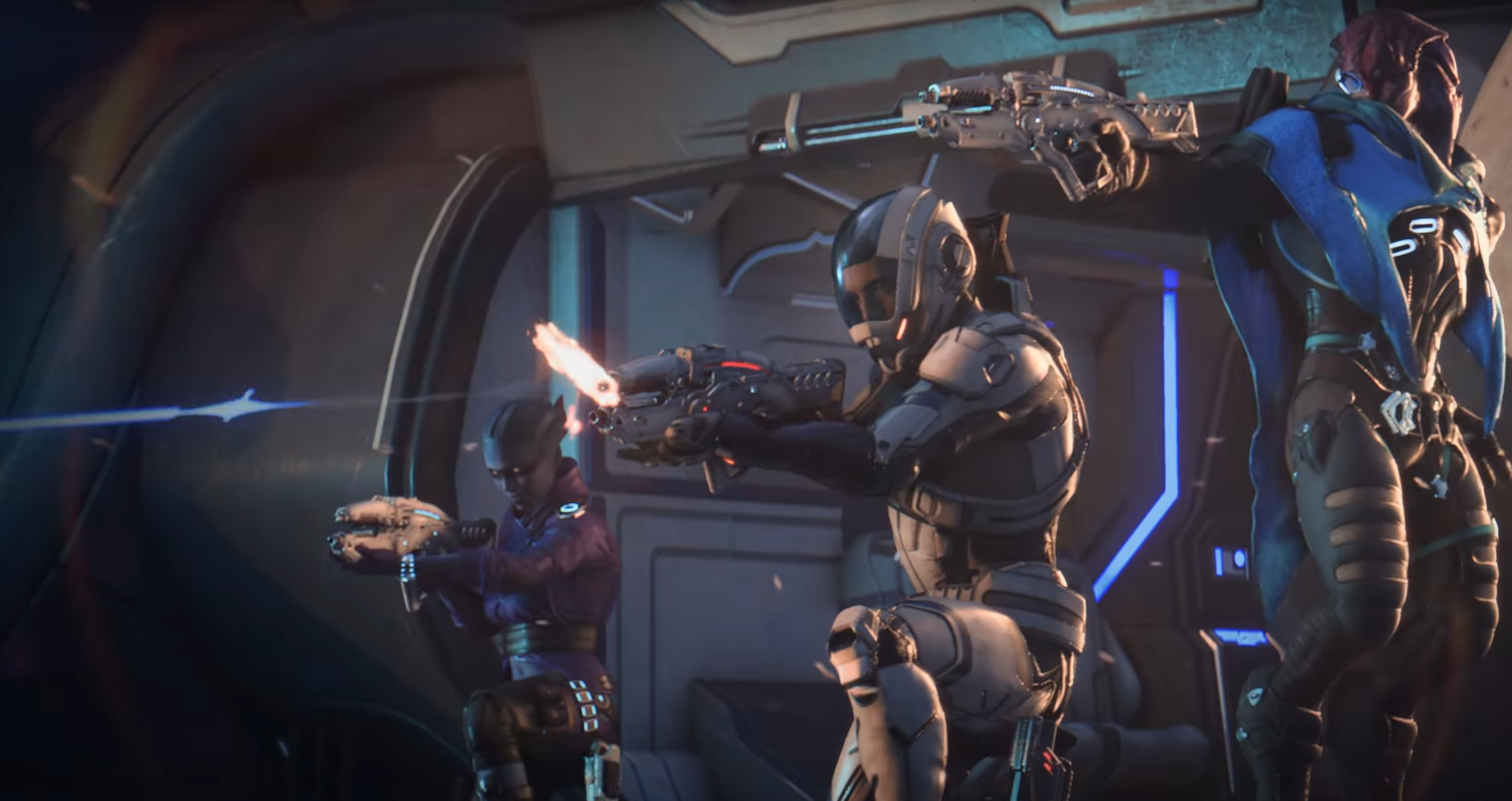 Weapons have gotten more love than ever before in Mass Effect: Andromeda. Thanks to an intensive crafting system and new species to gather technology from, finding your perfect killing machine will be a piece of cake. When out pathfinding, there are five weapon loadout slots available to you. At the start of the game, 3 of these slots are unlocked. You can unlock the remaining two slots by advancing the Combat Fitness skill.

Weight still exists as a mechanic and functions similarly to how it did in Mass Effect 3, by lowering power recharge speed. This means you should be wary of how many weapons you're carrying and what their weights are. One of your loadout slots is dedicated to melee weapons, whereas the 4 remaining slots are mix-and-match for whichever weapon type you desire. For example, if you are proficient with shotguns but want to carry 2 different kinds for the sake of variety, now you can! The only exception is that you cannot carry 2 versions of the same gun.

Unique melee weapons are the newest addition to the series. These dangerous devices are variable in appearance and function, ranging from a Krogan Hammer to a flaming Kett sword. Biotic amps have also joined the Omni-blade as potential melee implements. Melee weapons don't need to be equipped via the weapon wheel - they're automatically used when hitting the melee button.

Quick Tip:  Want to change your weapon loadout? You’ll be prompted to do so when leaving the Tempest. You can also change your loadout at a forward station.

A recent favorite design choice of the BioWare combat design team, combos are present and more important than ever in Andromeda. Similar to Mass Effect 3 and Dragon Age: Inquisition, combos consist of 2 parts: priming and detonating. The Andromeda system is very similar to ME3's system, with 4 types of primers, and only a single detonating type. The global cooldown for powers has also been removed, making completing power combos even easier than before. If you want to prime a target with Invasion and follow-up immediately with Lance for a Biotic explosion, then it's your playground. The primer used on an enemy determines the effect that happens when detonated, and these effects are listed below:

Executing combos will be very important for AoE controlling of enemies in Andromeda.  It's both more functional and impactful than previous systems, and companions are more effective than ever at effectively priming and detonating. 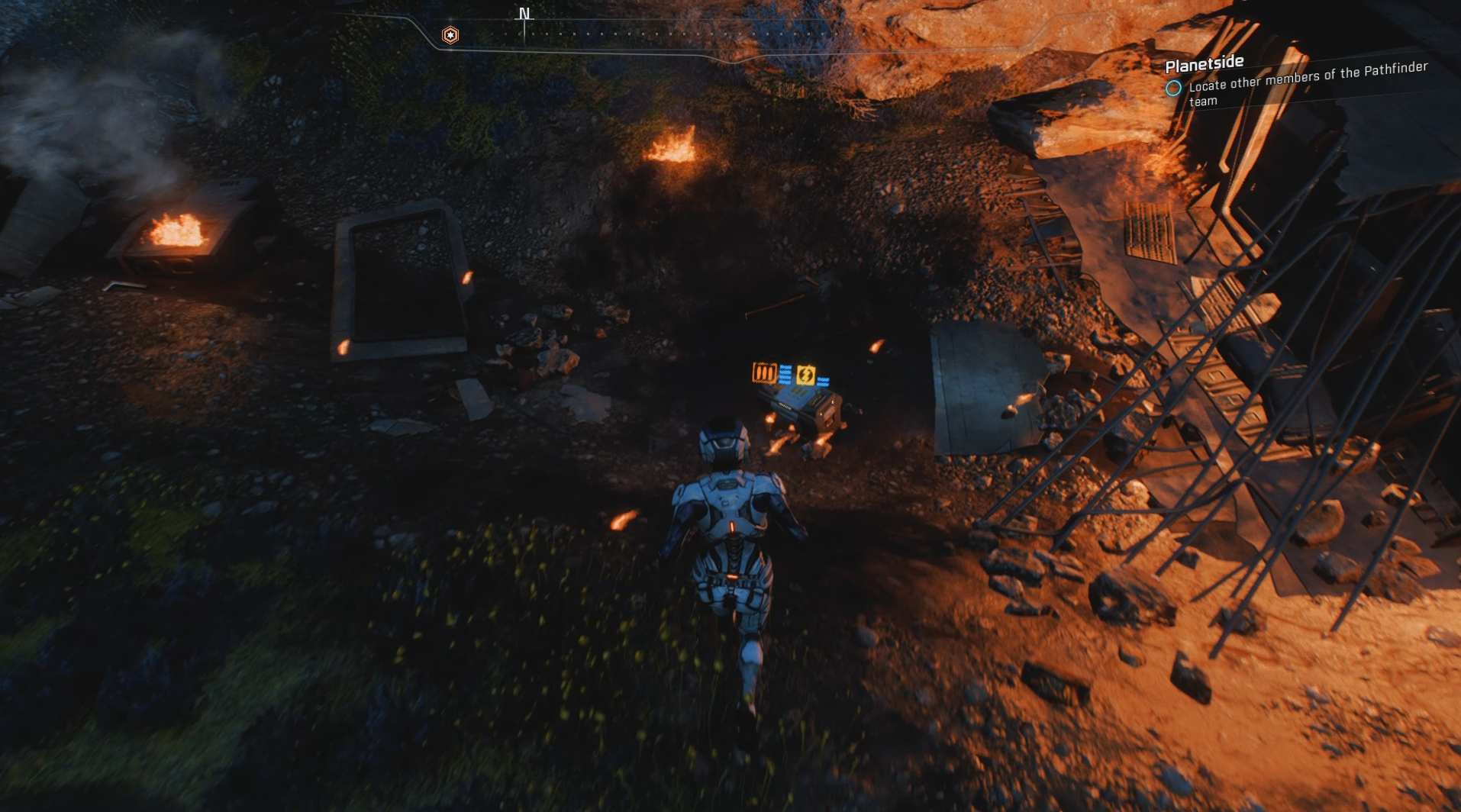 One of the biggest balancing issues of any game is the recovery of resources. Constantly regenerating health, a trademark of 2000s console shooters, has issues due to the lack of urgency in combat. If ammo is littering the floor, you have no reason not to simply spray-and-pray. Andromeda has made some bold attempts to redefine this gameplay loop.

Much like omni-gel, medi-gel appears to have weakened over time in the universe. It's no longer a process of simply stockpiling the useful goopy stuff for hard times. Instead, the main way health is regained is through supply caches marked with a red circle. In addition, certain powers are charged based (such as the Omni Grenade) and must be refilled. Boxes often contain ammo, and caches with lighting-bolt symbols represent the opportunity for refilling these powers. 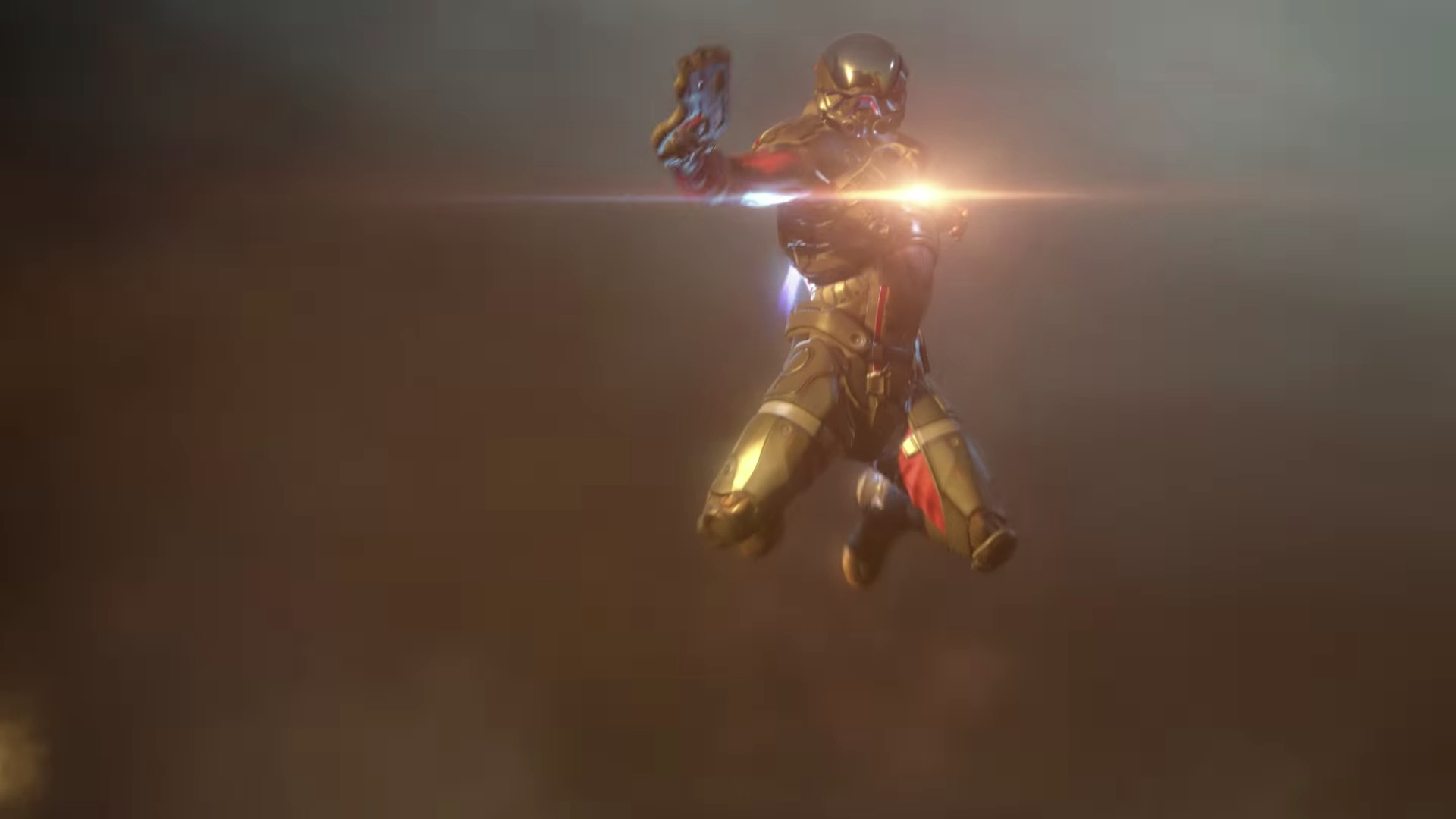 Potentially the most hyped addition to Andromeda, the Jump-jet plays an important role. When jumping or falling in combat, targeting your weapon with the corresponding key will cause Ryder to hover for a short time. While hovering, you can do 4 awesome things: 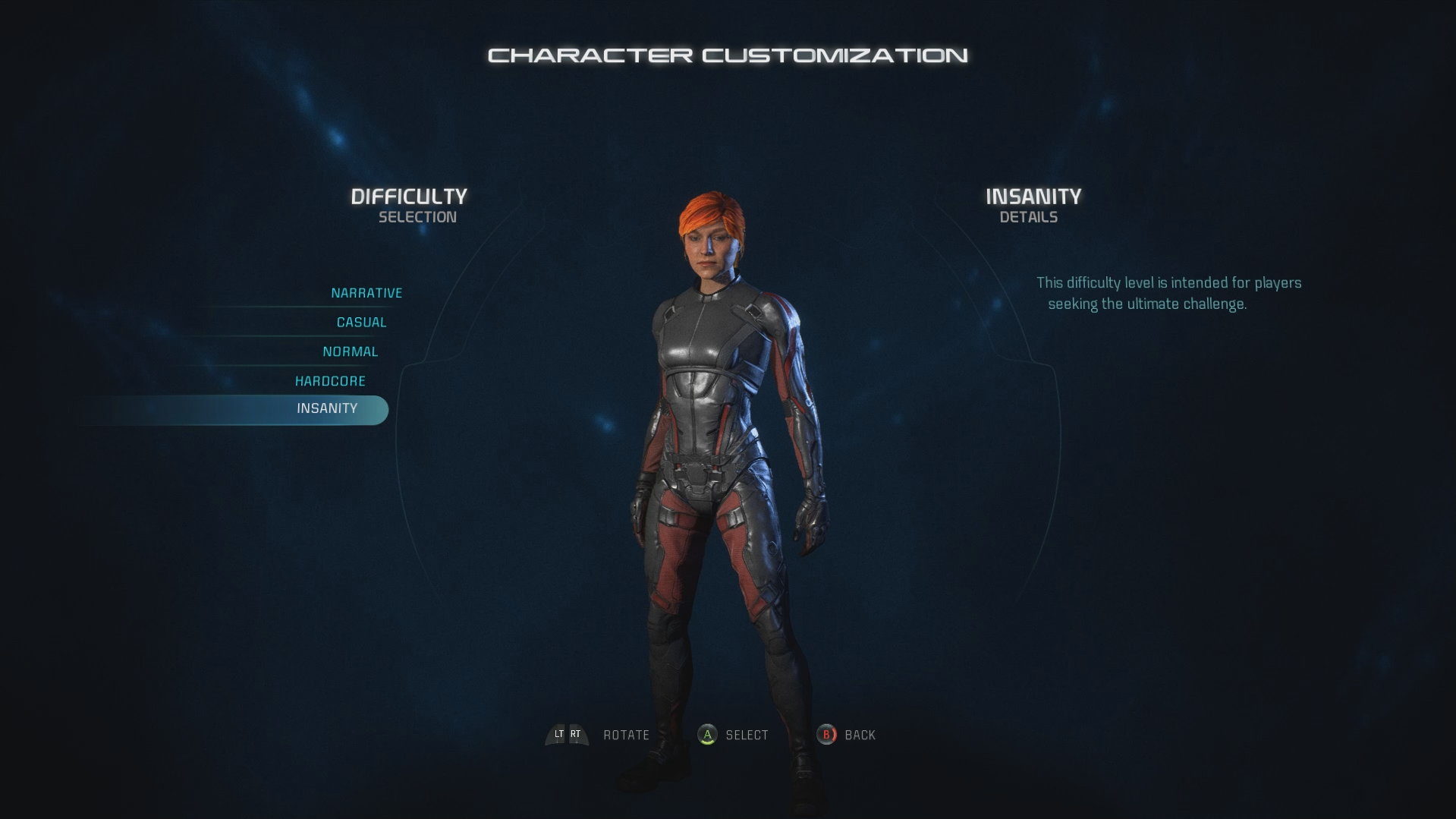 Andromeda comes standard with several different combat difficulty levels. Regardless of your gaming experience, you should be able to find a happy place for your playthrough. Mass Effect: Andromeda difficulty levels include:

Combat is shaping up to be a frenetic and tactical experience in Mass Effect: Andromeda, and it will take all of the resources at your disposal to carve out a home for the Milky Way races.

Bryan previously worked with Beyond the Summit and helped develop game features such as Teamfight Recap. He now lives in Alabama with his wife and works as a freelance production assistant and writer.