Tim Conkling and Versus Evil’s Antihero is a turn-based strategy game set in a city Queen Victoria would love - aside from the mean streets that she would surely disavow. At the helm of your own burgeoning Thieves Guild, you assemble a posse with one goal in mind — rob everyone blind. Be it by stealth or skulduggery, you fight to dominate the darkness, and pilfer your way to the top - and this How to Play guide will help you do just that.

Of course, it’s never that simple. You’re not the only ne'er-do-well out in search of profit and power. Rival Guilds, ruthless gangsters, and corrupt nobility revel in the chaos, and they consort to cheat anyone in their way. The race to dominate the underworld of the Industrial Era is on, and whether you steal, bribe, or stab your way to glory is completely up to you. 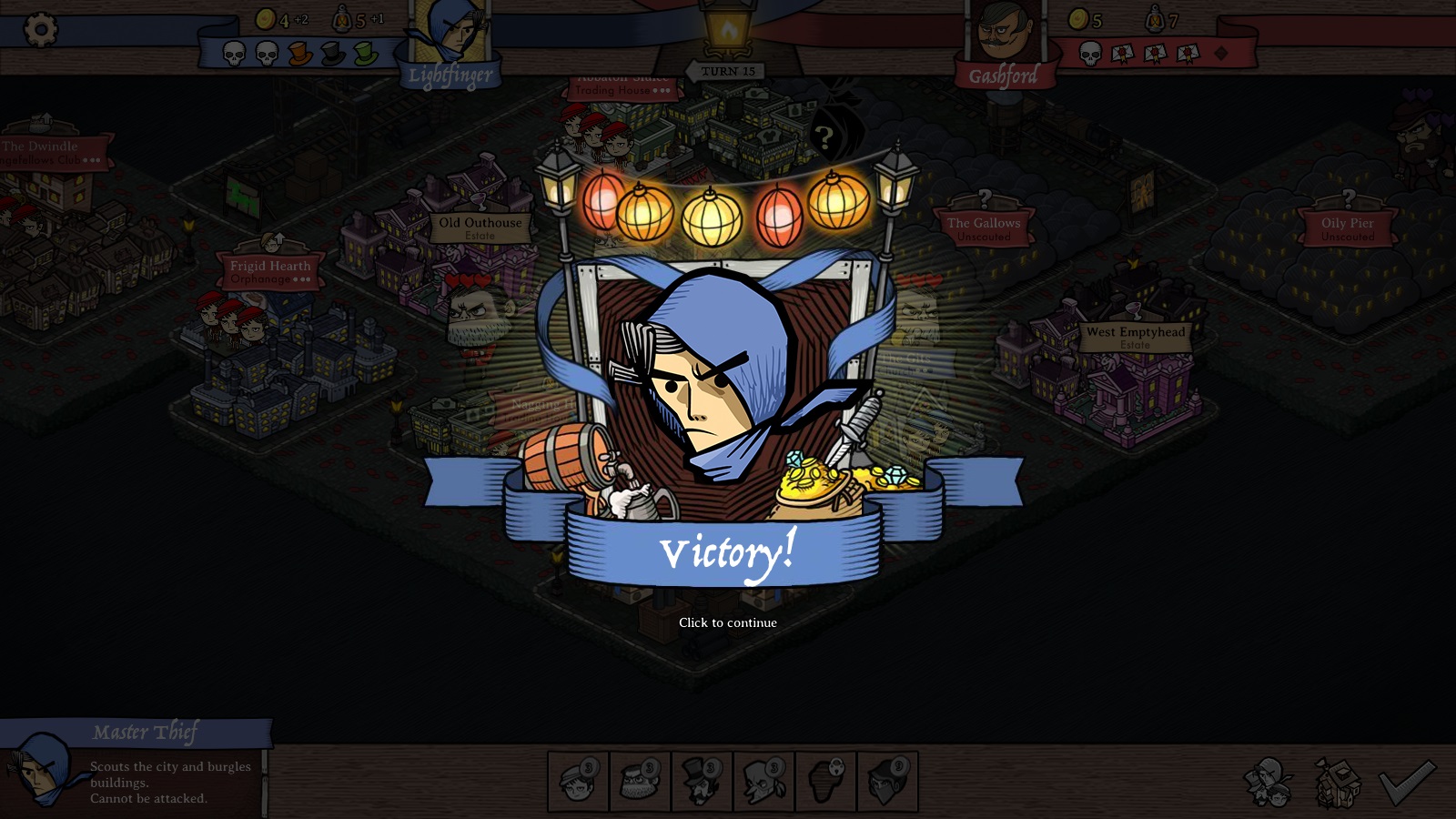 During a turn of Antihero, your goal is to expand your Guild’s influence over the map by any means necessary. To do so, you’ll need to have a firm grasp of certain key elements of gameplay.

There are two types of currency that you’ll be stealing, earning, and spending in Antihero: Gold and Lanterns.

Gold is primarily used to buy units. The easiest way to earn this particular resource is by burgling buildings on the map. It can also be earned by infiltrating certain Businesses that will provide you with Gold bonuses every turn. Lastly, you can kill for Gold, as every slain enemy unit will drop money after their death. More advanced units can be very pricey, so it's crucial to balance the money you spend on muscle and utility against the money you earn doing dirt.

The second type of currency, Lanterns, is used to buy upgrades. Specific districts produce lanterns every turn, so you can increase your reserves by infiltrating these areas. They can also be stolen, and even earned passively if you take the Lamp Lighters upgrade. This might be a smart investment, as upgrades are a one-time expense, and the benefits they offer can’t be taken away from you. Lanterns can also be spent on certain victory conditions, which we will get into later.

Quick Tip! If you decided not to buy an upgrade one turn, you can instead take Charity. Charity allows you to choose between gaining four Gold or two Lanterns instantly.

Every time you spend either currency on a unit or upgrade, the price of a subsequent purchase goes up. This means that every time you spend Lanterns on an upgrade, you will have to spend the asking price plus one next time around. It's a similar story when it comes to money, but this “tax” is only incurred when buying multiples of the same unit. Be sure to diversify your investments! 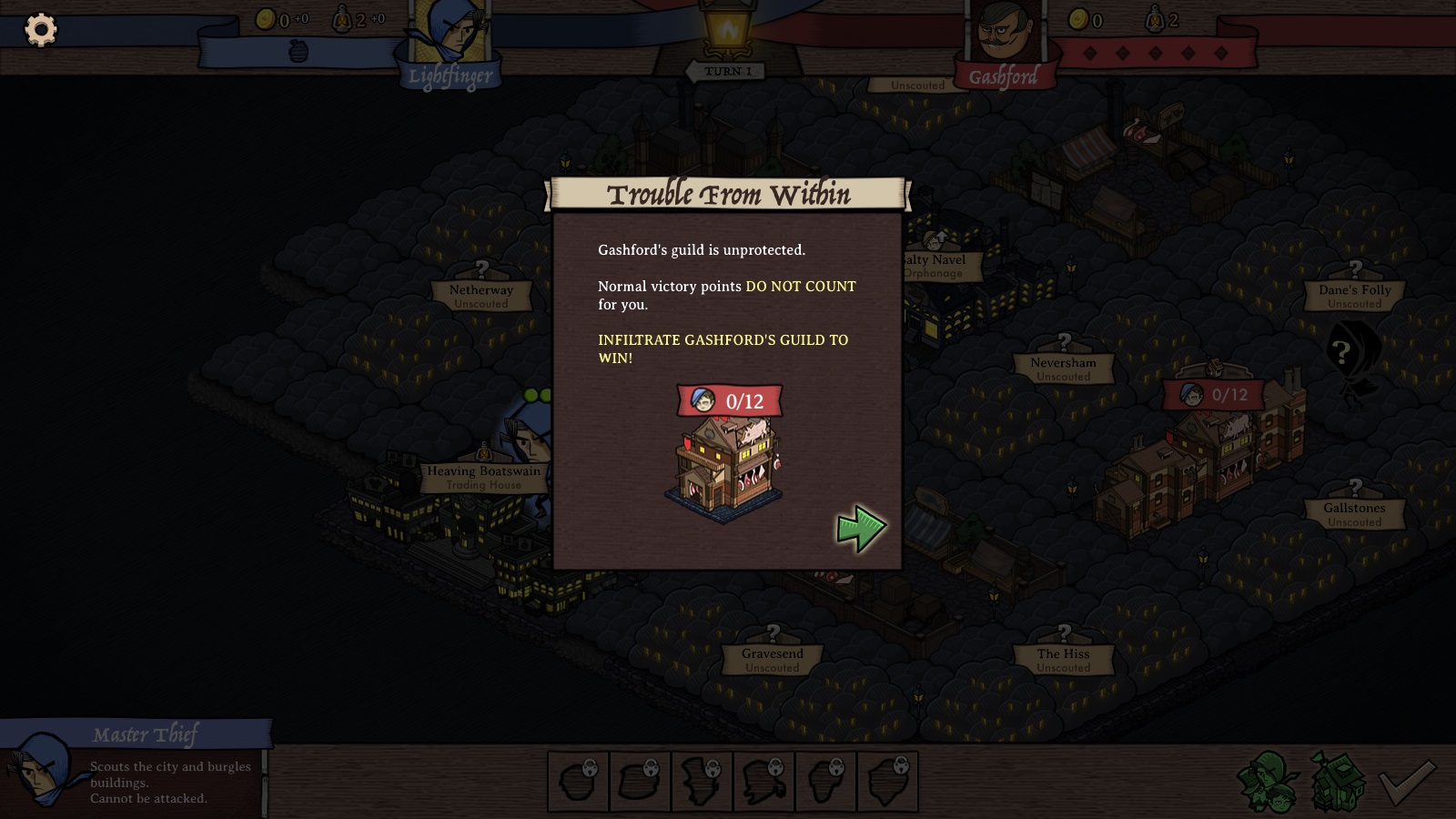 With very few exceptions, there is no one way to win a match in Antihero. In fact, not only are there a variety of paths to victory, but success on each map typically requires a blend of different approaches. The first player to reach the necessary amount of Victory Points wins the game. There are a few ways to score these points: 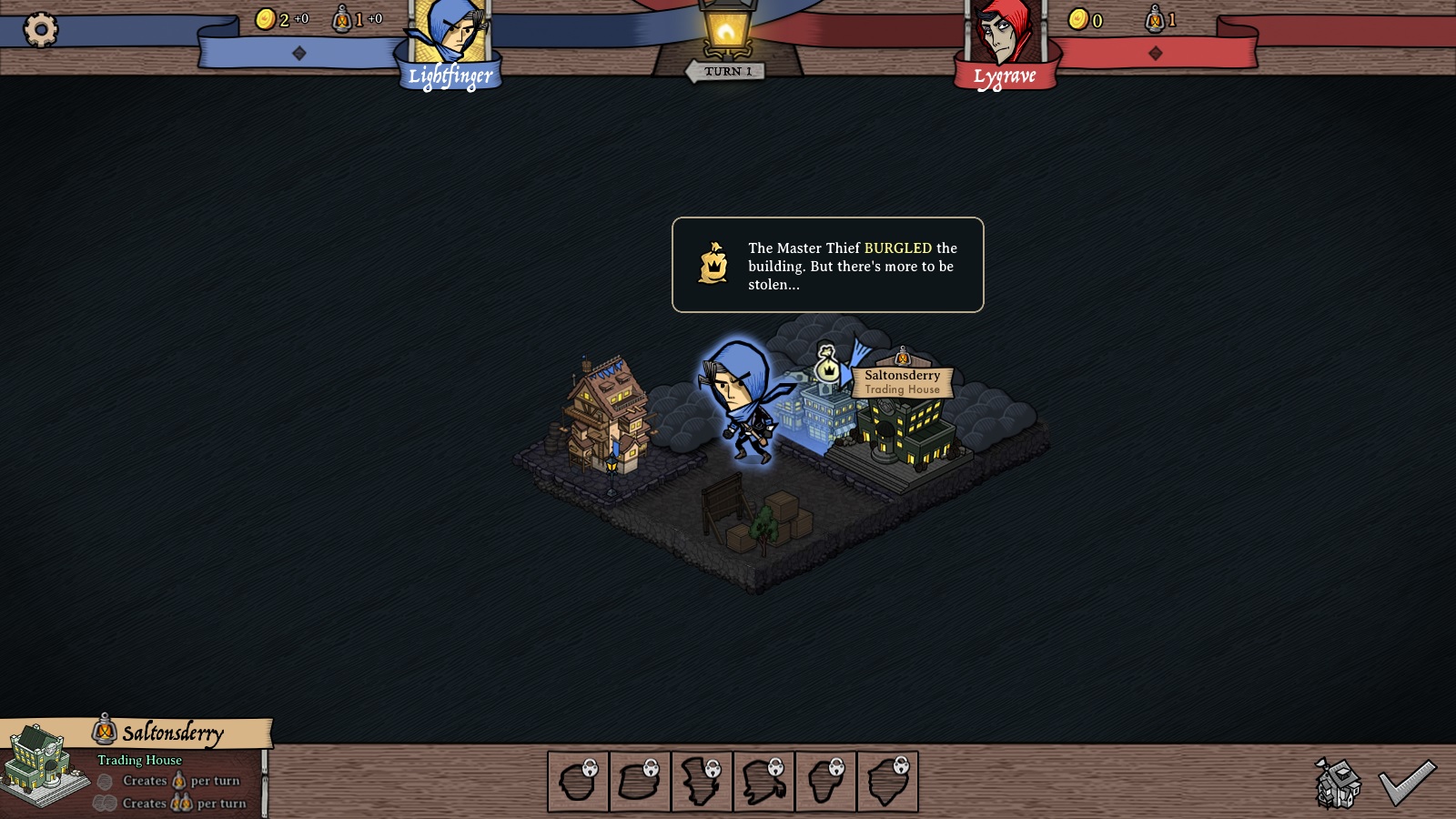 Your main unit is the Master Thief. During the campaign, that will either be Emma or Lightfinger, who are exactly the same besides their appearances. Master Thieves can scout through hidden streets and reveal units. They can burgle buildings for money and lanterns. They can also scout buildings so that they can later be controlled. Under the right circumstances, they can even kill foes.

Quick Tip! Knowing when to upgrade your Master Thief's offensive capabilities versus just investing in a Gang early can be a very important early decision.

Master Thieves dictate the pace of the game, and they are basically the linchpins of each strategic endeavor. At the end of every turn, they return to the safety of the Thieves Guild, so they can’t be killed. However, they aren’t the only important unit to keep track of.

All units are only available after their corresponding upgrades are purchased. Good news, though! After every upgrade is purchased you get a free unit to get you started. This is great for when you want to weigh your options regarding higher cost units, when you may only need one throughout the course of a map. 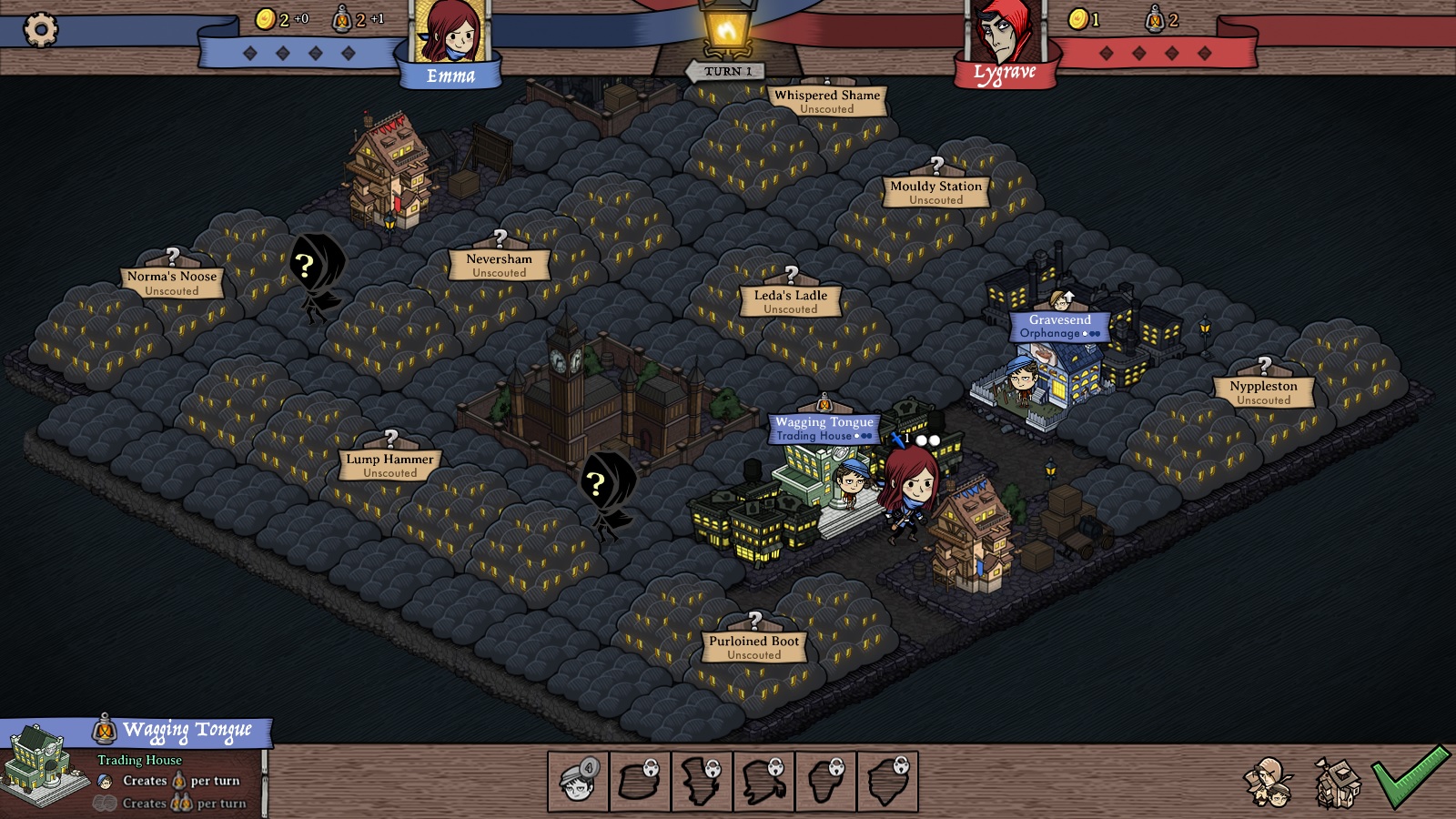 You will spend most of your time in Antihero running in and out of buildings. Dark buildings can be burgled for Gold coins. Most can be burgled twice, but the second visit will yield less coins. Buildings are often assorted and zoned by color-coded districts, which denote the sort of Businesses that are in them. Businesses must be infiltrated by Urchins in order to receive their benefits, and they require three Urchins to get their fully upgraded bonus.

The chances of you having a significant presence in all types of building on any given map is slim. Pick a couple of Businesses to exploit, and work their strengths into your strategy.

Quick Tip! Evicting just one Urchin from a Business is enough to cancel a fully upgraded bonus. If taking away a Victory Point or just hindering their production is a goal, a Truant Officer might not always be the answer. 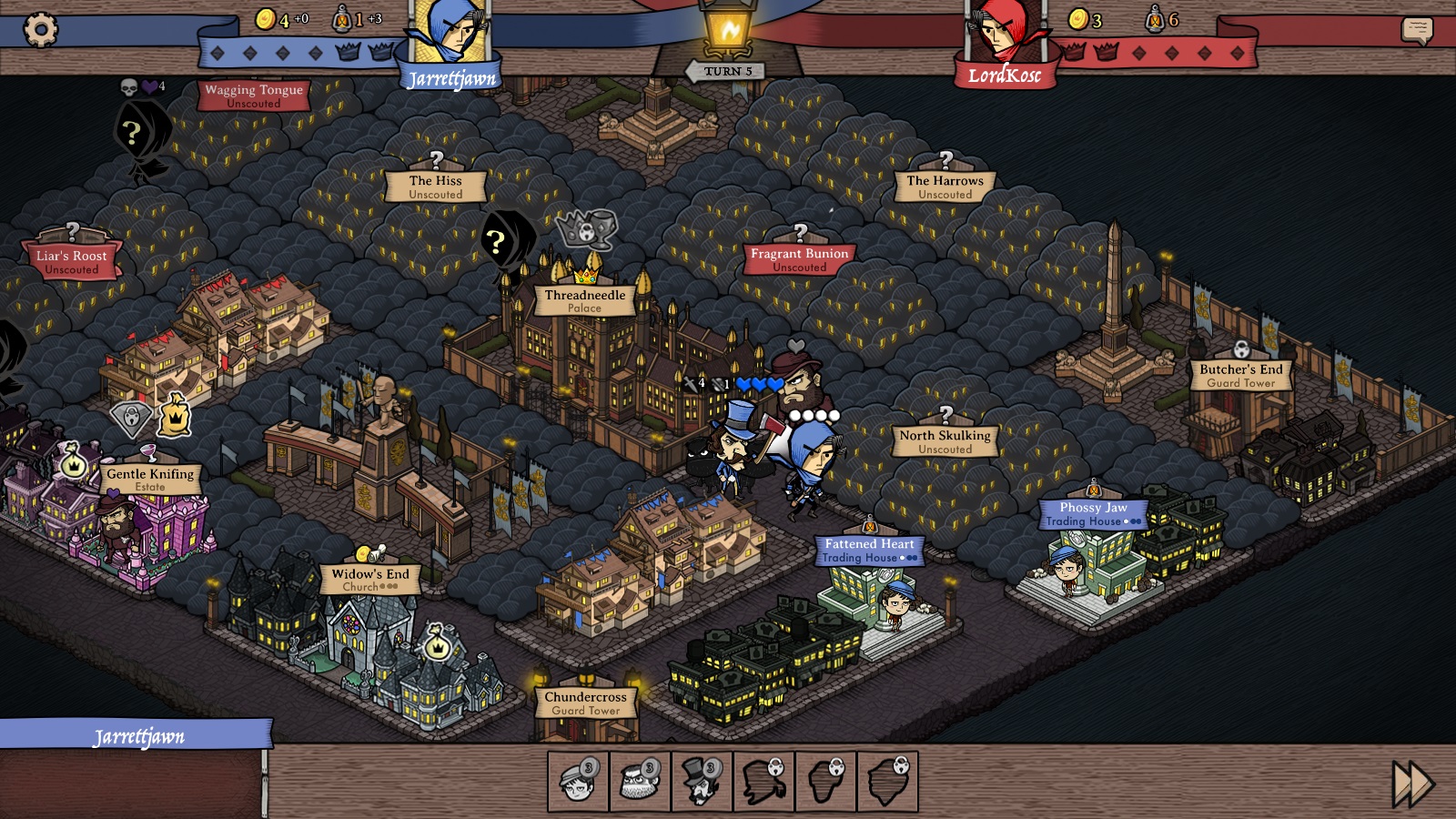 Should you need anymore information, come by the Official Antihero Wiki for everything you’d need to know. You can grab Antihero on Steam here.