Release a hero shooter in 2017, and it's bound to be compared to Overwatch. It’s simply an inevitability. Blizzard’s FPS is too much of a juggernaut for any hero-based game following in its footsteps to avoid the comparison.

Such is the case with LawBreakers, released earlier this month on Steam and PlayStation 4. The hero-based, multiplayer-only FPS from Boss Key Productions has been compared to Overwatch almost from the beginning.

From its cast of larger-than-life characters to their ultimate abilities and the game's loot boxes, there are definitely some apt comparisons to be made between the two shooters. There are also a number of major differences that set the two games apart, in terms of everything from game mechanics to the wider universe each title occupies. Here are some areas in which LawBreakers and Overwatch find common ground — as well as some of the elements that make each experience unique. 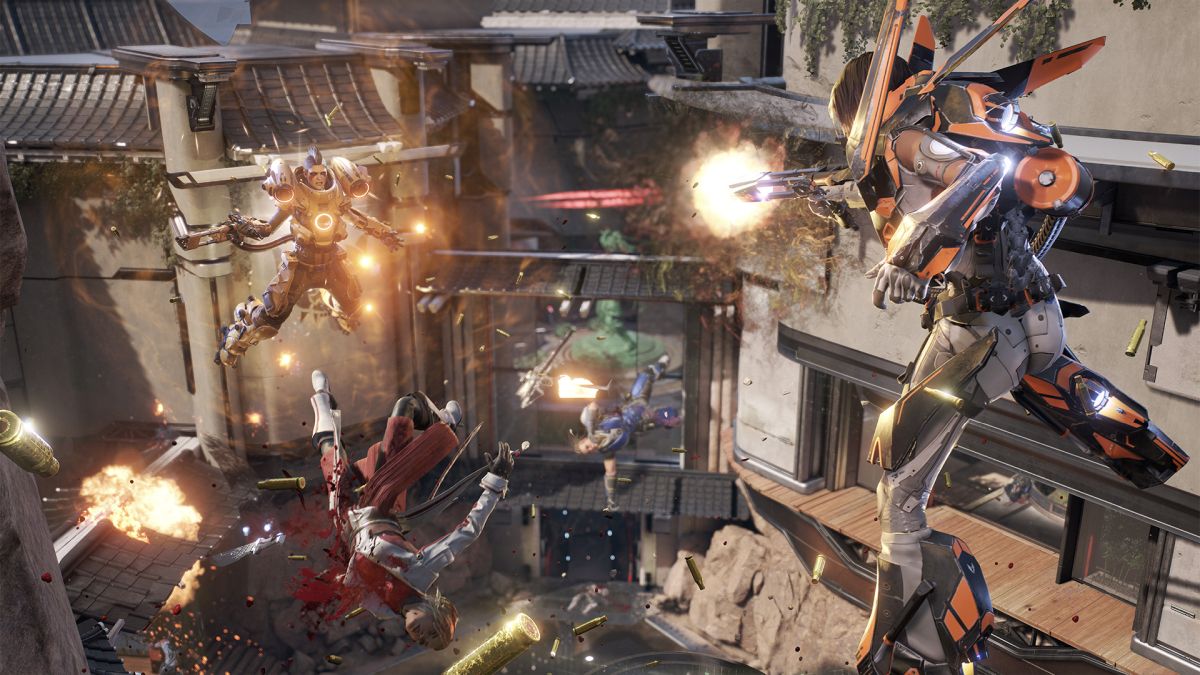 Similar: A Cast of Over-The-Top Characters

A hero-based shooter is hardly deserving of the name if it lacks heroes to play as, and it’s here where Lawbreakers and Overwatch find the most common ground (at least on the surface). Nearly every character in Blizzard’s Overwatch has become an immediately recognizable piece of videogame iconography, and while the hero roster in LawBreakers isn’t nearly as charming or memorable, there are a few standouts.

Maverick, for instance, sets herself apart with a look and attitude straight out of the film Top Gun, while the reprogrammed security bot Nash shines by only being able to communicate via violence-oriented quotes from popular culture. 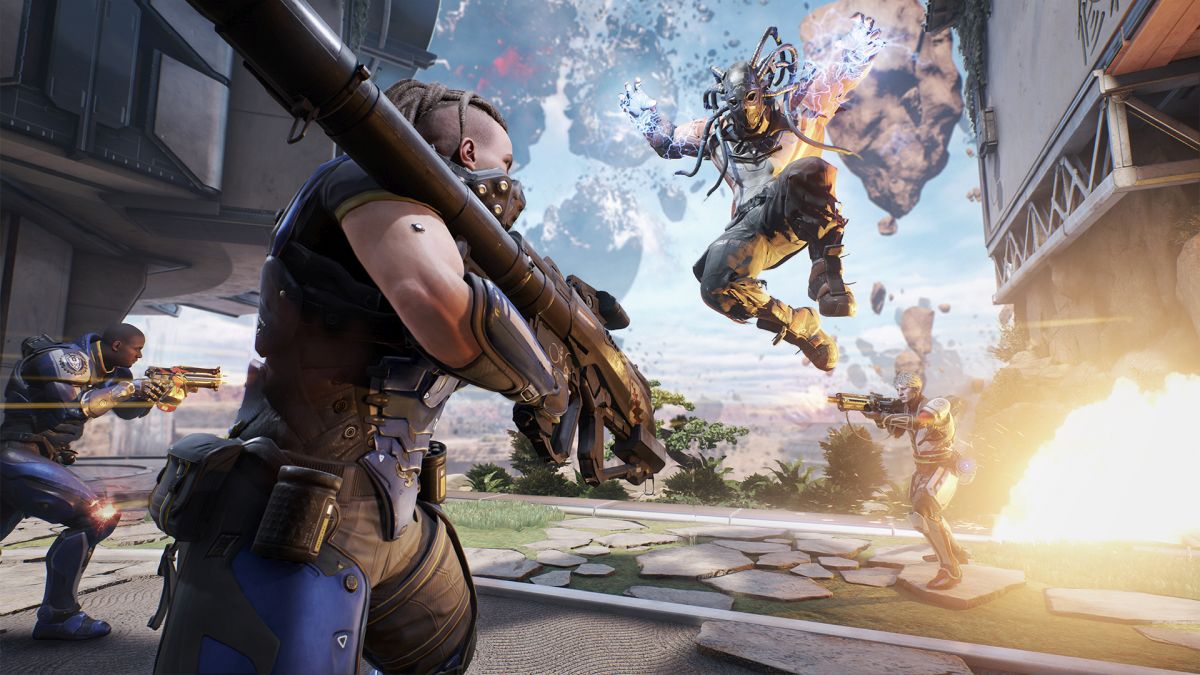 In a major departure from Overwatch, LawBreakers actually features two heroes for each of the game’s roles, depending on which team the player finds themselves on. Fans of the Vanguard class will play as Maverick while on the side of the Law, but play as Toska-9 when on the Breakers team. It’s a nice touch that keeps LawBreakers grounded in its own universe, as opposed to playing a match in Overwatch, where archenemies Soldier: 76 and Reaper can be seen fighting side by side. 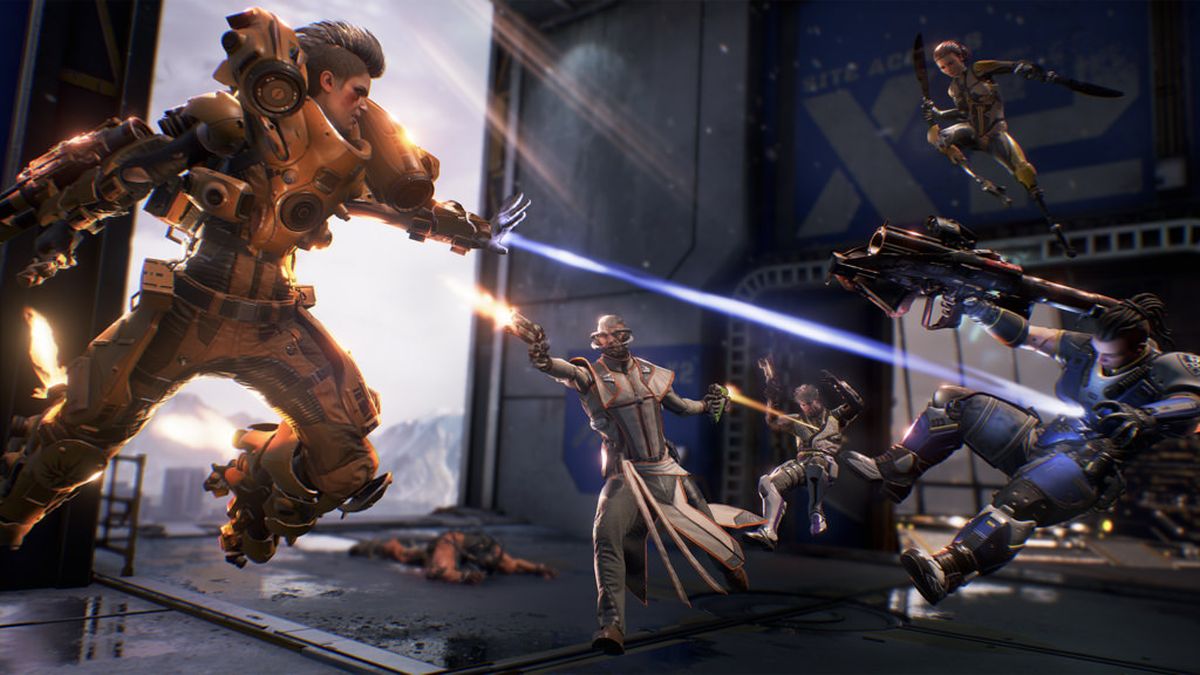 Hero abilities can make or break a hero shooter. A game’s cast of characters might be packed with interesting designs and personalities, but if they aren’t fun to play, it’s all for naught. On that front LawBreakers brings home the bacon. Each hero class plays wildly different from one another, and there’s a steep learning curve for mastering each one.

As is the case with Overwatch, each character in LawBreakers sports a number of different abilities as well as an ultimate ability that charges up over the course of a match. Mastering those abilities is key to emerging victorious. LawBreakers puts special emphasis on arena traversal by giving each hero-class a unique movement ability, such as a slide, a sprint, a hop, or a jetpack. It’s important to note that ultimate abilities are also far less game-changing in LawBreakers than in Overwatch. If you whiff your ultimate in LawBreakers, it’s generally not too big of a deal. Miss your Graviton Surge in Overwatch? GG. 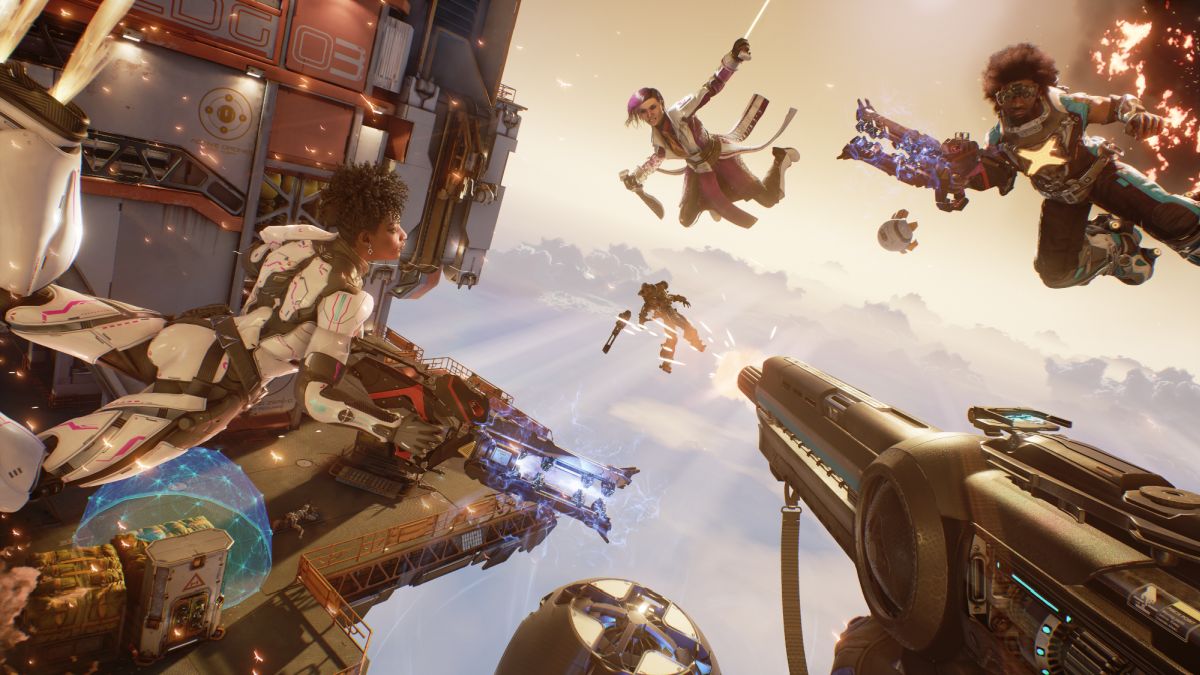 Playing Overwatch is a bit like playing a far more advanced game of rock, paper, scissors. Some heroes counter other heroes, and a good team will have a variety of characters that synergize well together. Tanks, in particular, are an important part of forming a cohesive team in Blizzard's FPS, thanks to their ability to soak up or mitigate damage.

LawBreakers, on the other hand, is a bit different. Time-to-kill in LawBreakers (i.e. how quickly it’s possible to kill another player) is far shorter, in-keeping with the overall speed of the gameplay. While certain heroes in LawBreakers do have more health than others, there aren’t “tanks” in the Overwatch sense. Players, regardless of hero, can kill and be killed incredibly fast, which gives LawBreakers a much faster pace than other hero shooters on the market. Whereas Overwatch feels similar to something like Valve's Team Fortress 2 during combat, LawBreakers is more akin to classic arena shooters like Quake or Unreal Tournament. 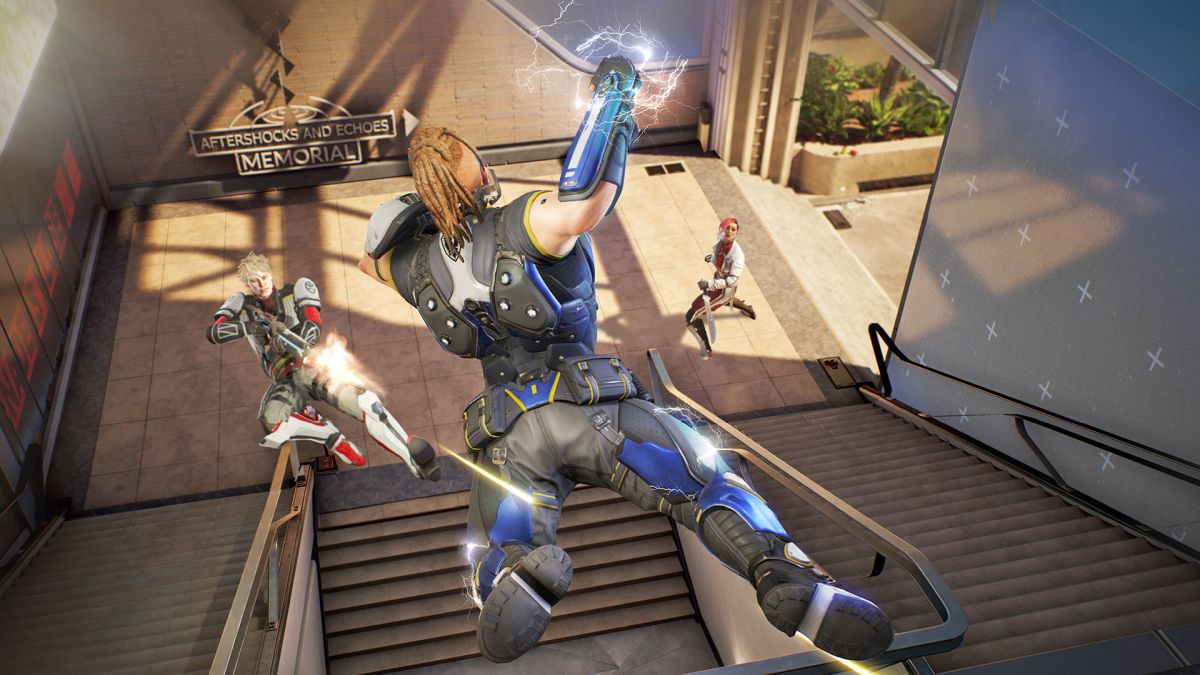 Similar: A Focus on Objectives

While there are still plenty of shooters on the market that still put all the emphasis on tried-and-tested deathmatch gametypes, hero shooters like Overwatch and LawBreakers break the mold by instead putting their focus on objective-based scenarios which require teams to cooperate in order to succeed.

LawBreakers sports four modes; Blitzball, Uplink, Turf War, and Overcharge. Blitzball sees players attempting to run a ball into the enemy base. Uplink tasks players with first controlling an uplink station and then defending an uplink at their base for a set period of time. Turf War is the LawBreakers spin on capture point, while Overcharge sees opposing players stealing a single battery back and forth in an effort to be the first to charge it to maximum capacity. The two titles may sport different gametypes, but each game’s objective-based focus is key to their overall design. 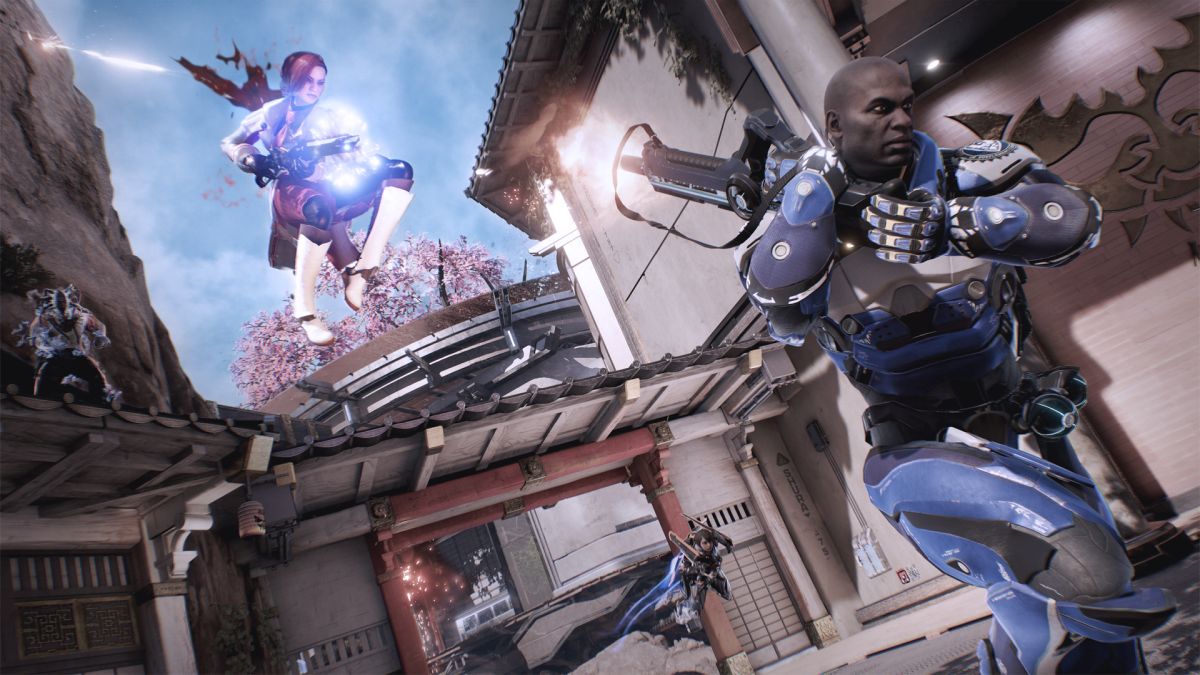 One of Lawbreaker’s marketing taglines is “gravity defying combat” — and with good reason. Each map in LawBreakers sports zero-gravity pockets in which players can float through the air. It’s in these zones that the movement abilities of each hero class take on newfound importance, as players can dash and sling themselves around with blinding speed in order to set up attack angles that are completely impossible in areas that still abide by the laws of physics. That’s something you won’t see in Overwatch. 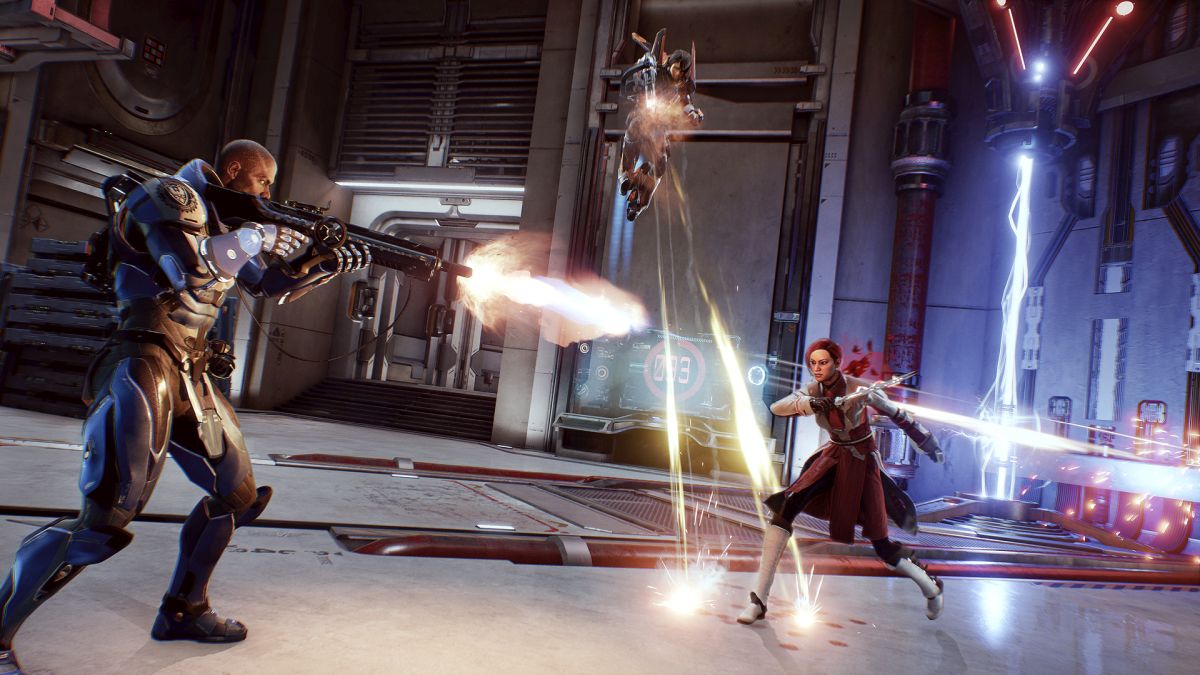 Overwatch is one of the games to have popularized the idea of loot boxes, so perhaps it’s no surprise that LawBreakers sports a nearly identical cosmetic unlock system. Just like in Blizzard's shooter, LawBreakers can players earn crates by leveling up their profile. Opening those crates give them a chance to unlock new skins for each hero, as well as other items like weapon skins and player profile icons. One unique type of unlock in LawBreakers is a “bootprint” of your choosing that is displayed on an enemy player’s screen after kicking them to death with a melee attack. Think of it as a boot-shaped calling card. 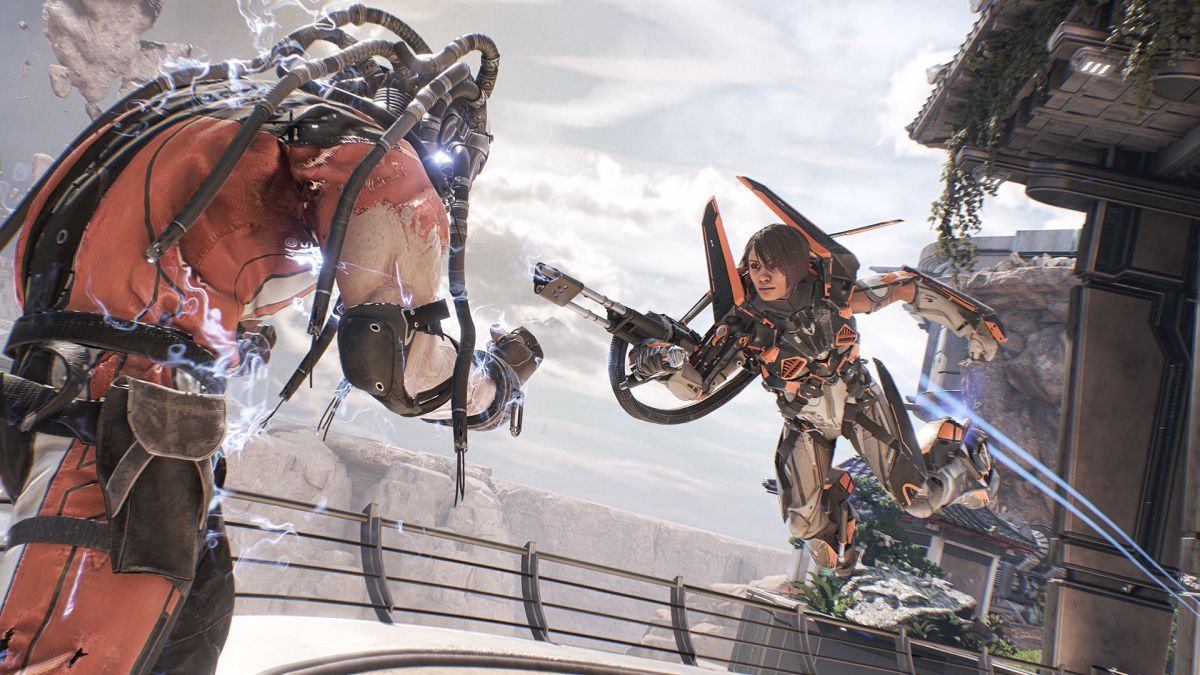 There is perhaps no greater way to differentiate LawBreakers and Overwatch than by their respective tones. Overwatch shows players a vision of the future filled with hope, where humanity has accomplished incredible feats of science and engineering. Sure, there's conflict every now and then, but overall the world the characters of Blizzard's game inhabit is peaceful and optimistic.

The world of LawBreakers couldn’t be more different. It’s a place where a global cataclysm has shattered the laws of physics, and now criminals and the government are locked in battle with one another for control. LawBreakers is also bloody and, in everything from character voice lines to weapon stickers, sports a tongue-in-cheek teenage angst that is just about as far removed from Overwatch as possible.

LawBreakers and Overwatch may share important hero shooter bullet points like unique characters, objective-based maps, and ultimate abilities — but really, the two games stand firmly on their own merits. Both sport their own unique look and feel that makes each title worth playing for FPS fans.

LawBreakers is available now.  Looking for nitty-gritty details about the game's various heroes? Be sure to head over to the LawBreakers Wiki for more information.