Battlefield 1: In the Name of the Tsar adds 11 new weapons for players to get their hands on, and the sheer variety of death-dealing weaponry is something to behold. From tried and true classics like the Mosin-Nagant rifle to the experimental SMG 08/18, there’s a little something for each and every kind of Battlefield player to latch onto. This guide collects all the information you'll need to unlock each and every new weapon.

Each class receives two new weapons, each sporting two variants for players to experiment with. That being said, you won’t be able to use these new guns right out of the gate. You’ll have to put in a little legwork to unlock each of them by completing service assignments. Usually these assignments revolve around killing enemy players with a certain weapon or performing certain tasks suited for whatever given class you are playing. 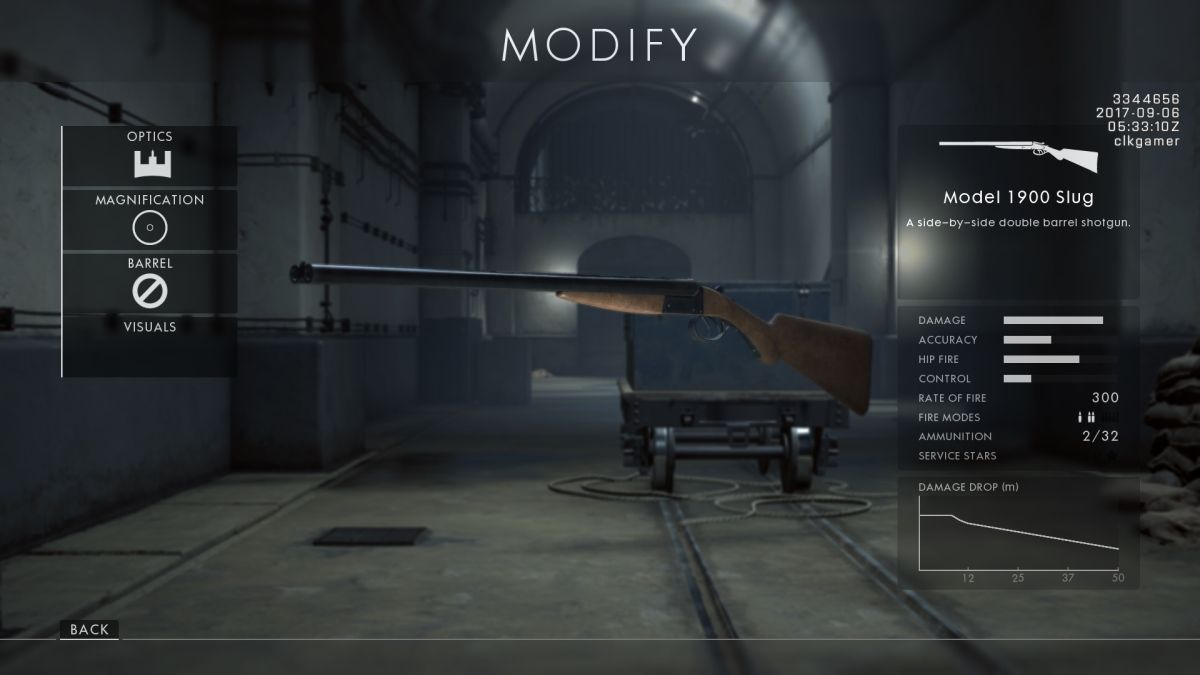 It doesn’t get much better than a good ol’ double barrelled shotgun, and that’s exactly what the Model 1900 is. This weapon packs a serious punch, and even sports an alternate fire that allows players to fire off both barrels at once. The factory variant recovers faster, while the slug variant gives players additional range. 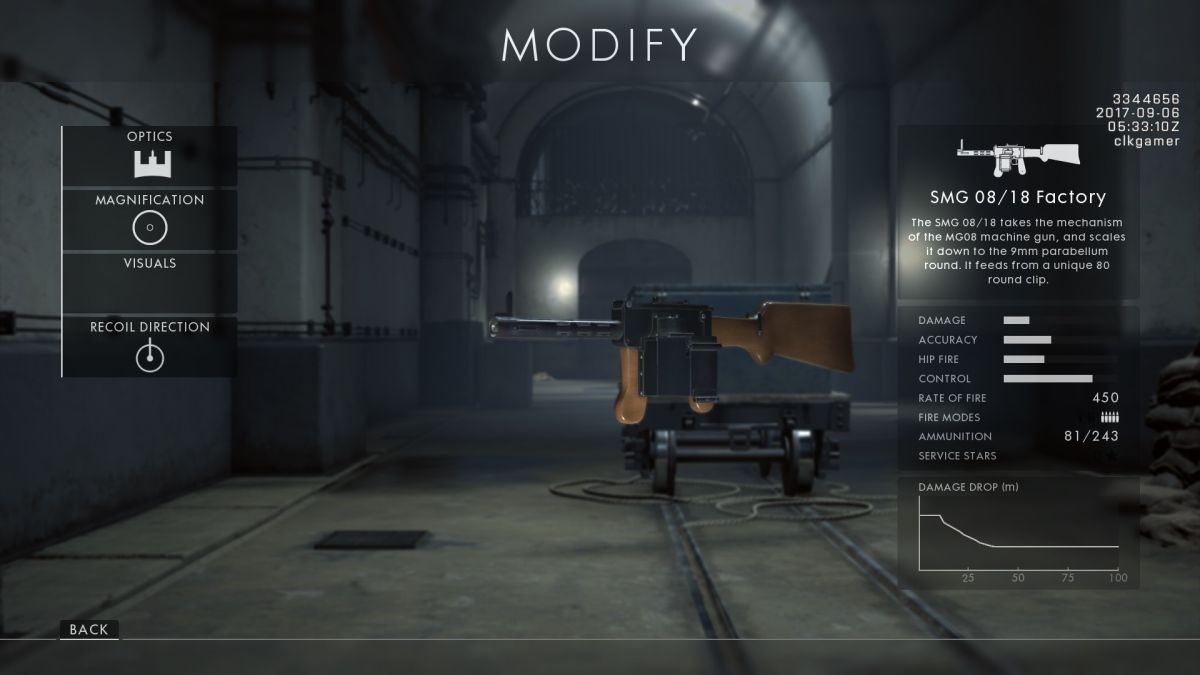 This experimental weapon feels more like a LMG than an assault class weapon, but regardless it can be powerful when in the right hands. It doesn’t deal a ton of damage per hit and fires relatively slow, but it sports good range, accuracy, and sports a massive clip size. If you prefer to keep your distance, the optical variant gives players a sightly better suited weapon for taking out targets at range. For in-the-trenches fighting, stick with the factory variant.

How to Unlock Optical Variant: Perform 50 kills with the Autimatico M1918 Trench, destroy 5 tanks with Anti-Tank mine 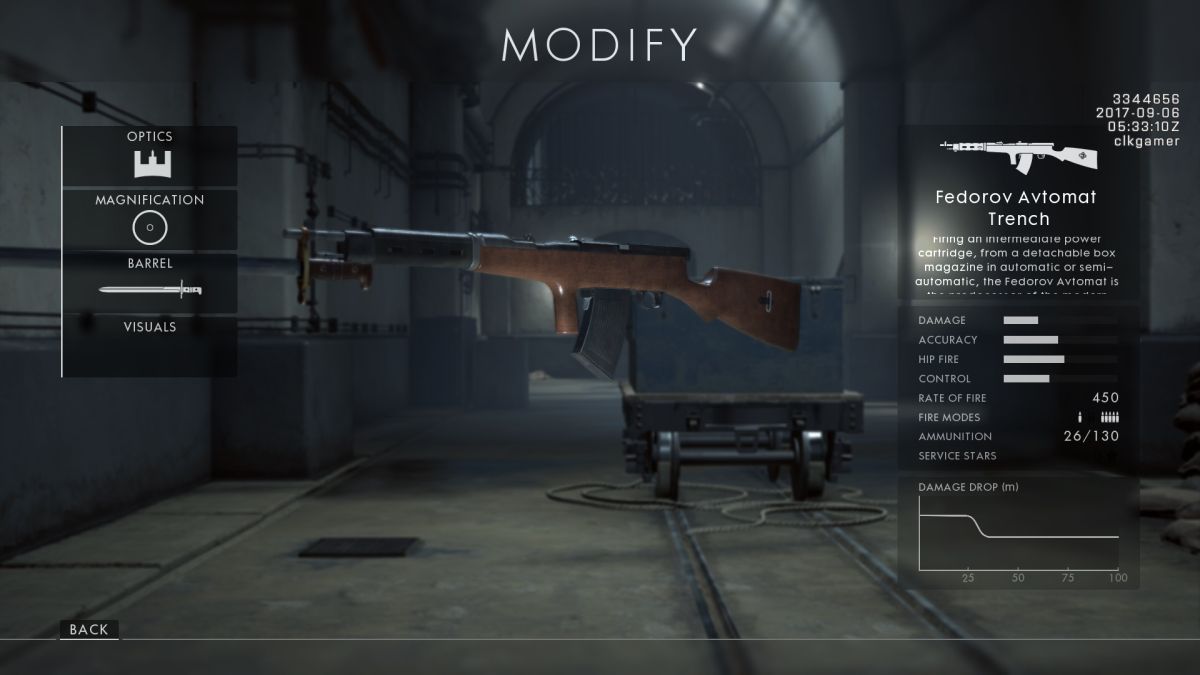 A precursor to modern assault rifles, the Fedorov Avtomat is the perfect weapon for the medic player who likes to get up close and personal. This automatic weapon sports a quick rate of fire and though it also can be difficult to control over long ranges, it's well suited for both close and medium ranged combat. Equip the trench variant if you find yourself hip-firing the weapon in close encounters, or use the optical variant for mid-range fighting. 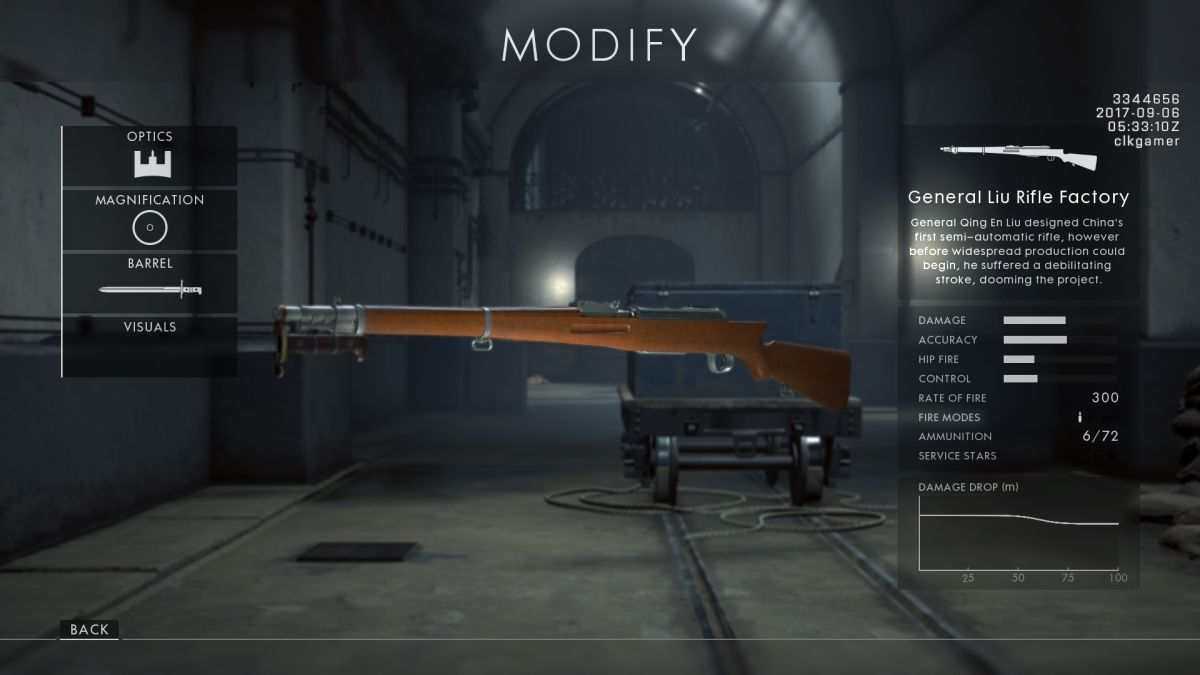 It seems tough to follow up the power and rate of fire of the Fedorov Avtomat, but the General Liu does pack a powerful punch. It only sports a six bullet magazine size, so players who want to use the weapon effectively will have to make sure each bullet finds its mark. 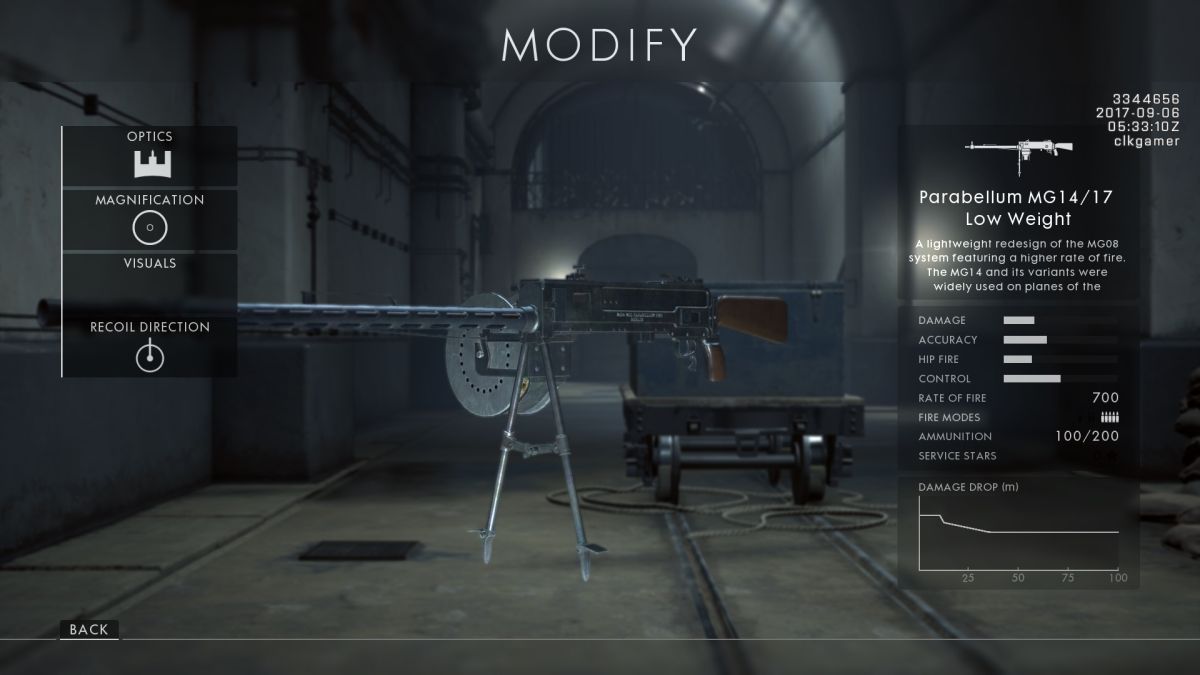 To give you an idea of how powerful the Parabellum MG14/17 is, it was originally designed to fit on German planes in WWI. The rate of fire on the weapon is among the highest in the entire game at 700 rounds a minute. With that many bullets flying out of the barrel, it should come as no surprise that the recoil can be a bit to manage. If, however, you can get it under control, the MG14 can be truly deadly. For those who prefer to sit back from a stationary position with their LMGs, the suppressive variant, sporting a telescopic sight, will be the variant for you. Both variants sport a bipod great for laying down suppressive fire as well.

How to Unlock Suppressive Variant: Destroy 2 airplanes with LMGs, perform 20 kills with the Mortar Airburst 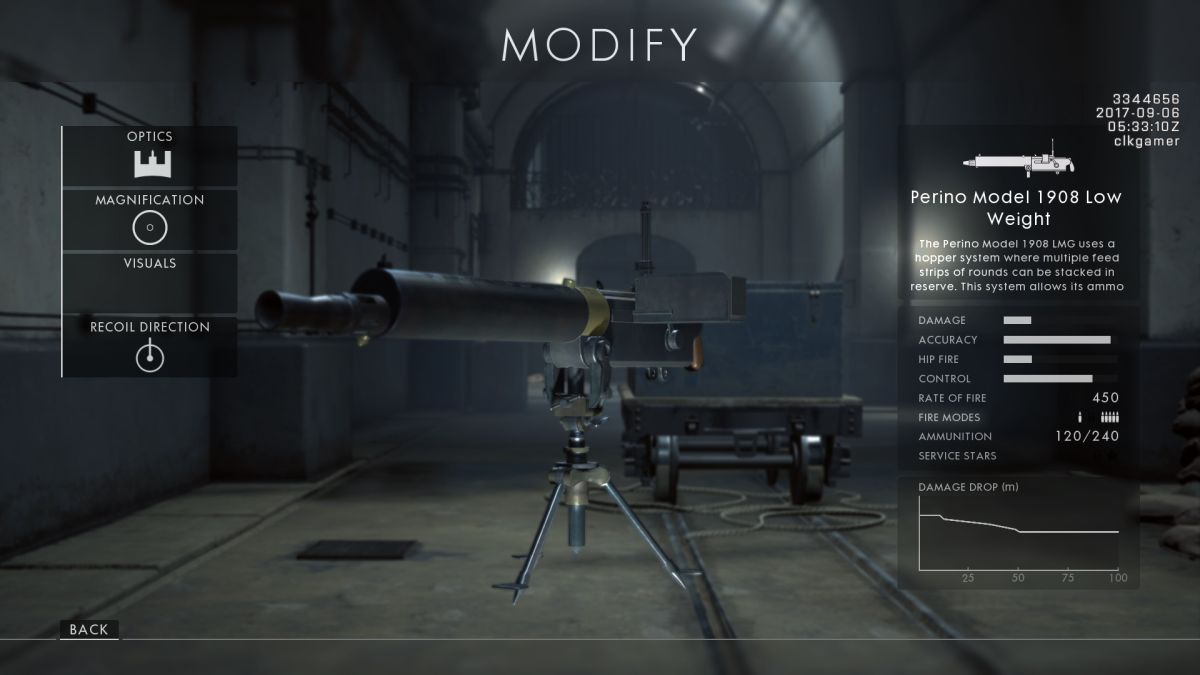 This light machine gun looks like it will end up being a fan favorite. It sports a massive magazine size, good accuracy and steady damage. The low weight version recovers faster, making it better for on the go fights, while the defensive variant features and optical scope to take down targets at a distance.

How to Unlock Low Weight Variant: Perform 40 kills with the MG15 n.A Low Weight, perform 10 squad resupplies in a round 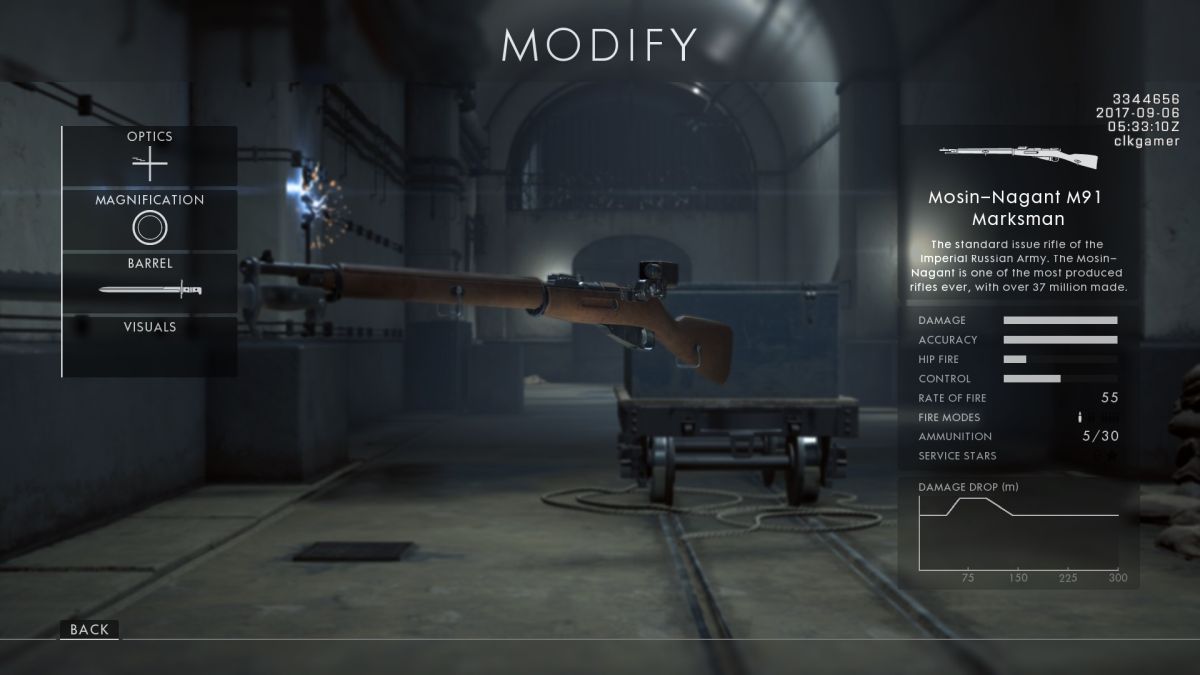 Few weapons are as well known as the Mosin-Nagant rifle. It’s an iconic Russian weapon, and it doesn’t disappoint in Battlefield 1. The marksman variant of the rifle adds a telescopic sight for long-range sniper kills, while the Infantry variant is more well-suited for scout players who like to be a little closer to the action.

How to Unlock Infantry Variant: Perform 3 headshots with the SMLE MKIII Infantry in a round, perform 20 kills with the Mars Automatic pistol 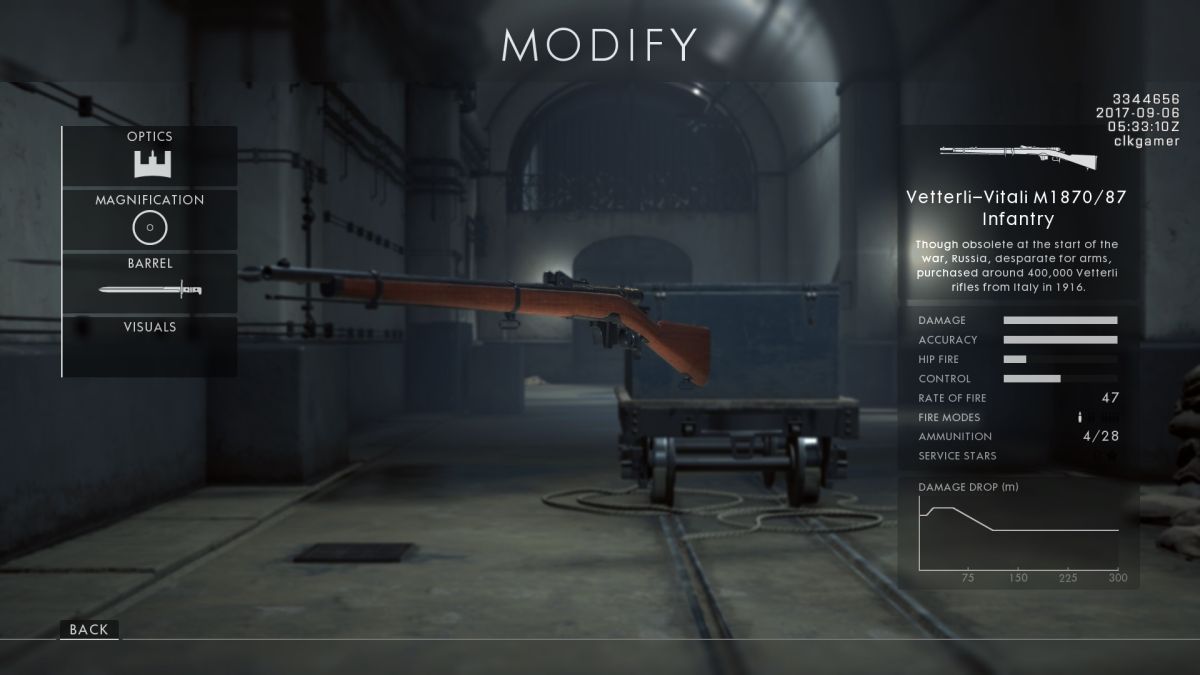 This Italian rifle doesn’t immediately stand out from other rifles in the game, but it still packs a powerful punch. The infantry variant can be aimed faster, though most players will likely want to opt with the carbine variant thanks to its optical sight. 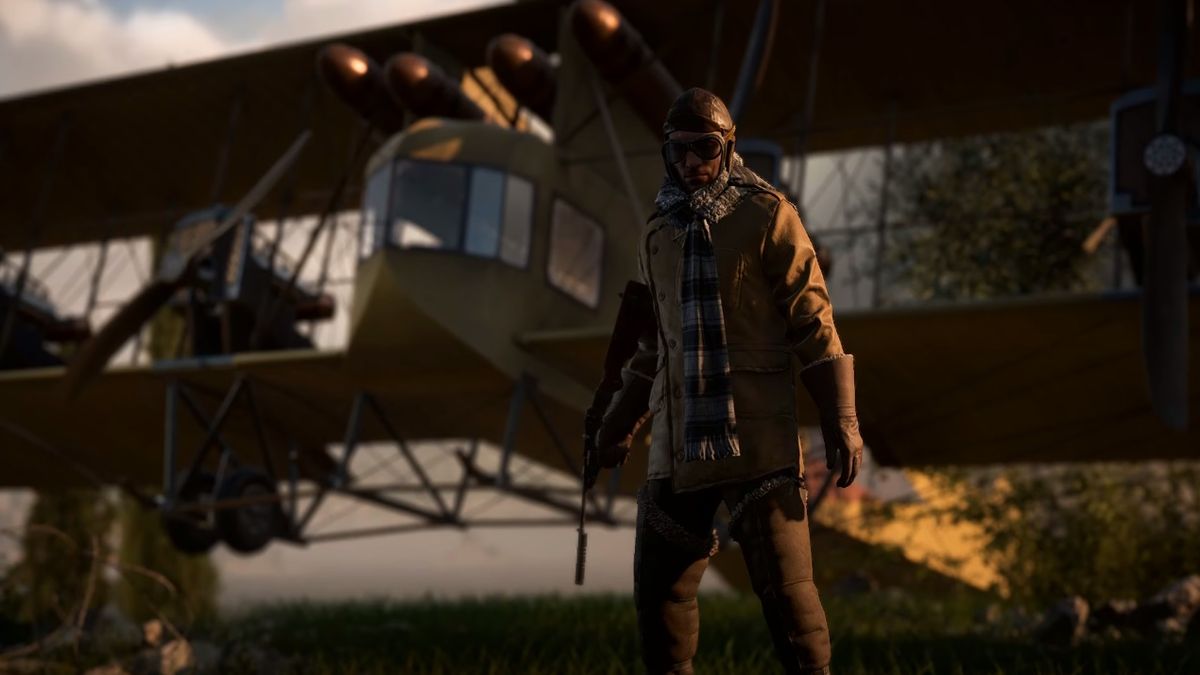 This silenced carbine doesn’t deal a ton of damage and doesn’t sport much range, but it does fire rather quickly and can be powerful up close.

How to Unlock: Perform 40 kills with the FT Light Tank 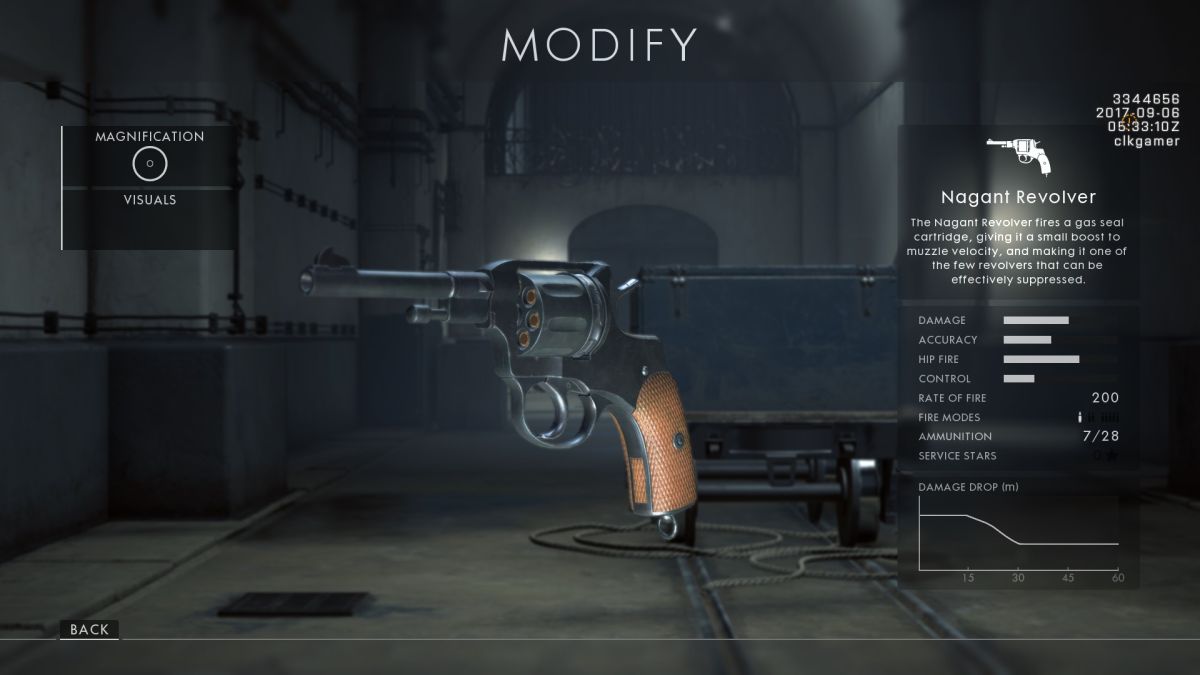 This seven-round revolver fires off shots fairly quickly and does decent damage, but it does sport a hefty reload animation. To combat this, be sure to fire every round in the cylinder. That way, instead of reloading the weapon one bullet at a time, the entire cylinder is replaced at once.

How to Unlock: Perform 20 kills with the Luger P08 pistol 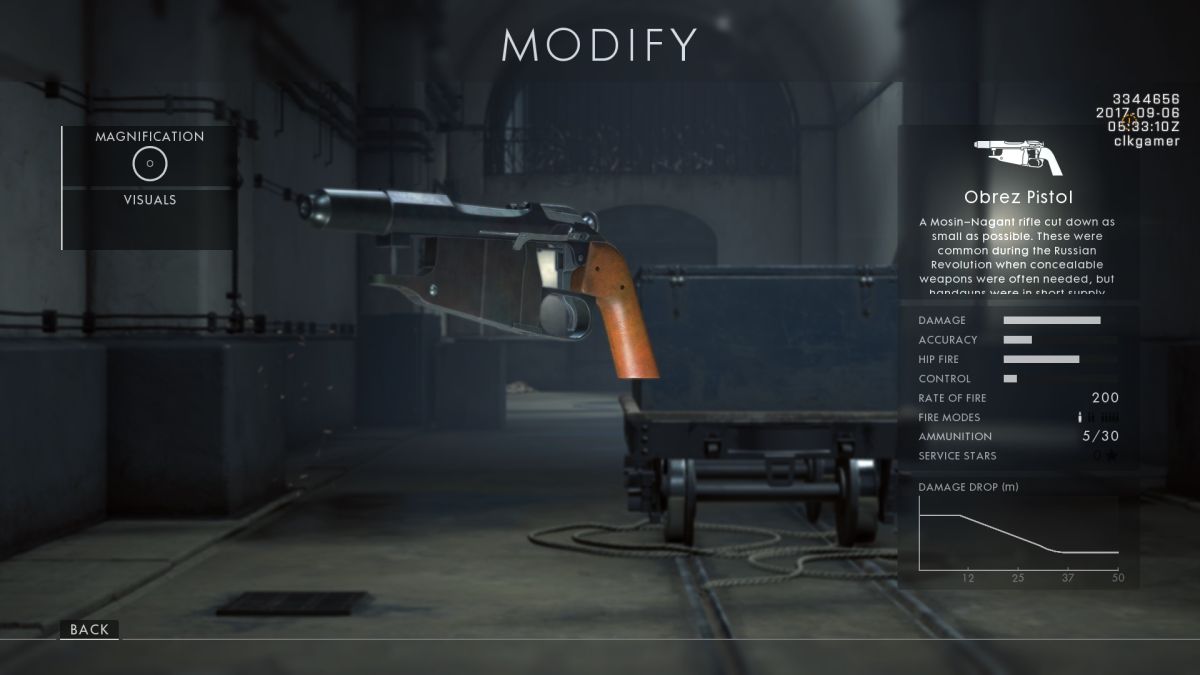 The Obrez is essentially the magnum of Battlefield 1; a bolt-action powerhouse of a sidearm that deals a massive amount of damage per shot. Of course, the downside is a slow rate of fire and poor range. But up close, the Obrez is a force to be reckoned with.

How to Unlock: Perform 5 kills with the Mle 1903 pistol in a round

For more information on the weapons, maps and vehicles of Battlefield 1, be sure to check out the Battlefield 1 Wiki. Battlefield 1: In the Name of the Tsar is available now for Battlefield 1 premium members and arrives September 19 for season pass holders.