With PlayerUnknown’s Battlegrounds being such a smash hit, it’s no small wonder that other developers are looking to catch some of that lightning in their own little bottles. Enter Epic Games, who have found room in their survival game, Fortnite, to add a new type of frantic gameplay. Replacing the zombies with several dozen other players, you're tasked with surviving to the very end against, well, each other. The tried-and-true gameplay of PUBG mixes well with the building mechanics of Fortnite to create a fresh take on the instant classic.

But your first step into this pool is sure to be something of a giant leap, so it's understandable if you need some guidance. Let us guide you to victory, and your very own metal umbrella! 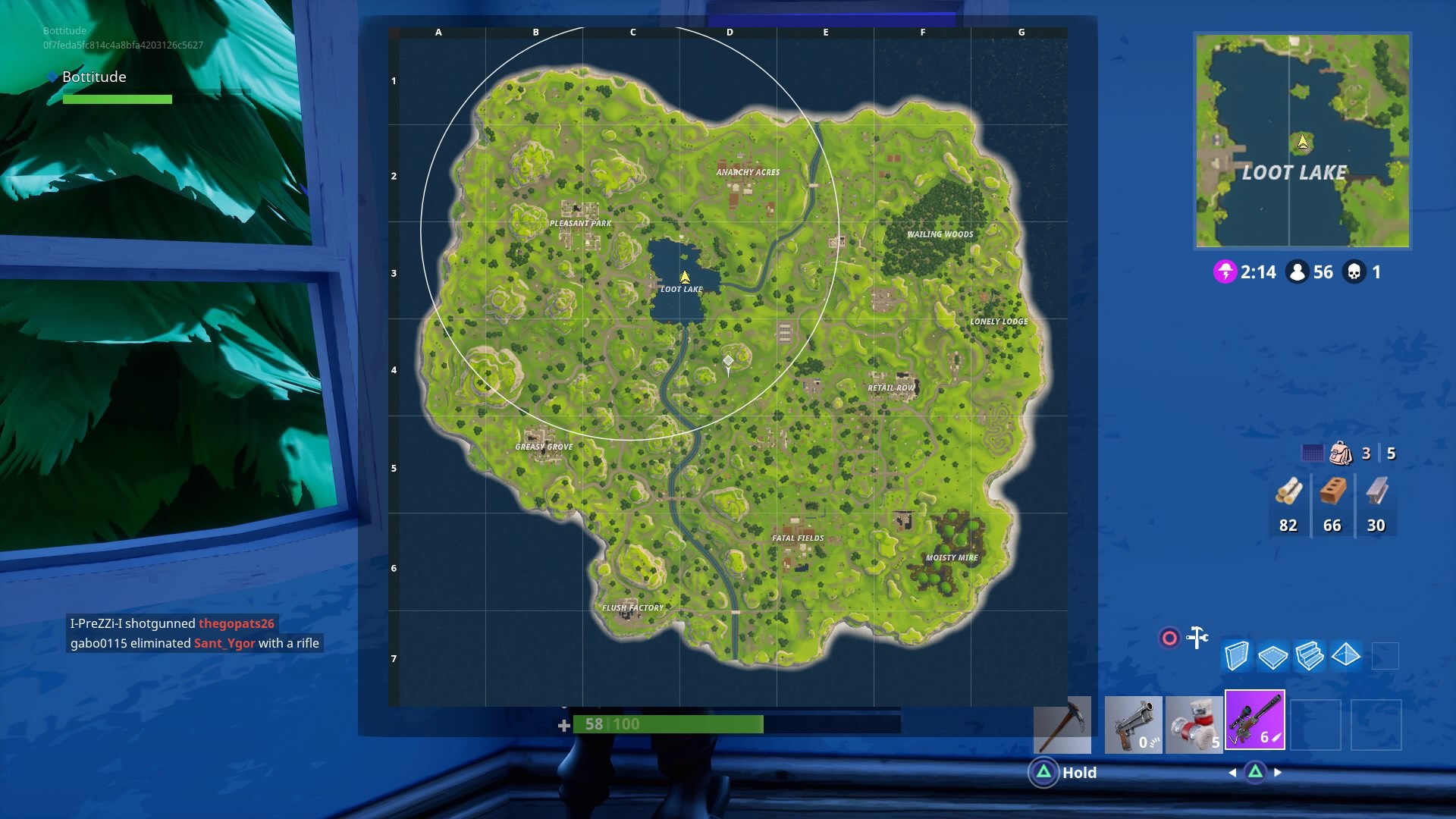 When the big blue party/Battle Bus takes flight, you’ll have a limited time to leap out of it and onto the island of gunplay and glory below. It lurches over in a straight trajectory that changes every round, so take stock of the monuments you're passing over.

Jettisoning yourself into the void aimless is a quick trip to an early elimination — you need to dive with direction. The scattered metro areas full of fast food joints and gas stations are almost certain to have resources worth collecting, but they're equally assuredly going to be swarmed with folks who have the very same idea.

Many of the tallest hills have isolated houses on top of them. Again, these are targets you may have to fight for, but with the possibility of finding resources being lower, you’ll be fighting far fewer people for whatever spoils you find. The isolated shelters in the lake, swamp, and forest could also make for prime landing points, but being in such remote areas can make opting for a speedy escape a complicated and dangerous game. Consider your strengths, and plan accordingly. 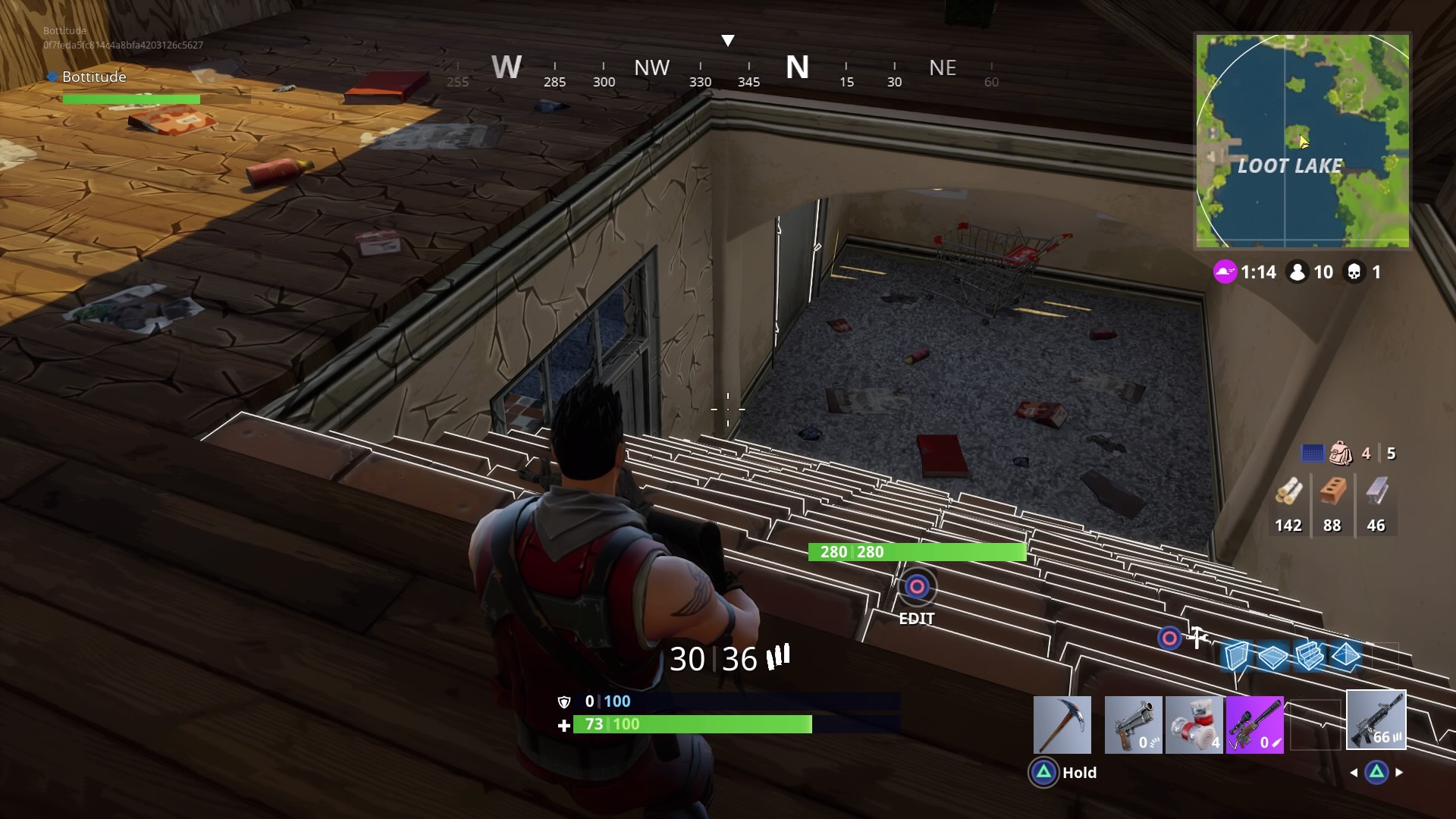 2. Check Every Corner of Each Building

When you finally pick a landing place and your feet touch the ground, move quickly into the first set of solid walls you can find. This can be a home, a shack, a store — whatever has walls to shield you from bullets.

Clearly, the one-room shacks and cabins won’t have much to offer in terms of exploration and treasure. The likes of your four-room family homes on a hill and abandoned prisons have more mysteries to hide, and it’s very important to uncover these things ASAP.

This means turning every corner and checking every room for goodies. And keep your ears perked for a twinkling sound, because it means there’s a chest nearby. If you’ve looked everywhere on every floor, try the ceiling. Many open attics sit just waiting for the right set of stairs to reach them.

And don’t forget to break down any furniture for building materials! 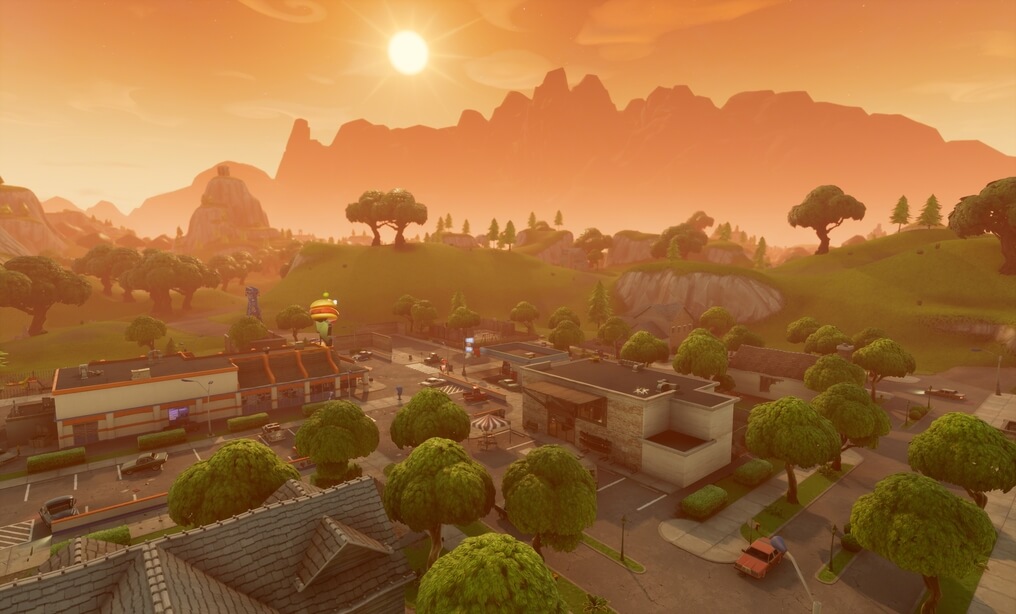 3. Move Only When You Have To

Once you’ve picked your chosen shelter dry, the primal urge to run into the wilds and find more treasure to collect will come over you. Resist this urge.

With so many people clawing at each other for the means to be the last person standing, a secure shelter makes you king among men. Solid walls, clear firing vectors, and some clever traps are the only thing you can trust. It’s the most secure sanctuary you’ll get.

Yes, the storm encroaches and forces everyone to move to a central location over time, but you don't have to until it's absolutely necessary. If the storm isn’t going to push you out of your base of operations, then don’t move. Let the rest of the rabble sort themselves out. If it does, you know where it’s going and how much time you have to get there, so use caution. 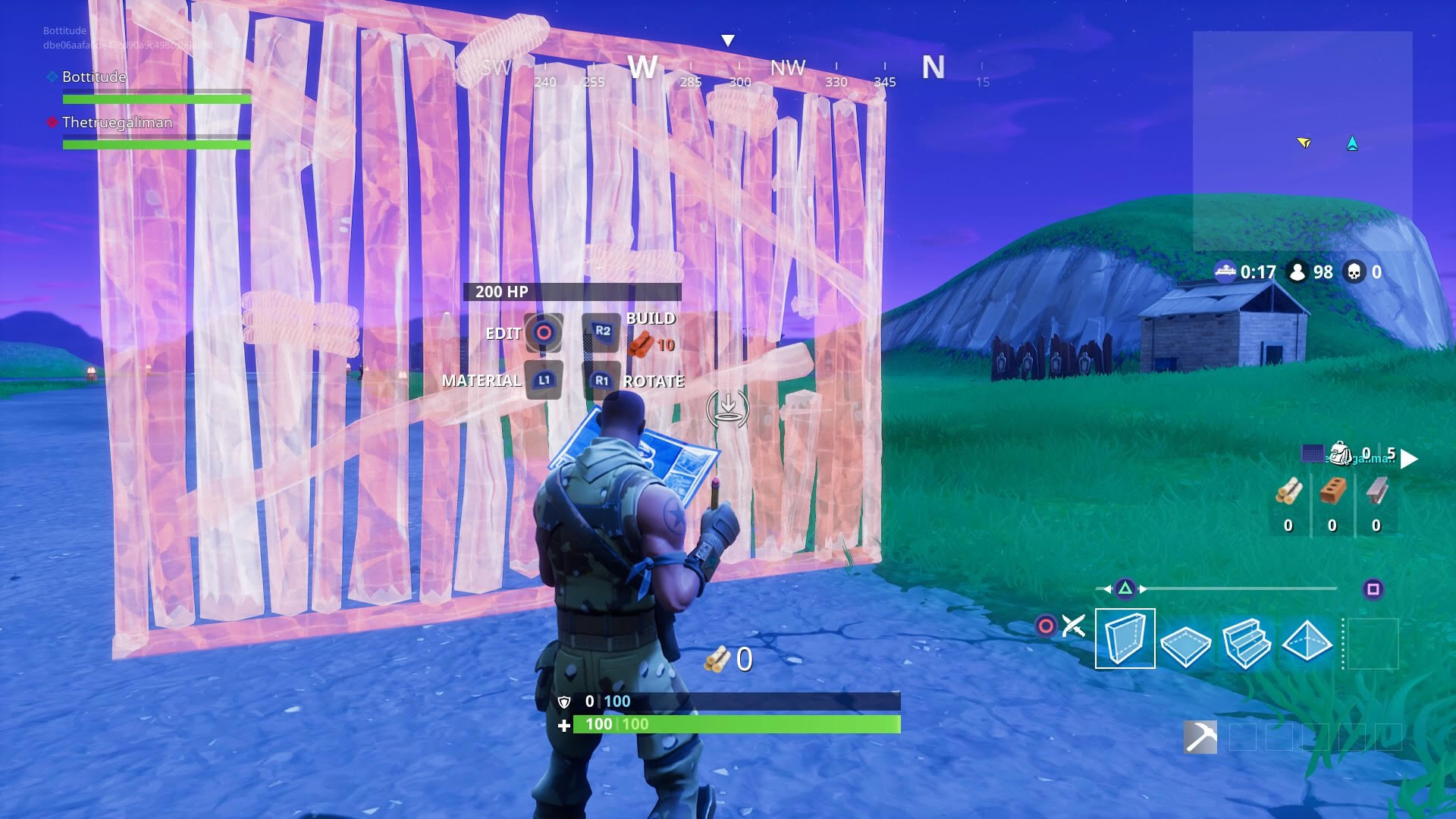 4. If There’s No Shelter, Build Your Own

Base building is a key mechanic in Fortnite, allowing you to take wood, stone, or metal and build things with them. The standard game utilizes this mechanic to great effect in its PvE component, where you build forts to protect you and yours from the belligerent undead.

In Battle Royale, when you aren’t pushing back zombies, you're fighting against the ferocity of human survivalism. Building a base and hunkering down isn’t as great an idea in this mode, since you’ll be moving often — but don’t forget that it’s an option, as it can save your life.

If you get forced into a region without much cover, build yourself some walls. In the days since the game has been released, I've watched folks turn the lemons of geographical suicide into the lemonade of a cliffside firebase. If you've found a shelter but it could use some repair, don’t forget that you are perfectly capable of doing just that! And even if you don’t need to fix walls, sometimes modifying the buildings to provide better shooting roosts can go a long way.

Even when you aren’t camping out in a place, locomotion can be a cinch with some quick thinking. Don’t want to go the long way up a hill? Build a stairway straight to your personal haven, right over those sheer cliffs. The same strategy can lead you directly into the second floor of houses, or onto rooftops.

Also, don’t forget that things that are built can be destroyed. If you know someone is hiding in the room a floor above you, but they have the stairs covered with traps and gunfire, dig the floor out beneath them! On more than one occasion, I’ve chopped into barricaded rooms to get to someone, like Jack Nicholson in The Shining. I’ve also smashed my way out of rooms when I heard footsteps on approach. 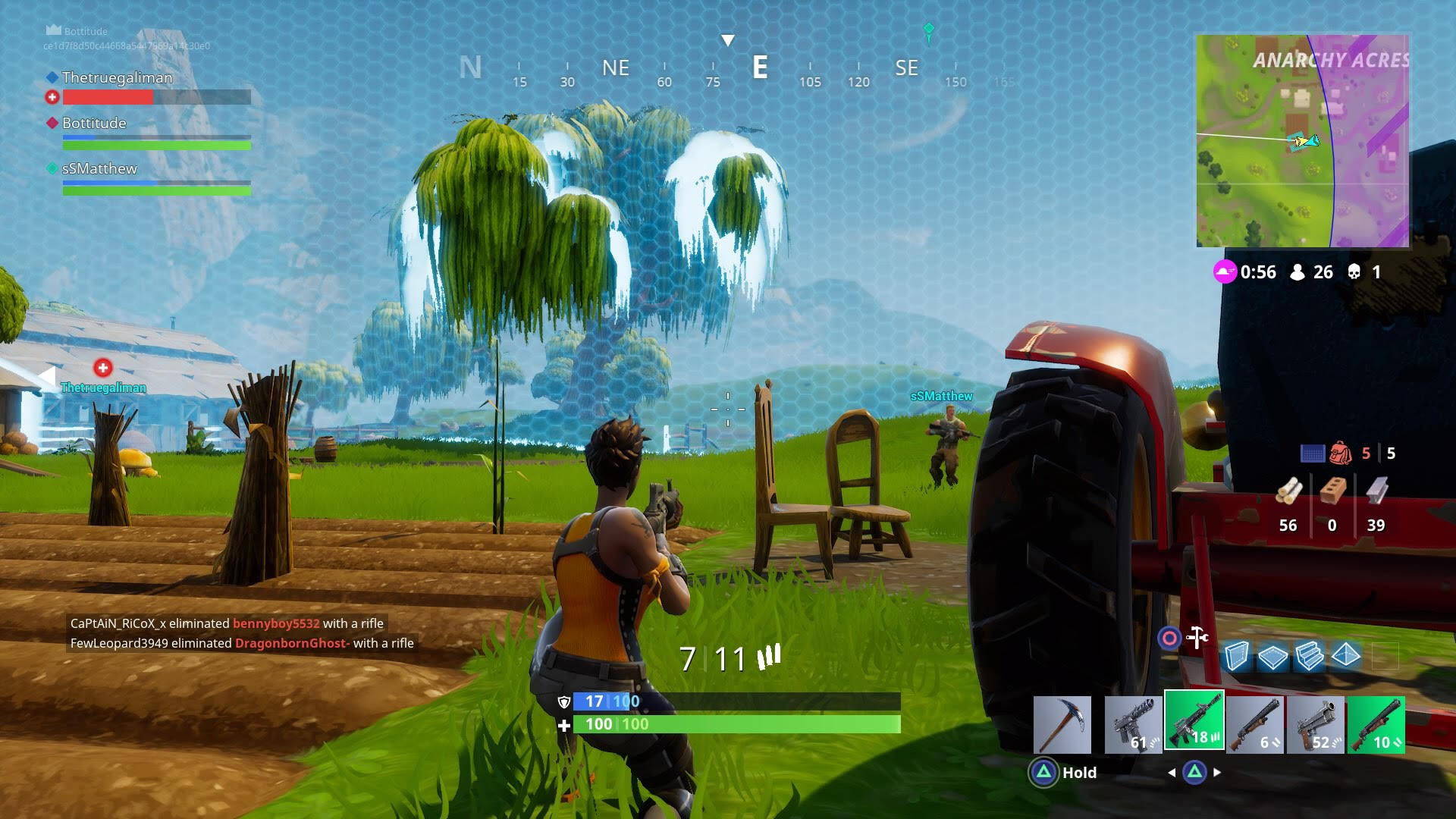 5. Don’t Be Afraid to Use the Storm

The ever-approaching storm rages endlessly around you, and it's the biggest, most persistent threat in the game — outside of those 99 other well-armed savages. As the eye wall shrinks and your safe play space decreases with it, the idea of getting caught behind the blue can be a petrifying one. However, it can come to your aid in certain situations.

For every second that you're out in the storm, you will take one point of damage that bypasses shields and goes straight to your health. The longer the game goes on, the more damage the storm will do to you. That said, if your 're one of the late game survivors and the storm eye is getting very snug, hiding in the storm to get the drop on an enemy isn’t necessarily such a bad idea. Remember, when there’s only a handful of you left, the only objective is to win. It can be worth treating your health as a limited resource in order to do so.

The distance the storm closes in at will be at its largest early in the game, but the time when the storm starts moving after you're shown its trajectory is pretty long. It also moves slower earlier, so if you haven’t quite gotten into the safe zone in the early minutes of the game when the storm begins to grow, then don’t sweat it too much. Doing a mad dash to whatever shelter you can find can put you at pretty big risk when there are still 60-70 people around, so don’t compromise your low profile. The storm is unlikely to catch you if you’re making steady progress. Lingering right by the edge of the storm is often a good strategy if you’re forced to relocate. 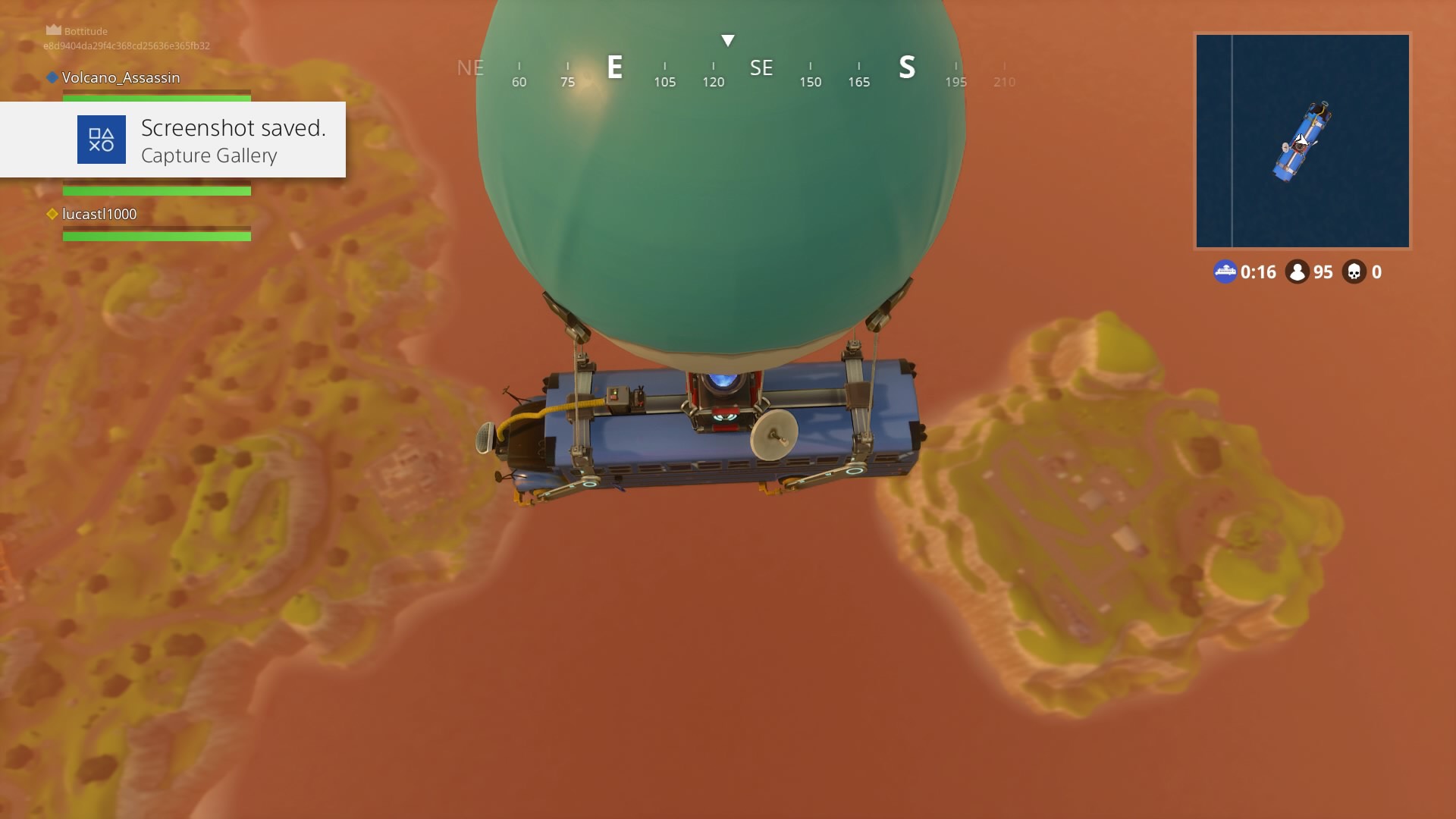 Outside of the mainland, your battle bus will sometimes fly curiously close to a small island that’s just off shore. You'll be tempted to glide over to it to see what’s what. I’ll pleading with you to curb that temptation.

The island will grow in view as you glide and you’ll recognize it as the very airstrip that your battle bus left from, illustrated by the exact replica of the bus sitting on the runway. Just when you get close enough to guarantee you’d make it… SPLAT! You hit an invisible wall, and slide slowly to your watery grave.

If you need any more information to help you be a badass Mary Poppins, stop by the Fortnite Wiki.

Cuphead is a Love Letter to 1930s Animation, and a Challenging Ode to Hardcore Platforming