When Cuphead and Mugman press their luck a little too far in King Dice's casino, their souls are collected by The Devil himself. The only way to free themselves from The Devil's claws is to do his dirty work, collecting contracts from other would-be damned in hopes to gain your freedom. Studio MDHR makes that task difficult, as Cuphead is as challenging as it is charming. May this guide help you take your first steps on onto the Ink Islands gracefully. 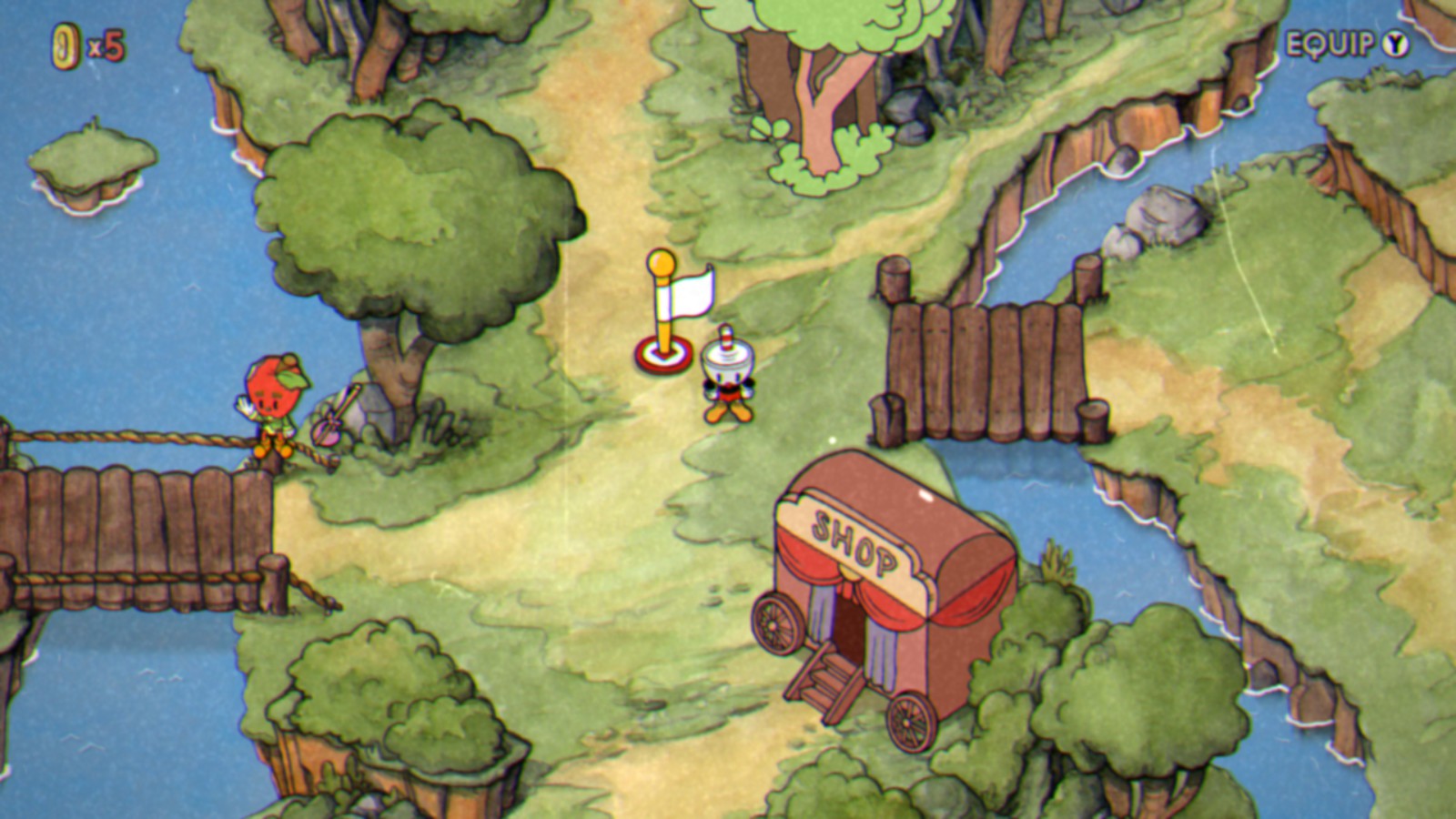 Cuphead only has one run speed, but can duck and shoot in all directions. If you hold down the lock button while shooting, he can shoot in those directions without moving. Cuphead has a dash that he can use on the ground and at any point during a jump. Be careful though, he isn't invulnerable during these dashes (unless he has a special charm). He has a parry maneuver as well, but we will cover that in more depth later.

Cuphead can carry two weapons into battle at one time, and can switch between them at will. He can't select new weapons while in a stage though, you have have to plan ahead on the island map. Every time a shot hits an enemy, Cuphead gains a little bit of EX meter, illustrated by the playing cards in the lower left hand corner. When the card is turned over to reveal its face, he has a full point, which can be used to launch EX attacks. Cuphead only has three hit points (four with a special charm), and if you lose them all at any point during a stage, you are sent back to the beginning to do it all over again. RIP Checkpoints.

The island map is where you'll initiate your battles and organize your weapons and upgrades. Locations will be blocked off and can only be opened by defeating bosses or completing Run N Gun challenges. You won't be able to leave each island without collecting the contracts of every boss on your list. 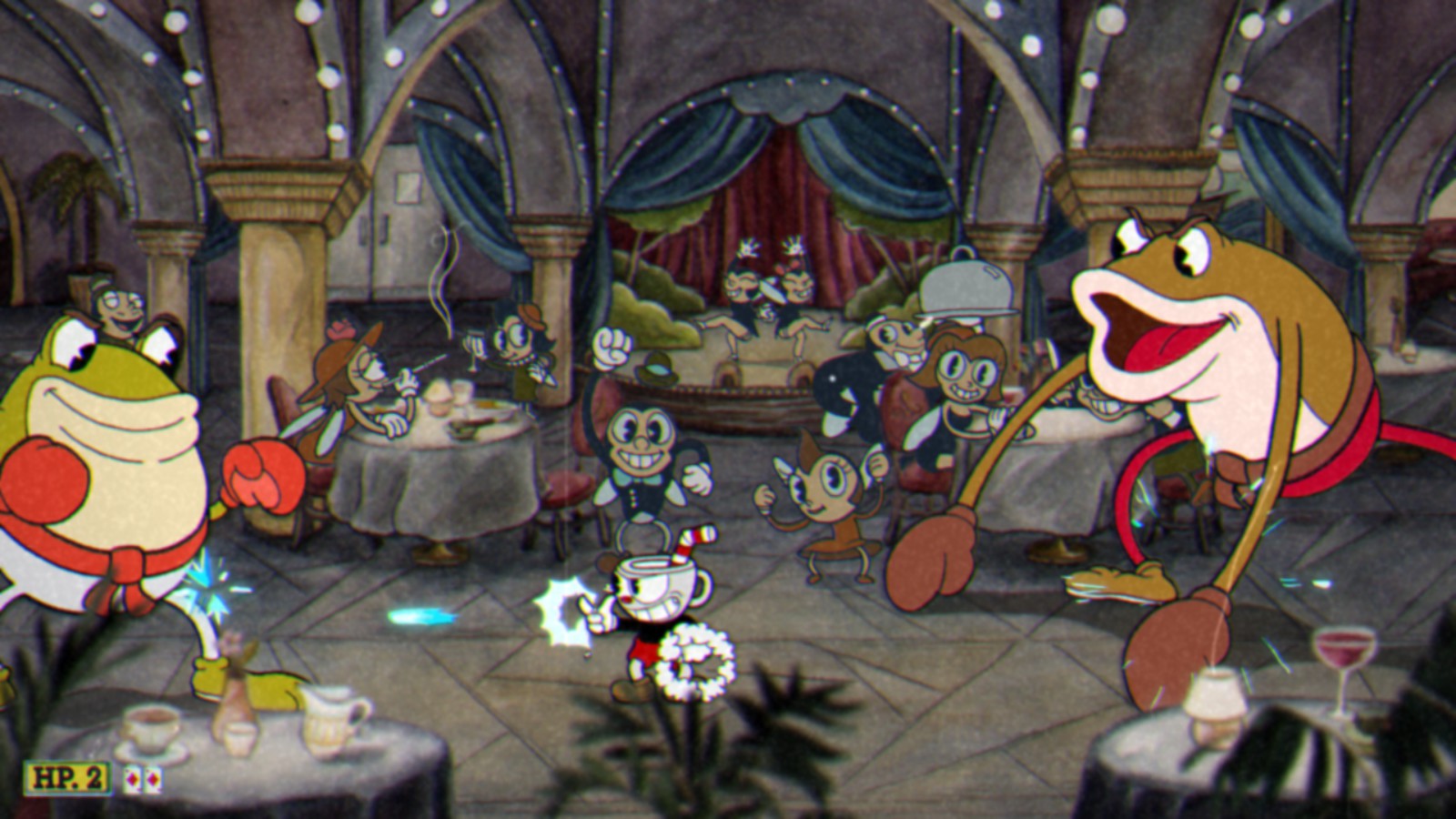 There are two different kinds of stages in Cuphead,  Bosses and Run N Guns.

Boss levels are a stage that literally only has the boss in it. Don't think this makes it a cinch, though. Bosses can dispatch you quickly with a rapid array of attacks and maneuvers that often coalesce into walls of pain when combined together. When you lose against a boss, you'll notice the game over screen features a diagram of a Cuphead silhouette moving along a track, passing certain thresholds. This is a good illustration of how much progress you made during the bout, how many forms the boss already took, and how many more remain. Boss stages also come in two types, normal and airplane modes. The airplane battles limit your offense and mobility to that of the airplane, so your purchased weapons and special moves like your dash are replaced with airplane weaponry and a shrinking ability.

The other stage type is the Run N Gun. They most resemble your average 2D platformer, like Mega Man or Contra. The only goal is to make it to the end, but know that Run N Guns are going to be your primary source for coins. These levels are challenging in their own right, so the reward definitely requires risk. Both Boss stages and Run N Guns must be beaten to open paths on the map, though not all Run N Guns are mandatory. 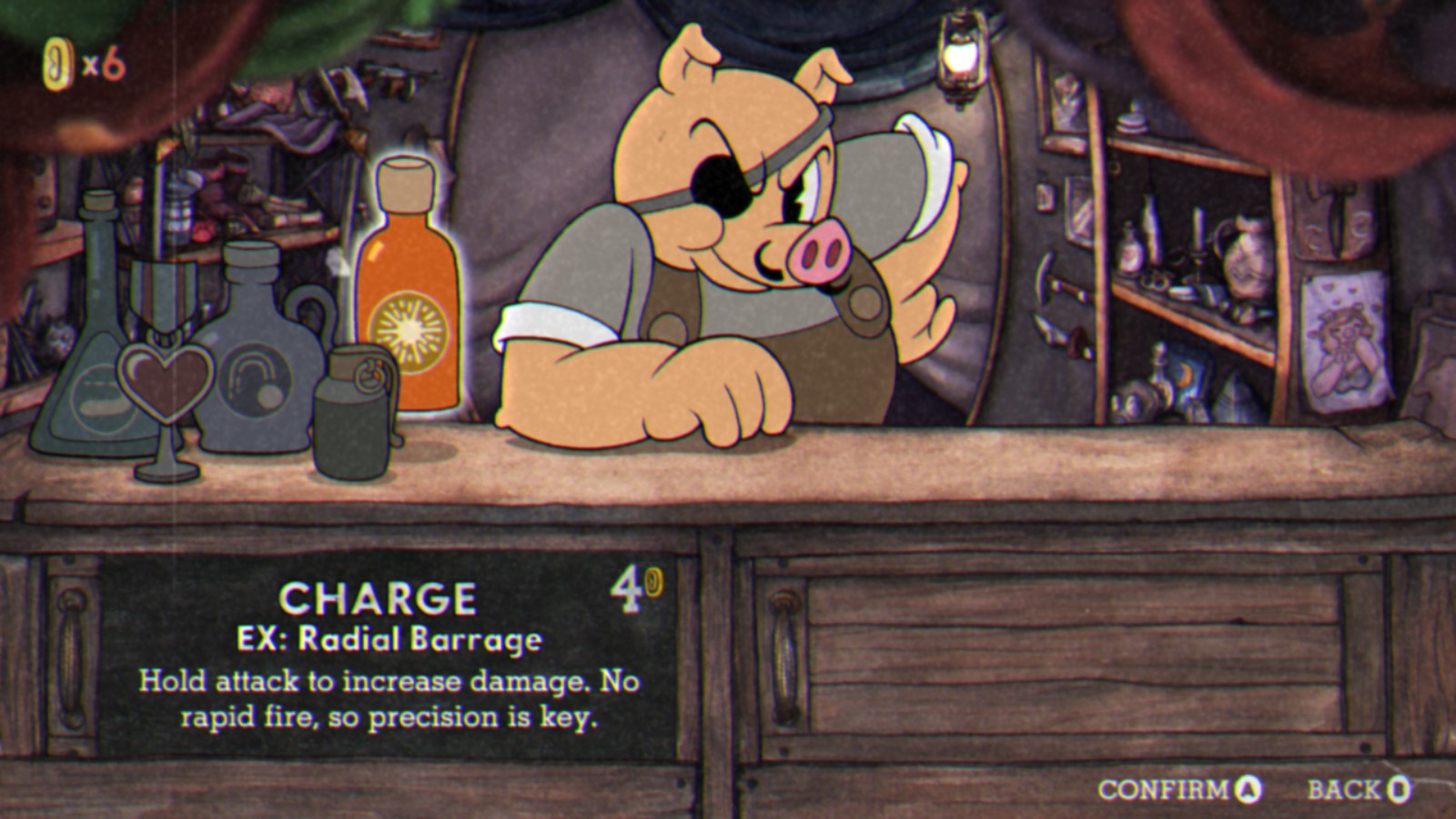 To make good use of those coins you earned in the Run N Guns, head to Porkrind's Shop Cart. There, you can buy new weapons and charms that will grant you new shot types and abilities. Weapons you buy come in many varieties - bouncing bubbles that do average damage, charging shots that take time to charge but do massive damage, etc. Buying a smattering when ever you can will help ensure that you have the right tool for any job. When you buy an item, a new one replaces it on his shelf.

Chaser and Spread are solid first purchases as far as shots good. Spread does a lot of damage at close range and Chaser will find the nearest enemy automatically, so you can focus on not being hit. When available, you should also purchase the Smoke Bomb charm, which allows you to dodge without taking damage. It can be a real life saver early on.

When selecting you loadout for any particular scenario, don't forget each shot's EX firing mode. These are big attacks that cost one of your EX meter cards, and do particularly unique things. Chaser's EX surrounds Cuphead with orbiting bullets that collide with whatever he comes into contact with. Spread's EX fires large projectiles in all eight directions. Choosing weapons solely because of their EX is a legitimate decision, sometimes.

That last equipment slot, Super, is for your Super abilities, which you actually can't buy from Porkrind. You must seek out the Mausoleums on each island, and protect the urn inside from ghosts. Upon success, you'll rewarded a Super move. Supers cost all of your EX cards, and let loose game changing abilities, like giving you temporary invulnerability. Seeking out these Mausoleums every time you hit a new island is paramount.

Maybe the most important thing you'll need to learn to do besides jumping and shooting is parrying. When in the air, hit the jump button again to do a spinning slap. When you connect with pink objects, you will parry them, destroying them and bouncing you higher into the air. Parrying is a vital skill to get down, as it can help you make paths through dense waves of bullets or help you get a little extra height for a jump.

Parrying is sometimes mandatory, as well. There are coins hidden in Run N Guns that are only accessible by parrying off of something first. There are some bosses who deploy attacks that will near guarantee damage unless you parry them. The only way to stop ghosts in the Mausoleums is through parrying. Parries even serve as switches to activate certain must use devices.

Learning the rhythms of parrying will unlock lots of added tactical depth. Parrying grants a great deal of EX meter, so the more you parry, the more opportunities you have to make big attacks. Know that parrying tends to be easier to do against things your moving towards, and objects that are below you. It's possible to jump up into a parry-able object, or to parry something attacking from behind, but the timing is just a wee bit different and can be tough to nail consistently. 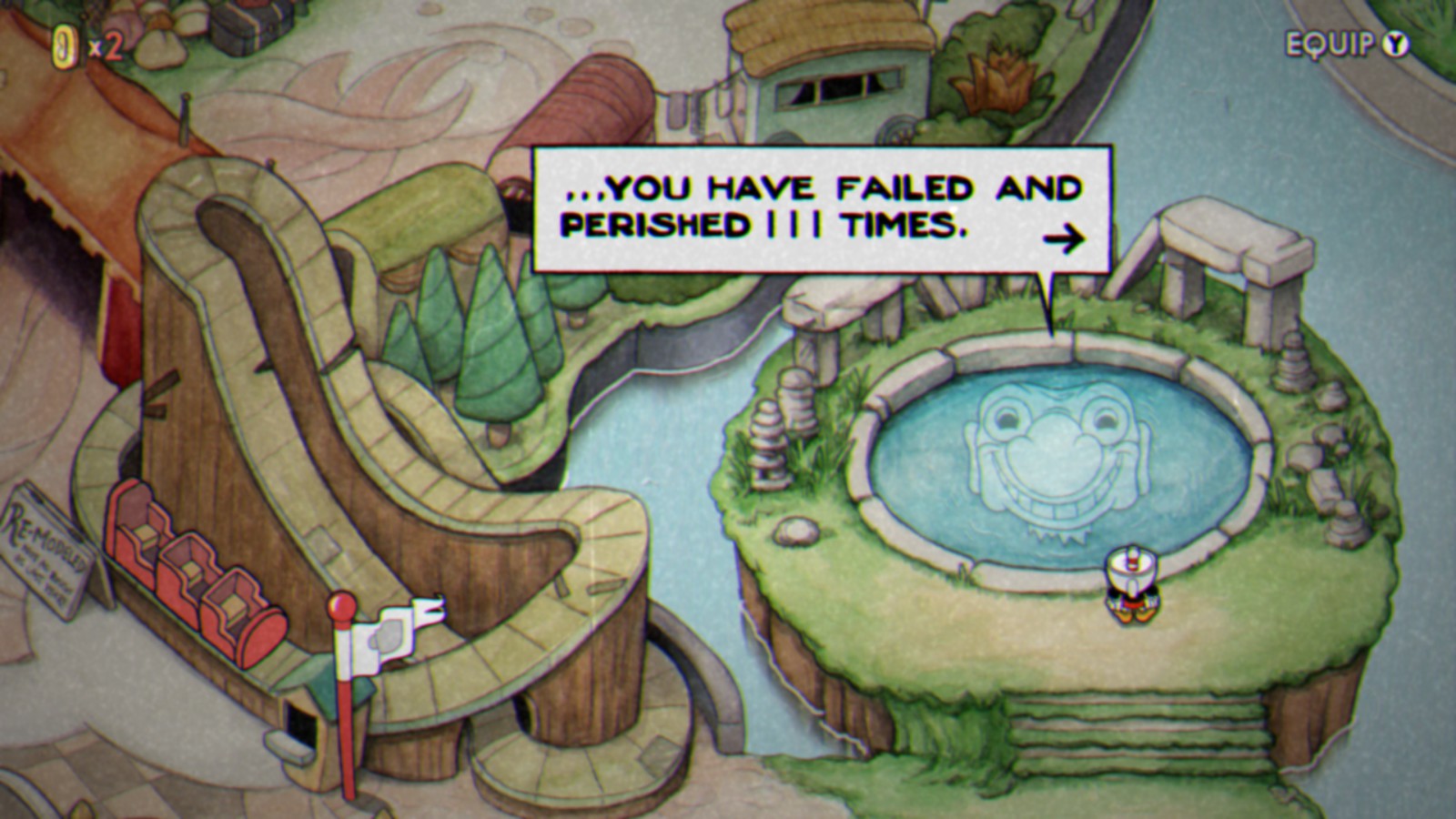 Don't Talk To This Guy

It's depressing. Just don't do it.

Need more information in order to survive your deal with the devil (or have some to add)? Check out the Cuphead wiki.

Cuphead is a Love Letter to 1930s Animation, and a Challenging Ode to Hardcore Platforming