When Destiny 2 comes to PC on October 24th, new guardians are going to have a lot of choices on their hands. For starters, there is which race to pick, which class to play, and which subclass they’ll want to specialize in.

They’ll also have options to customize their look with armor shaders. They'll need determine which exotic guns and armors they’ll want to pursue. And on top of all that, new guardians will also have to choose which faction they want to pledge their loyalty to.

Sounds like a bit of a Titan-sized order right?

But it doesn’t have to be. Choosing a faction won’t change how you experience the game, not like, say choosing Horde or Alliance in World of Warcraft might. Instead, you’ll have access to a unique cache of guns and armor (because really, isn’t that what this is all about anyway), each with a slightly different color scheme depending on which faction you pick.

So who to choose? What is each faction about and what do they stand for? Let this lore guide to Destiny 2's three core factions help you decide. 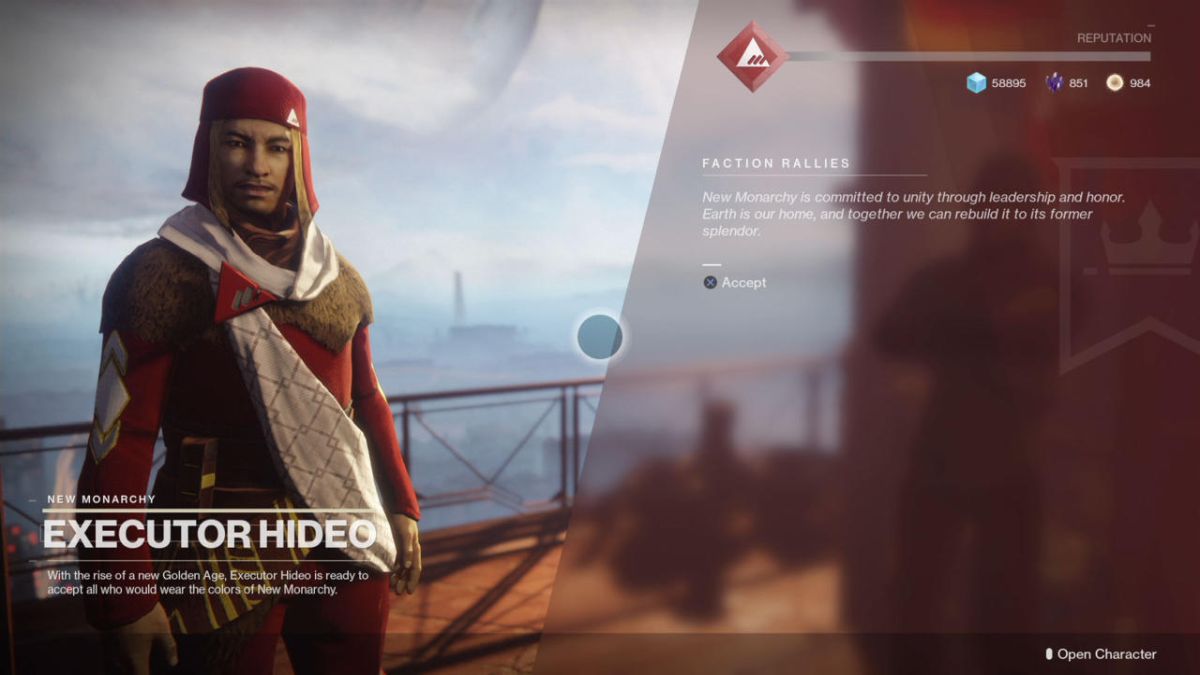 "Hope will be born from the collective triumphs of the king in us all."

It’s hard to look at the wealth of human history, examine life under absolute monarchies and other authoritarian regimes, and go ‘yeah let’s bring that back!’ But the New Monarchy faction led by Executor Hideo wants exactly that. They believe that the City, with it’s current system Vanguards and the Speaker, leave the city weak. They believe the best way to usher in a new Golden Age for humanity is for the city to be united under “a single sovereign of unimpeachable character.”

That potentially alarming caveat aside, on paper the New Monarchy is a faction of inclusiveness and improvement. They’re guided by the principle of “Together we rise," along with seven tenants all designed to promote harmony and collective advancement within the city walls. Overall the New Monarchy might be a pretty decent faction, if you can get over the whole enlightened despotism bit. 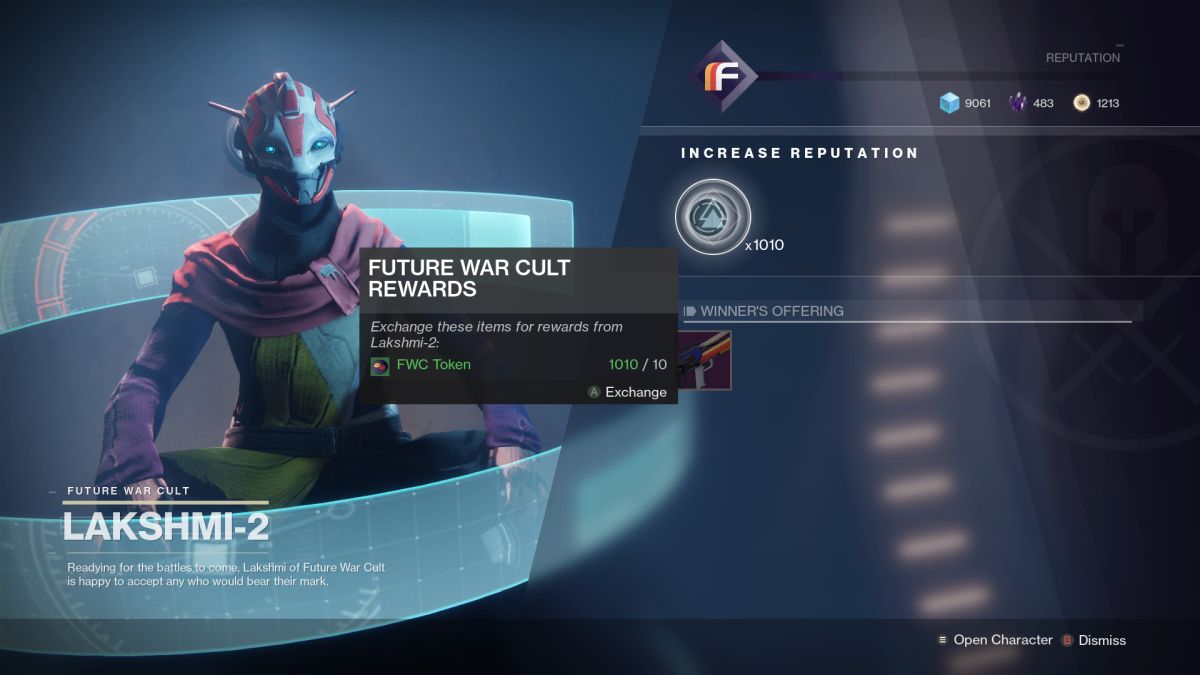 "There is no future but now. No truth but war."

The faction, led by Exo Lakshmi-2, believes that humanity is destined for endless struggle. War is what led them here to the Last City and war is the only guarantee of the future– well that and taxes. Adherents of the Future War Cult are like Doomsday preppers, always on the lookout for the next big thing that’s gonna try to wipe everybody out. And they’ll be the ones with the guns and the skills to fight it. 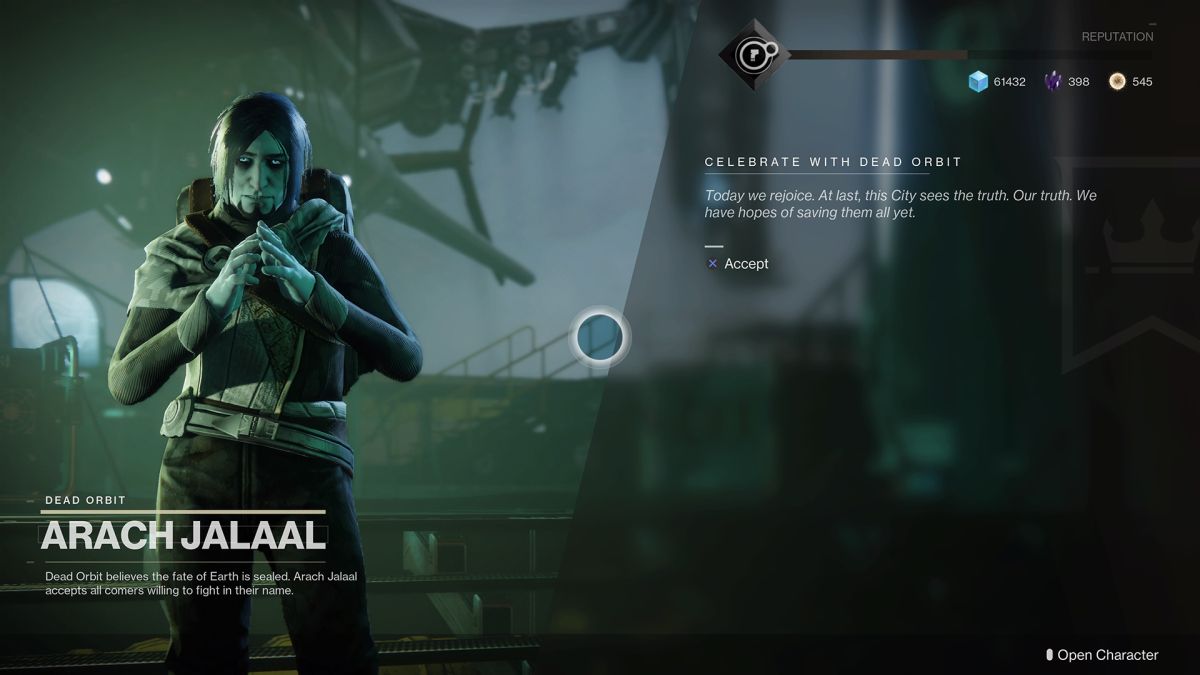 "The Traveler is not our only salvation. Another future lies out among the light of other stars."

The guardians of Dead Orbit are the most cheerful people you'll ever meet in the Last City. Honest. Their boundless optimism stems from their belief that the Earth is doomed, the Traveler is a death magnet, and everybody would just be much better off if we packed up everything and found a new home. Led by the sunny Arach Jalaal, Dead Orbit devotes all their time and energy into securing the resources they'll need to find a new home beyond the Sol system. They skirt the law and plunder places they shouldn't in their never ending quest to find lost vaults that might contain the power they need to leave the solar system.

But they know not everyone will make it, after all they put dead in their name. Like Future War Cult, the name "Dead Orbit" kind of lets you know exactly what you're getting into.

So there you have it. Three factions, three wildly different approaches to life in the Last City. Which one will you choose? Let me know below and check out our growing wiki for more information about Destiny 2.