Star Wars Battlefront II adds a feature-length campaign to the shooter’s suite of multiplayer offerings, telling the story of elite Imperial commando Iden Versio in the months following the Empire’s defeat at the Battle of Endor. The plot isn’t one that will simply into the background of the Star Wars universe, either, as it fills in some pretty essential pieces that help bridge the gap between Episode VI, Return of the Jedi, and Episode VII, The Force Awakens. We’re going to run down five of the most pertinent details here, so you’ll be all prepared for your next viewing of The Force Awakens. Naturally, there will be spoilers.

Star Wars is all about redemption, so many fans were predicting from the start that Iden Versio would have a change of heart, drop her Imperial ways, and join up with the good guys. And yep, that exact turn happens less than halfway into the story. Iden and her crew become Rebels, crossing paths with fundamental characters like Princess Leia, Han Solo, and Lando Calrissian during the early days leading to the formation of the New Republic.

Of particular note is Iden’s role in the battle to liberate Naboo, whose support was integral to the reformation of the Senate and the restoration of democratic government throughout the galaxy. The politics of the situation were more fully explored in the Shattered Empire comic series, but Battlefront offers more insight into the Imperial campaign that led to the siege of Naboo.

That campaign was Operation: Cinder, a desperate, destructive attempt to restore the Empire’s reign of terror over the galaxy following the Emperor’s death. It’s Operation: Cinder that ultimately leads to Iden’s change of heart, when her father—Imperial admiral Garrick Versio—orders the destruction of their homeworld, Vardos. 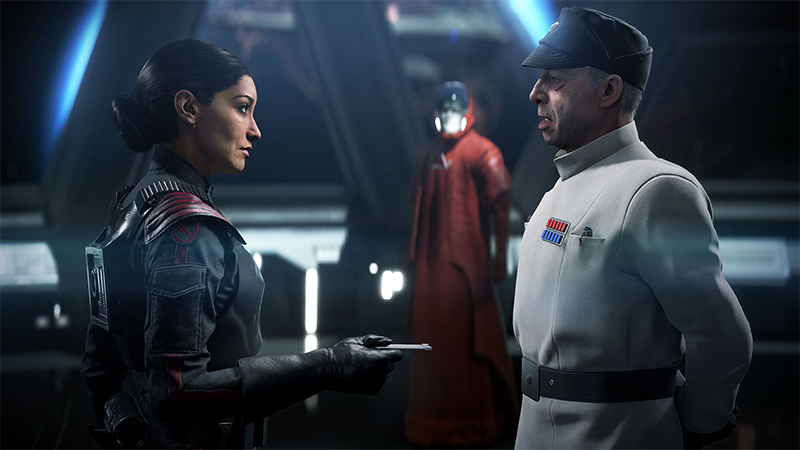 But while the Empire was in its violent death throes, it couldn’t last much longer. The Battle of Jakku served as the final stand of the Imperials, and while Battlefront II isn’t the first time we’ve seen the battle depicted—most notably it was the subject of the Aftermath: Empire’s End novel— the game does serve as our most dramatic view of the event yet. Iden settles things with her father during the battle, as he is aboard one of the many crashed Star Destroyers that make up the ship graveyard on Rey’s homeworld year's later.

Even bigger details comes after you leave Iden’s story behind. We pick up the story decades after the Battle of Jakku, with Kylo Ren attempting to track down the map disclosing Luke Skywalker’s location—the same map he’s seeking out at the start of The Force Awakens. He discovers the map’s location inside the mind of Del Meeko, who married Iden following the Battle of Jakku. That information points Kylo toward Lor San Tekka on Jakku, setting the events of the new trilogy into motion. Sadly, Del does not survive the encounter.

But even more interestingly, Kylo’s infiltration of Del’s mind reveals that he and Iden had a daughter, whose name and identity are not revealed in-game. The timeline could make her just about the same age as Rey, whose parents remain one of the biggest mysteries of the new Star Wars trilogy. Could Iden and Del be Rey's parents? It’s certainly possible, and would perhaps be the biggest bombshell of all to drop ahead of The Last Jedi. The real question is whether such an integral detail to the trilogy would tie so directly to a game campaign plenty of movie-goers won’t be familiar with. It doesn't seem likely, but you never know. We’ll likely find out for sure in December. Either way, we have not seen the last of Iden Versio.