There is one game in the business that can effortlessly elicit "oohs," "ahhs," and completely baffled shrugs all at the same time. Hideo Kojima has always been a head-turner/scratcher in the video game industry, but with his next game, the mysterious Death Stranding, he's turning the confusion and wonder up to eleven.

From the little we've seen of it, Death Stranding seems to be saying a lot without saying much at all. However, there have been some threads and clues we can follow to help us get an idea of what's going on. Let's go over what we know about it so far.

What is Death Stranding?

Hideo Kojima, luminary director of the Zone of the Enders series and the Metal Gear Solid franchise, is now the head of his own development studio, and it's first project looks to be his magnum opus. Officially announced on Sony's E3 conference stage in 2016, Death Stranding has since appeared in the form of cryptic videos at several big industry events since.

Well, no one really knows for sure. Kojima described it as an action game that he wants to make "new and different" in an interview with IGN after the E3 reveal. Right after the newest footage debuted on the stage of the 2017 Game Awards, he opened up slightly about some other game play features. He explained an attempt to create an experience where in-game death is a congruent part of the total experience. An experience that might take place across different worlds (or dimensions)?

In the TGA trailer, the protagonist, Sam, is seemingly caught in a giant blast that consumes a shadowy fog beast and everyone around it. When he awakes, he is on what looks like an ocean floor, but after a quick examination, seems to be a briny reflection of the world he just left. This appears to be a sort of Game Over state, except the game doesn't end. You literally have an out-of-body experience, traveling distorted versions of the roads you've already traveled, to collect lost items and what not. For a limited time, you can explore this facsimile of the world, but you'll have to return to your previous "death site" before your time is up.

The difference between what sounds like a Souls-ian, rogue-lite death state and Death Stranding, is that when you return to the world of the living, the game acknowledges the events that led to your death, and you continue on from that point. Death is a significant part of playing the game, not just as a learning tool, but as a game molding experience.

Norman Reedus? Madds Mikkelson? Guillermo Del Toro? Yes! The main character, Sam, is played by the Boondock Saints and Walking Dead alum, which is a pretty big get in and of itself. Del Toro, of Pan's Labyrinth and Hellboy fame, was featured in one of the trailers pretty prominently, though were unsure exactly what role he will play in the game, if he plays one at all. Hannibal's Mikkelson will definitely play a prominent role in the game as well and appears to be a villain, but who his character is exactly is still closely under wraps. Until we know more, though, feel free to bask in the budding Kojima/Mikkelson bromance on Twitter. What should we call them? Maddeo? Hidmikkelson?

So what is Death Stranding about?

Well, that's a question that's harder to explain than it sounds. From what we can piece together across the three major trailers (especially the last one), Norman Reedus's Sam works on a corpse removal team. Why are their so many corpses to remove? Because this world seems to be under the invasion — or at least the constant threat — of creatures from another dimension.

Who or what the creatures are is currently unexplained, but they seem to be incorporeal when they want to be, leave trails of oil or tar where ever they go, and are remarkably bulletproof. They can kill without ever being seen, and the people who are aware of them are very afraid of them. What do they want? Why are they killing? No idea, but it does have something to do with the super strange rain that seems to drench the most recent trailer. Kojima calls it "Timefall," and it's origin is apparently not of this world. Maybe it's from the same plane of existence these ghost killers are from?

The Timefall is named aptly because it has a very bizarre relationship with time. The rain can seem to advance the effects of time on whatever it touches, growing plants at super speed, or reducing grown men to withering geriatrics like magic. And then there's the baby... 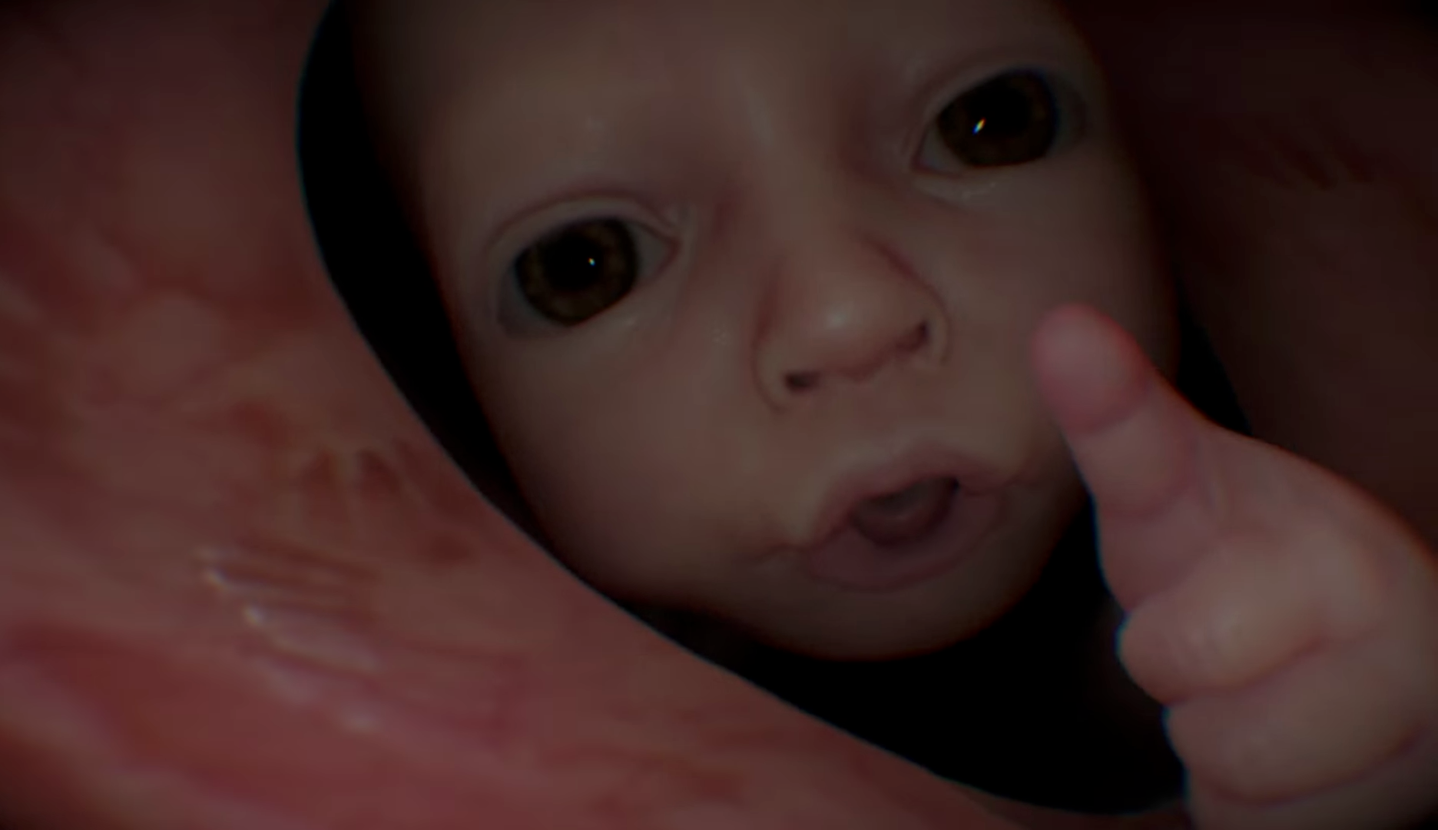 Oh yeah. Babies, or at the very least one baby in particular, play some kind of special purpose in the game, although exactly what that purpose is is anybody's guess. The baby has been featured in each trailer for the game, sometimes washed up on a beach, being transported in a carrying-jar or, in the case of the latest trailer, inside Sam's esophagus. Kojima says it's the same baby featured in each trailer and that he (or she?) has a role to play in terms of game mechanics and the story as a whole.

When will we play this game?

So, some months after initial reveal, Hideo Kojima said that Death Stranding would be out "before the Olympics," which we can assume means the 2020 Olympics in Japan. He would later move the slider a bit more, stating that "it will be out before the year in which Akira is set,” which is 2019, for those not up on their Otomo. Now, considering he made this announcement before he had a physical studio or had picked an engine to make the game in, I'm gonna be a bit skeptical about that second claim. I believe this game is coming out in 2018 like I believe a grown man can swallow a baby whole. A release date in 2019 or 2020 might not be unrealistic, though it could release even later. Who knows?

If your getting impatient, come to the Death Stranding wiki and pore over its knowledge. Or add to it!

Purrfect Date Is a Dating Sim That’s Impawsible to Resist

Monster Hunter: World Makes Drastic Advancements to the Franchise's Formula, and They're All For the Better