On January 26th, 2018, the long-running Monster Hunter series makes it largest play yet for the mainstream spotlight with the release of the gargantuan Monster Hunter: World. Its lush and gorgeous locales, absolutely huge play spaces, and terrifying predators have been updated for the HD, high resolution age. Coupled with a smattering of system-wide changes large and small, Monster Hunter publisher Capcom looks to really be hoping to capture the audience it’s missed out on these past 15 years.

As we near Monster Hunter World's arrival, now seems like the best time to recount the older, lower-poly moments of the series. Tracking its changes from humble Japanese beginnings to its breakout, worldwide success, you can see that Monster Hunter: World was almost inevitable. But that’s the future — let's look at the past. 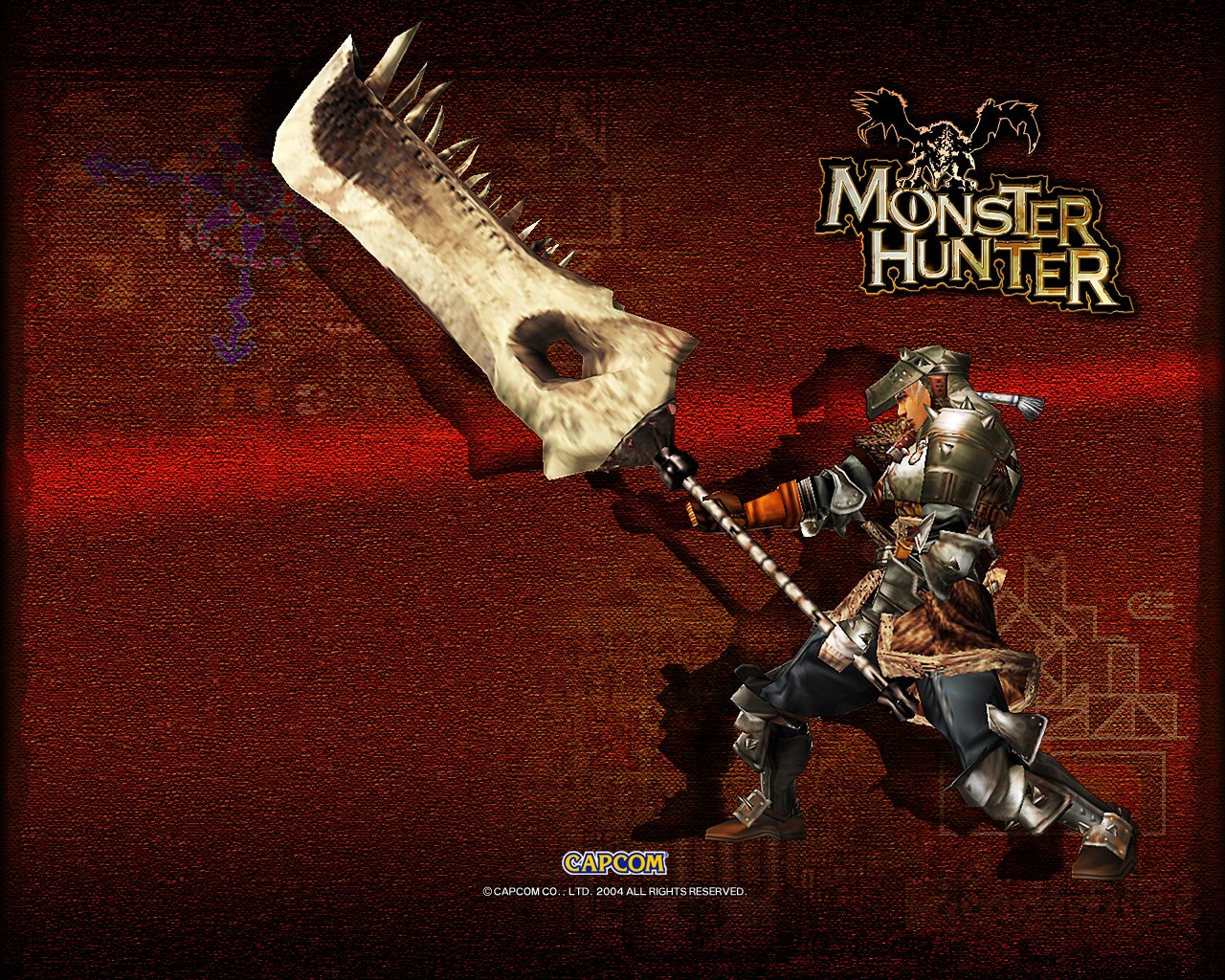 In 2004, the phenomenon was born. As one of three games specifically developed by Capcom to take advantage of the PS2’s network capabilities, online multiplayer was always one of the central pillars of the series. To its credit, it sorta nailed it, successfully recreating that Phantasy Star Online action RPG feel from the Dreamcast era, but draped in a nature-conservationist costume.

This is where the basic framework of every Monster Hunter game was built. Players were tasked with hunting giant beasts across multiple habitats, ranked in difficulty classes from 1 to 8. The three types of missions — Hunt, Gather, and Capture — were mixed and matched with various biomes and bosses to make an enormous variety of possible mission configurations. Once you succeeded, you were given rewards and opportunities to get materials (often directly from a slain trophy’s hide) to convert into new equipment. You used this stronger equipment to hunt stronger monsters, so on and so forth.

It launched to pretty average critical reception, and to a pretty limited audience. A second version of it, Monster Hunter G, would be released in Japan a year after. Considered an expansion, it added the Dual Swords weapon (bringing the total amount of playable weapons up to seven), and new variant versions of monsters. Monster Hunter G would be ported to the PSP in 2005 under the name Monster Hunter Freedom.

A sequel came pretty soon after the first game's expansion. Monster Hunter 2 hit the PlayStation 2 in 2006, and only in Japan. Its changes, besides enhanced graphics and new environments, were focused heavily on crafting and adding lots of meta systems.

Previously, only weapons could be upgraded, but now armor could be as well. Equipment could also be fitted with gems that would help provide armor sets with new passive abilities. Feyline kitchens, a farming and fishing spot at your home base, and new weapons (like the bow and longsword) expanded the possibilities into uncharted territory.

The PSP port, Monster Hunter Freedom 2, would be how the rest of the world experienced these changes in 2007. This is also the version of the game that started the trend of constant streams of free downloadable quests and items long after launch. Ultimately, the game was received similarly to the first, and is often cited as many a long time player’s first experience with the Monster Hunter series.

When the PlayStation 3 launched in late 2006, it left a lot of developers in a predicament. It had incredible processing power and graphical potential, but its proprietary Cell Broadband Engine with eight processors was not easy to work with. Capcom was not immune, and had to make tough decisions about which games they could reasonably develop for the console. The decision would eventually be made that Monster Hunter was just too cumbersome and expensive to develop on the PlayStation, and had to move elsewhere. That place would be the Nintendo Wii.

Monster Hunter Tri was sort of an awkward game, at first. Most of what we’d come to expect from Monster Hunter was there; the quest formula was still intact, and the myriad things to do in the hub town of Moga Village was reminiscent of hubs in the past. The environments were bigger and brighter, and it was easily the best looking game in the series at the time.

But three weapon classes were missing, replaced by a newcomer, the Switch Axe. Plus, the environments were bigger in order to accommodate underwater areas. Swimming was an awkward mechanic that became utterly maddening when fighting monsters simultaneously. The frustrating addition just introduced yet more slopes to a game that already had a very steep learning curve.

As is tradition with Monster Hunter, a portable port made its way to the Nintendo 3DS in 2013 called Monster Hunter 3 Ultimate. Co-released on the Wii U, it allowed cross platform saving and online play between the two systems, which was a pretty remarkable. It also added in the missing weapons, new monsters, and the return of G Rank missions — extra hard versions of the missions already available, that usually grant higher chances of rare items upon completion.

Because of the fact that the 3DS buttons were not the optimal assortment to get the most out of the game’s tense battles, most consider MH3U to be a rare misstep in an otherwise consistent series. However, Nintendo did later release the Circle Pad Pro accessory, providing a second analog stick and improving the MH3U experience greatly.

Monster Hunter 4 was a Japanese exclusive when it launched in fall of 2013. The global port, Monster Hunter 4 Ultimate, would follow more than a year later in February 2014. Capcom was starting to get wary about localizing these games in the west, as they never sold significantly. But a consistent campaign of interest from loyal gamers propelled the game to European and American shores.

Monster Hunter 4 would end up being the first game to sell over a million copies in North America. This is partially attributed to the overhaul of moving, climbing, and running in game. There was far more emphasis on verticality and being offensive while hanging off of cliffs or flying through the air.

One of the new weapons added, the insect glaive, was the perfect vehicle for aerial shenanigans that, when packed with the improved game-feel of traversal, created a game that didn't feel as scary to play for newcomers.

Mounting monsters was introduced here — stunning them to jump on their back and beat them to the ground while they attempt to buck you off. Monsters themselves interacted with their environment more. They could come crashing through rotted trees or fall through spider webs.

Thanks to all this, plus more crafting-related activities you could get into and a much more prominent story that whisked you across several diverse locales, Monster Hunter 4/Ultimate was hard to ignore.

The success of Monster Hunter 4 helped Generations become the best selling main series Monster Hunter game, moving 4.9 million copies from its Japanese launch in 2015 to now. It’s the only Monster Hunter game to not get an “upgraded expansion” version to come to the west to replace the original, mostly because Capcom had fully embraced offering all the “expansion” content like new monsters and gear completely through DLC at this point.

All lessons learned from previous Monster Hunter titles were applied to great effect in Generations. Outside of the enhancements we’d come to expect (new monsters, new locales, etc.), this Monster Hunter introduced a new set of systems called Hunter Styles and Hunter Arts. There were four new Hunter Styles to choose from, which changed the way you wielded the series’ staple weapons. Some styles gave you new moves, while others gave existing moves new properties. Hunter Arts were big time super moves that you could learn that had big, game changing repercussions when activated. Both systems were well received as welcome modifiers to the tried-and-true gameplay.

Feylines, the trusted cat-like counterparts that assisted you in combat throughout the series, were finally made playable in Generations. Prowler mode let you experience hunting mega monsters through the eyes of these diminutive partner pets, creating new ways to interact with maps and enemies that you’d become familiar with over the years.

As with many long-running video game series, Monster Hunter has a smattering of spin-offs and experimental titles that stand along side the main series. There are tons of spin-offs and it would be difficult to cover them all, but we'll touch on the most significant. Unusually, the Monster Hunter series' most popular title is a spin-off.

Selling 4.9 million copies, Monster Hunter Portable 3rd is not a remake or remaster of Monster Hunter Tri or Monster Hunter Freedom Unite. Instead, Portable 3rd is considered its own self-contained game. It is a completely remade experience compared to Freedom Unite, sporting a heavily Asian-inspired set of hub worlds, locations, and new monsters. It also enhanced and overhauled the feyline combat and growth systems, which changes that would show up in later Monster Hunter games. This game never made it out of Japan and Korea, which is significant because it sold so many copies without a global release.

A bunch of mobile games were developed with the license as well. Monster Hunter Dynamic Hunting was a tap heavy iOS game that cut out the exploration parts of the game and focused mainly on players fighting popular monsters from the main series. Combat heavily resembled Infinity Blade, a hugely popular mobile game at the time. Another big mobile effort, Monster Hunter Explore, tried to simplify the overall Monster Hunter experience into a quick and dirty version of itself. It was met with a lot of hype, but ultimately fizzled out.

Recently, a big hit of a spin-off was released on the 3DS called Monster Hunter Stories. Stories is a traditional JRPG take on the franchise, focusing heavily on the linear story of a character called Rider. Combat is turn-based, abandoning almost all the action elements of the series proper. It was well-received critically, sparking a lot of conversation about the future of this spin-off as its own series.

In late January 2018, Monster Hunter World will launch globally, marking the series’ first trip back to a Sony home console in years. It also brings with it an incredible amount of changes, tweaks, and upgrades that you can learn more about in our coverage of the closed beta back in December, or at our Monster Hunter wiki. January 26th can’t come fast enough!

Stash Is a Sandbox MMO All About Player Choice

What is They Are Billions, Steam’s Latest Early Access Hit?