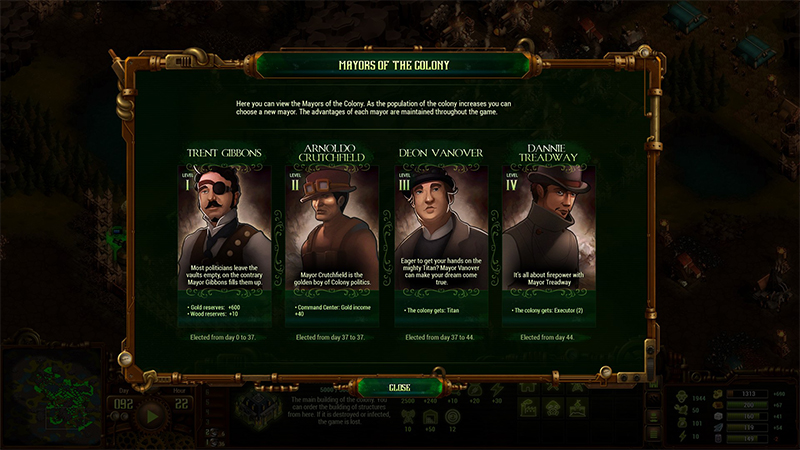 They Are Billions is a race against time, and you have to build your economy as efficiently as possible in order to be able to construct the defenses necessary to hold the zombie hordes at bay. The game’s Mayors offer you random chances to boost your economy in major ways, but if you’re just starting out it can be difficult to know which bonuses are most useful for you. Here’s what you need to know to make the best choices for survival.

Your Mayoral options are pulled randomly from list of dozens (if not hundreds), and you’ll get two candidates every time you reach one of the four population tiers.

The bonuses you’ll receive include things like free units, early research, or more long-term bonuses to production and upkeep. Here’s how you should prioritize those options, starting with some of the most powerful mayor bonuses and moving down to some less than great choices.

Permanent bonuses are by far the most useful because, well, they’re permanent. While a single unit might get destroyed and resources are easily spent, these bonuses will continue to help you throughout the game. A +20 bonus to gold production at Tier 1 doesn’t sound like much at first, until you realize that will add up to thousands over the course of the game. Bonuses to resource production, upkeep cost discounts, and unit or building strength are all similarly excellent.

That doesn’t mean you should pick one of these every single time, of course. Remember that your wood walls will soon be replaced by stone variants, so a +20% strength bonus to those structures won’t pay off for long. The same thing goes for units, since you probably won’t be making significant use of soldiers and rangers toward the end of the game — but if you can get the bonus that cheapens Titan builds, you’ll be at a significant advantage when building your defenses for the finale.

The usefulness of early research depends greatly on how far away you are from building the next research center. If it’s already constructed, you’re just a few minutes and a couple thousand gold away from the next upgrade. On the other hand, if you’re struggling to gather particular resources, a bit of early research can really kickstart your economy. Early farms, for example, will greatly increase your food production, broadening your options for early growth. These research bonuses are most useful in the beginning stages of the game, letting you get the jump on building your economy.

Always stop and consider carefully before choosing a Mayor granting a unit or building. As with research, the usefulness of these bonuses is closely tied to how close you are to being able to construct them normally. A few wood walls are almost always useless since they’re easy to construct normally, but if you get the option to take a late-game unit early on, it might just be worthwhile. Remember that you’ll still have to pay upkeep costs for any new units you get, but this can be a handy way to get a Titan or a Lucifer before you’re producing oil — and that upkeep is basically free if you’re not producing that resource.

These choices are nearly useless. They rarely account for more than a day or two’s worth of income, and you can probably get similar resource bonuses just by finding caches on the map. There’s almost always a better choice.

For more details on all your options, be sure to check out the They Are Billions Wiki.