Before 2016, we weren’t sure how the Metal Gear Solid franchise — as famed for being as socially and politically poignant as it is bizarre and quirky — could get any stranger. Then Konami announced Metal Gear Survive. It's a spin-off no one expected, considering how the relationship between the studio and series creator Hideo Kojima ended back in 2015.

At face value, it’s difficult to see how Survive is related to Solid at all. Story wise, there’s no mention of soldier states or triple agents, and not a single Snake or FOX to be found. Gameplay wise, the signature sneaking and stabbing has been replaced by open-world running and gunning (and sneaking and stabbing), along with a Fortnite-style Horde defense mode.

The Metal Gear Survive website gives us a little more insight on how we can connect this back to the main line lore: 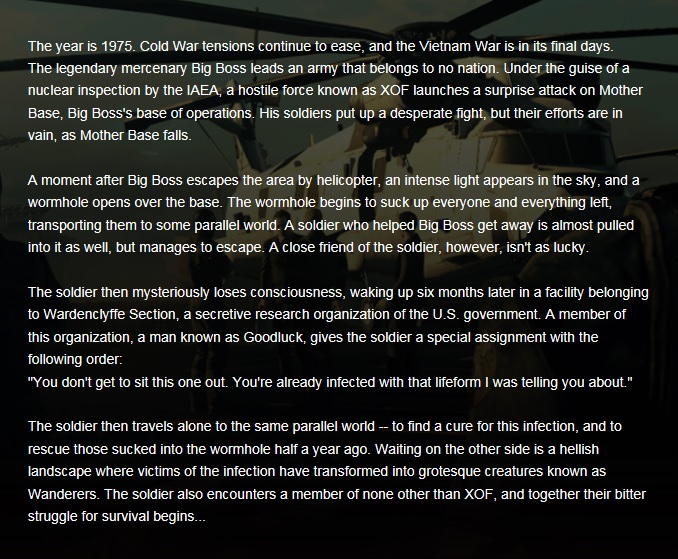 When you first get dropped into the hellscape provided in the open beta, fans of The Phantom Pain especially will recognize that they're in an Afghanistan, only this they’re in as a twisted, bizarro version of the one in 2015’s instant classic. The grey, desiccated landscape is covered in goopy black pools of something seemingly liquid and definitely awful. The air is thick with a caustic miasma, covering everything in a thick haze. Mangled pieces of Mother Base sit sunken in the soil, somehow even more out of place in this world than you.

Then there’s the denizens, concrete-colored humanoids that resemble other XOF soldiers like you from the neck down. Red, crystalline growths sprout where their heads should be, giving off immediate The Last of Us Clicker vibes. Their behavior, erratic and instinctively aggressive, gives these so-called Wanderers a zombie-like air. Metal Gear Survive’s ultimate goal is to protect vital points in this blasted land from hundreds of creatures just like this.

Before you are jettisoned into this sunken place, you hit a room of endless white, highly reminiscent of the loading room in The Matrix in its sterility. Here, you basically do just what the crew of the Nebuchadnezzar did: gear up for the mission ahead. You can outfit your soldier with weapons and items familiar to the series, like pistols and medkits. You can also take new types of gear with you, like a smattering of traps and an expanded suite of melee weapons. When you’re outfitted to your desires, you select a mission and extract.

When your boots hit the ground, your first major goal is to find the defense zone that will house the Wormhole Digger rig you're going to protect. What that usually means in reality is that you’ll spend the next four and a half minutes running around and gathering resources before the drill starts automatically. Broken wooden boxes, ceramic tableware, rubber tires, and more are all on the menu, as you crouch walk through buildings mashing Square relentlessly. And it’s all important, because they all provide necessary materials for all the craftable obstacles you’ll need to construct before the tide of crystal horrors descends on you.

The UI can be a chore to navigate, but once you learn the language, the crafting system is pretty straight forward. If you have the pattern for the item you want to make, all you have to do is select it from a list at the appropriate workbench, hold down the craft button, and voila! Materials are automatically exchanged for bullets, or barbed wire fences, or whatever your industrious little heart desires.

Finding the right spots for proper placement of obstacles is made easy, thanks to your enemies' movement directions being clearly marked on the land in front of you. You’ll know exactly where the enemy plans to enter your base, and as such you'll be able to board it up and hunker down accordingly. When the wave starts and the enemies begin to pummel your defenses, you need to be quick to respond. Dedicated abuse from the mindless horde will punch through everything, given enough time.

This becomes a more serious threat as waves progress, and different enemy types emerge. Stabbing with the reach of a spear over a barricade is a good technique versus Wanderers, but taking down Armored versions of them requires a little more gusto. Bombers are highly volatile and incredibly destructive, tailor-made to evaporate hard defenses, and must be dispatched from a safe distance. Trackers can leap over defenses and infiltrate your back lines with uncanny agility and speed, and have to be dealt with before they can sabotage your efforts from the inside out.

Between waves (and sometimes during them), secondary missions will appear, tasking you with venturing outside of the base camp to secure resources. Sometimes this is a package that gives you a one-time boost of crafting materials. One mission specifically allows you to secure an ammo reloading bench for the base that reloads all of the user’s equipped weapons. Arguably the best secondary mission loot in the beta comes from securing a pair of Walkers — spry, bipedal gun platforms that can make a huge difference when waves get particularly daunting.

Upon successful defense of the Wormhole Digger, you are rewarded based on the amount of Eris, another unexplained but probably important resource that establishes the rank of your performance, and sent back to the White Room. Materials you’ve gathered carry over, and repeated trips into the void help you progress into better, more dangerously equipped agent of inter-dimensional chaos. The more you play and horde away, the more elaborate and capable your defenses become.

It sounds nothing like a Metal Gear game, and it’s fair to say that it isn’t really. But after a weekend of play, there is still some identifiable connective tissue between the series proper and this odd spin-off. Outside of the patchwork narrative conceit, Survive plays almost exactly like The Phantom Pain, which is maybe the most fluid, adaptable, and responsive installment in the series. It’s not distract-guards-with-adult-magazines quirky, but build a spinning blade or balloon trap and you’ll see that it still retains at least some shades of its colorful sense of humor.

There is still a lot to be seen and proven when it comes to Metal Gear Survive, but this beta proves that this experiment is off to a promising start. We will know more when it launches in February, but until then, read up on it at via the Metal Gear Survive wiki.