Part Smash Bros, part Final Fantasy, part sentient loot box, Dissidia Final Fantasy Opera Omnia is Square Enix’s latest foray into the mobile gaming market (as well as a valiant attempt to try make Latin words cool again.) All your favorite characters — Cloud, Squall, and Tifa — some of your less-favorite characters — Shadow, Yuffie, and Laguna — and even some of the characters you’ve probably never even heard of before — Rem, Firion, and the Onion Knight — join forces in a kind of Final Fantasy fantasy league to take down the forces of evil and save the world.

Opera Omnia has a fun story and a robust combat system that, surprisingly enough, makes this title more compelling than any free-to-play gacha game has a right to be.

But it’s also confusing as heck.

If you’re a casual Final Fantasy fan like me, and you just want to see Cloud and Squall fight together outside of fanfiction, getting a hang of Opera Omnia might be a little intimidating.

Here’s a quick (sorta, this game is deep y’all) rundown of how the game works, and how to get the most out of Opera Omnia. 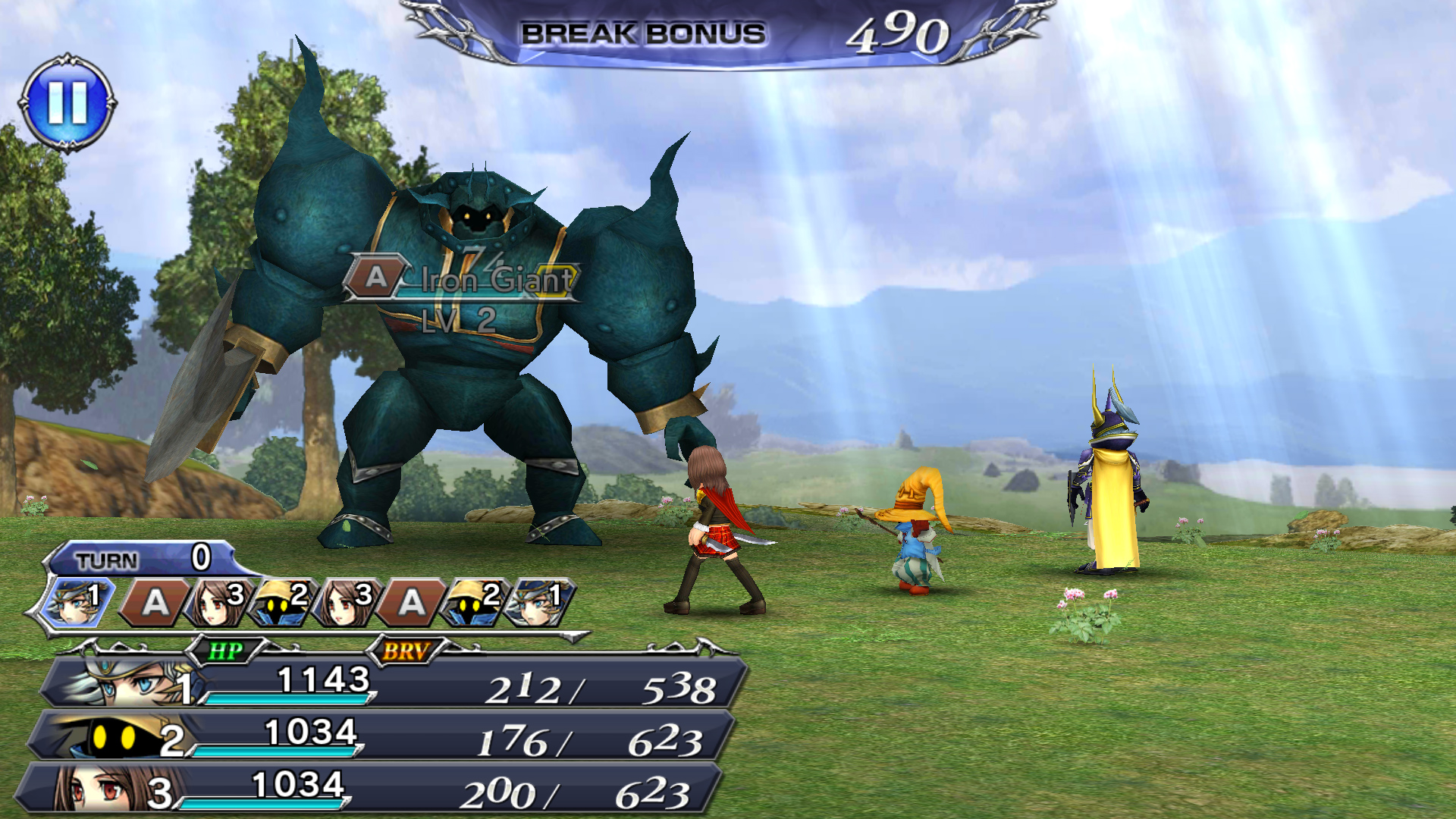 For me, the most challenging element of this game is understanding its combat. 90 percent of your time is going to be spent fighting monsters for quests, dungeons, or events, so you want to have a firm grasp of how combat works. Unfortunately, the tutorial is extremely brief and is only likely to remain in your mind for a mission or two before you forget it entirely. Here’s what you need to remember: Always Be Braving.

Opera Omnia has two critical stats to keep track of: HP and Bravery. HP should be familiar to you, as it works the same as it does across literally every other video game — if your HP drops to 0, you’re dead.

Bravery, however, is a little more unfamiliar. Think of it like attack power, in that the higher it is, the harder you’ll hit your enemies.

Attacks in Omnia are divided into two types: Bravery Attacks and HP Attacks. Bravery attacks increase your Bravery (or BRV as it’s indicated in the game) while depleting your enemies BRV and vice versa. In combat, you want to maximize your BRV then unleash your HP attacks. The higher your BRV, the more damage your HP attack will do.

Deplete an enemy’s BRV and it enters Broken status. That means any HP attack the Broken enemy (or ally) does will always yield 0 damage, while any BRV attack made against it will be a critical hit. This is why you should be careful when you use HP attacks, because you leave yourself open to being Broken.

Remember staggering from Final Fantasy XIII, that Final Fantasy everyone unequivocally hated, even though it probably didn’t deserve it? The Bravery Attack + HP Attack system works a lot like that. Use BRV attacks until your opponent is Broken (or staggered), then use HP attacks to inflict maximum damage. Be careful though, because afterwards you’ll be susceptible to the same treatment.

Armed with this knowledge, you’ll be 50 percent less likely to spam whatever attack seems fitting in the moment, but it does nothing to help you understand the next bit — character progression. 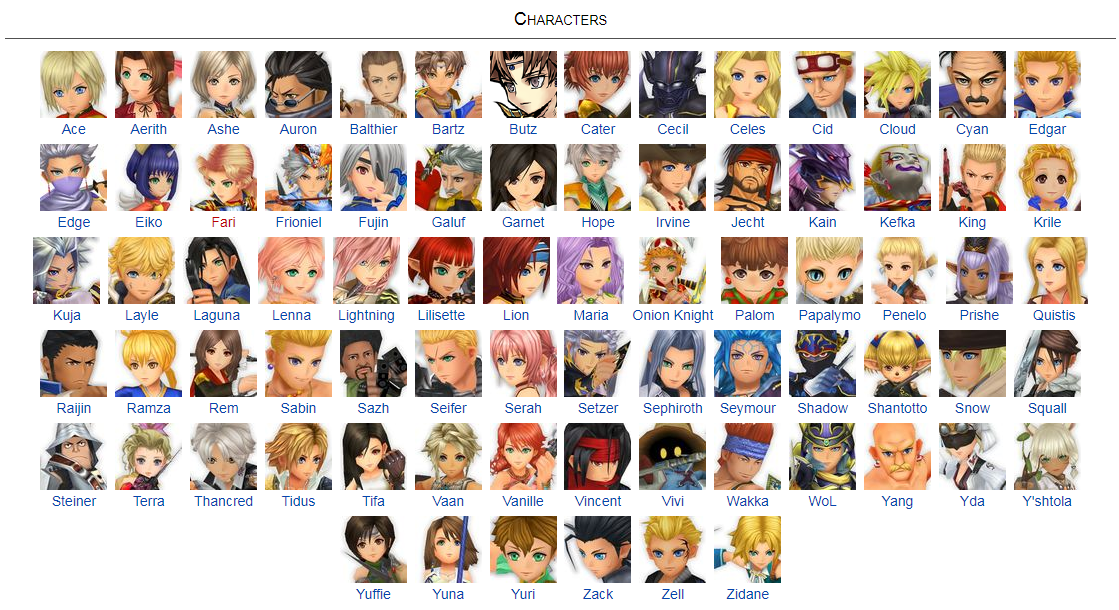 Omnia is a gacha game, so at some point you’re going to encounter a mechanic that screams ‘please give me your money’. That’s the progression system. Gems, crystals, tickets, keys, all can be purchased in the shop, and all are vital to getting the most out of your game.

Gems are the basic currency of the game. Gems buy EXP bonuses, inventory upgrades, and — most importantly — draw chances, can be purchased with gems. Earn them through completing missions or quests, or by straight up buying them from the shop.

Need to get your Bartz to level 10 in a hurry? Buy a Book of Training and increase his EXP. Need more Gil to upgrade items, or more inventory space to hold sweet loot? Find a corresponding item in the item shop. Anything you think your character needs to level up, it’s there... for a price. 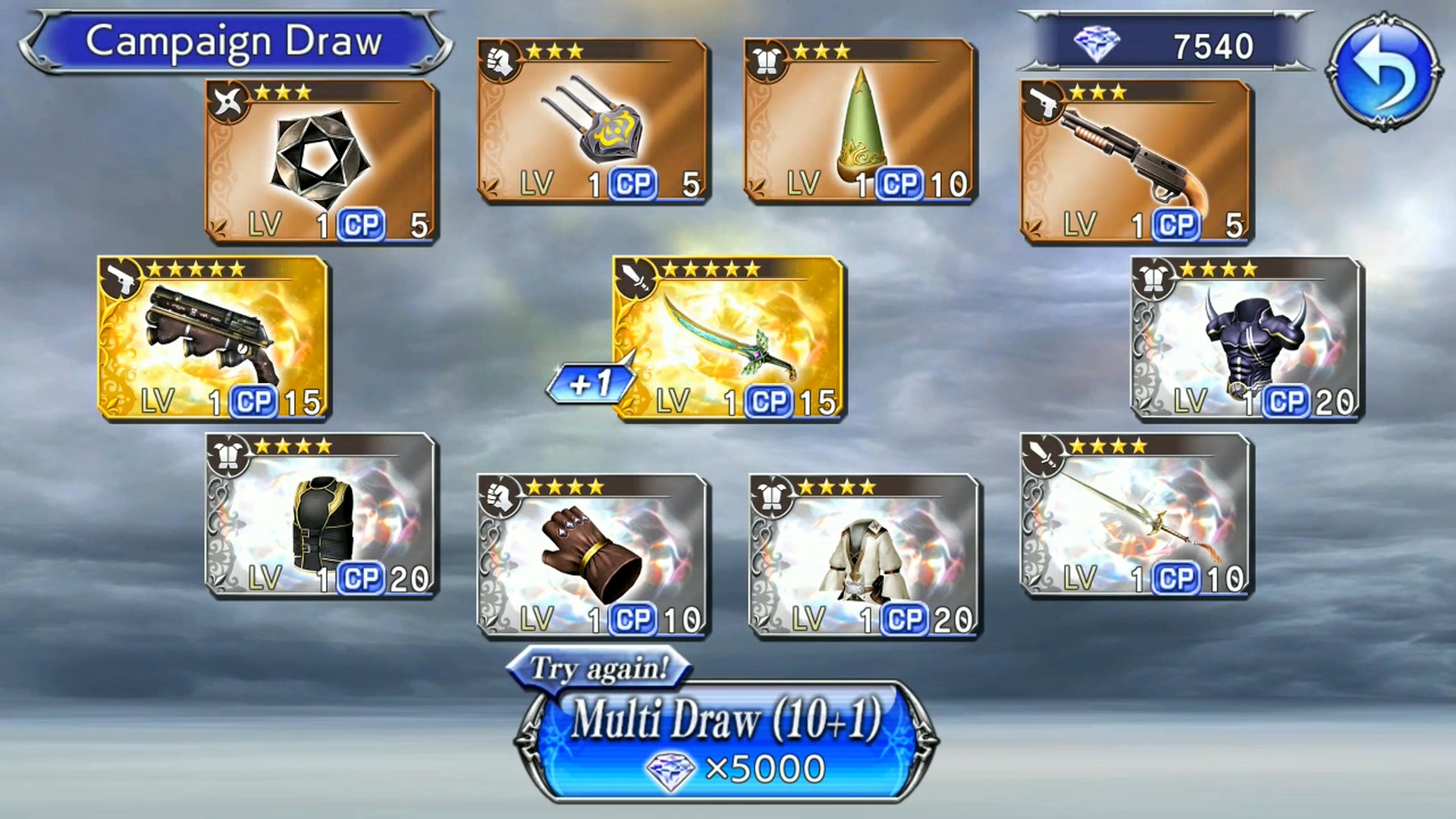 Draws are like pulls on a slot machine, and they're how you secure the best weapons and armors in the game. The items that will ensure that you’re able to defeat dungeons, complete events, and earn more gems so you can earn more draws for more equipment and... you get the idea. But draws cost gems, and gems cost either money or time (which is also money, I’m told.) Keep an eye out for different events in the Info pane. They’ll let you know which Draw Events will yield a high quality item for your favorite characters. 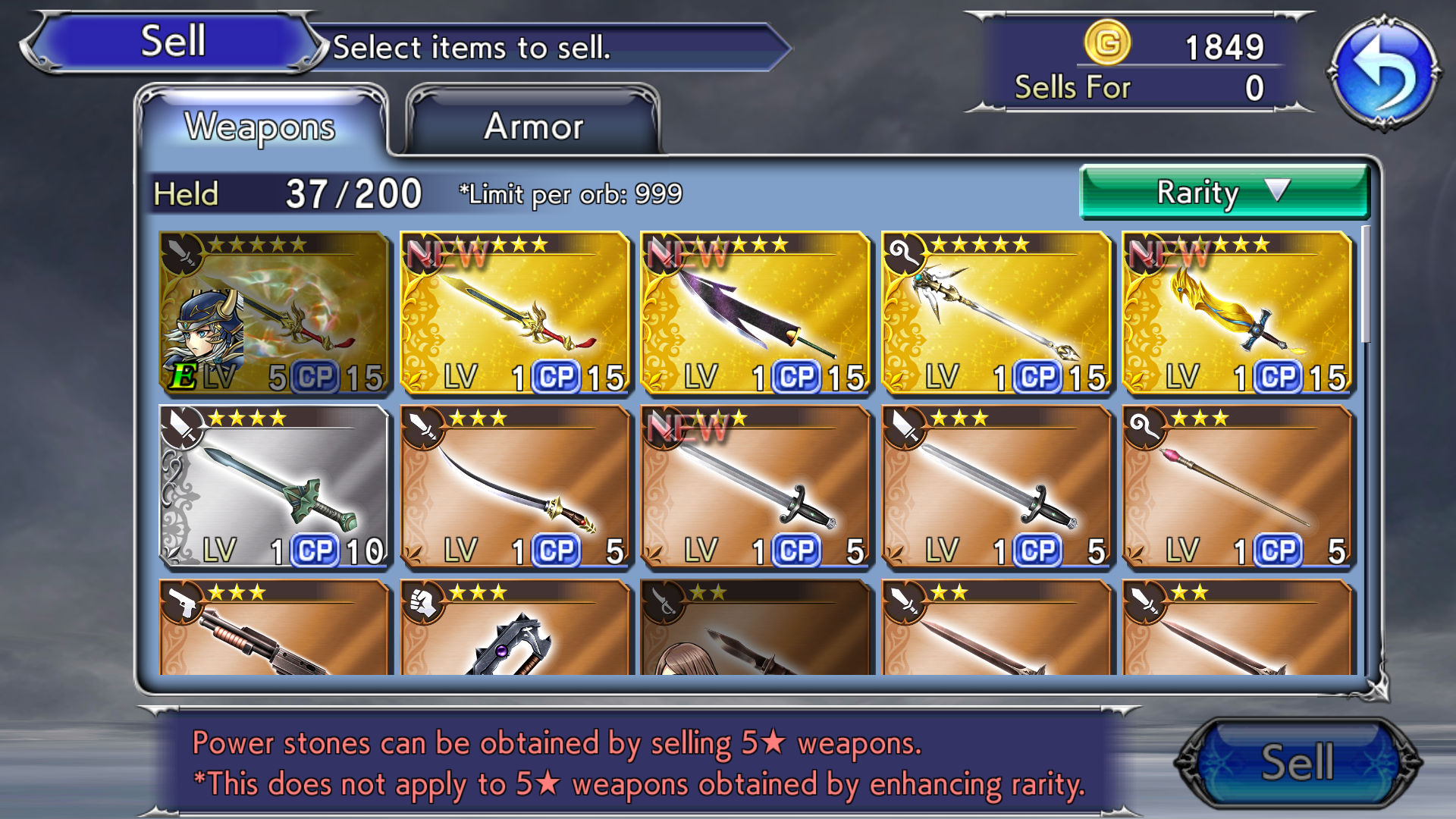 Weapons and Armor are earned through draws and they’re upgraded by sacrificing other weapons and armor and power stones. Upgrade your item with the exact same item and you’ll limit break it, providing the maximum attack, bravery, and defense bonuses. Limit break your item three times and you can equip its ability as a passive ability to any one of your characters. Draw as often as you can, so you can limit break as often as you can so you can outfit your characters with maxed out equipment. 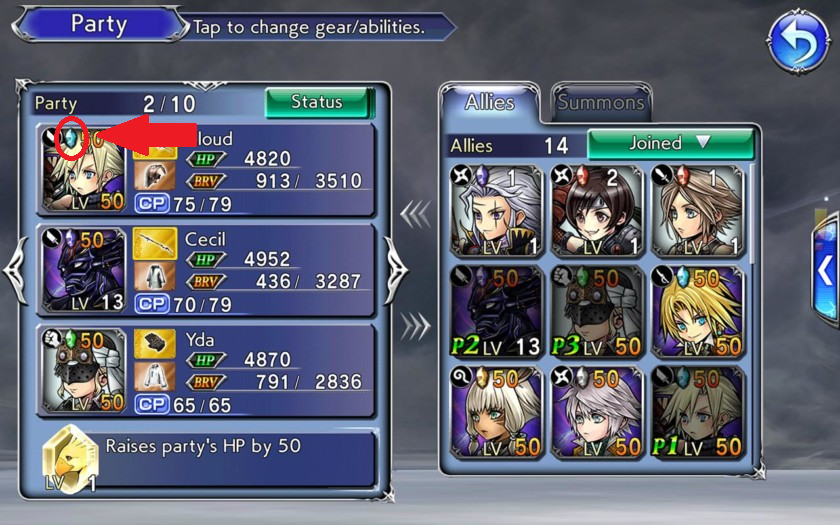 That’s a character’s awakening crystal, you earn them through regular story and dungeon progression and you use them to increase a character’s stats and earn passive abilities. 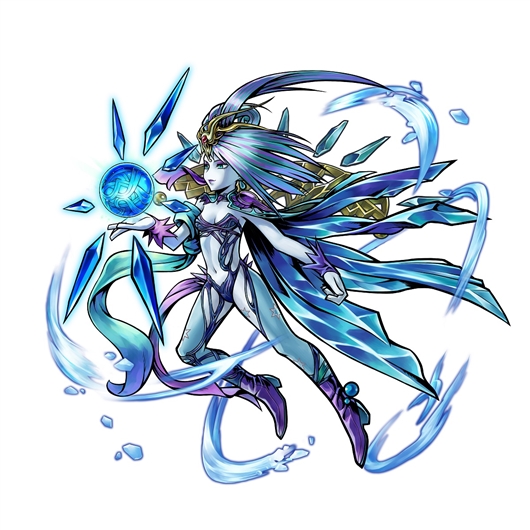 No Final Fantasy game, mobile or otherwise, is complete without summons. In Opera Omnia, you unlock summons through acquiring the required materials via dungeon and story progression, and you level them up by feeding them more of the same materials. Summons are a good clutch play, so use them when you need a boost to your BRV or HP.

It’s impossible to cover everything you need to know about Dissidia Final Fantasy Opera Omnia in one article. So, if you have a question you don’t see covered, or want to know more about the characters from the Final Fantasy games you didn’t play, check out our handy wiki for more information.

Scrounge, Build, and Defend with Friends in Metal Gear Survive

Everything You Need to Know About Slay the Spire, Steam's Latest Indie Hit