Fortnite Battle Royale has a bit of a mystery on its hands.

For the last few weeks, players have been confronted with an icy, gleaming ball of light that suddenly appeared over the Tilted Towers zone. It's a comet, and it's getting closer each day. No one knows exactly what purpose it serves, or what's going to ultimately come of the anomaly.

The race to decipher what the gleaming comet in the sky could mean for the future of the game is on, and fans are racking up their own discoveries and theories to go with them. It's a riddle that practically begs to be solved, especially when Epic Games has been teasing players with important tidbits that all seem to lead to one conclusion: Tilted Towers will likely cease to exist in the future. But to what end? What, exactly, do players think is going to happen to the area in the coming days? 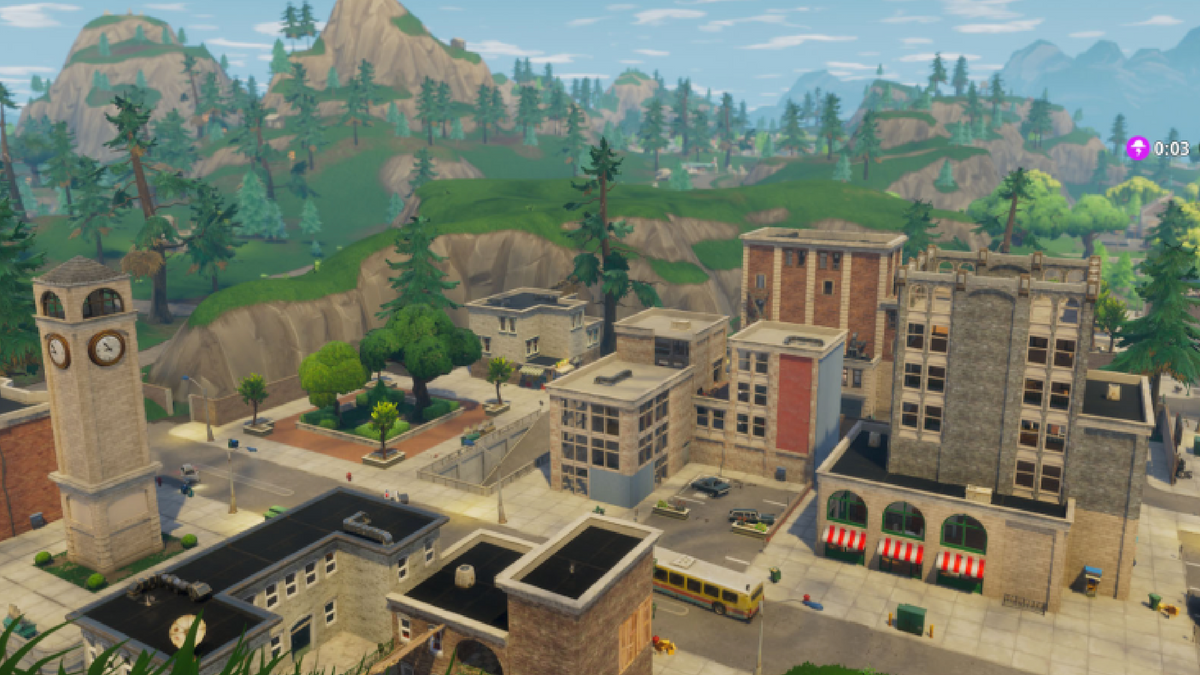 Originally, Tilted Towers was added back in January as part of Fortnite Battle Royale's long-awaited map overhaul, and it kicked up quite a bit of a dust storm as it replaced a once-verdant field. Essentially comprised of a few clusters of several-story buildings, it's a mecca of cramped rooms and chaos. Some players are irresistibly drawn to the Towers. Others find them a pox on the game entirely. As Fortnite player ChlorophyteFTW explained in an official Epic Games forum post, a good portion of players, in fact, "hate" it.

"It removes the flow of the game, it's the location in the center," ChlorophyteFTW explained, which certainly rings true. Everyone wants to scramble to the highest points on the map and snipe away, though the more likely event that usually happens is you're sniped first. Like it or not, players are drawn to this area like moths to a flame, which is likely what spurred this comet-based event into action in the first place — that, or Epic is just looking to shake things up in an interesting fashion. Here's what fans think could happen in the next few weeks.

Tilted Towers could simply be nuked from the map entirely

One fan theory posits that the area will simply be nuked from existence on a certain date. When console players approach the comet and keep it in their line of sight, they notice that their controllers have begun rumbling. Clever players, such as redditor vigilancefoetracer, worked out that the vibrations are in fact a form of Morse code, spelling out "SOS D 5 418." "SOS" is obviously a distress call, where "D5 418" corresponds to Tilted Tower's location on the map in terms of grid positioning. As far as the "418," that appears to correspond to a date: April 18, 2018.

There's currently a bug that causing controllers to randomly vibrate. We're working towards a fix on that but in the meantime, you can turn off vibrations in the options.

Epic Games hasn't publicly commented on this distress call, but did respond to a tweet from a player asking why their controller was vibrating, blaming it all on a bug that "causes controllers to randomly vibrate." If the vibrations do in fact correspond to Morse code, then it seems someone in the Tilted Towers area knows the comet spells certain doom for the location.

If the comet collides with the area, it will likely wipe Tilted Towers clean off of the map, and this seems to be the most prevalent theory at present.

The comet is heralding a new extinction-themed season change 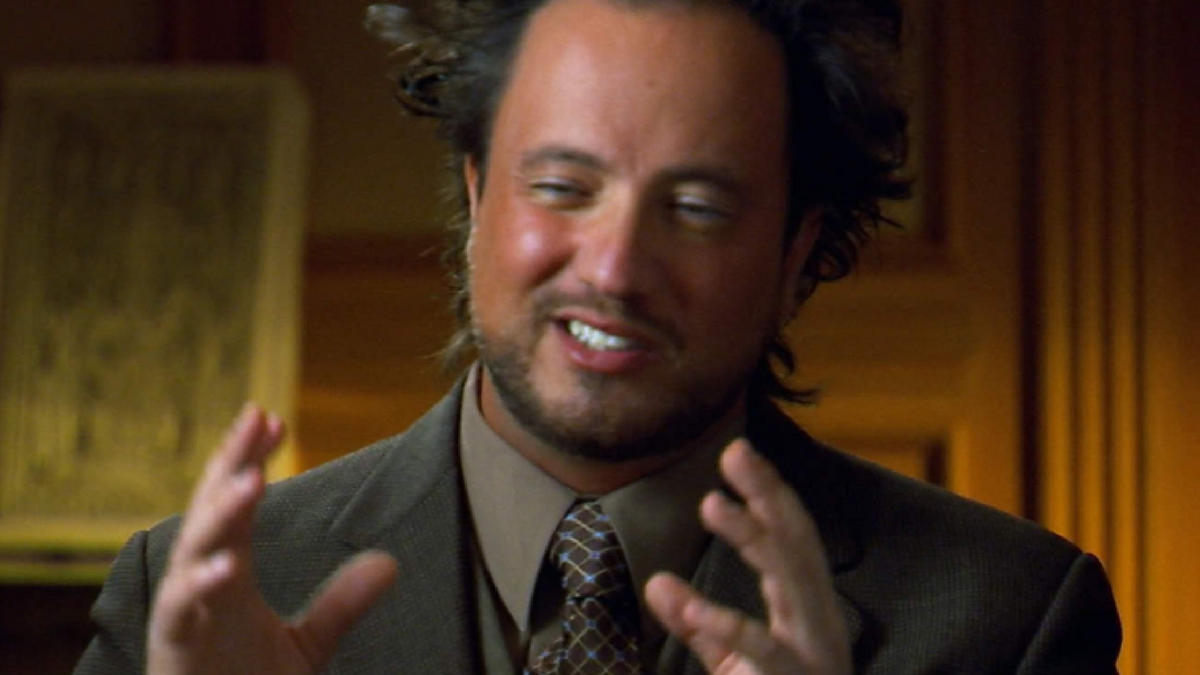 It's certainly not much of a stretch to say that this comet could simply be an aesthetic nod to a set of dinosaur-themed content to the upcoming Battle Pass season. There's some evidence pointing to "aliens," too, as Kotaku received an image of "the alien guy" after reaching out to Epic Games for some answers about the comet. The image could simply be a riff on the theorizing fans are doing right now, considering the wild things swirling around online, or the comet could mean some sort of "extinction" event is coming down the line.

Redditor aleccc15 states their friend came up with the idea that Fortnite's map can be perfectly overlaid with a map of Poland, specifically as Tim Sweeney ended up partnering with the Polish sector of Epic Games located in a town called Poznań. If you look at a map of Poland, Tilted Towers' location can be found right where the Morasko Meteorite Reserve is located. With the Lyrid Meteor Shower coming every year between April 16 through April 25, it's possible that the date decrypted via Morse code could be referring to this meteor shower, and the "comet" could be a part of it.

The comet is a throwback to an old Epic Games title

@Ninja I actually found an Easter egg about tilted towers in an old epic games game its called zzt,also love your vids pic.twitter.com/PszqUcCPOu

This is one of the crazier theories out there, but it seems to hold some water. This theory assumes some knowledge of an old Epic Games title called ZZT, which the founder of Epic Games, Tim Sweeney, created. There's one scene in the game where, shockingly, a meteor hits a city without any further explanation later on in the game. Players believe that Fortnite Battle Royale's comet could be a reference to this older title, but there isn't any rhyme or reason as to why the company could be throwing it back so far, all the way back to 1991.

No matter which school of thought you subscribe to, the future of Fortnite Battle Royale's map is certainly called into question. Though it seems a little counter-productive to completely decimate an area that's only been in the game for a few months, steamrolling a controversial zone is exactly the kind of development style that keeps people interested. Previously, Epic stated in an interview with Glixel that the team was interested in making the "best" version of the map, with a plan to "look at it and see where it goes" from there. This language infers that change is not only possible, but expected.

The existence of the comet and the theories surrounding it could mean that there won't be another new map for Fortnite Battle Royale in the future. After spending time and energy redesigning the original, and maintaining the mentality seen in the Glixel interview, this entire event is likely paving the way for a new area entirely, left in the wake of the comet's destruction. Out of all the areas in-game that could be obliterated, Tilted Towers simply makes the most sense. But it's entirely possible that the comet is simply a red herring, and a nod to a potential change on the map's surface. It could simply do no damage but instead herald in a series of new changes to bring on when Season 4 begins instead.

Whatever does happen, one thing's for sure: Epic certainly knows how to keep us in suspense, without having to really do anything at all.

Whether Tilted Towers is reduced to a crater in the coming weeks or not, there's still plenty of fun to be had within the game, so make sure you check out our official Fortnite wiki for tips and tricks on how to make the best of your time in Tilted Towers while it's still there!