Very big things have happened in Fortnite recently, turning the game on its ear and reinvigorating the moment to moment gameplay. It seems that a barrage of space rocks hit the island, tearing it up and revealing the remnants of superheroes who lived among the denizens. It's a pretty big shame that none of them are around, because the barrage brought one other thing: The Mad Titan, Thanos.

Yes, THAT Thanos. Thanks to a miraculous cross over by Epic and Disney, a limited time mode called The Infinity Gauntlet has come to Fortnite: Battle Royale. The titular gauntlet falls from the sky and the first person to pick it up transforms into Thanos himself. With it comes new powers and a truck load of durability, turning you into a real boss-level character for the rest of the island to sort out.

Here are some tips for conquering this new mode. 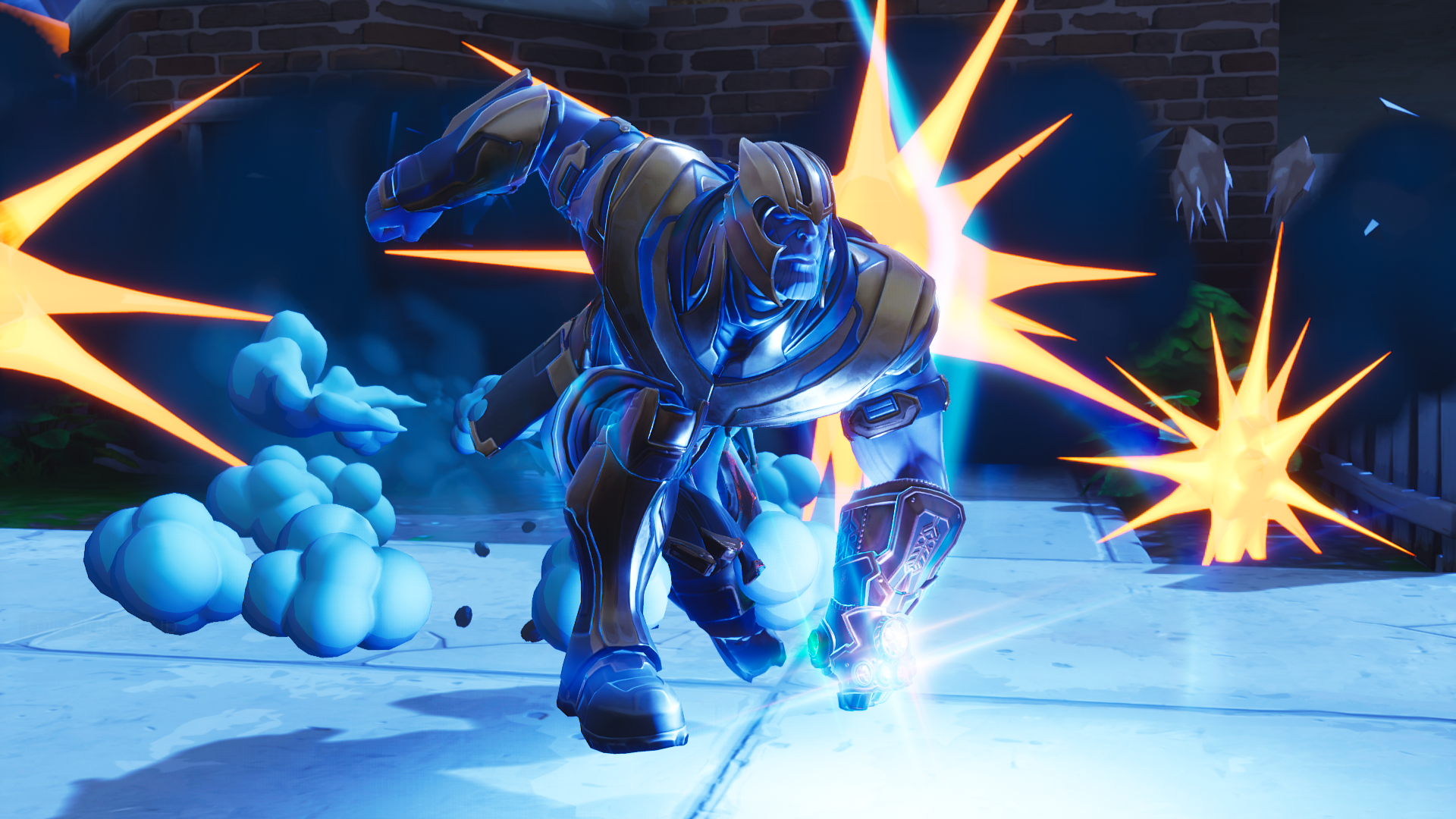 Look, I know your favorite streamer wrecked the Mad Titan 1v1, but the chances of you going toe to toe with someone who has multiple times the shields and health of you, plus a ranged weapon with unlimited ammo, plus a one-hit kill melee attack, plus a super jump that can move him around the map quickly, is incredibly slim.

I know this sounds an awful lot like consorting with the enemy, but the best way to take down Thanos is when several guns are trained on him at once. Chances are, if you look to the sky, you’ll see him scoping out his next target. If someone starts firing back, use this to your advantage and lay into him yourself. The map is just a little safer when Thanos isn’t there, even if he was nerfed dramatically just 24 hours after the mode launched.

How can someone with all those things I just mentioned not be the biggest threat on the map? Because normal bullets, bombs, and traps still kill just as easily as the always have. With everyone getting distracted trying to secure the Gauntlet, there’s a whole map full of people acting unusually reckless in the hunt for glory.

Smart players will be waiting in the wings for people who start outright sprinting for the drop zone of the Gauntlet without clearing buildings or staying behind cover. They are easy targets. Don’t be that guy.

Outside of Thanos’ presence, this is basically Fortnite Blitz, meaning the circles are smaller and the storm moves faster. That means conflict is going to be forced on you sooner rather than later. It also means that the chances of you actually grabbing the gauntlet and becoming a god are slim, as everyone will be moving far more aggressively. Play against the normal players first, the Purple People Eater second. 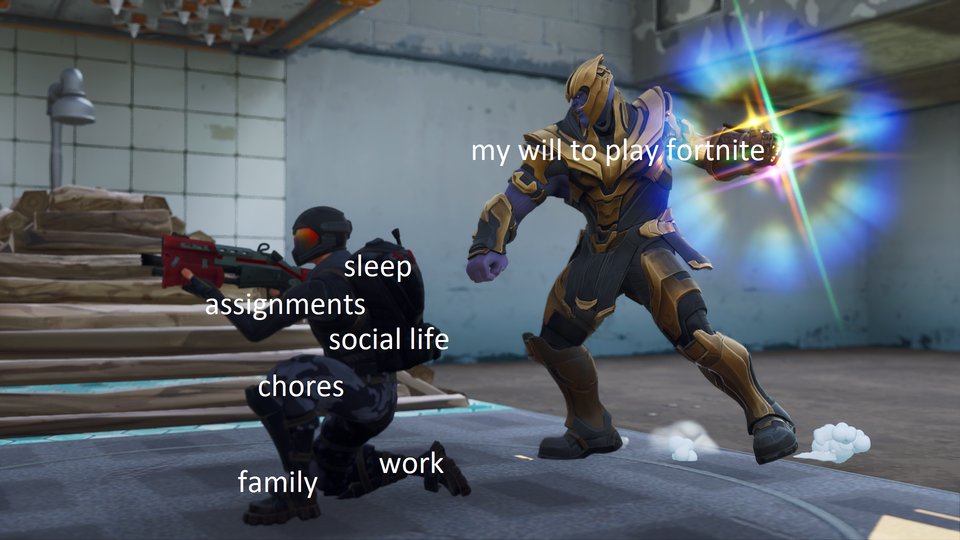 But if you REALLY want to try to get the Gauntlet...

..there’s some things to think about that might get you in the best position to do so.

Firstly, maybe don’t hit the ground as fast as possible. The Infinity Gauntlet will always land inside the safe zone circle, and always around minute two, so it you can linger in the air as long as possible before the icon shows up on the map, you can drop yourself right on top of it.

It’s important to try to make a break for the stones early, because it becomes difficult to get the Gauntlet as it hot potatoes from dead body to dead body during the course of the game. There’s almost always a bloodbath following a tandem kill of the current Thanos, because people who now know where each other are all sprinting to be the next anointed. 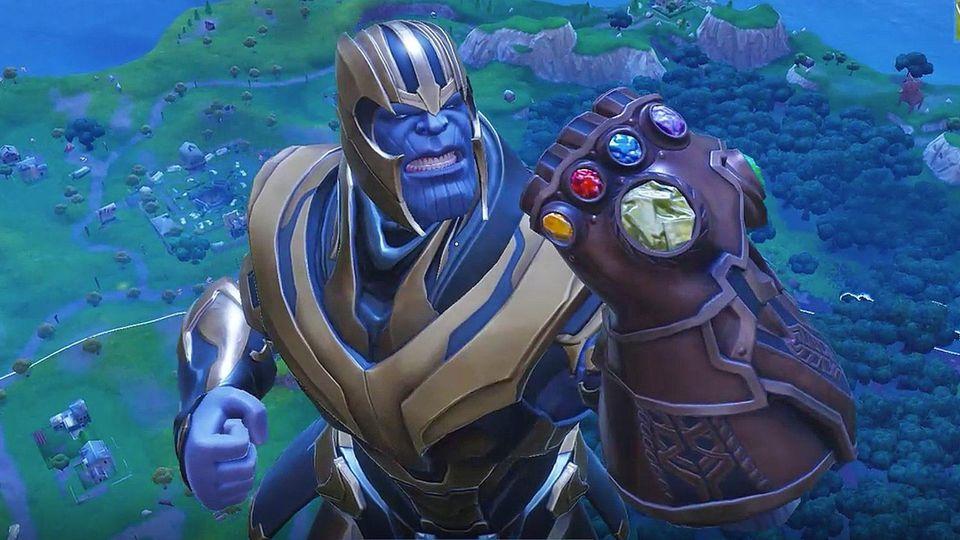 If You Become the God

Welcome to being all-powerful. Just remember, you are not invulnerable (though you might feel that way when your shield refills back to full after eliminating another player). You still need to pick your shots carefully and focus on one person at a time.

That said, strafing and bunny hopping is for mere mortals. Your Power Beam alone can drop a player in seconds and tear through wooden and brick walls like paper, as can your dash punch. Don’t get yourself kited into running through multiple structures to slow you down. You can just jump into the air to get a better perspective and rain down beams from the sky.

Do try to put some cover between you and anyone you can’t directly see, though. Getting hit by potshots from people hiding in bushes or towers is going to wear you down. And if you really need to withdrawn, remember that you have Hulk-like leaping abilities. Use them.

This awesome Fortnite: Battle Royale crossover with Avengers: Infinity War is only available for a limited time, so get in there and get busy! If you need more information, come to our Fortnite Wiki!