Treacherous waters are afoot in pirate simulator Sea of Thieves, the Xbox One exclusive from Rare that still has everyone talking. The game's first free content update, The Hungering Deep, features a huge swath of new cosmetics to suit up with, riddles to solve, and monsters to be wary of. One of those terrifying denizens of the deep is the Megalodon, and slaughtering the vicious beast is no simple task — but with a great crew, teamwork, and plenty of resources you can reel it in without too much trouble. Remember: You're a pirate, and you've got this!

Finding and defeating the Megalodon is all part of a special timed event that's only going on for two weeks, ending on June 12. You'll want to make sure you take part, as there's a cache of goodies up for grabs as a reward. You'll find everything you need to know about locating the Megalodon and killing it off right here!

How to Start The Hungering Deep Quest 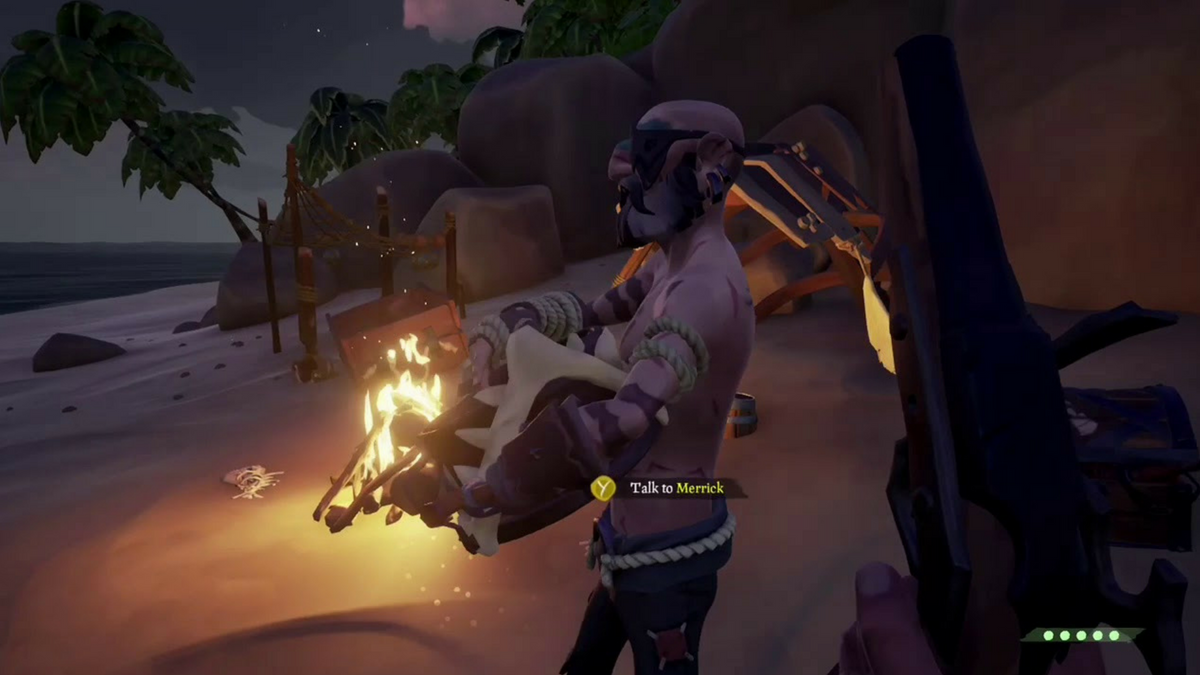 To start your adventure, you first need to head to Shark Bait Cove and have a chat with Merrick. When you find him on the southwest beach of the island (you can't miss him – he's missing both his legs), speak with him and ask "How did you lose your legs, Merrick?" to trigger The Hungering Deep quest. He'll ask you to find his journals, and you'll have to head out to grab them.

How to Complete The Hungering Deep Quest 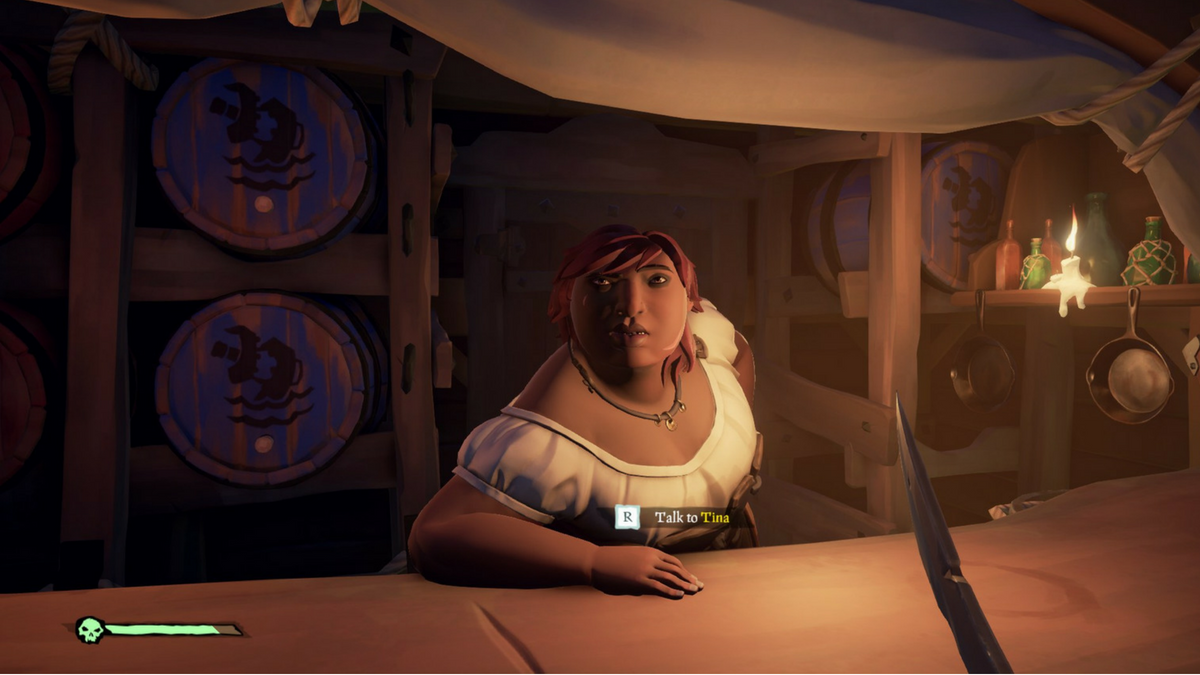 From there, head to the center of Shark Bait Cove and look out for a "fin-shaped rock." It kind of looks like a shark, and you can find the first journal there. Head over to the bridge and you'll find the journal, denoted with an "XX." Read the journal for your next clue.

You'll learn that Merrick had been playing his drum alongside his pirate friends to summon the Megalodon, and that's what you need to do. He's marked down exactly where you need to go on his map, and you'll need to head there eventually. But first, the journal recalls how he went to his favorite bar, The Captain's Head, at the Golden Sands Outpost. Set sail for the Outpost.

When you reach the tavern at the Golden Sands Outpost, speak with the barmaid Tina, and select the dialogue option “Have you had any especially drunken pirates in lately?” – that will trigger the next direction you need to go in. Tina will tell you to head north of Fool's Lagoon and east of Twin Groves at L14 on the map. You'll find Merrick's second journal here.

Once you get to L14, you'll find an island that's not on your map. Scramble out of your ship and head up the crow's nest you find here to grab Merrick's journal, this time with a "V" on the cover. You'll see a barmaid named Terri mentioned, who waits for you at The Snake Pit tavern at Dagger Tooth Outpost. Head there next.

When you get to Dagger Tooth Outpost, chat with Terri and ask her the same question about "drunken pirates." She'll tell you to head west of Shark Tooth Key and look for an island that can be found at S16.

Once you get there, you'll find a small island with a cave that's hidden underwater. If you look around the island and take a dip in the water, you'll find an area that leads into a tunnel and up to another area where you can get out and dry off. There's a statue here made out of rocks, with the last journal of Merrick's that you need to find. This one has "I" emblazoned on the cover.

Once you've found all the journals, head back to Shark Bait Cove to speak with Merrick once more. You'll be rewarded with the special tattoos and drums that you must use to summon the Megalodon. Now it's time to get down to brass tacks and nail this thing once and for all!

How to Find the Megalodon 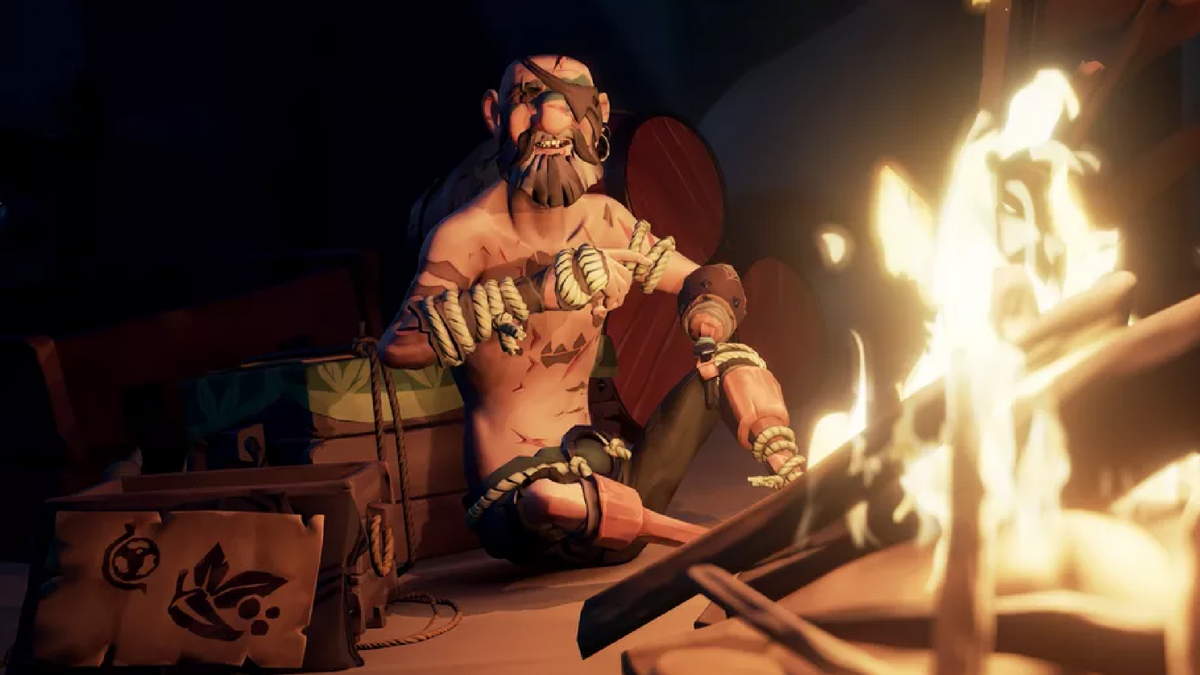 After you've completed the quest that's actually called The Hungering Deep, referenced above, you'll be rewarded with a special tattoo and a drum that's absolutely essential to summoning the Megalodon. Make sure you've done all that, provided by the character Merrick, before you set out on this dangerous mission.

Once you've done that, you'll want to make sure your ship is stocked up with everything you need to make this fight a total breeze — or at least as close to a breeze as humanly possible. You'll need lots of cannonballs, bananas, and planks, and a crew you can communicate well with. We recommend rounding up your most formidable friends for this haul, because it's going to be a doozy.

With your ship fully stocked and your crew at the ready, sail to Merrick and play his tune, a tune you'll have to keep going as you journey to coordinates T26, where you'll start up the Megalodon battle. You'll need five players to summon the creature, and all players should be wearing Merrick's tattoos and playing the drum at the same time when you get there. You should notice that your tattoos will start glowing as you summon the nasty shark.

How to Kill the Megalodon 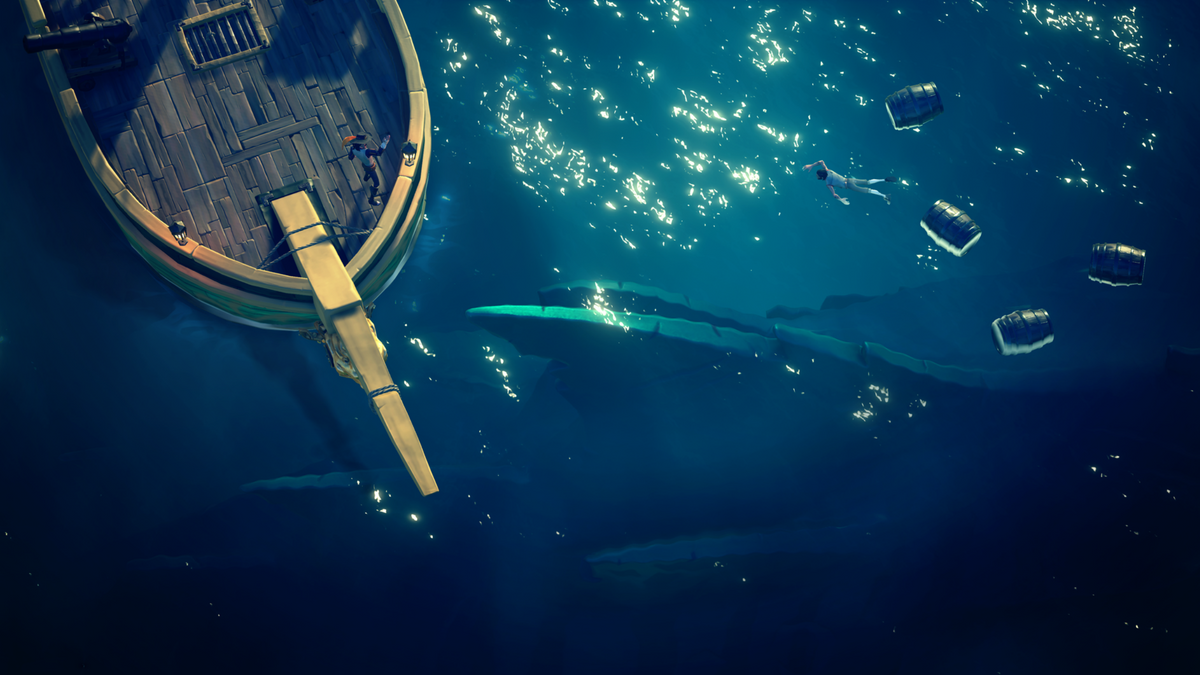 You will find the Megalodon at T26 near the Devil's Ridge, so when you get there make sure you're at the ready and well aware of your surroundings. This shark is more than just a formidable enemy, it's also quick and hungry. You may not even be able to see the beast at first, but fortunately there are plenty of musical cues that begin when the Megalodon is about to make its move. It will first circle around your ship, then attack the ship that has been causing the most damage. If you happen to be there with other pirates, this can be used to your advantage.

When the music begins and you see the Megalodon begin to circle around your ship, grab your Eye of Reach or a Flintlock pistol and start peppering it with shots. If you see it coming close to one side of the ship, fire cannons straight ahead at the shark to do some real damage. You need to be careful here, because it will be coming straight for you, jaws wide, ready to take a chunk out of your tasty body. When it opens its mouth, assail it with cannonballs for the best effect.

Make sure you have other folks on the ship working to bail the water that any potential damage to the hull will let in, and patching up holes as the Megalodon attacks. Don't just throw cannonballs out into the water willy-nilly, as it can be difficult to land a hit when you can't actually see the shark with its mouth open. Wait until it pops up out of the water ready to take a bite, and shoot at it then to maximize how much damage you're doing without doing any damage to other ships. Also, keep an eye out for the red water (ie the edge of the world), as you won't want to enter it during the fight.

Continue shooting at the Megalodon either with your pistol or sniper rifle, firing cannonball shots when appropriate, until you've damaged the shark enough that you can contribute to patching efforts. Eventually, it will die, and the game will make sure you're aware with lighthearted, happy music and a dead behemoth floating in the water. When you're done, return to Merrick for some awesome goodies, and pat yourself on the back. You just killed off Sea of Thieves' terror of the deep!

Even though you've eradicated the Megalodon, pirate legend status might still await you, and there's always more treasure out on the high seas! Check out our Sea of Thieves Wiki for tips on how to become the very best pirate you can be. 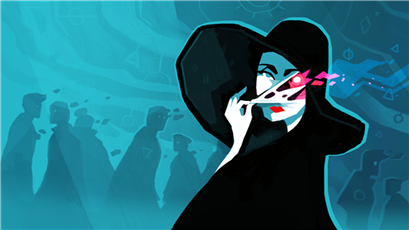 Become a Seeker Who Unlocks Lovecraftian Mysteries in Cultist Simulator