Being a cultist is hard work. Summoning eldritch abominations and the old gods really takes it out of you and getting started can be a pain. But that’s why we’re here to help guide you through Weather Factory's Cultist Simulator, an intriguing, fast-moving card games that requires skill, plenty of thought, and a good deal of patience. You’ll absolutely need it if you want to make any headway in this peculiar title, especially with its various requirements, card types, and fast-moving rounds that don't lift a finger to help you make sense of things.

Luckily, with these tips and tricks for beginners, you'll be on your way to becoming a model cultist in no time. These tidbits are meant to help you get on track and move beyond any frustrating paths you may have ran into with little knowledge of the game. Read on, aspiring cultist. And good luck. 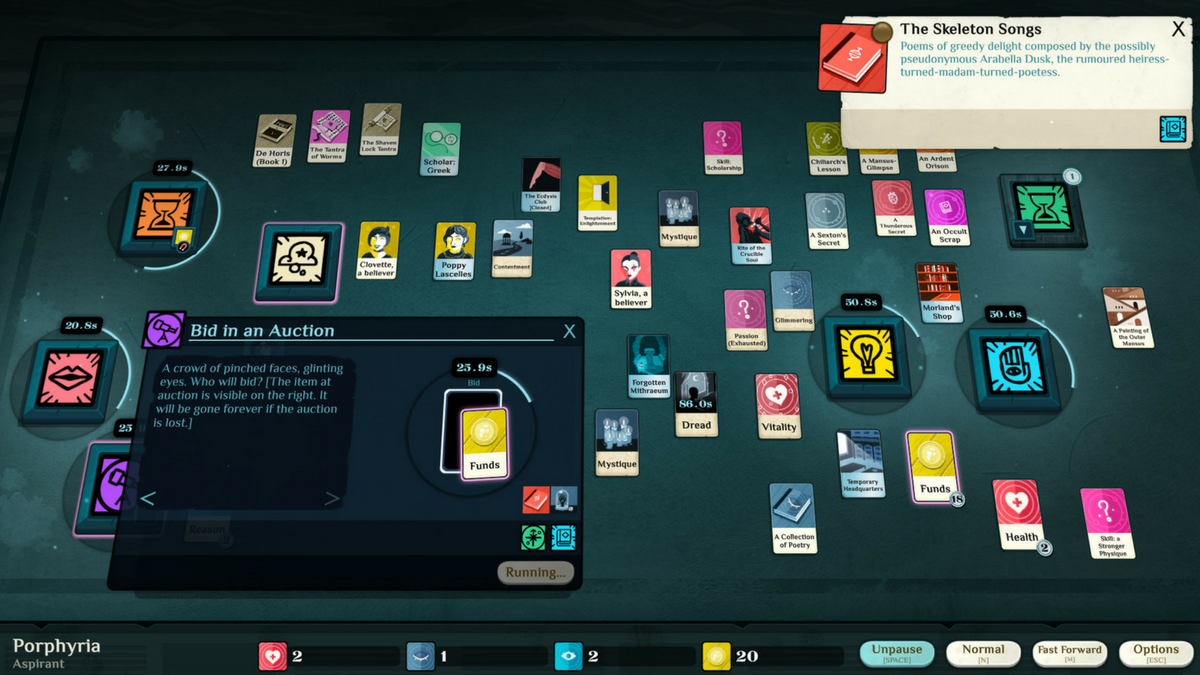 Cultist Simulator has its own special language that you'll want to learn as quickly as possible when getting started. When you click on a card, look at the bottom right of it to see things called Aspects or Actions. These are important because it's how you'll figure out what to do with specific cards. Similarly, the tokens on the game board are called Verbs. The cards that you see that sometimes appear on the board are known as Seasons, which are actually random events that happen due to Time Passing. Other random Verb cards are called Inductions and they are denoted by icons like hearts, moths, lanterns, etc. Memorize this information and keep it in mind as you play, and things will start to better fit together. 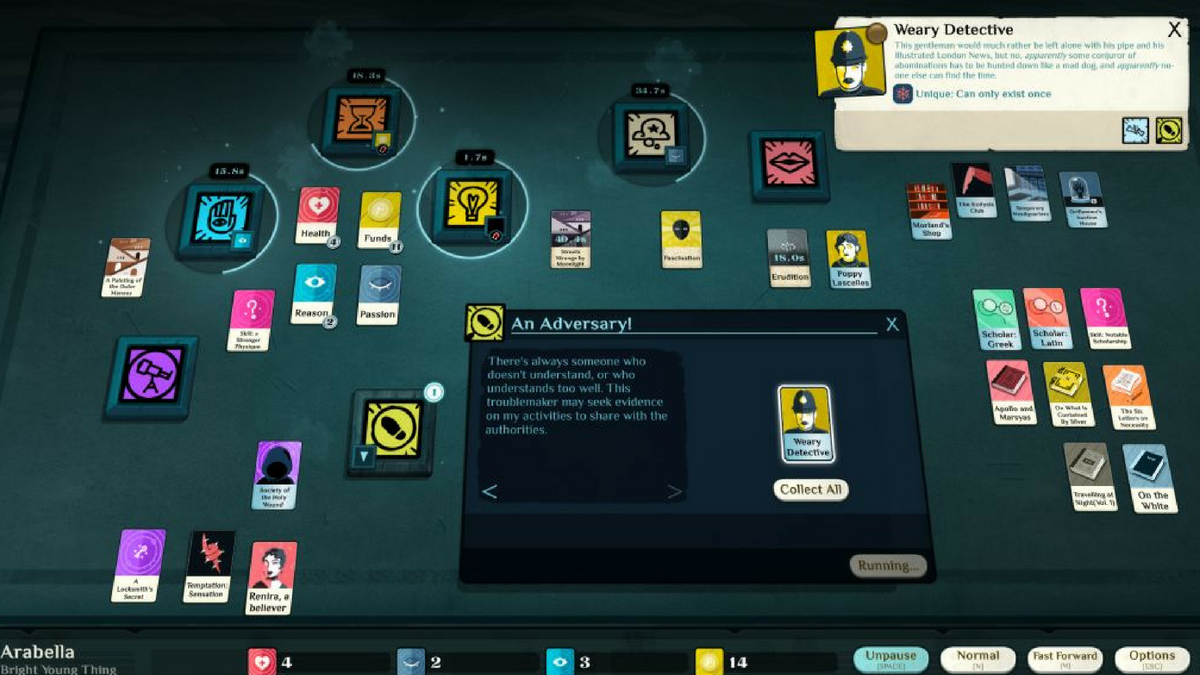 This may be a no-brainer, but when you're just starting out, make sure you read absolutely everything, even if you don't think it's important. Cultist Simulator will not hold your hand with a tutorial or walk you through anything. When you first start the game, you'll only have a few icons to work with. The game will explain what these mean via tooltips, but you won't get anywhere at all if you don't take the time to read and investigate each one. This is a mistake that's easy to make early on as you start dragging and dropping cards to where you think they should go rather than where they really should go.

For one, clicking on a card will give you a description as well as an aspect at the bottom right of the card. You can pause the game for some extra time, and that's absolutely encouraged. You need to learn to understand the various meanings of each card, their Verbs, and what you need to do to make it through without losing Health and Funds, which leads to a swift dead end and game over. Take the time out to learn and educate yourself as you go along, because this is the foundation of becoming a seasoned player, or making it further through the game, period.

Hoard Your Resource Cards and Don't Waste Them 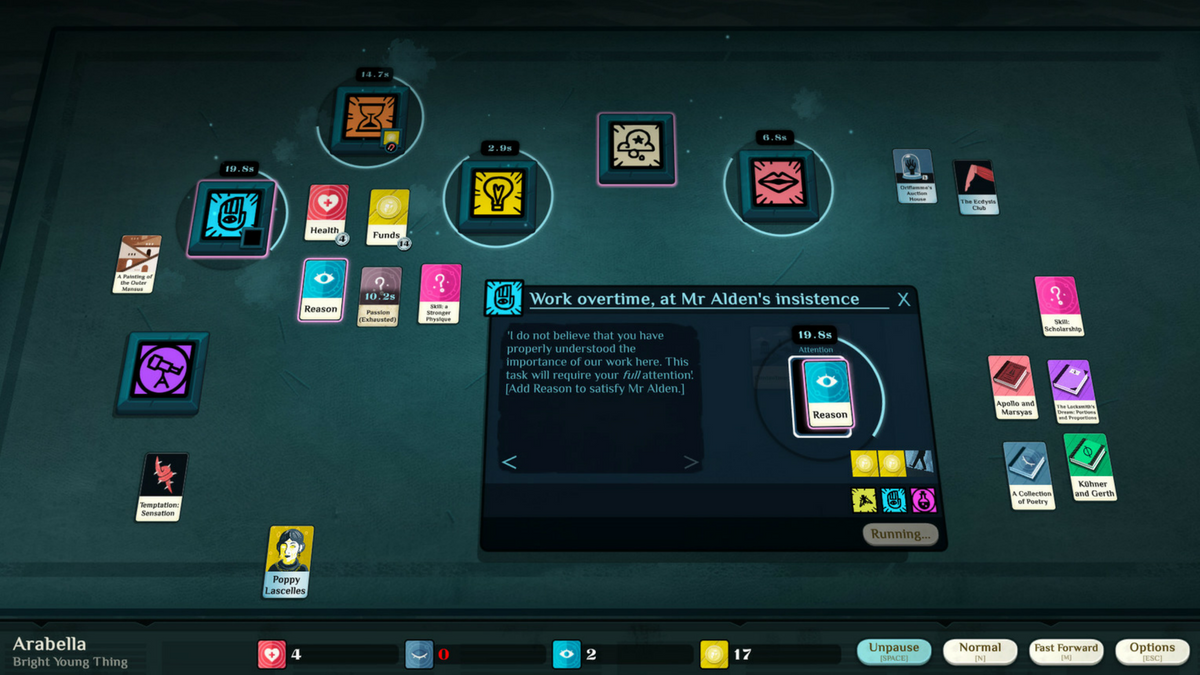 Cultist Simulator offers you important cards that act as Resources. These range from Health to Funds to Reason and everything in between. These are some of the most difficult cards to acquire as you play through the game, and also the most important. If you blink, you can run out of Health and Funds, and you need both to stay alive. With that said, make sure you're hoarding Resources as often as possible. Funds are easy enough to gather if you have a career or job, and Passion is simpler to gain as it seems to pop up more often than the other cards. But Health and Funds are some you'll absolutely have to watch for. Don't waste your Health cards on finding a career, and don't use Funds on Expeditions if you can help it. Hold onto them as long as you can, and utilize them only when necessary, because you may not be able to keep the job you've lucked into for long.

Stave Off Fear, Dread, and Despair 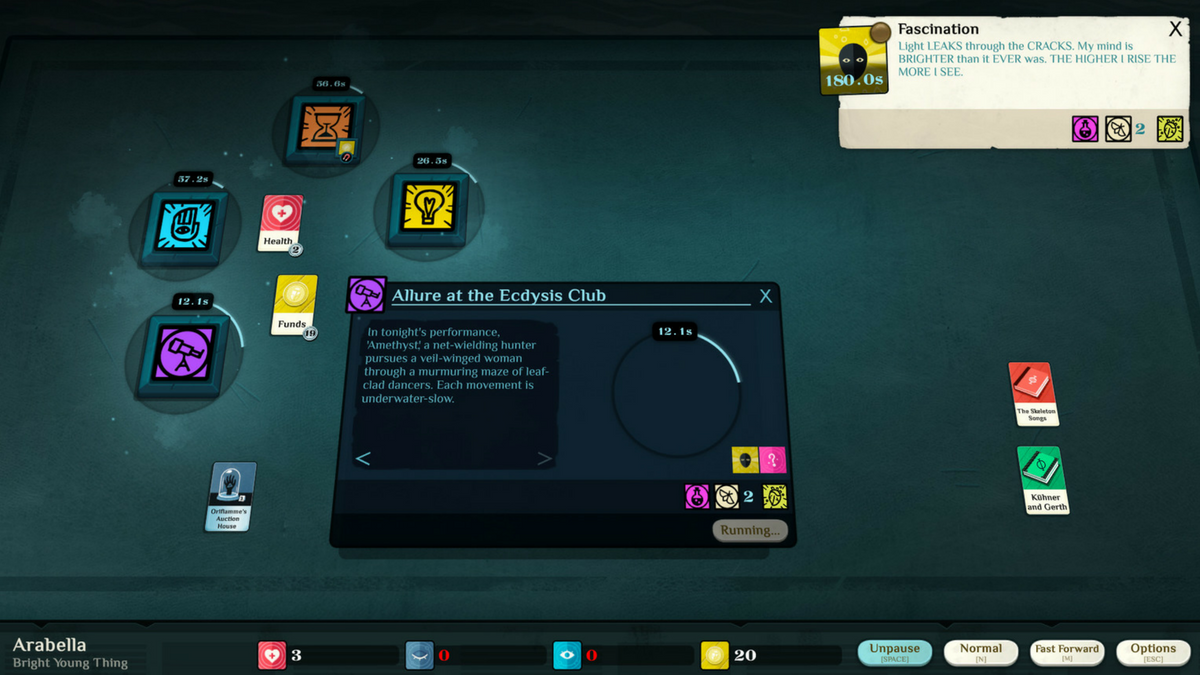 You'll randomly be dealt Fear, Dread, or Despair cards at certain points throughout the game, and they can spell an early end for you. Icons can turn over into one of these afflictions at any moment. Dread can quickly turn into Despair, which will suck down important resource cards at lightning speed, and you'll want to get rid of it as soon as possible. You can fight Dread by taking up Painting as a profession, using Restlessness as a way to get inspired. If you have a Contentment card, similarly, you can use it to Dream and prevent Despair from transpiring. These status effects will very quickly drain you and throw you into an early grave, so work to clear them as quickly as humanly possible. 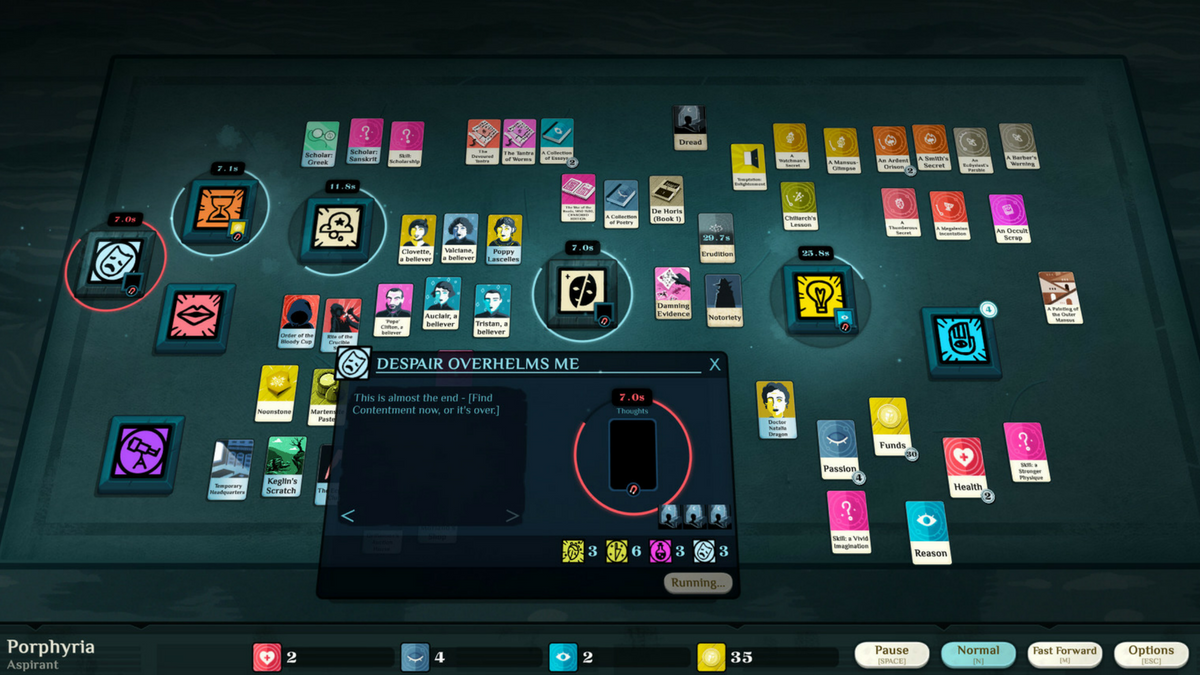 This may seem like a no-brainer, but as you work your way through the game, your play area is going to get a bit cluttered with all the cards you have at your disposal. You can arrange them however you like, so you'll want to sort them out into sections that make sense. Though you can pause the game at any time to read and reflect on what's on the table, dragging cards across the table can cost you precious seconds when your health is being drained or you're waiting on something to complete or expire. If you keep a neat and tidy area you'll remember where important cards are and can thus find them in the heat of the moment, which can help you a great deal in the long run. It's a simple trick, but one that you'd do well to remember.

In search of more ancient mysteries? Curious about a more specific aspect of the game? Check out the Cultist Simulator Wiki!

Grimmwood Impressions: Patience and Persistence vs The Dark Horde

Vampyr Will Take a Bite Out of Your Own Moral Code

Sea of Thieves: How to Fell the Giant Megalodon Shark in The Hungering Deep

Push the Demon Hordes Back into the Warp in Warhammer 40,000 Inquisitor - Martyr