Death's Gambit, White Rabbit's side-scrolling adventure RPG, is jam-packed with things to do and see. Much of it can be confusing, especially in the beginning. There's plenty of things I wish I knew before I started my trip into Sirodan that I learned the hard way. Let this guide save you from the same fate.

Each of the seven classes have unique strengths and weaknesses that will be the crux of how you play through the game. The Solider, Assassin, and Wizard are your basic archetypes, but the rest are almost alternate visions for the role. Besides having different starting gear and weapons, they also tend to have unique abilities. The Sentinel can equip gear at half of the stat requirement, where the Acolyte of Death can rebuild broken save statues. 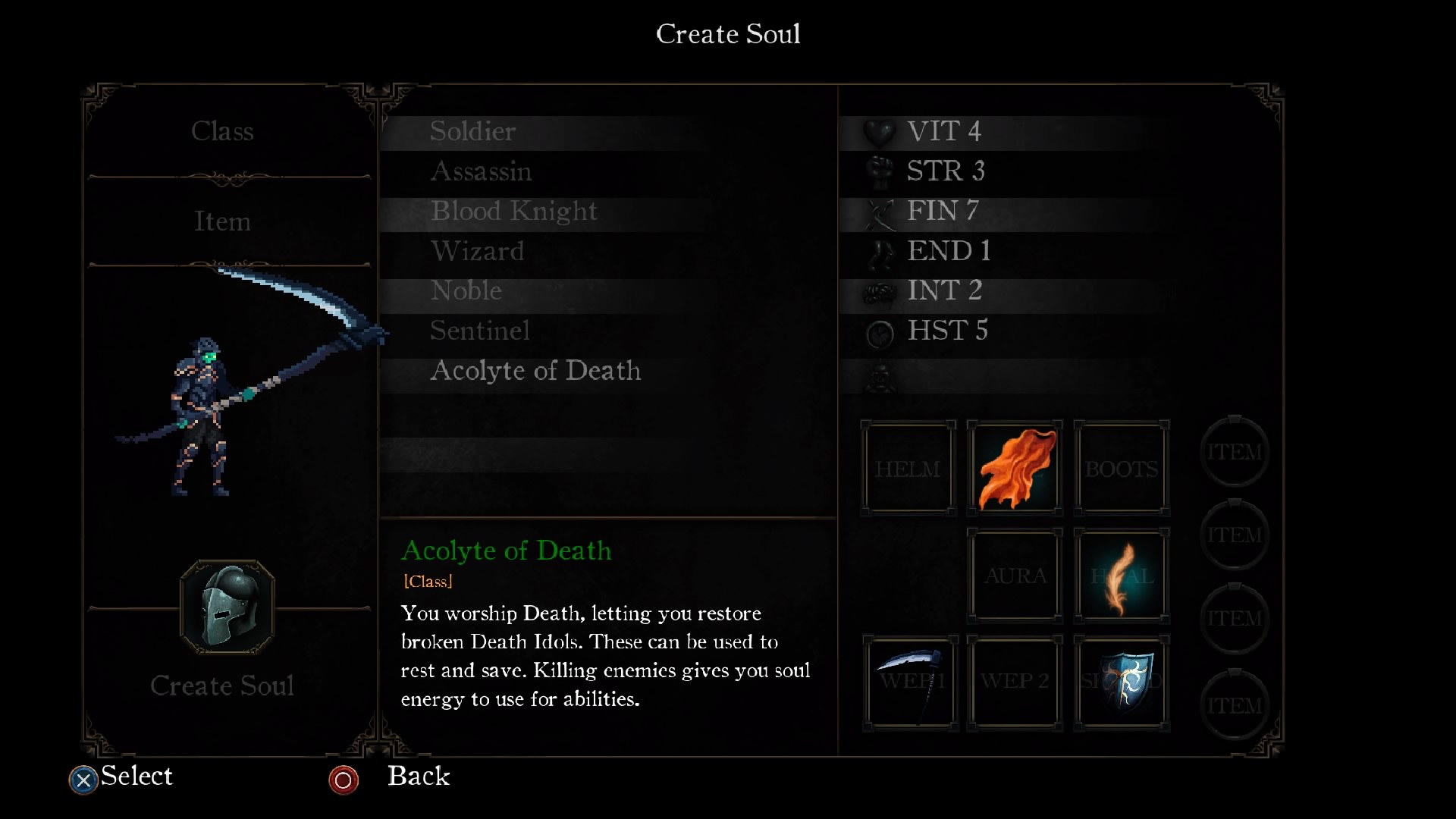 Play Around Your Class's Unique Talent

Every class has a unique way in which they grant you bonus soul energy. Soul energy is used to cast abilities, so it important that you have an abundance of it. For the Blood Knight, that means getting hit by attacks. For the Noble, that means using items. Each is different, and it's important to know which one is yours, so that you know how to play when in a pinch.

You Can Equip Any Weapon, But You Should Still Focus

Weapons are not class-based in Death's Gambit. That said, many weapons require a minimum stat amount before you can equip them. Weapons also scale in effectiveness with either strength or finesse. You don't need to commit to only one type of weapon, but you should probably commit to either strength or finesse as your primary damage stat, which will then give you a group of weapons to hover around. 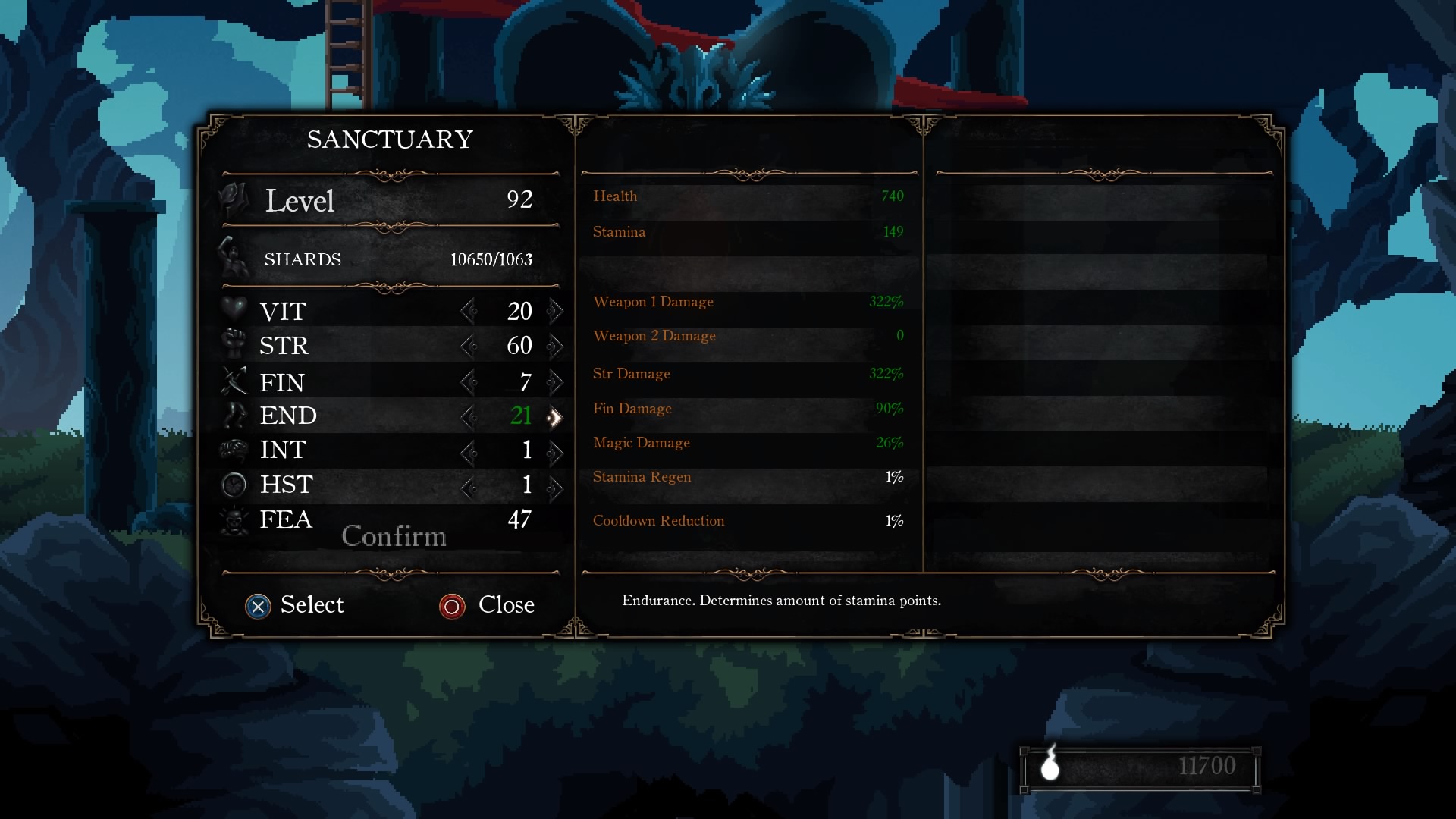 As it's very tempting to just dump shards into increasing your damage stat as quickly as possible, it's important to invest in your stamina as well. With most actions costing so much of it, you'll need a solid pool of it to stay in the game. Also, think about throwing some points in Haste, which will increase you stamina regen, among other things.

You will meet a big handful of NPCs who will have plenty to say to you. When they want to chat you up, it's important to do so. The ones at Sanctuary will have have some items to sell, or some skills to teach you. Both are worth the investment of shards. 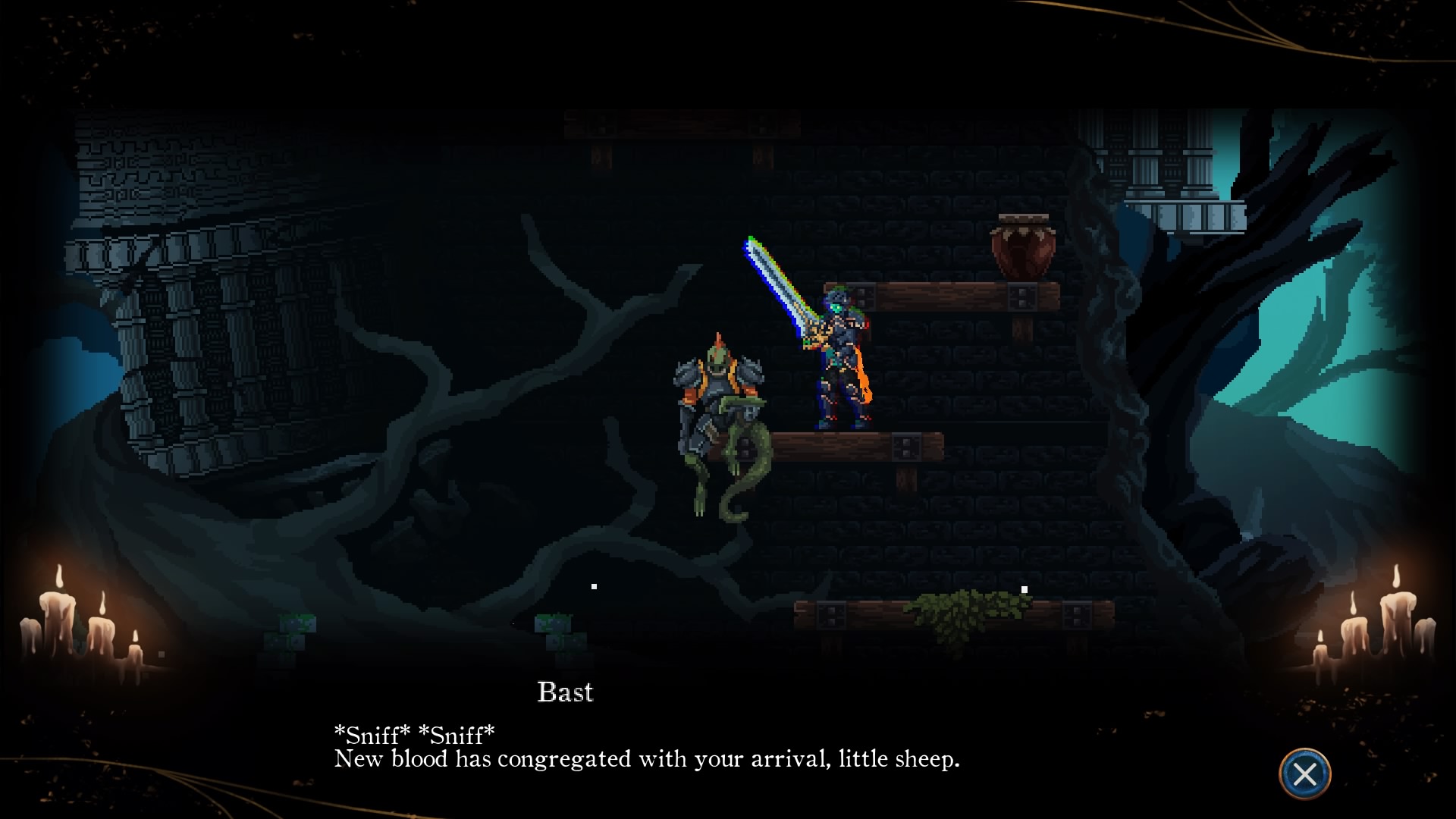 Be Careful Where You Swing Your Weapon

NPCs can be hurt by your weapons, so don't go swinging wildly in places they may be. You don't want to accidentally provoke or kill them.

Not everyone who can sell you something has an item list that can grow or change. Some do though, so it's important to check in with them fairly often. Some even sell important key items that will help you progress to certain locked off portions of the game. 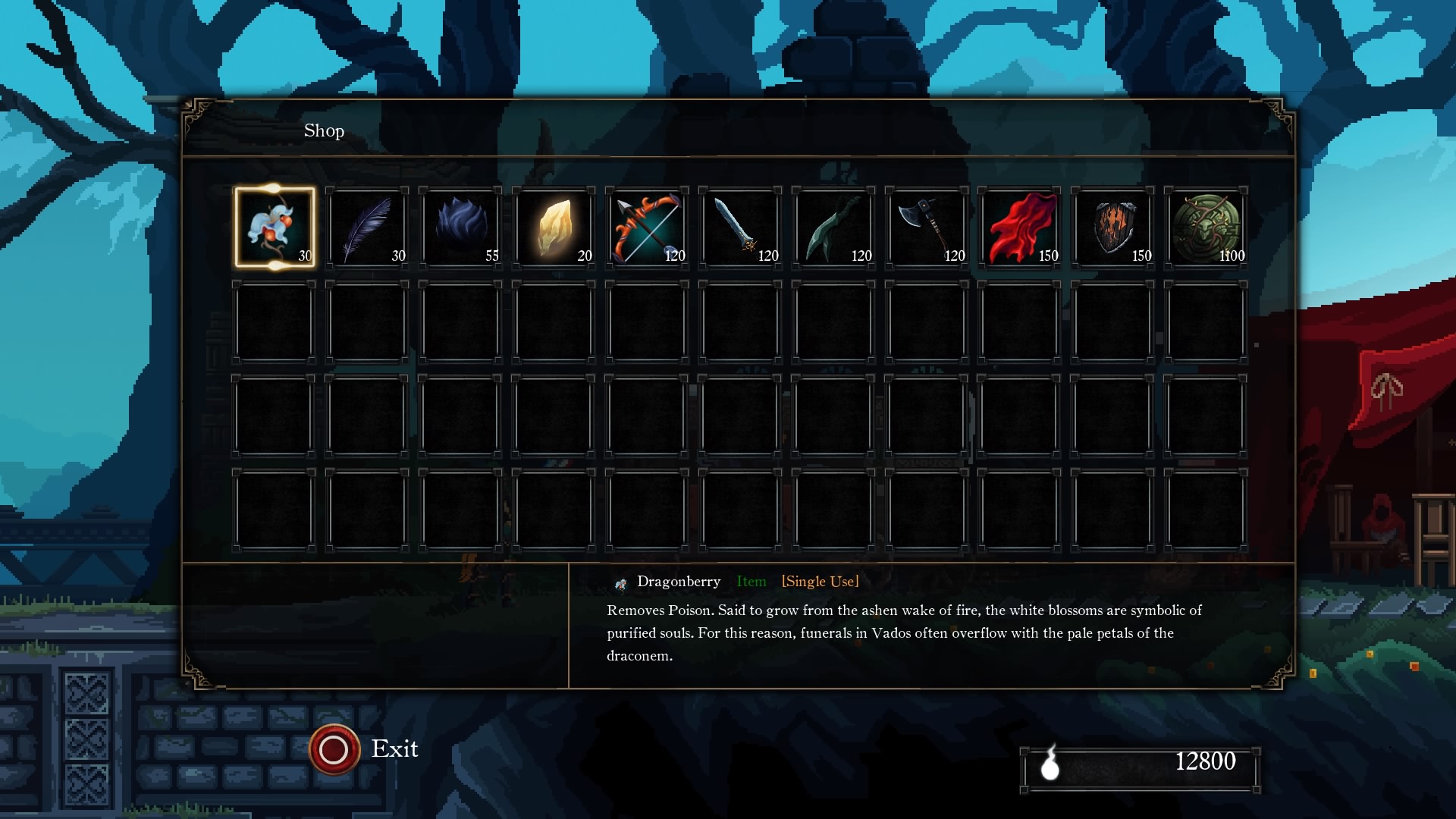 Every enemy in Death's Gambit will kill you if you give it the opportunity. From the lowliest grunt to the most menacing abomination, they all only have one goal: rip your face off. Treat every one of them like they could wreck you.

Ghosts Are Bad, But Easy To Deal With

You'll notice there is a particular monster that just doesn't seem to take damage, no matter what kind of weapon you use. Magic just doesn't seem to cut it, either. Don't fret, because there's a very easy solution to making them vulnerable: Sunstones. They are throwable items that cast a little light where ever you drop them, good for illuminating dark spaces. But if you toss one at a ghost, the ghost will solidify and can be killed by conventional means. Sunstones drop off of random enemies, but can also by bought from Jaco's cart at the Sanctuary for cheap. 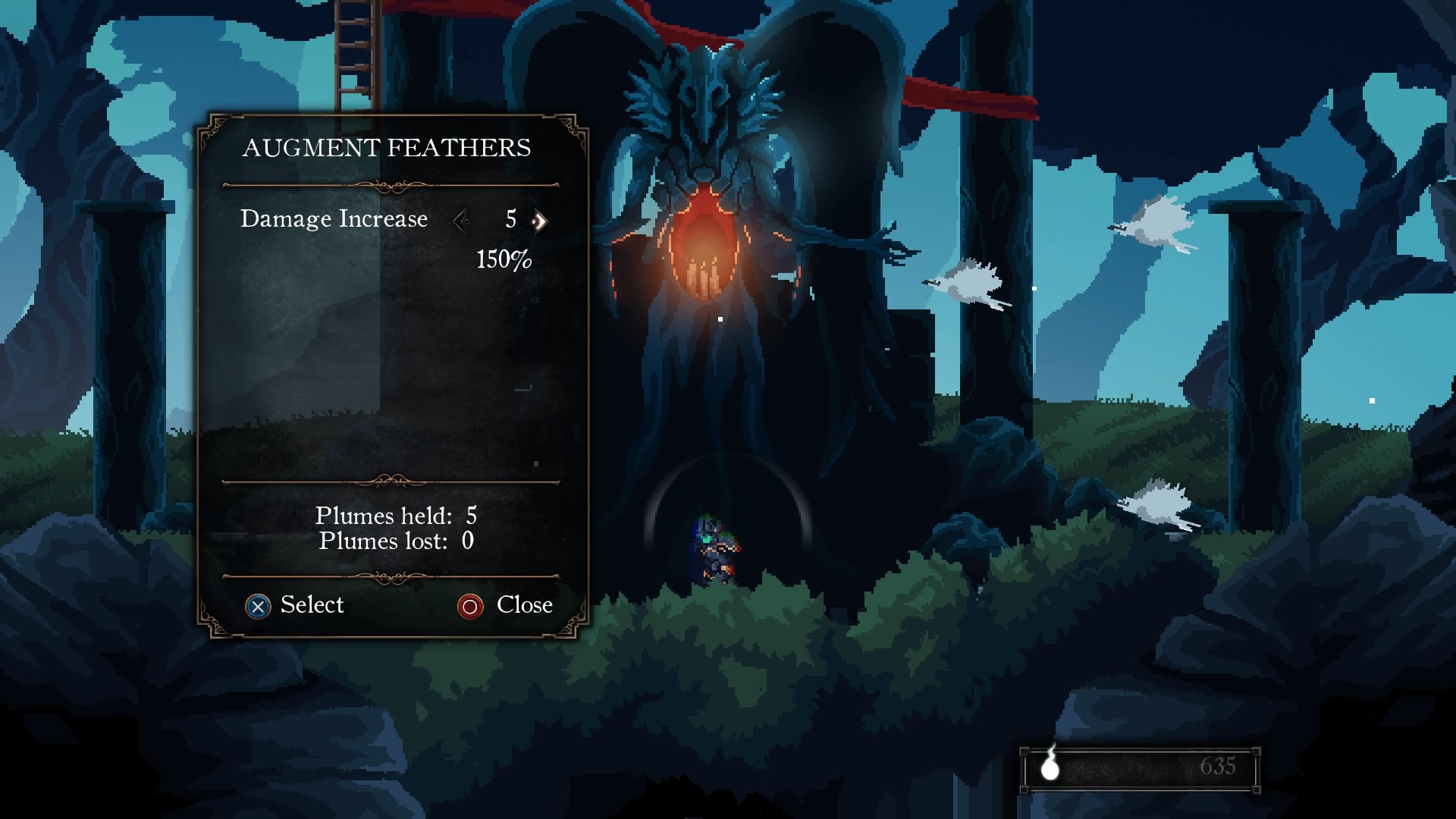 Take Full Advantage Of Your Feathers

Feathers do more than just heal. Some feathers add strength or reduce damage taken by a certain amount. Some feathers heal more or faster. It's important to figure out how new feathers can factor into your rotation to provide some game-changing adjustment.

You can also sacrifice some feathers at Death Idols to give yourself a permanent strength buff so long as they stay sacrificed. This should be taken advantage of to get the most out of your damage output against bosses or tough monsters.

You will come across a lot of useable items in Death's Gambit, and you'll be stiffing yourself if you don't work them into your game plan. Crystal Bombs are a great source of damage against groups of monsters. Abyssal Eyes help you scout the area ahead for threats and secrets. Take advantage of these tools. 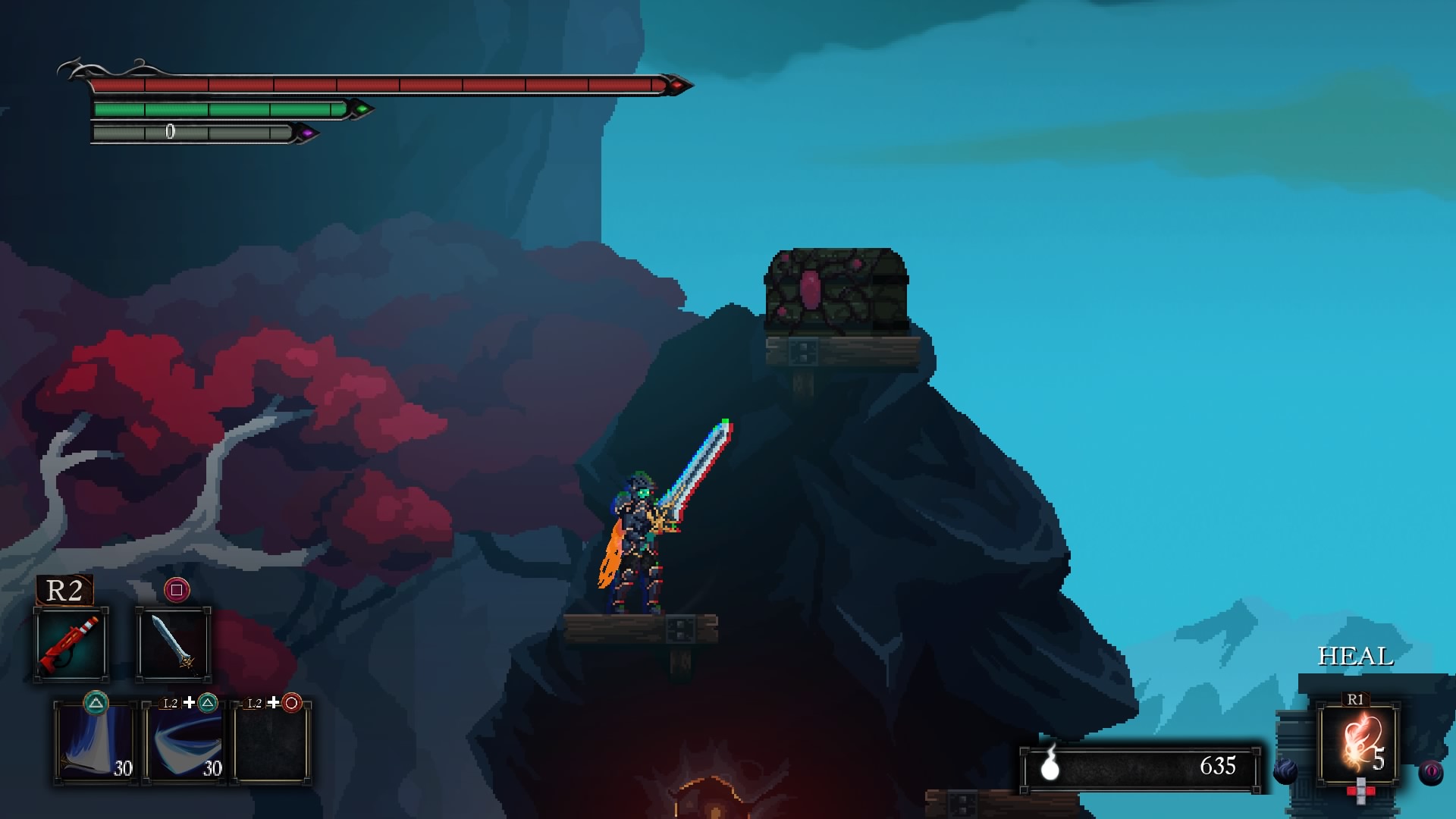 Keep Your Eyes Peeled For Secrets

There are secrets EVERYWHERE in Death's Gambit. Dead ends often give way to mystery hallways. Fancy chests are tucked in corners and require crafty platforming to get to. Always check roads less taken for opportunities to find secrets.

Of course, there's plenty more to know about Death's Gambit, all available at the Official Death's Gambit Wiki! Be sure to drop in for that knowledge, or even drop some of your own!

Metroidvania Madness — Which New Action-Platformer Is Right For You?

Innovate in the Medieval Cemetery Sector with Graveyard Keeper

Defeat the Immortals in Death's Gambit

Gamepedia Editor of the Month - July 2018