Motion Twin's Dead Cells is a technicolor dreamcoat of dungeon-crawling goodness. Procedural map drawing and semi-random equipment pick-ups mean that every single run is different from the last. Zones progress in a predictable fashion, and some types of progress carry over from run to run, meaning you can always work on something. Parsing what to do in a situation like this can be a struggle, but luckily, that's what we at Gamepedia are here for. Let this guide help you keep your head on your shoulders while a dungeon full of baddies tries to use it as a soccer ball.

You never know what odd-looking tile, unassuming door, or weird floor growth might produce some strange result if you interact with it. Sometimes, you just gotta get your hands dirty and grab at stuff until something happens. After a while, this will get old and you'll likely start to pass things by, but on your initial runs, be as handsy as possible. 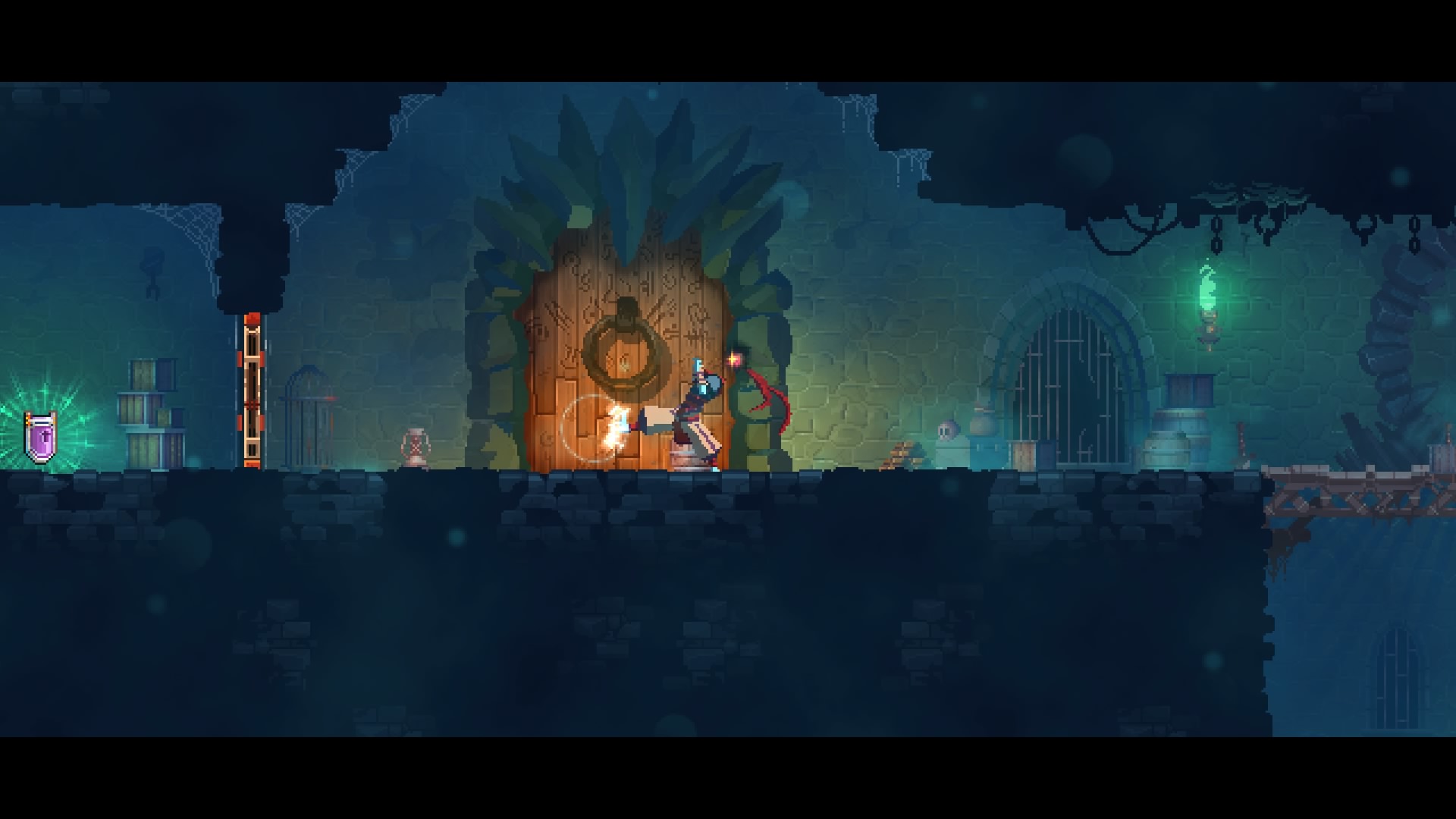 It will become pretty clear to you by the end of the first area that Dead Cells wants you to have all the things. The game is constantly throwing weapons and items at you, and you will be best served by using them at every opportunity. Don't let their cool downs trick you into being too conservative — they're here to help you turn the tide of combat in ways your normal weapons and shields can't. Wolf Trapping a boss is something you'll do once, and then never forget to do again.

So, there is a bit of drama regarding how useful the shield weapon type actually is. Some find it to be something of a hindrance in the hands of anyone who isn't a complete expert, and prefer something more aggressive. The shield does have its merits, though. Simply by having one in your possession, you get a barrier that surrounds you for a moment when you take damage, effectively preventing you from taking more damage for a short period of time. Just straight defending will reduce the damage you take significantly, although you will still take some damage. The only way to prevent the damage completely is to parry: not only will it negate all of the melee attack's damage, but it can also reflect projectiles back to the shooter and negate explosive damage. Parrying can get you farther than you ever could by mashing and rolling alone, if you're up to the challenge. 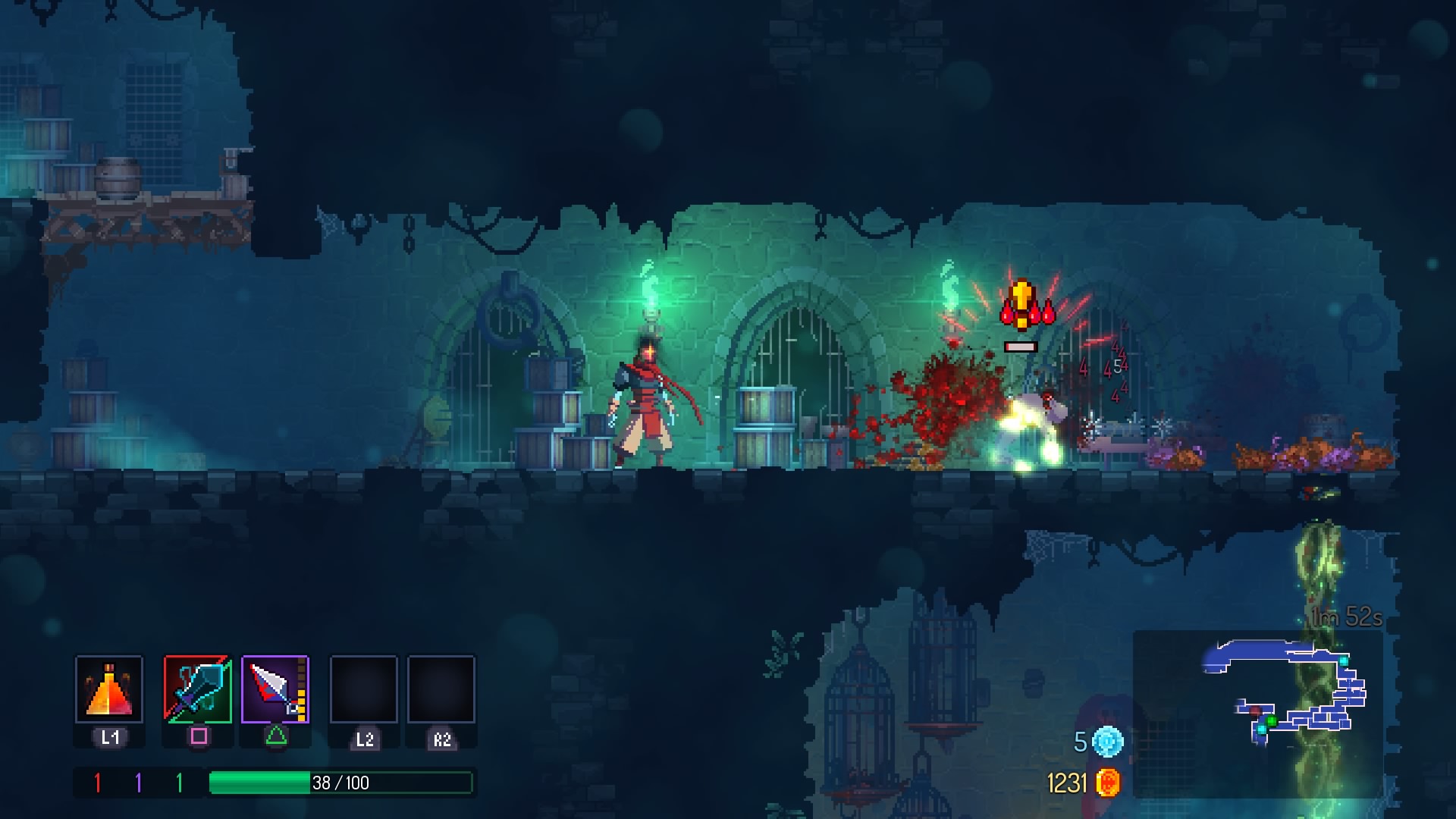 Status Ailments Are Your Friend

All the gear you pick up will accrue random passive abilities over time, which grow stronger or more numerous as you go. They often include the ability to freeze, stun, poison, or cause your enemies to bleed. You should be making the most of these options — especially stun/slow/freeze, which can give you the space and time necessary to dispatch enemies in an orderly fashion. I've gotten paranoid enough where I almost always default to at least one freeze item, because in Dead Cells, things can get absolutely nuts without any warning.

Keep Your Eyes Peeled for Combos

Many weapons have particular interactions with certain types of status ailments. Some do extra damage to creatures who are burning, for example. It's important to at least consider whether exploiting these combos is the right move. There are also more mechanical weapon combos, like both Sandals and Spears doing bonus damage against enemies who are up against walls. Wolf Traps can hold enemies in place so they take the full brunt of Saw Blade Launchers. There are combos all around you, if you take the time to look for them. 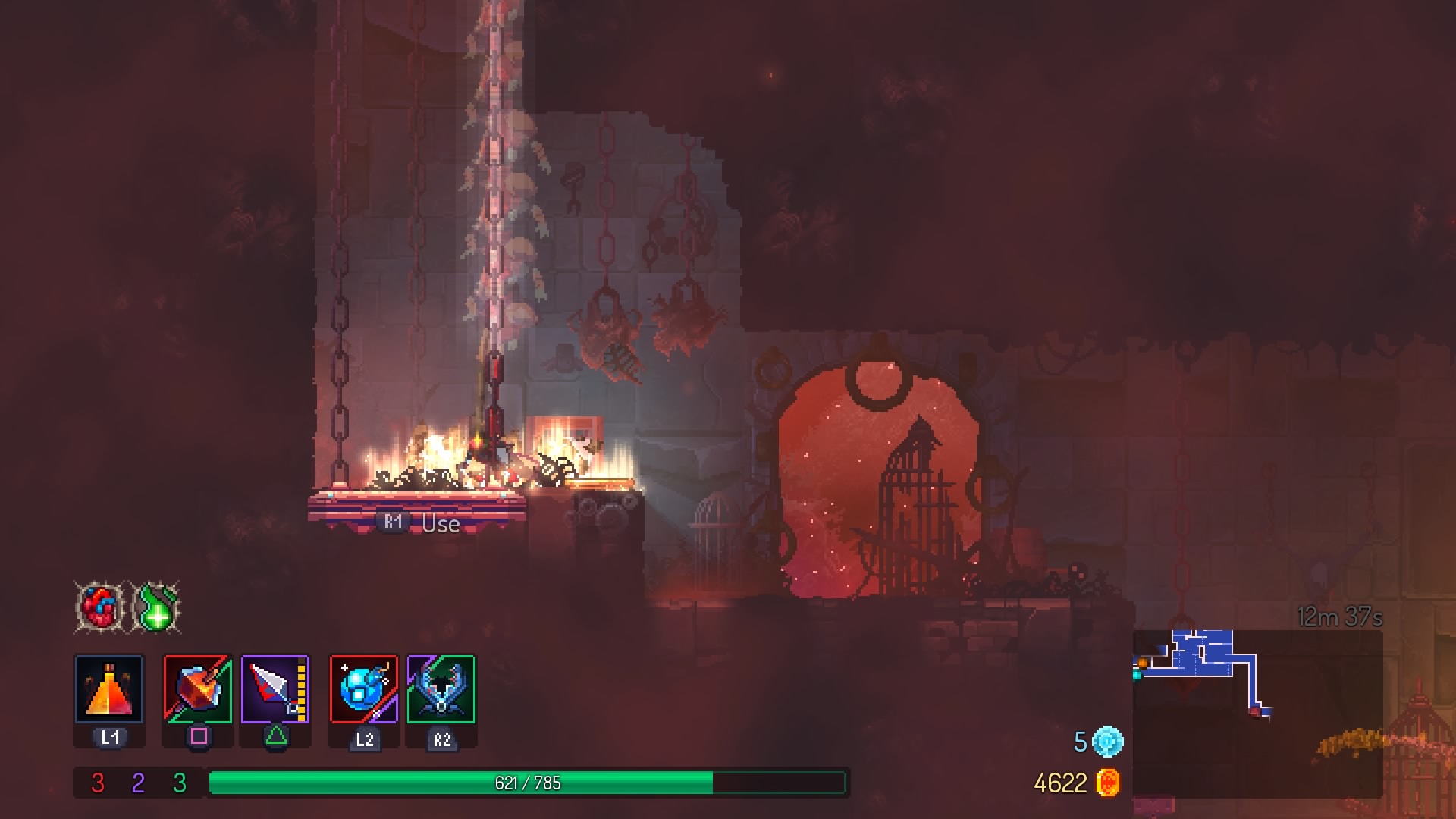 If you are descending to a lower area, holding down and jump will send you meteoring toward the ground. When you hit the dirt, every enemy in the area will be stunned for a period of time. Falling from a great height without ground-pounding will cause you to be dazed on impact (but you won't lose any health). The stun effect lasts a while, though, and if there are any threats around, they will not hesitate to attack you in your vulnerable state. Ground-pounding isn't hard to do, and the downside of not doing it can be dire.

Breaching involves shattering a door into splinters and stunning/damaging whatever is on the other side. There's almost no good reason to open doors normally, outside of common courtesy, but this isn't really the place for that. Attack or roll through every door you see, and your level clear times will thank you. 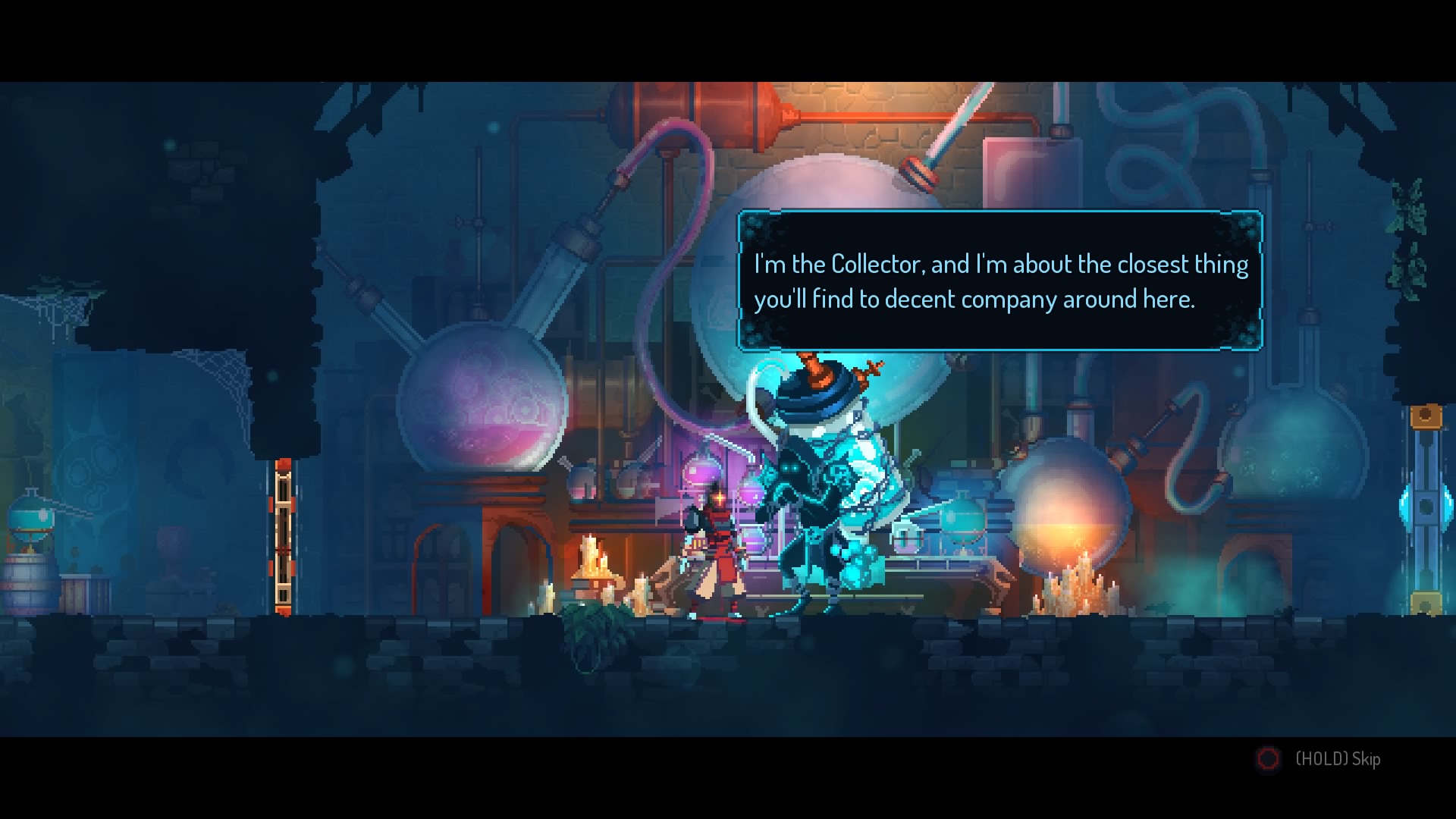 Spend Your Cells on Cheap Stuff

Until you unlock something that you definitely want to focus on, its probably a good idea to cash in on the cheaper options in front of you. This gives you a more diverse pool of potential weapons to find, and eventually you'll start to unlock things that offer more direct benefits, like health potions. Plus, many of the higher value unlockables requires you to unlock a certain amount of items as a prerequisite.

In my estimation, there are two ways to kit out your power scroll points. First, you can focus on the color weapons that you are using the most, to maximize damage and the effectiveness of matching mutations. Second, you can just focus on raising your HP as high as possible, which spreads the points out across your colors, but focuses on picking the highest health percentage boost in order to make you a tank. 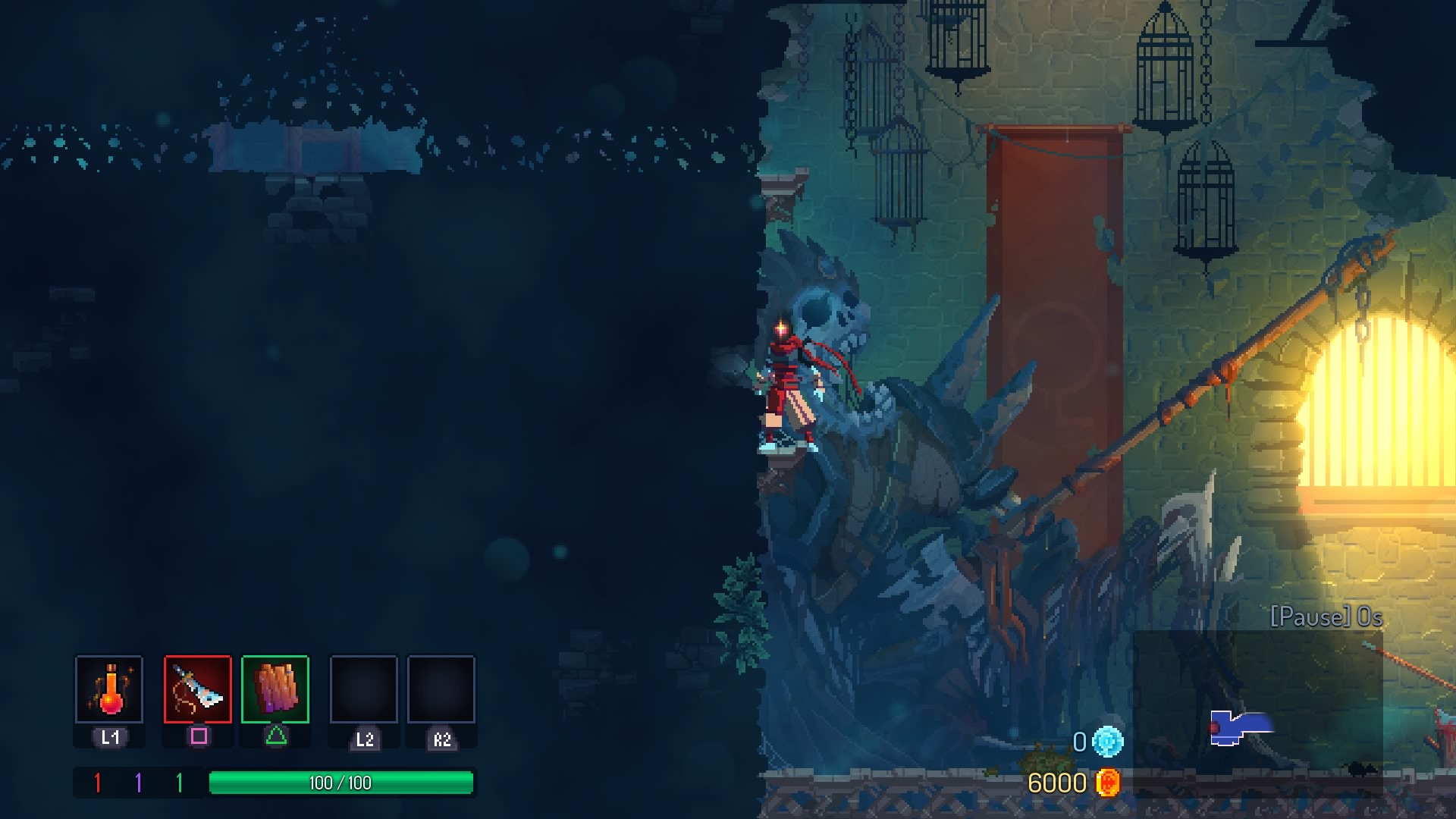 In the room you spawn in, there is a secret in the left wall. Just hop up, and roll into that sort of ivy-covered tunnel. Even though you'll see that room very often, it's easy to miss. You're welcome.

If you need more information about breaking out of prison in Dead Cells (or have some tips to offer to the class), head to the Official Dead Cells Wiki!