Valve's brand new card battle game, Artifact, is already turning heads. Its unique ruleset and daring departures from card game norms is making it the talk of the town. Even though it's not hard to learn, it can be difficult to get everything you need to know in your head after just one game. Hopefully, this guide can help you get your bearings. 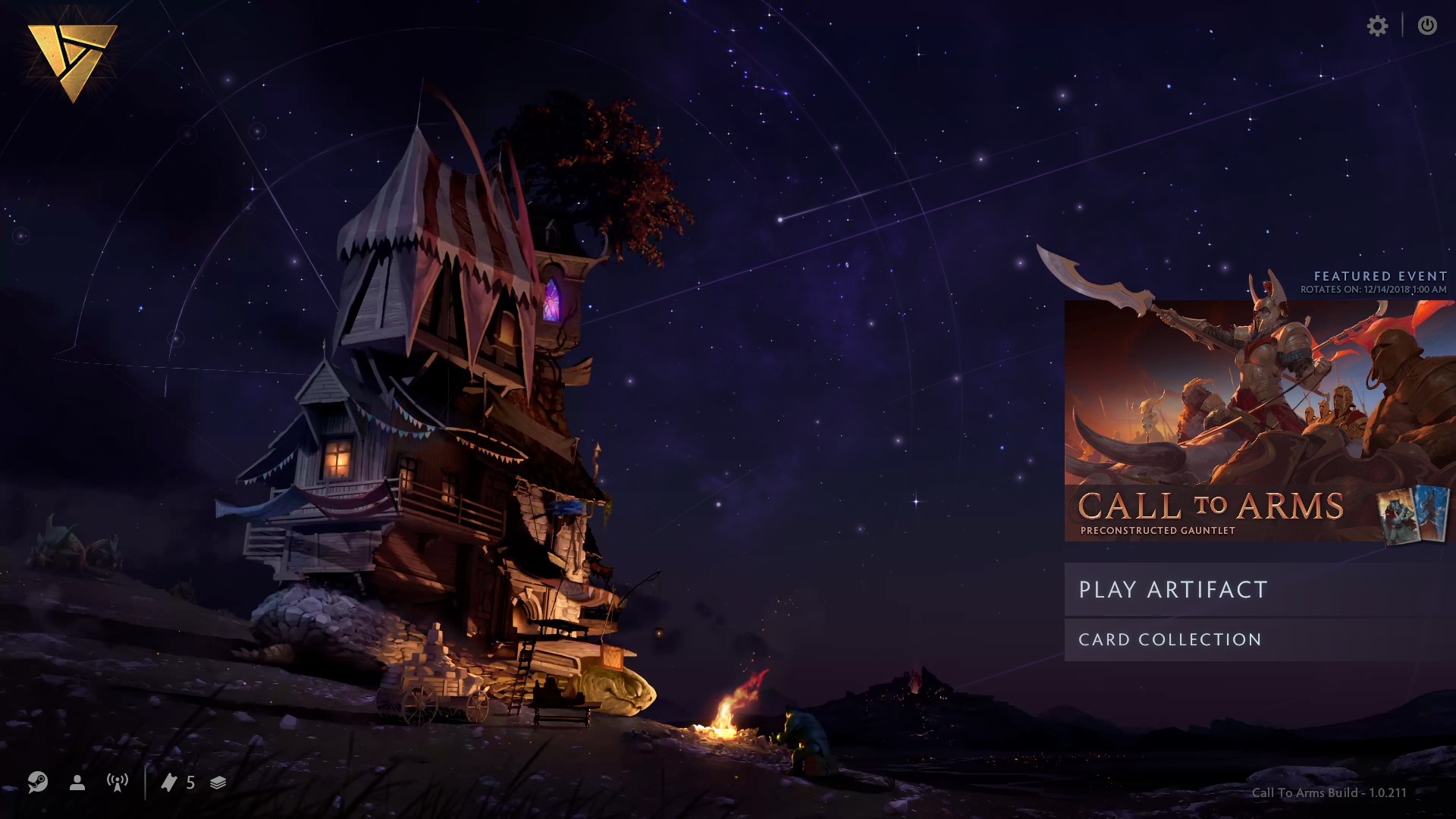 Artifact is a one-on-one battle between two decks of five heroes, spells, and equipment spaced across three different boards, called lanes. Your objective is to destroy two of your opponents towers, located on each board. When you destroy one 40 life tower, an 80 life tower grows in it's place, and destroying that will win the game as well. Each tower has a mana value that will increase every turn, letting you spend it on increasingly powerful things.

When the game begins, three of your five heroes are dealt on to the board, one in each lane. These heroes are accompanied by random minion cards called creeps. Creeps are technically any creature on the board that isn't a hero, so you can summon creeps from your hand to help bolster a lane. These starting creeps are specifically called melee creeps. Melee creeps spawn randomly every turn in your lanes and count as some free reinforcements. Once heroes and creeps are dealt, you draw a hand of five cards, and zoom over into the first lane.

There are three phases that get played through in each of the lanes per turn: Action, Fighting, and Shopping. During the action phase, players take turns playing creeps, casting spells, or equipping/using items.  You can only play cards of the same color as the heroes in that lane. If there are no heroes in the lane, then you can't play any cards at all. Players go back and forth in the action phase until both sides pass. 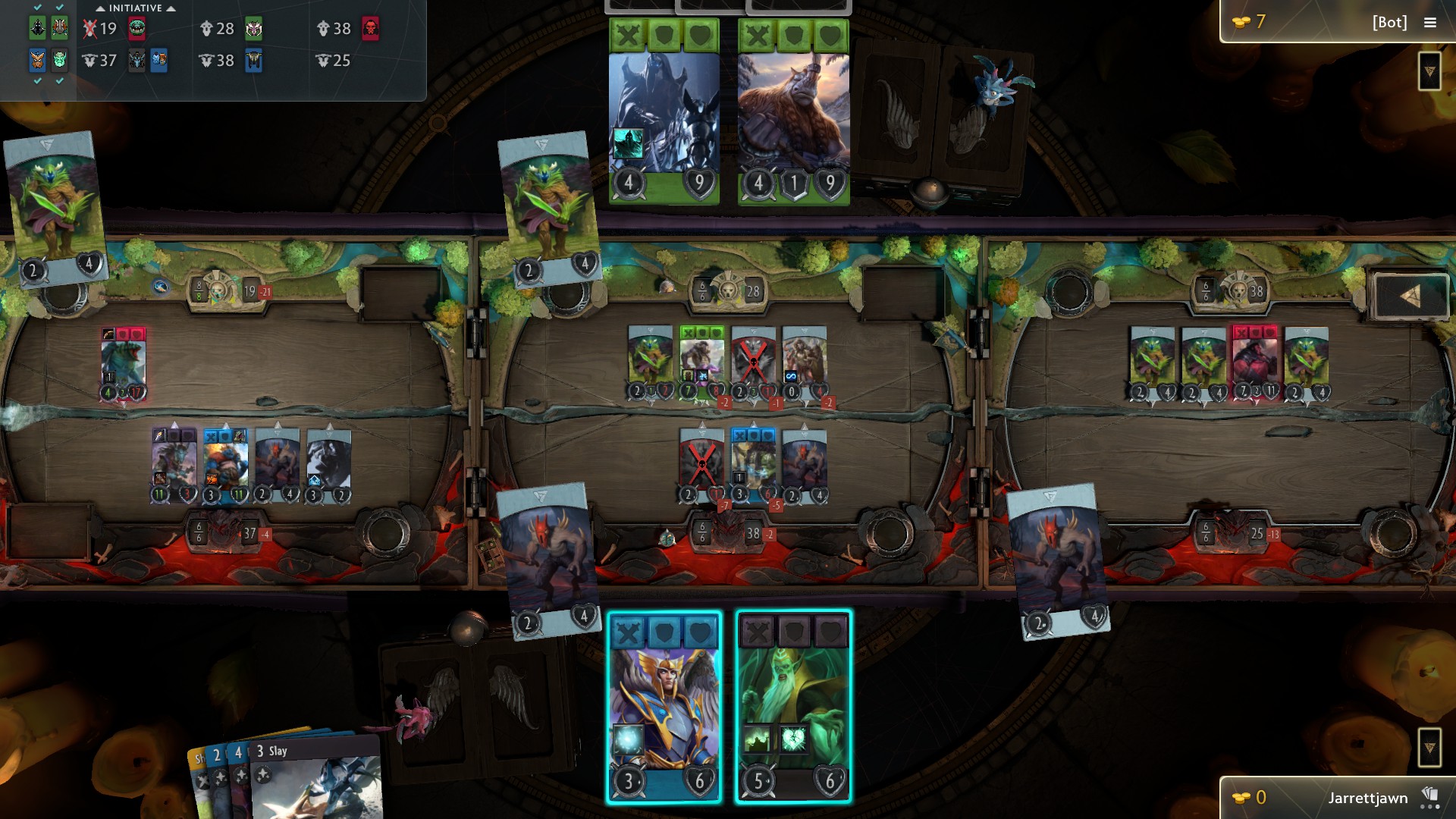 The fighting phase happens next, where all the combat scenarios you've modified during the action phase come to a head. In the action phase, you'll notice on the board that your cards will be earmarked by damage numbers, and sometimes crossed out. This shows you the damage that is about to be dealt to that individual creature, with X's meaning that they will die from it. You can see the damage creatures will do and the life they have on the bottom of the card. You'll spend a lot of time strategically placing creeps to deal damage or block damage being dealt to your tower. You'll also find that buffing and using equipment on your heroes will help turn exchanges towards your favor. Once you've done all you can do, the displayed result happens, and you move on to the next lane to start the action phase again.

Once every lane has been completed, we move to the shopping phase. You gain gold for killing creeps and heroes in combat, as well as having towers standing. Here is where you spend that gold on items. There are three types of items to spend it on. Consumables are one use items that do things like heal your heroes or call them back into your hand. You can draw from your item deck which is a set of cards that you pre-construct to bring into battle with you. Lastly, the Secret Shop offers you a random alternative to what's in your deck,  and will change each turn (unless you pay a gold to hold it there).

After the shopping phase, you return to the board, where you'll see new melee creeps are ready to deploy, as well as your next hero. Unlike the first turn, you'll be able to chose where your hero goes from now on. When heroes get taken out in combat, they can be redeployed the same way a couple of turns later. When a creature hits the board with no target across from it, a random directional arrow is dealt to show you where it will attack (either the tower or an adjacent creature.) This is basically the rhythm of the game until either you feel the rousing swell of victory, or the crumbling crush of defeat. 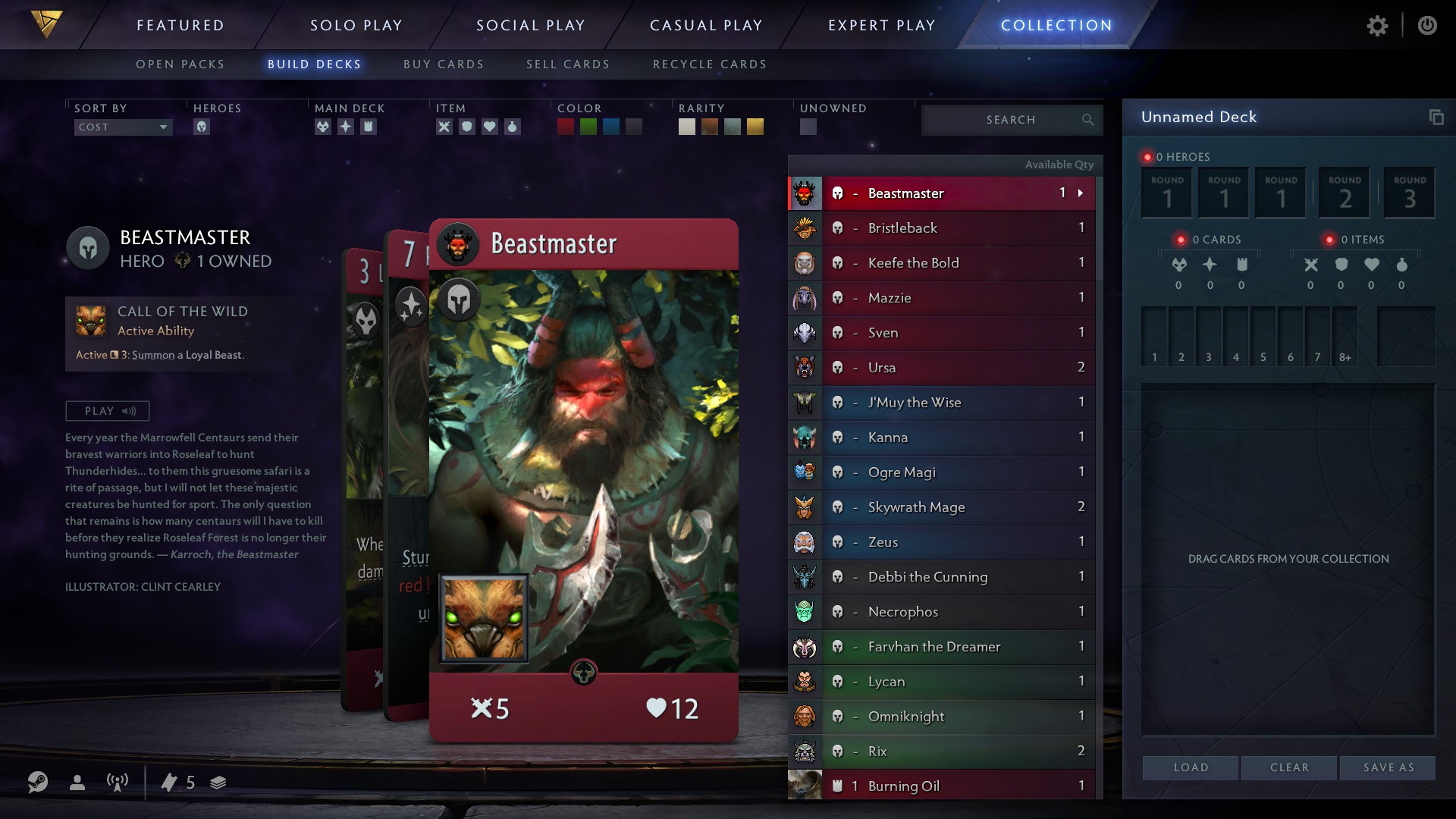 Before you even get into a game, you'll have to make a deck. It's a relatively simple process, but some information can be deceiving, or at the very least not obvious. So lets take a look at cards and deck building a bit.

There are four colors that represent different overall strategies and ideologies. Green is about steady growth and big creeps. Red is about rapid, temporary buffs, and destroying enhancements. Blue is about mana game and board control. Black is about dominating with direct damage and raising lots of gold. You can have up to two of these colors in any deck, so knowing what sort of play style you're going for starts at your color selection.

From there, you need to select up to five heroes. These heroes will set a more acute tone for you deck, narrowing down the spells and abilities that will be the meat and potatoes of your gameplan. Each hero comes with three unique cards that only they can provide, meaning your deck will be 15 cards strong before you even start rummaging through the rest of your collection. 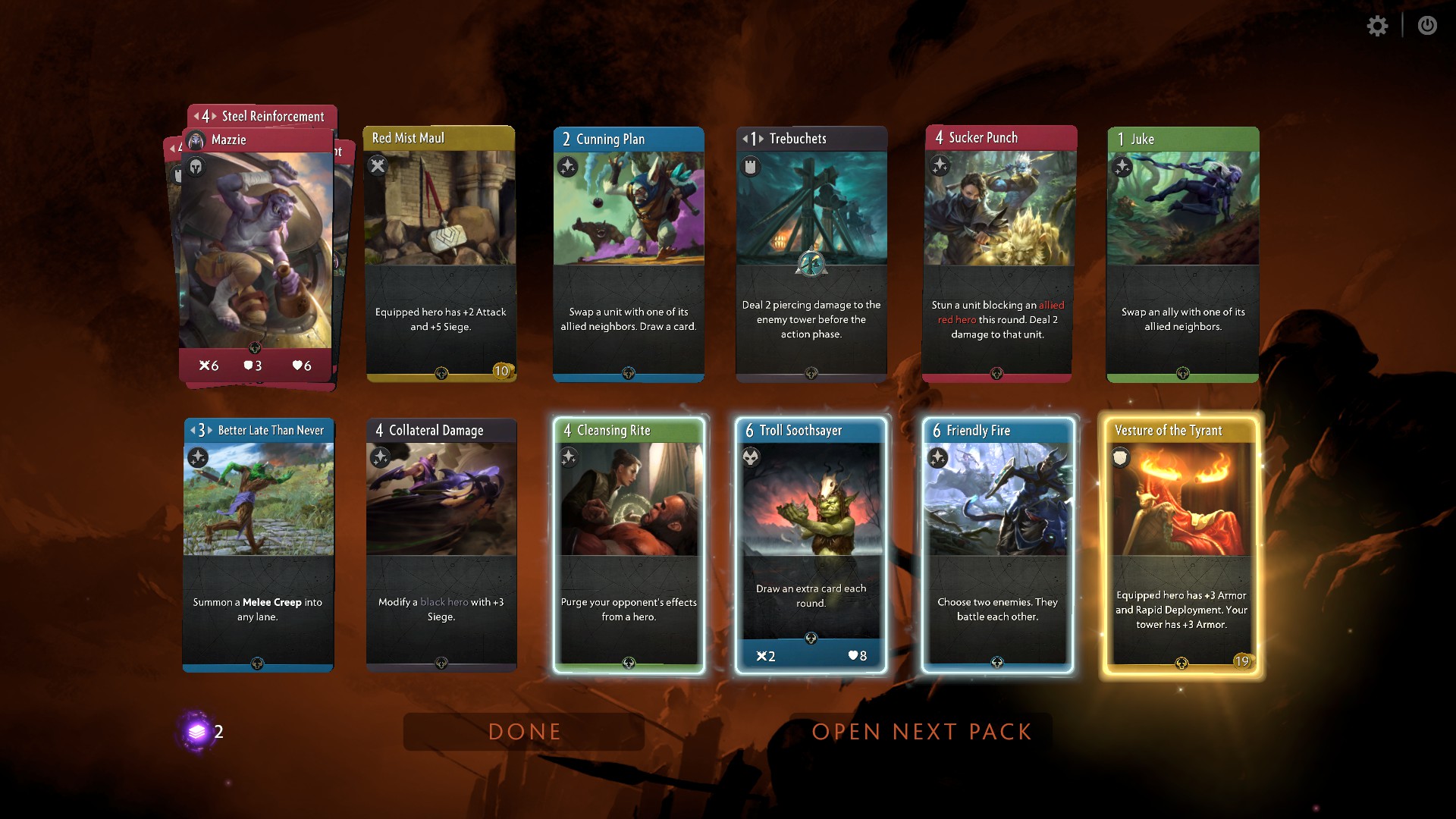 But when you do decide to dip into that collection, you have to add enough cards to reach to minimum of 40. Grab creeps, enhancements, spells, etc. and the hud will show you all the relevant information about them, as well as give you some meta stats like mana curve. Also remember to fill in your item cards, which is a separate mini deck. Put them together, and you have a playable deck.

To add cards to your collections, you gotta buy them in the marketplace. The Artifact marketplace is a cash store that operates a lot like CS:GO or Team Fortress 2's, except, of course, that Artifact cards aren't just cosmetic. Every booster pack is $2 and contains twelve cards, but each individual card can be bought and sold on the marketplace as well. 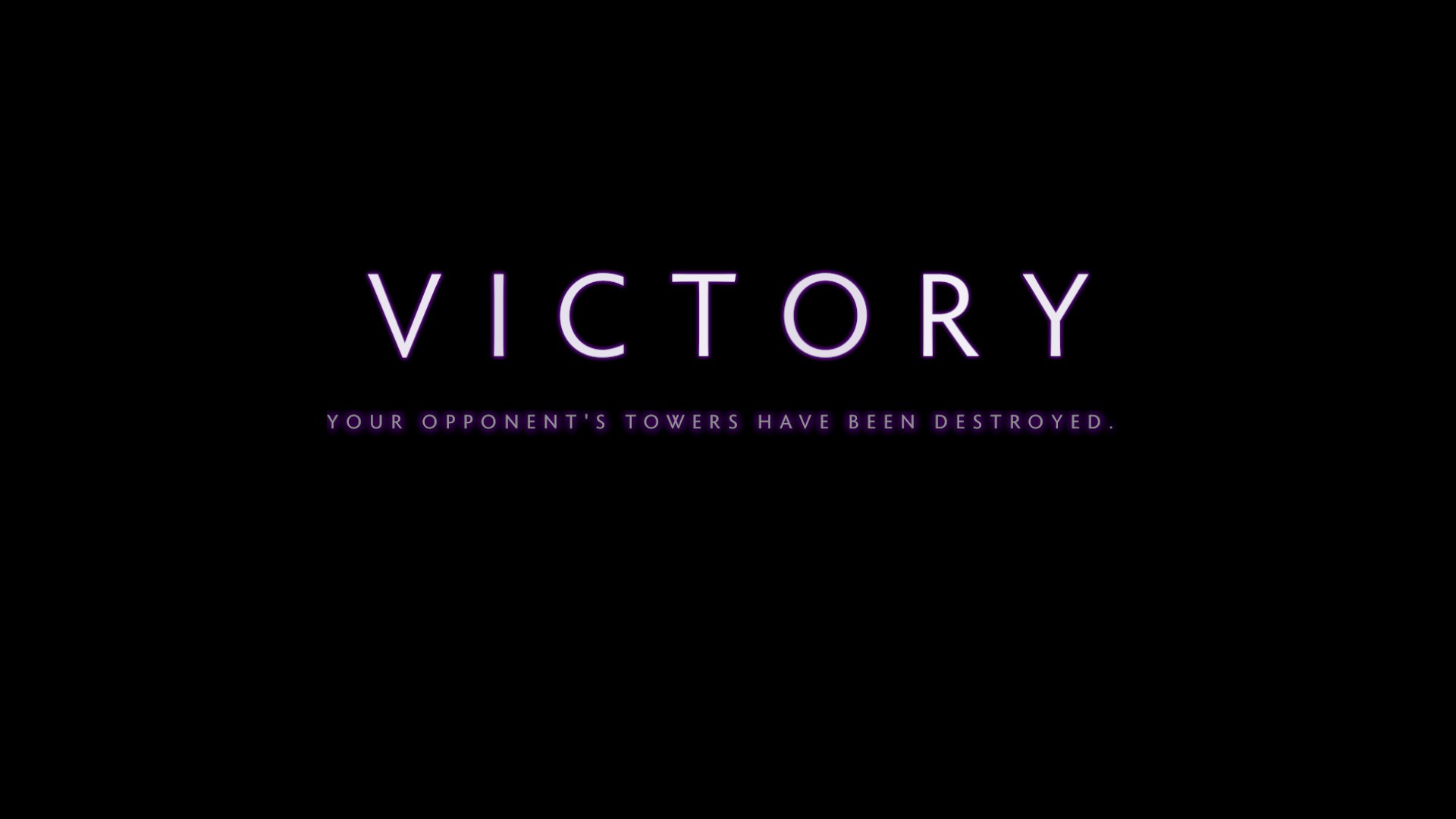 What They Don't Tell You

Artifact isn't difficult to get the basic jist of. That said, there's a handful of things they don't tell you about that you should probably know.

There's still so much to know about Artifact that it would be impossible to capture it all here. Instead, we have a place for that: our Artifact Wiki. See you there!