Artifact has had some time to percolate in the wild, so naturally there's been a lot of time to examine the card set. It didn't take long for some stand outs to make themselves known, but some of the better cards have sort of snuck up on the meta as well. For any beginner who just cracked open their initial packs of cards and are wondering where to go from there, this list is for you. The cards below are ones you should definitely invest in, especially after you narrow down what colors and play style suit your fancy the most. These cards are less situational and more "this is always a good choice and worth building strategies around." 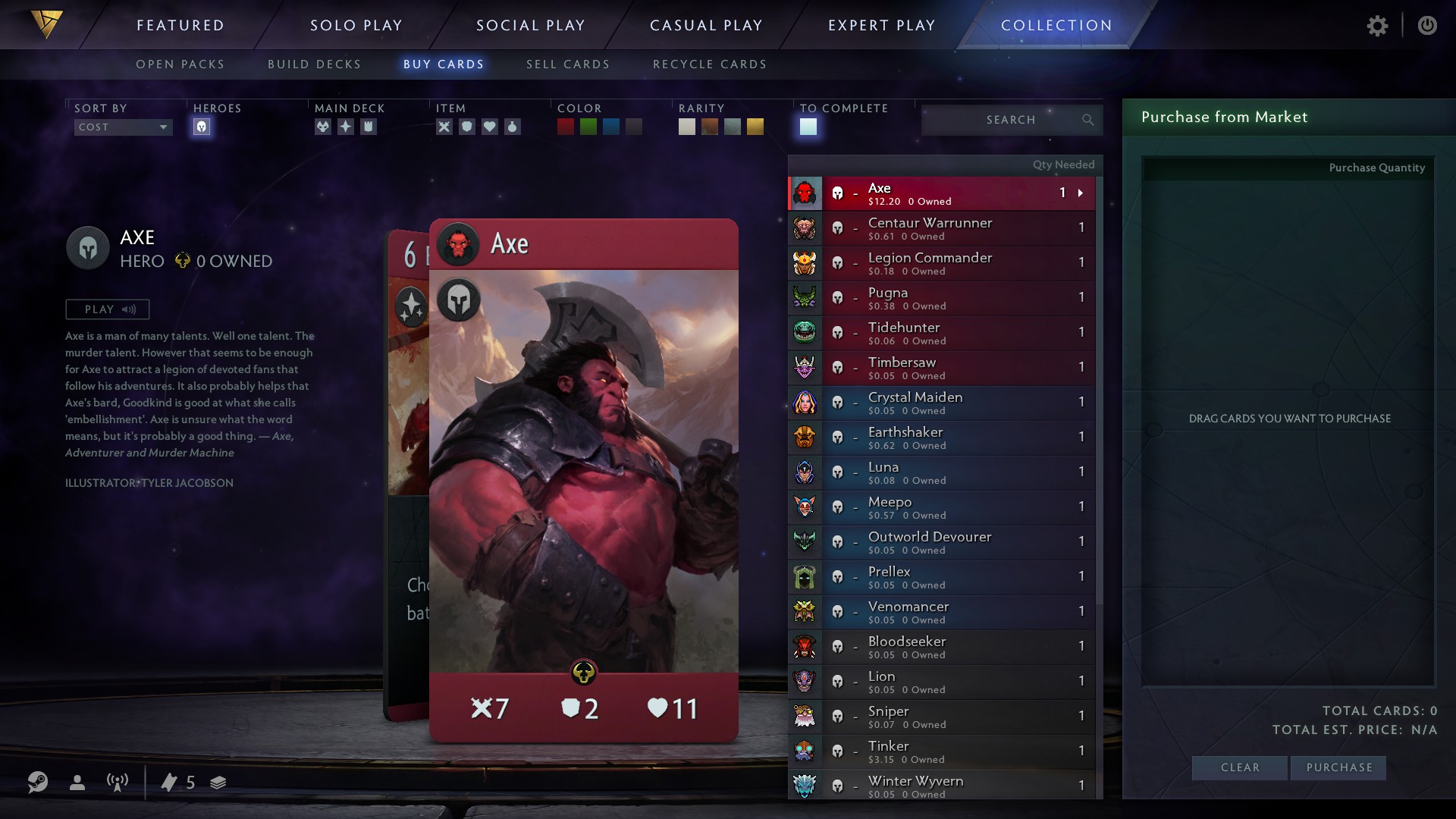 Axe is so powerful that he doesn't even have a hero ability. He has incredible attack and health stats and built in armor. Besides that, his signature card, Berserker's Call, allows you to use your creeps and heroes to clear enemies in combat before the combat phase. Since you're playing Red, there's a chance that your allied face beaters are suited for just that very job.

The Drow Ranger proves that stats aren't everything. She won't be assassinating with her meager 4 attack, but her mere presence gives all allies +1 to their own attack. Her signature card, Gust, can silence all enemies in a turn. That means they can't cast spells or use their own abilities. That's a game-changer.

Attack, armor, and health-wise, Legion Commander starts off strong. Her passive gives her +2 retaliate, which makes her even stronger in combat with other creatures. And with her cheap signature card, Duel, she can force people to fight her (or anyone for that matter) on her terms. Selective creature removal is very important in Artifact.

Lich's value comes in his signature card, Chain Frost. It does 3 damage to a target unit, and then can bounce to the left or right up to 6 more times. So long as there are enemies next to the target, it will move again. This can be perfect for thinning big creep waves. 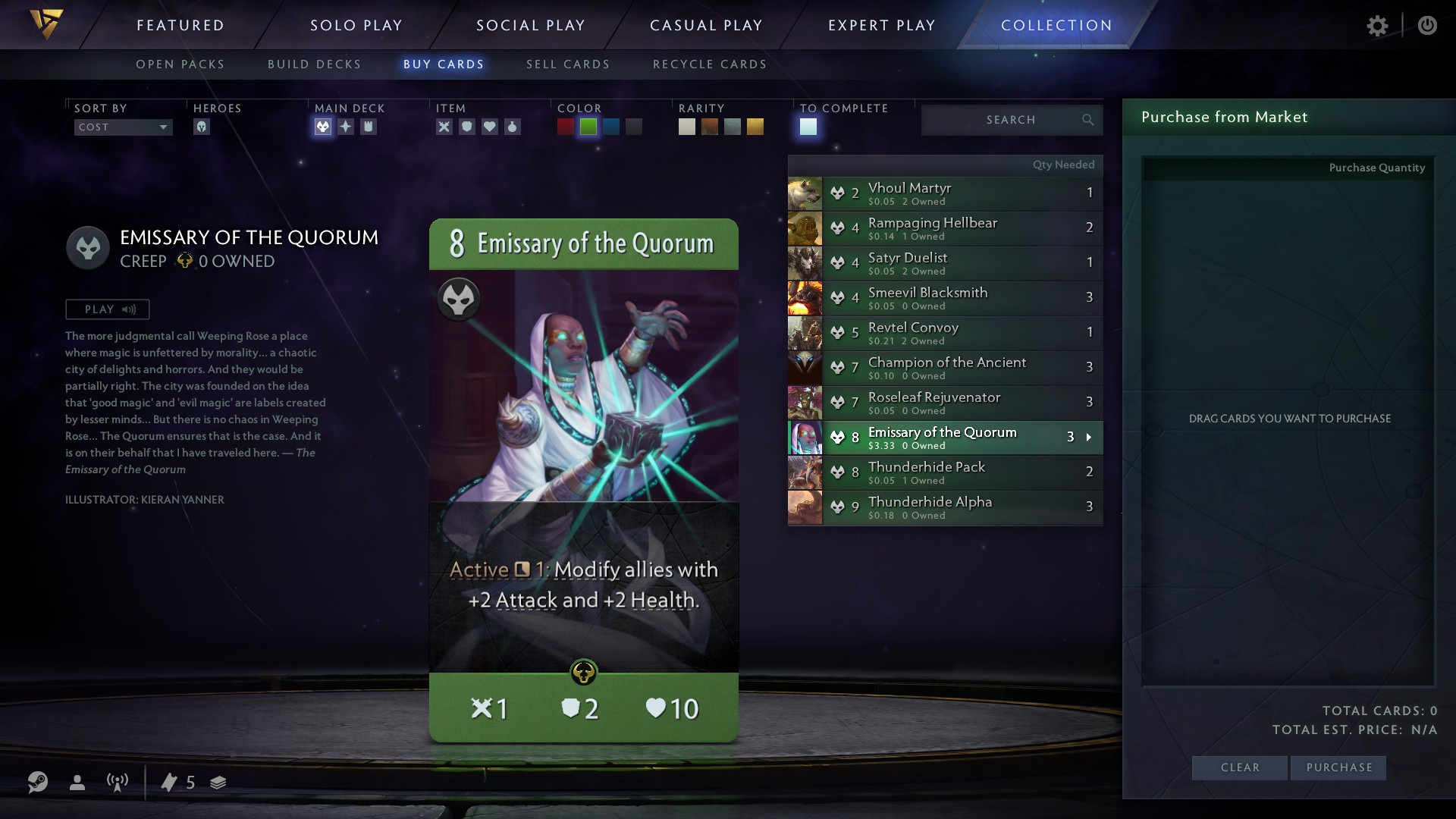 Emissary of the Quorum

The Emissary's own high health keeps it on the table long enough to get a lot out of her active ability. On a one turn cooldown, she can modify all of your allies with +2 Attack and +2 Health. Perfect for that finishing push.

If you find yourself sitting on a decent pile of gold one round, it might be worth saving it for the Mercenary Exiles. At the cost of your whole gold stack, you can add half of what you spent as Attack and Health to them. A 10 gold turn can transform these guys into a problem very quickly.

Remember the goal of Artifact —to destroy your opponent's towers. Remarkably few cards let you attack your opponent's tower directly with any real force. Oglodi Vandal will do 10 percent to a stage one tower just by showing up, and still be a 4/0/4 on the field in an attempt to do it again. 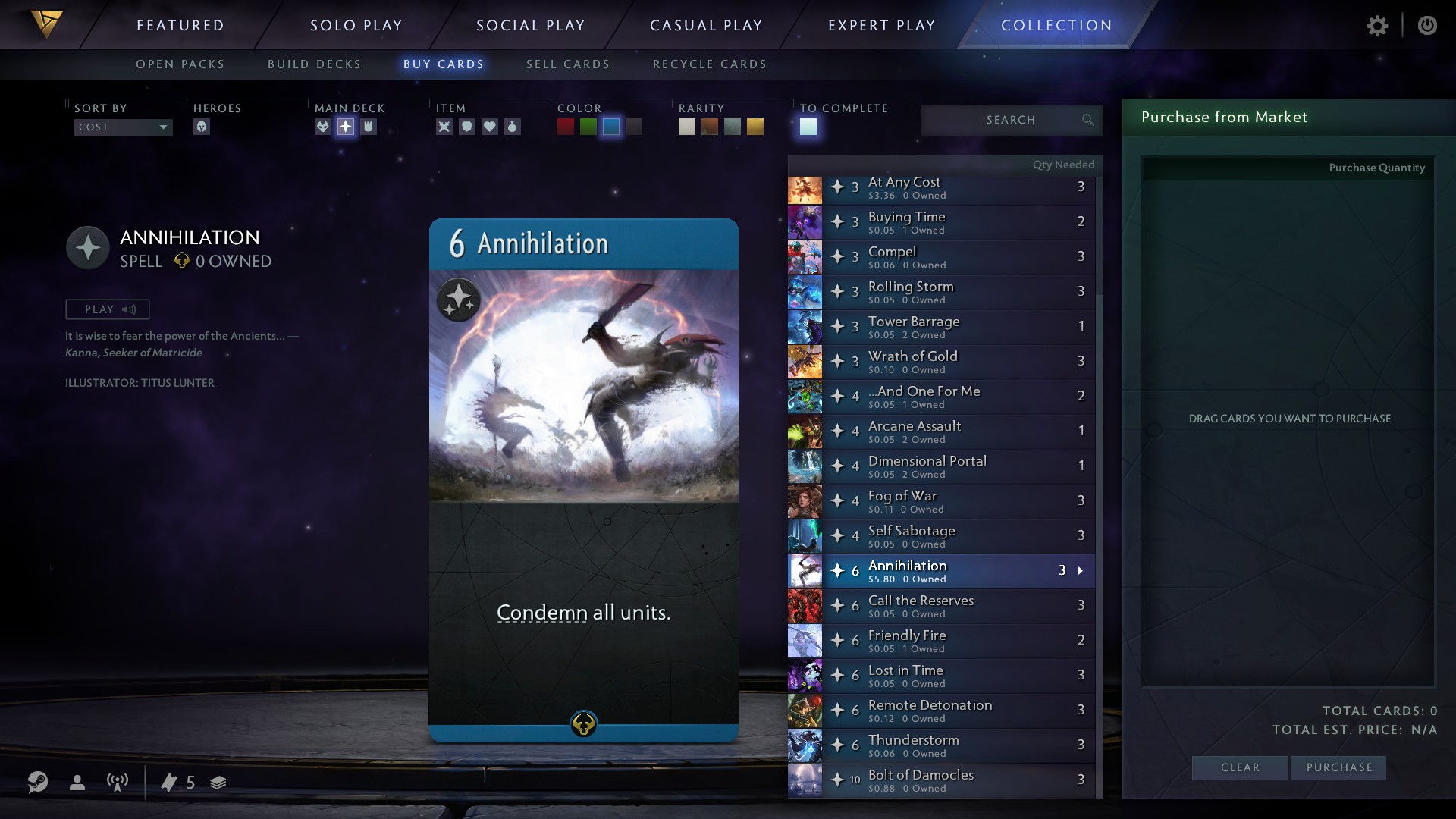 This second turn card can be essential for mill heavy blue decks who want to cast as many spells as possible in a turn. When Aghanim's Sanctum is online, you can fully restore the mana for the relevant tower, doubling your pool.

Magic players are well aware of big board clearing spells like Wrath of God or Damnation. This is Artifact's version. Annihilation does no damage, just simple condemnation for every creature in play.

There may not be a more overwhelming single spell buff int he game than Time of Triumph. It gives plus 4 to all of your allied cards stats, and adds Cleave, Siege, and Retaliate to ones who didn't already have it. By the time ToT drops, it's usually game over.

This first turn improvement lets you draw a card at the end of the combat phase if the tower it's attached to took damage this round. The only way Unearthed Secrets isn't extremely valuable is if it's destroyed immediately by something like Smash Their Defenses! or if you're winning lane so hard that you aren't taking damage.

Clearing the way through creeps to the tower is an essential round-to-round process in Artifact, so cards that can do direct damage to them are great choices. Pick Off is among the best, because you can target creatures in any lane. 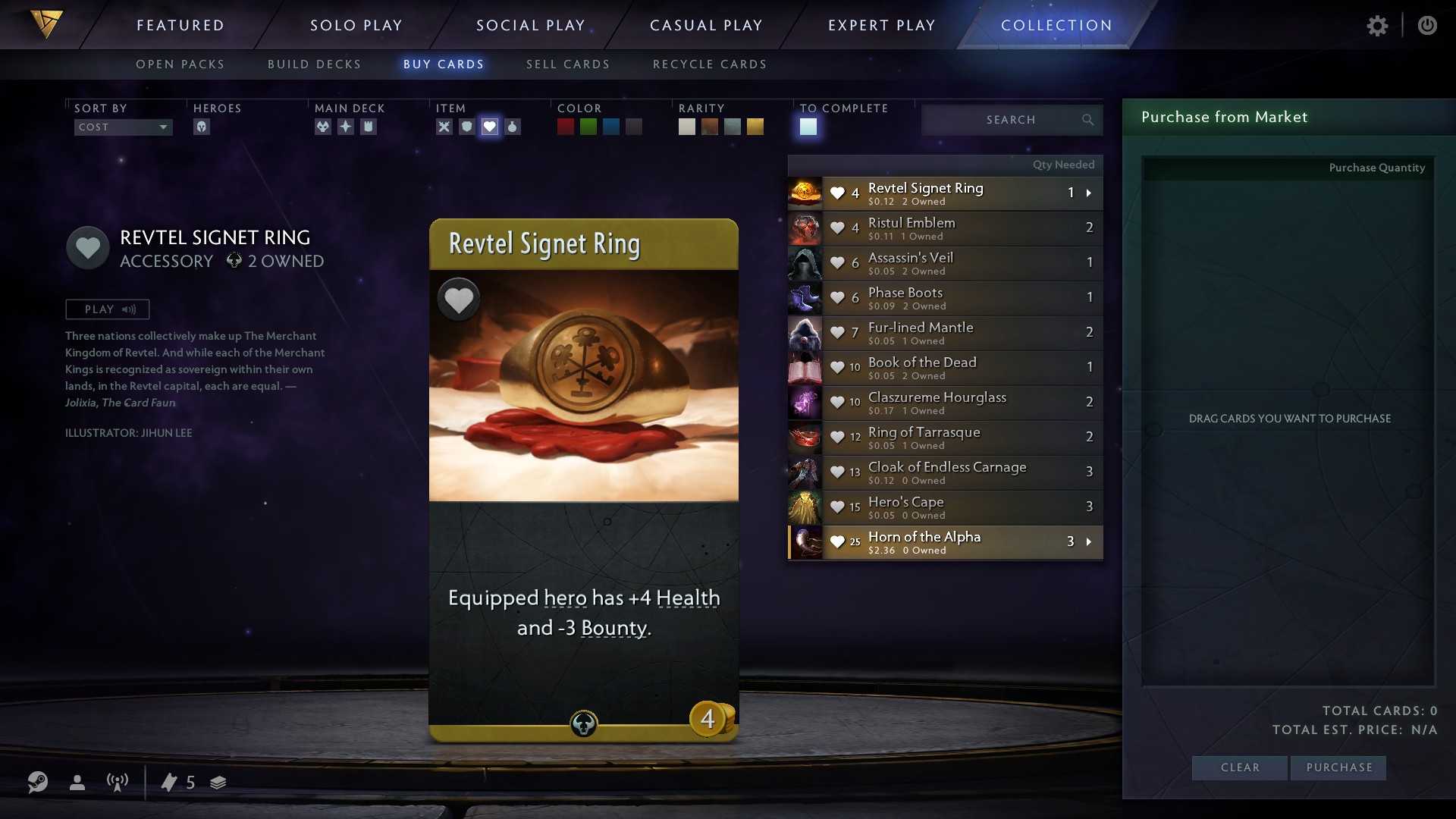 As mentioned before, getting to hit towers without first trudging through minions is a difficult task. Siege tends to be the answer, so an item that grants a pretty decent amount of it is absolutely worth the gold. Red Mist Maul is such an item.

Mobility is key in Artifact. Heroes are stuck in the lanes you plop them in unless the die, or you take special means to move them. An item that grants them the ability to change lanes as well as boosts your attack is a keeper. Blink Dagger is a more offensive version of Phase Boots, but the boots only let you swap with other allies. The dagger lets you move where ever you want.

The Stonehall Cloak is a bread and butter accessory that has the potential to make a hero more and more tanky every turn. And it's a cheap gold cost, and since its a common card,  there's a good chance you already have a playset of them.

Horn of the Alpha

This is a risky accessory because it's prohibitively expensive. But should you have the chance to purchase and equip Horn of the Alpha, you've immediately upped the ante. Besides giving your chosen hero +4 health, you've also given yourself access to TWO Thunderhide Pack, 14/0/14 brutes with 6 Siege. Neither towers nor creatures stand long underfoot of these beasts.

This is one of the best four gold you'll spend in Artifact. The Revtel Signet Ring gives the equipped hero a decent health boost and lowers their bounty. That means that the enemy will earn three less gold for killing them, which is just mean, really.

These are some of the most powerful cards in the game, but these aren't the only cards you'll see get play time during your rounds of Artifact. If you want to see the whole list of whats available, some to our Artifact Wiki!

Play by Your Own (Server) Rules in Legends of Aria