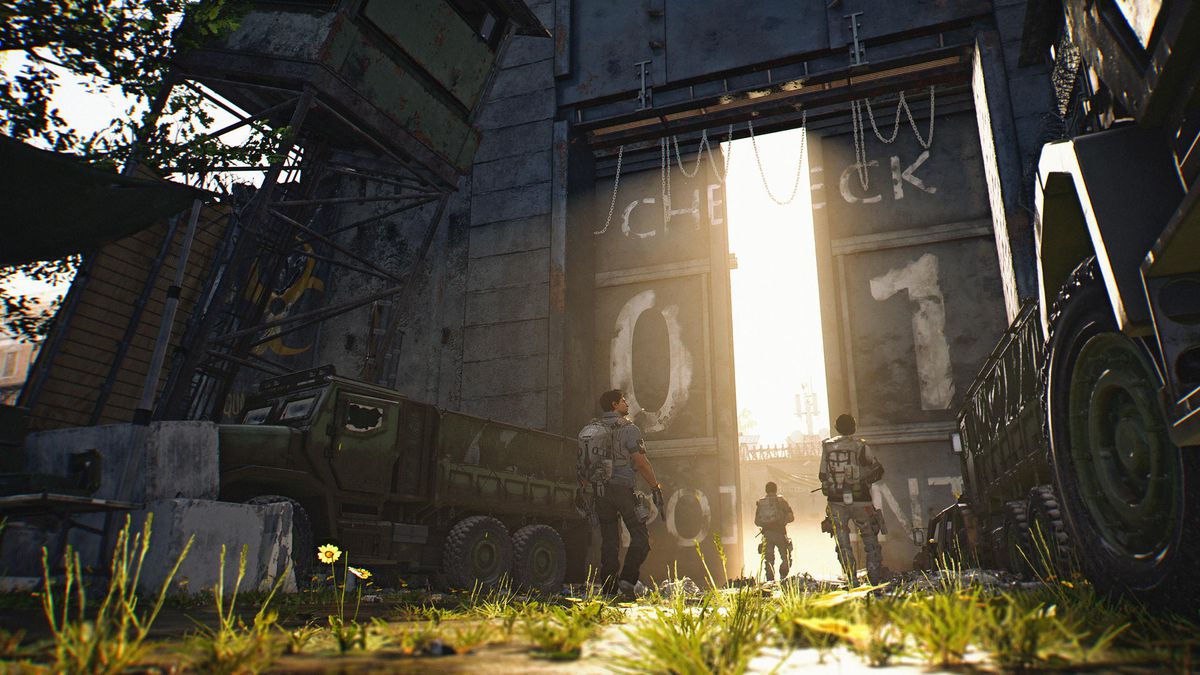 The Division 2 has an extreme amount of PvE content available for players to progress through, but players interested in PvP will definitely not be disappointed. The developers invested a lot of time and effort into improving the PvP content this time around with the return of new Dark Zones and a brand new PvP focused mode called Conflict.

The Dark Zones are a PvEvP area within The Division 2 that not only pits players against difficult enemies, but also against themselves. Players who are familiar with The Dark Zone in the first game will find a lot of similarities in the newest iteration; however, there are many new welcome changes that increase the fun factor of adventuring in these new Dark Zones while also decreasing the frustrations that were inherent to the system.

In order to unlock the Dark Zone, players will need to first recruit Senait Ezra, the Dark Zone Officer, by completing three missions for the Theater District Settlement. Once that is complete, players will be able to complete several recon missions into the Dark Zones which act as a tutorial for the system without the added pressure of enemy players. Additionally, you will gain insight into the story behind each Dark Zone available. 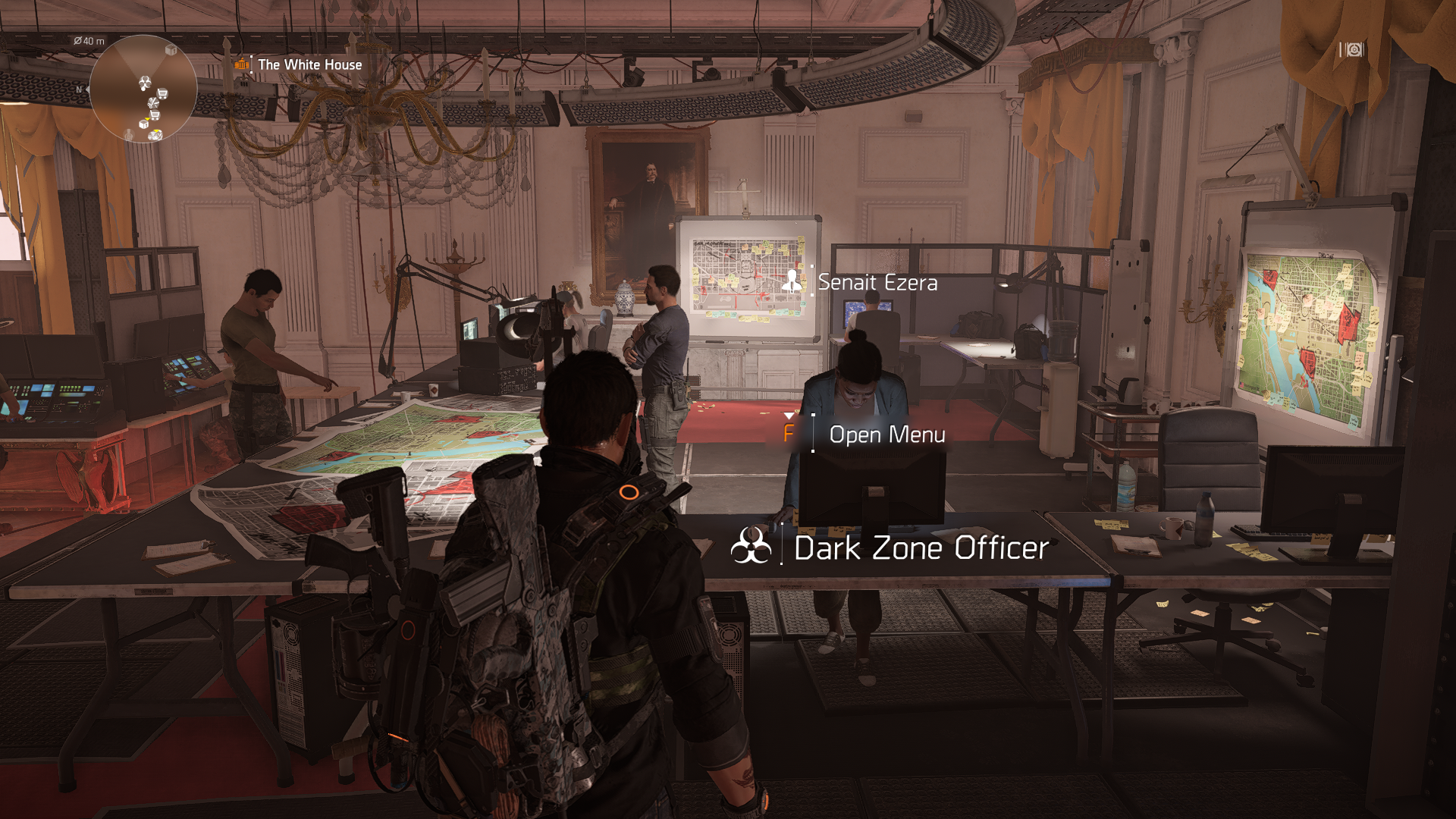 In The Division 2, the Dark Zone is split into three separate zones, each with their own unique layout, theme, and enemies. Hyenas occupy DZ East, True Sons are in DZ South, and the Outcasts are in DZ West. Each Dark Zone has normalization on, which causes players and enemies to be relatively equal in power level. This means you will not be killed in one shot by a player who has significantly better gear than you do. Players can choose to go rogue at any time, allowing them to kill other players in the Dark Zone and steal their loot; however, this must now be done through an option in the menu. It is no longer possible to intentionally (or accidentally) shoot another player to go rogue.

Rogue agents can be attacked by other players at any time and will have the Man-hunted status applied to them if they kill enough players, causing them to be visible on the map to players who wish to hunt them down and get revenge. Rogue agents can either hide and lose the rogue status slowly over time, or they can hack SHD tech terminals and steal chests to find the new Thieve's Den with an exclusive vendor. Doing so will remove the rogue status.

On a regular interval, one of these Dark Zones will become Occupied, as indicated by the knife icon on the map. Occupied Dark Zones have the normalization turned off and the new changes for going rogue are reverted. For players wishing to avoid the frustrations of the Dark Zone from the first game, simply play in one of the other available DZ's during this time. 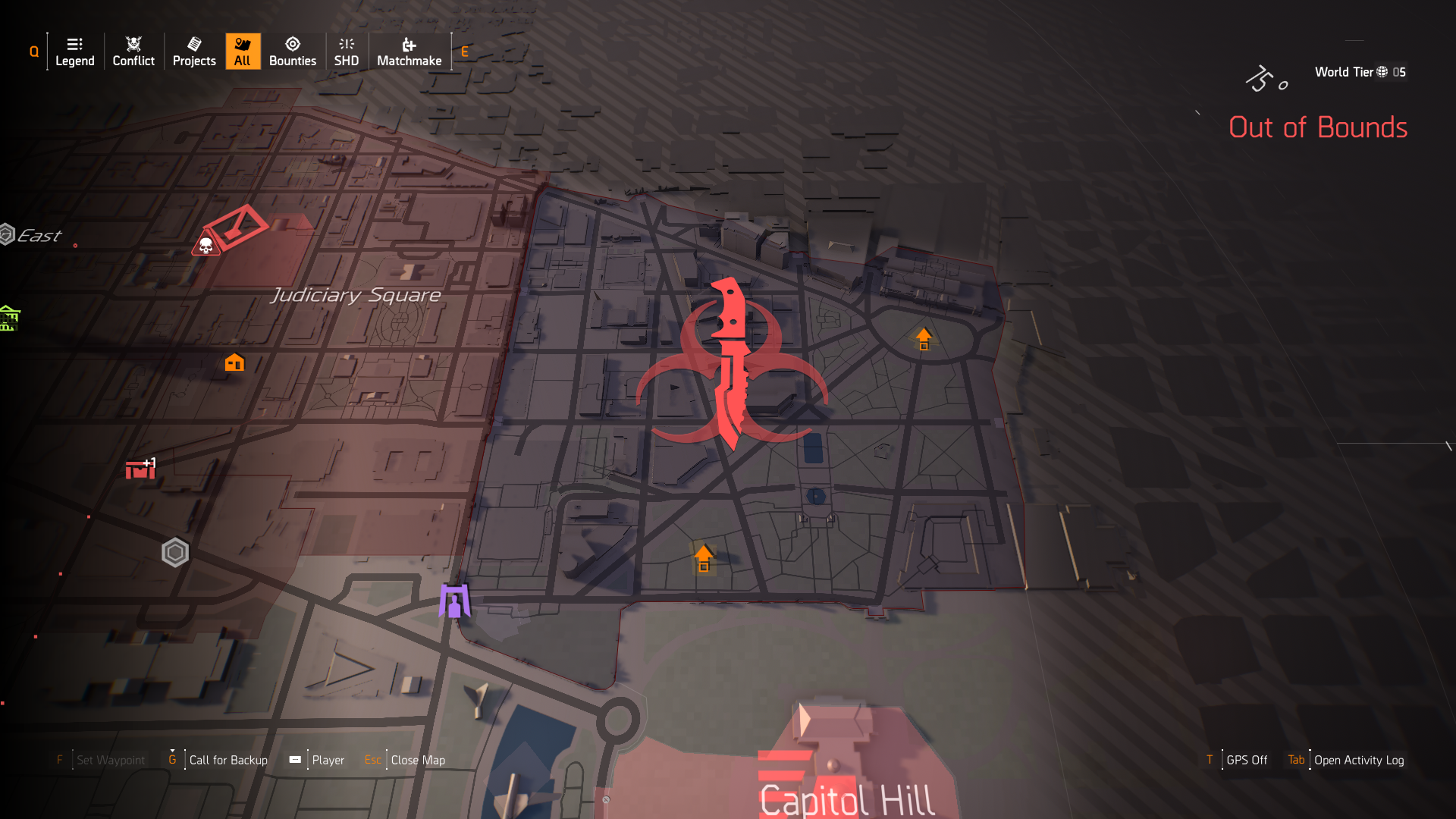 Contaminated loot returns in The Division 2, and any successfully extracted contaminated loot will appear in your stash the next time you visit it; although, during extraction, your loot can be stolen by rogue agents, so be sure to protect the extraction point! Thankfully this isn't the only way to gather loot from the Dark Zone, and players will now find plenty of powerful normal loot that they can simply walk out of the Dark Zone with at any time. This helps reduce player frustration when you've invested significant time into extracting a powerful item, only to have it stolen at the last second.

Dark Zone levels also return with The Division 2, and players who take the time to earn DZ levels will be rewarded with new DZ only perks. Each milestone has several powerful perks to choose from, allowing players to create builds suitable to their play-style, and players looking to change things up can reset their perks at the base of operations. 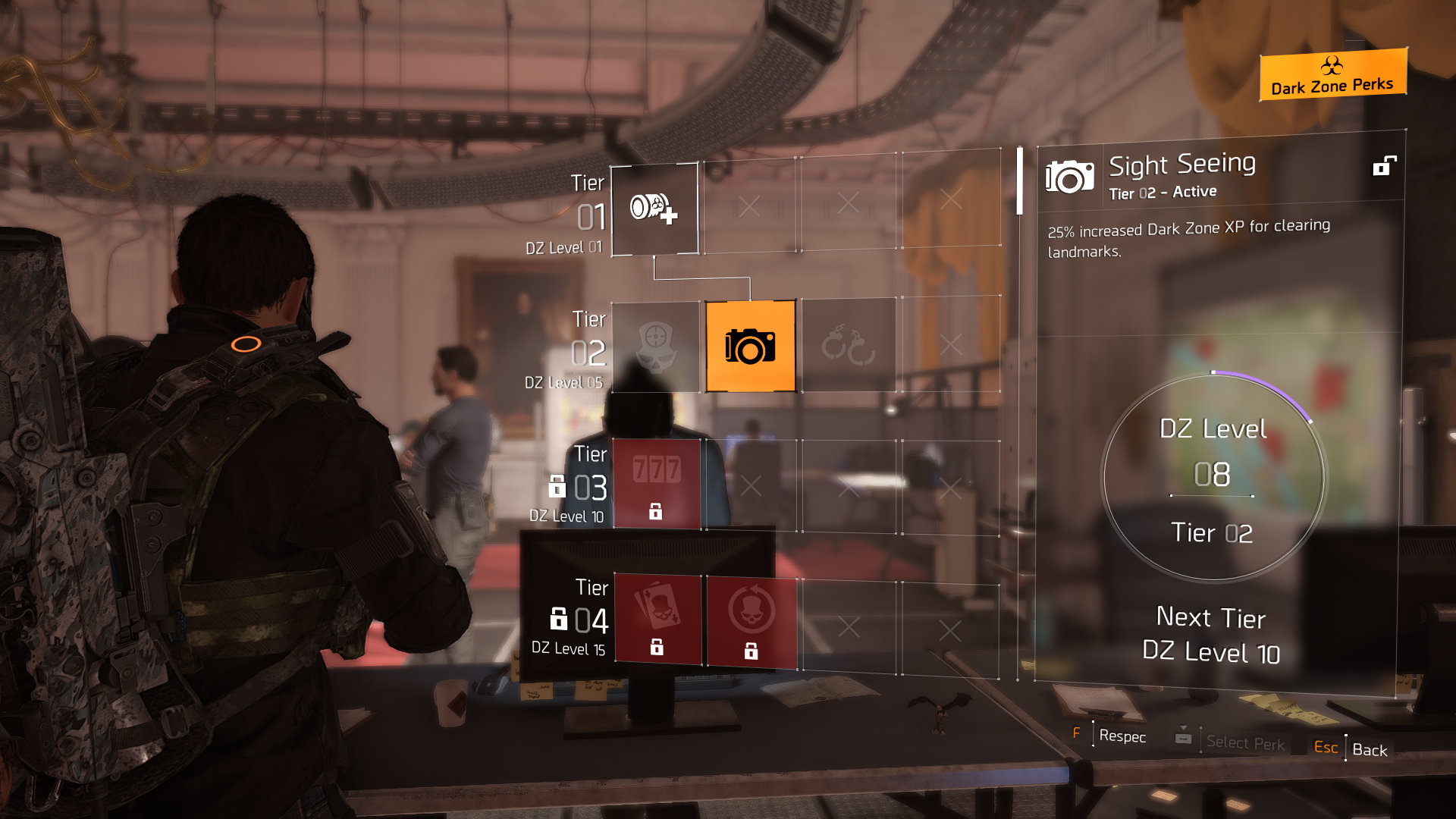 Conflict is a new 4v4 PvP focused arena mode within The Division 2 for players who want to PvP but do not want to play in the Dark Zone. Players can queue for Conflict either solo or with a group by opening the map and finding the Conflict tab. There are two available game modes in Conflict. The first is Skirmish, which acts as the game's deathmatch PvP mode. Each team as a set number of lives available, and respawning with consume one of those lives. The last team standing wins!

In Domination mode, players will need to work together to capture and hold territory. Your team's score will increase while controlling territory, and the first team to reach the score limit wins. While both of the conflict modes are relatively simple, they allow for layers of complexity when determining what build and weapons you and your team will enter with. 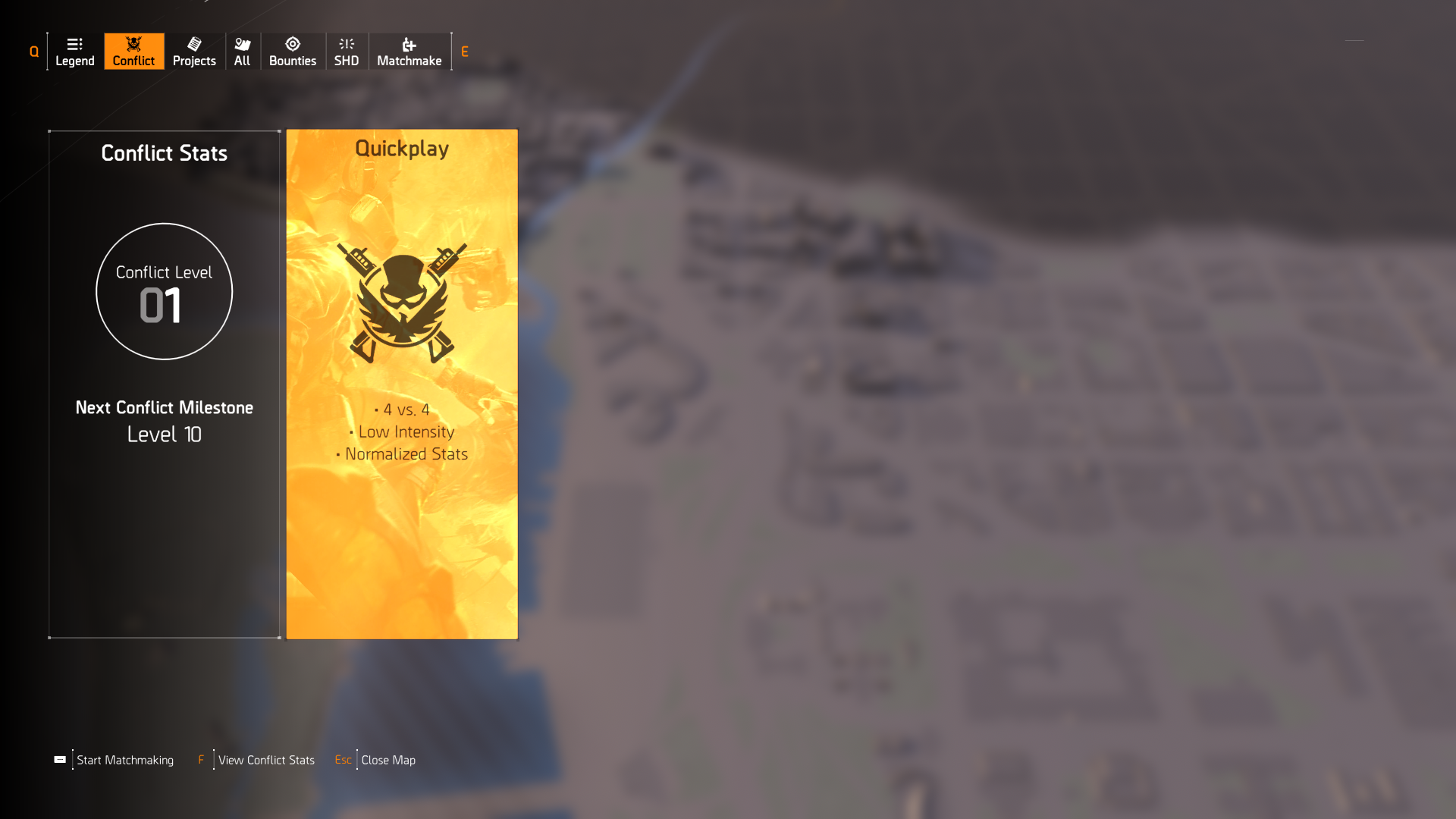 Do not forget that there are daily and weekly projects available to complete for PvP, and you can access the available projects by opening your map at any time! These projects can be one of many different objectives, such as killing specific types of enemies in the Dark Zone or opening a number of chests. Completing projects offer another way to get gear for players who wish to engage in PvP within The Division 2! 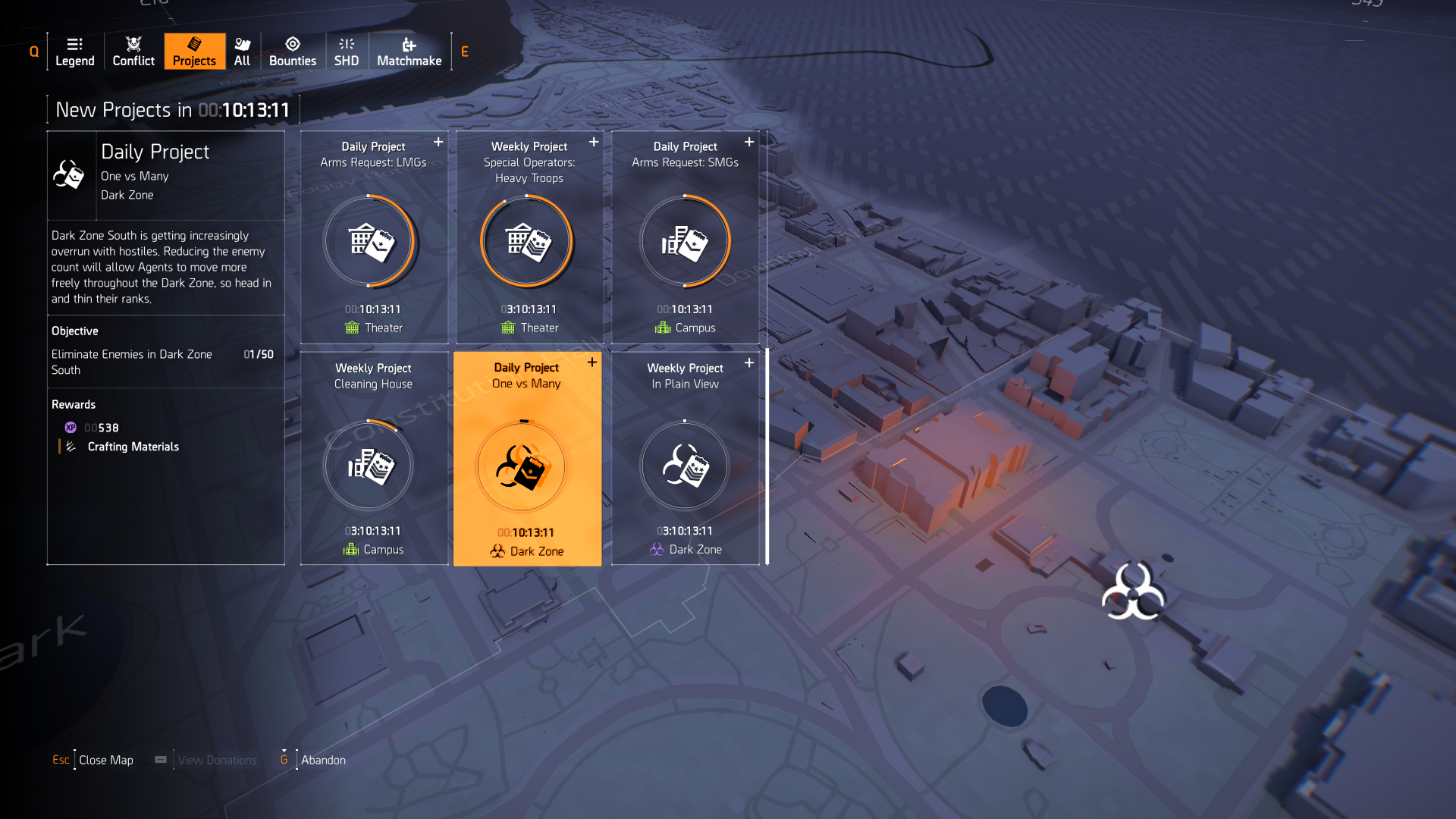 For more information on PvP within The Division 2, be sure to visit our Wiki here!