Nowhere Prophet, the new card-based rogue-like RPG from Sharkbomb Games, can appear daunting from the outside. When you start your first trek to the infamous Crypt, you could be overwhelmed with all the information being thrown at you all at once. The in-game tutorial does an OK job at harnessing it all, but a little help is always useful. That's where we - and specifically, the following beginners guide - come in. Hopefully by the end of the reading, you'll have more than enough information to navigate the dangers of Soma. 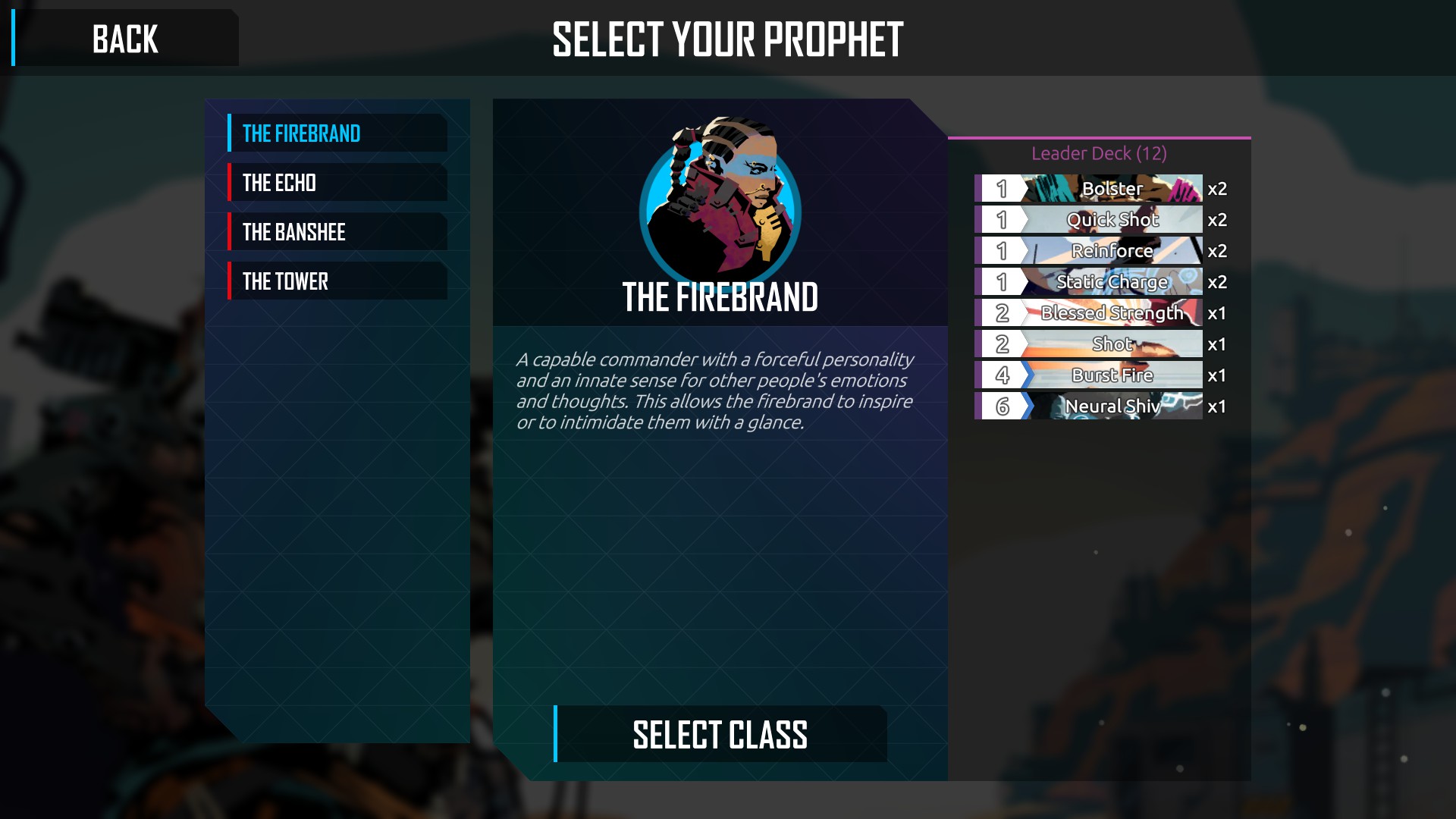 For all intents and purposes, the Prophet is you! As the fearless leader of a band of survivors, your convoy entrusts their very lives with you and your quest to the Crypt. Should something happen to you (like your HP falling to zero in battle) then the game is over, and your convoy disbands.

When starting a game, you can take up the mantle of one of four different classes of Prophets, each with their own specific strengths and weaknesses. The differences largely come from your Leader Deck, which will change dramatically based on your class.

Prophets can gain experience points and level up. When you do, you can choose a card from a random assortment of five to add to this Leader Deck. You also get a focus point, which will allow you remove a card from your leader deck that you might not want.

Prophets can also equip items and weapons. Each modifies your battles either passively or grants you a new active skill. You can also dismantle these objects to add a card to your Leader Deck, or sell them off for batteries, the currency of Nowhere Prophet. As Prophets are the lifeblood of the game, they are also far-reaching and super decisive factors on how your battles play out. Customize your Prophet wisely. 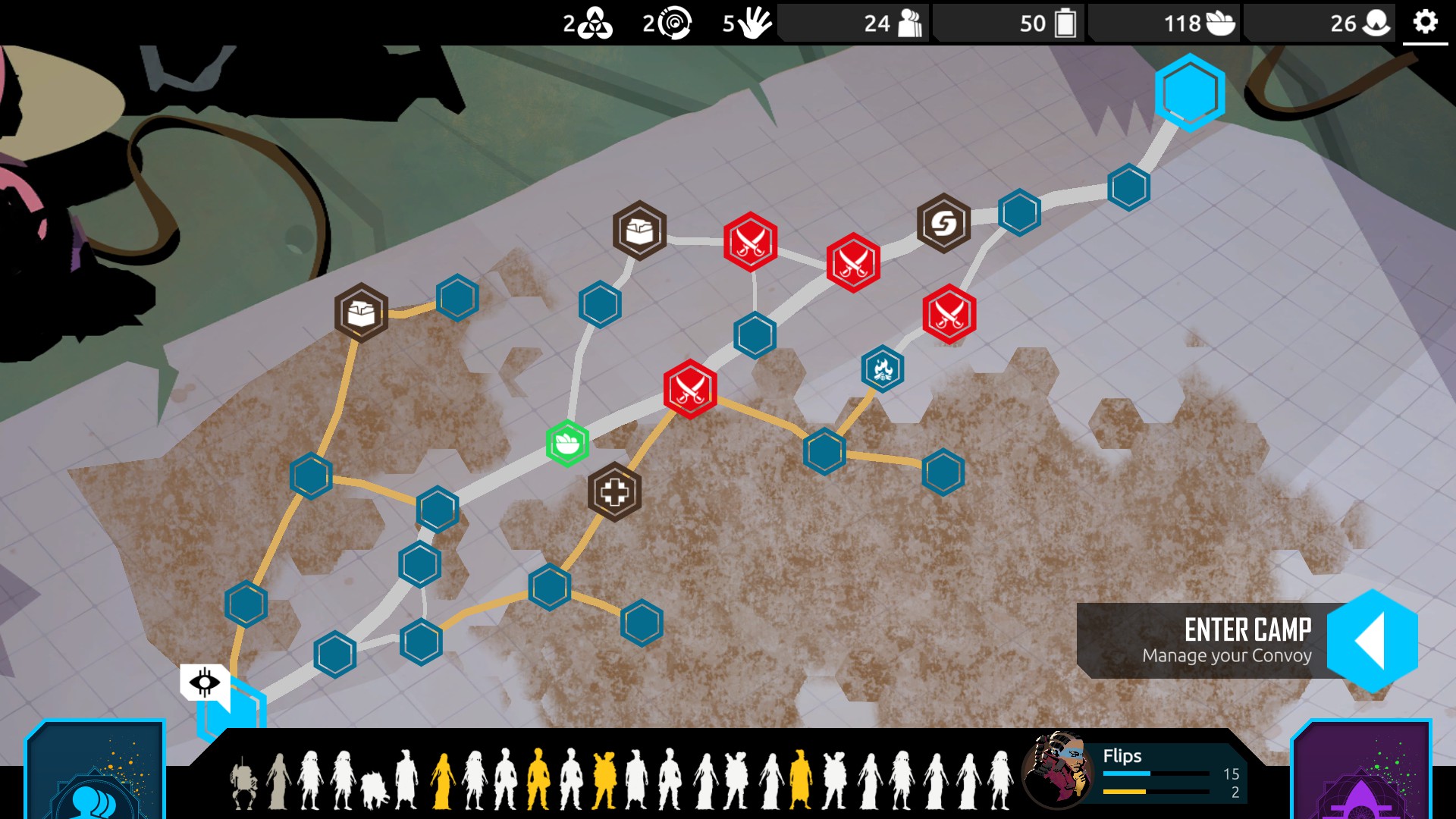 Your macro journey to the Crypt takes place on the overworld map. This map is a network of paths connected by nodes that will hold a bevy of different types of encounters. These can come in many forms:

Moving from node to node costs food and hope. You can usually buy or find food during events, but hope can be a bit more difficult to come by. Either way, planning your routes based on the cost of travel is super important. Also important is remembering that travelling on a road itself could place you in an encounter before you even get to a node. Stay sharp out there. 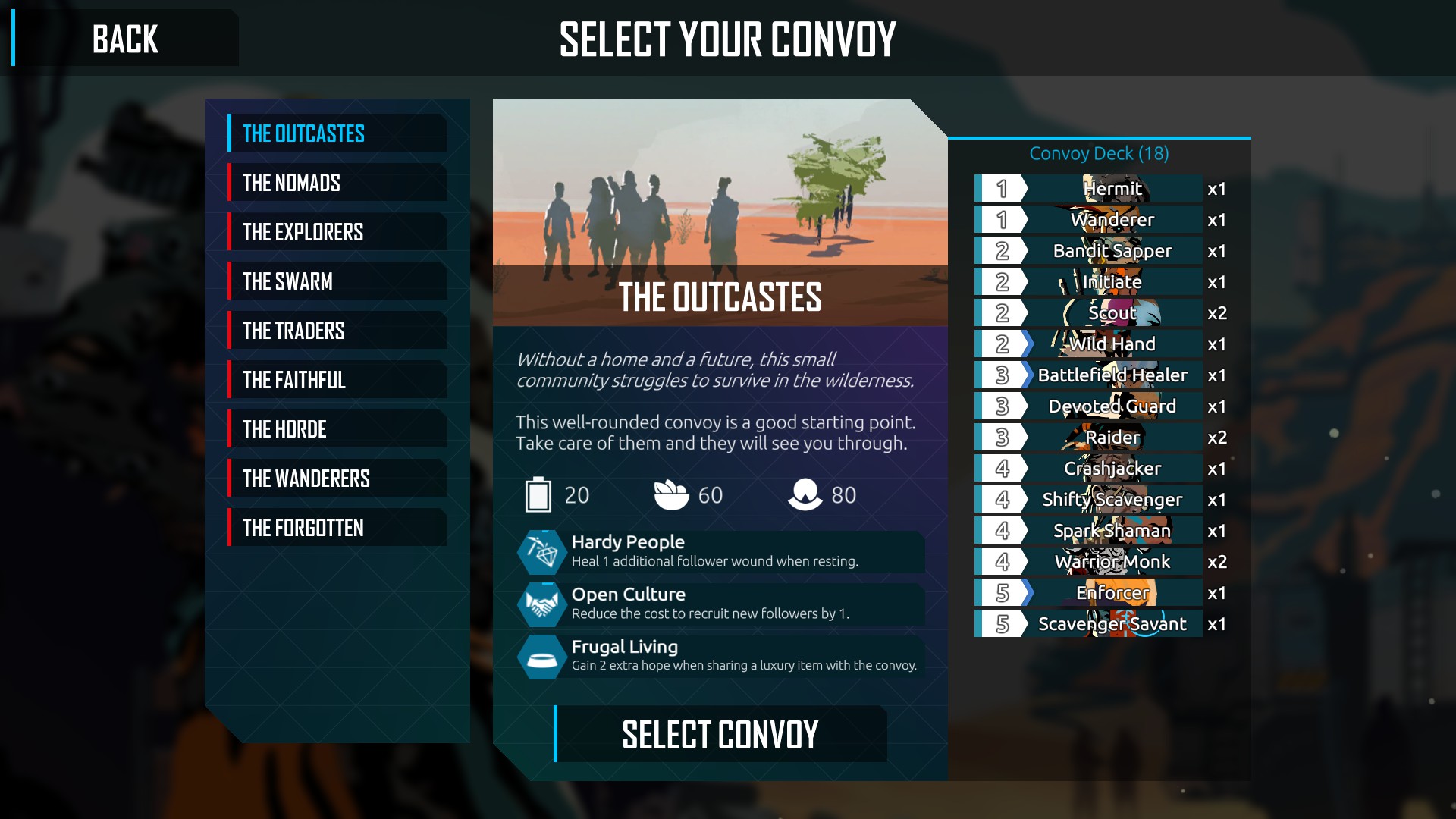 The body of your convoy are the followers. Each of your followers is a card in your Convoy Deck. You can place and remove Convoy members from the active deck at any time, and you can only have a Convoy Deck size of 30 maximum. Convoy members in the deck are at risk of injury and death via battle, while those outside of the deck are more at risk of harm from events on the road.

Followers come in different rarities denoted by colors behind their portraits: Common (White), Rare (Blue), Legendary (Purple) and Mythic (Gold). It's good practice to assume that the rarer the card, the better. They often have better states, and more exotic special abilities, so be sure to keep them safe.

Safe from what, you say? Wounds, for starters. If you lose a card in combat, it becomes wounded. Wounded cards start battle with one damage, but are also one cheaper to play. If they get got in combat again, though, they are dead. Dead cards get a big white skull on them in the Convoy menu and are removed from the list. Cards can also be wounded and killed through events outside of combat, so be careful.

When individual cards make the finishing blow on an enemy, they become Blessed. Blessed cards get a buff to their attack which stays with them until they are wounded.

Individual convoy members can be useful outside of combat as well. Many of them can be relied on in specific moments to offer an option you wouldn't have with out them. For example, some beast creatures can be used to intimidate would-be bandits. Some convoy members may be particularly good at gathering food from the wild. It's up to you to measure their risk of using their strengths to your advantage versus potentially putting them and the rest of your followers in harm's way. 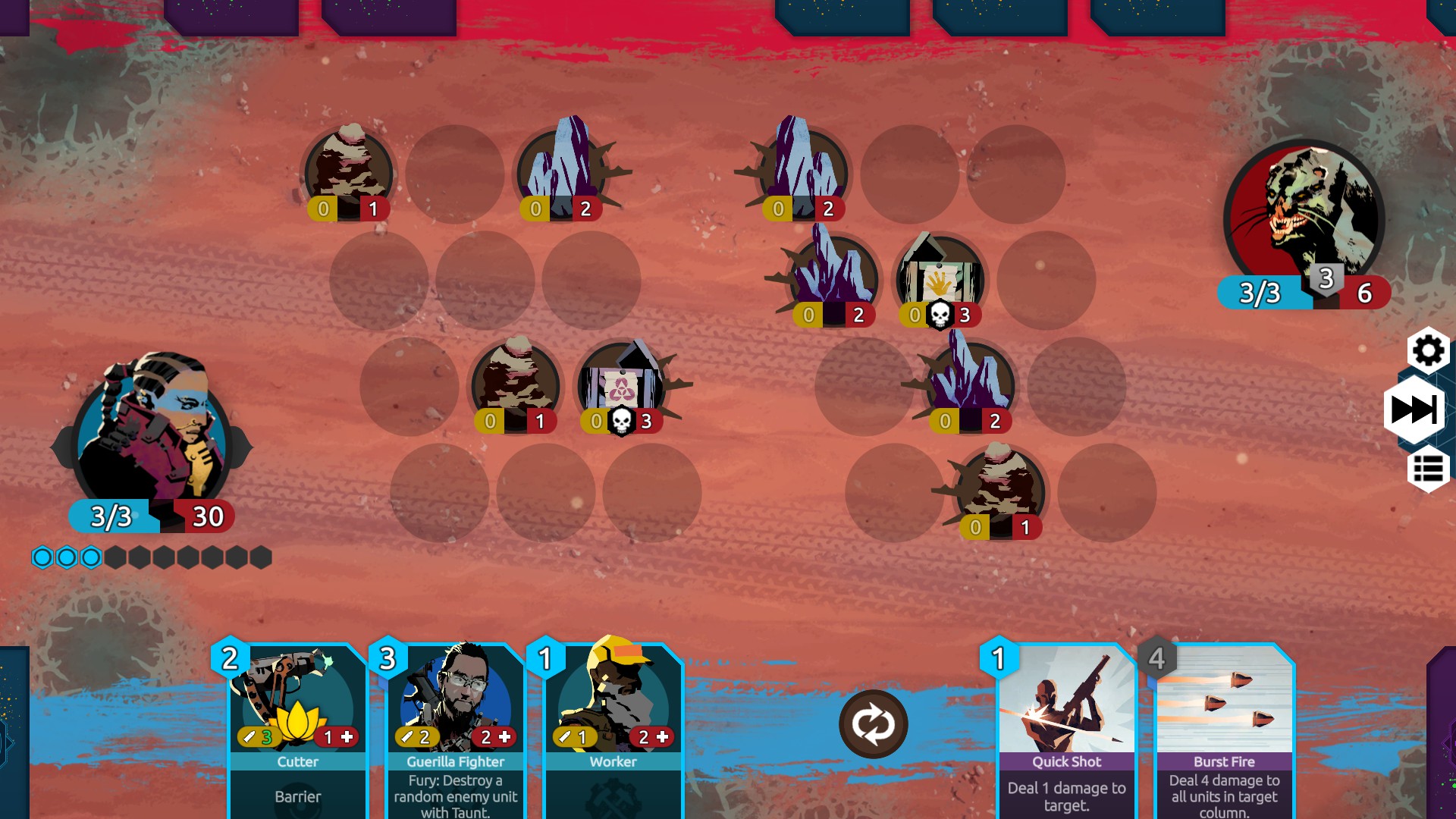 Combat is inevitable in Nowhere Prophet. It can also get pretty complex for a card game. There's some standard information you should definitely know before getting into the thick of it, though.

You start with two decks: your Convoy Deck and your Leader Deck. Convoy Decks contain your followers, which you'll play like creatures in any card game. Your Leader Deck contains cards that buff, directly damage, or otherwise alter the state of play on the battlefield. You get three Convoy cards and two Leader cards to start, and draw one from each deck every subsequent turn.

The battlefield itself is a grid of rows and columns with individual spots of your cards and units to occupy. Followers on the field can attack (if they're in the front of their specific row) either individual enemy followers, or the enemy leader directly. Keep in mind that the whole objective in the fight is to bring the leader's life to zero.

Of course, things are never that simple. Other than followers, constructs can be build and placed on the map to provide some extra flair to fights. They can't move or attack like followers, but they often provide steady boons to allies or debuffs and damage to enemies. Obstacles like boulders and trees can also pop up on a map, which can often be used as cover or some other sort of annoyance for attackers and defenders alike. Most obstacles a can be destroyed, and some even have special effects for doing so, like granting the attacker batteries and food, or exploding and hurting followers in surrounding positions.

Individual cards can be modified in numerous ways by the many keywords and effects they can have. Outside of special text effects, all of a cards unique effects tend to fall under three types of keywords: 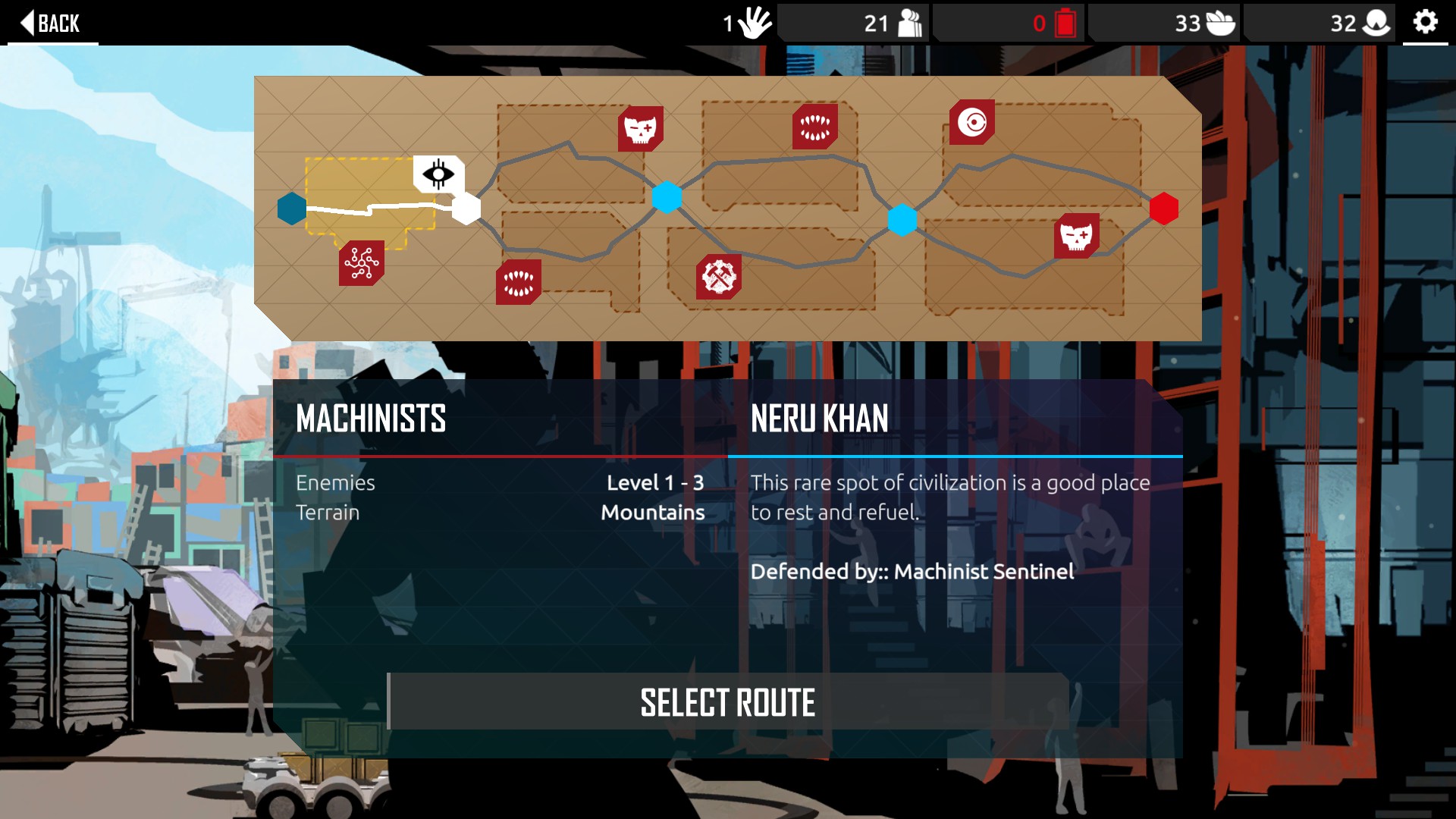 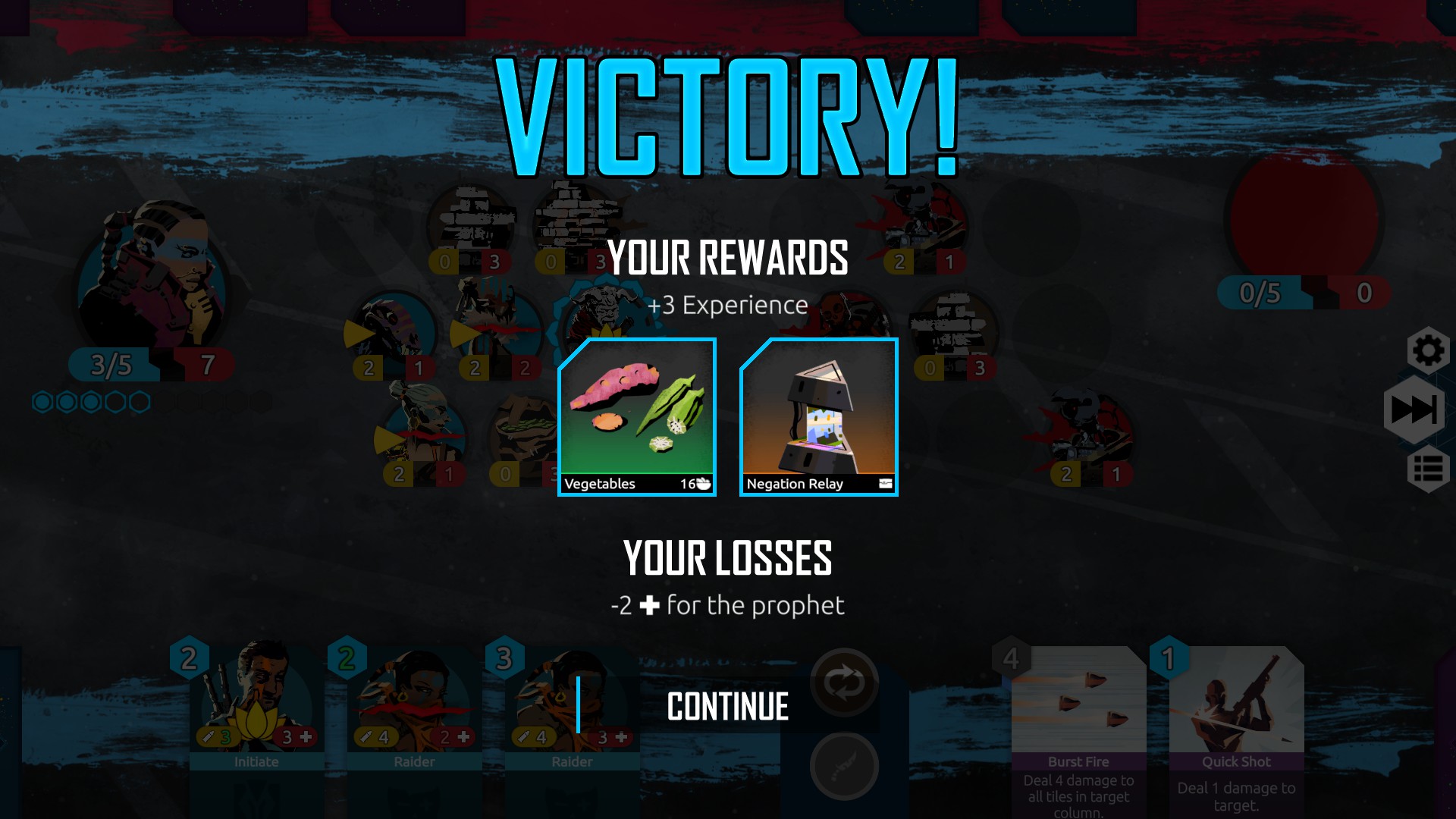 The above should get your pilgrimage started right. If you need more guidance to get to the Crypt, come to our Nowhere Prophet Wiki!