UnderMine is a deceptively difficult action-adventure rogue-like RPG being developed by Thorium and published by Fandom. In UnderMine, players will face several difficult bosses that will test the skill and determination of those looking to reach the game's end! With this boss guide, you will be prepared to defeat each boss that currently exists within the Early Access version of the game.

The Rockpile Mimic is the first boss that players will face in UnderMine. Located on the third floor of The Mines, the Rockpile Mimic's boss room looks like any ordinary room in the Mines biome, with a lone boulder that appears to contain gold. Players who attempt to collect the gold may be surprised to find that the boulder is the Rockpile Mimic and attacking the boulder will begin the fight. Unfortunately, there is no way to avoid this boss, and entering into the room will cause all of the doors to close behind you.

To defeat the Rockpile Mimic, players must dodge its two main attacks. The first is a series of slam attacks that will launch a single wave outwards towards the player. This attack is easily dodged by staying at ranged distance while simultaneously moving around and using the throw attack to damage the boss. It's also possible to use the swing attack against him during this attack sequence, but players will need to time their jumps accordingly to dodge each attack.

The second main attack from the Rockpile Mimic is when he turns into a ball and rolls around the room. This can be easily dodged by using the jump action when he gets close and moving to the opposite side of the room. There are moments during this roll where the boss can bounce off the wall and change direction, so players must be aware of their positioning in case this occurs. Mastering the dodging of these two attacks while also managing to deal damage to the boss will ensure that the Rockpile Mimic stands no chance! 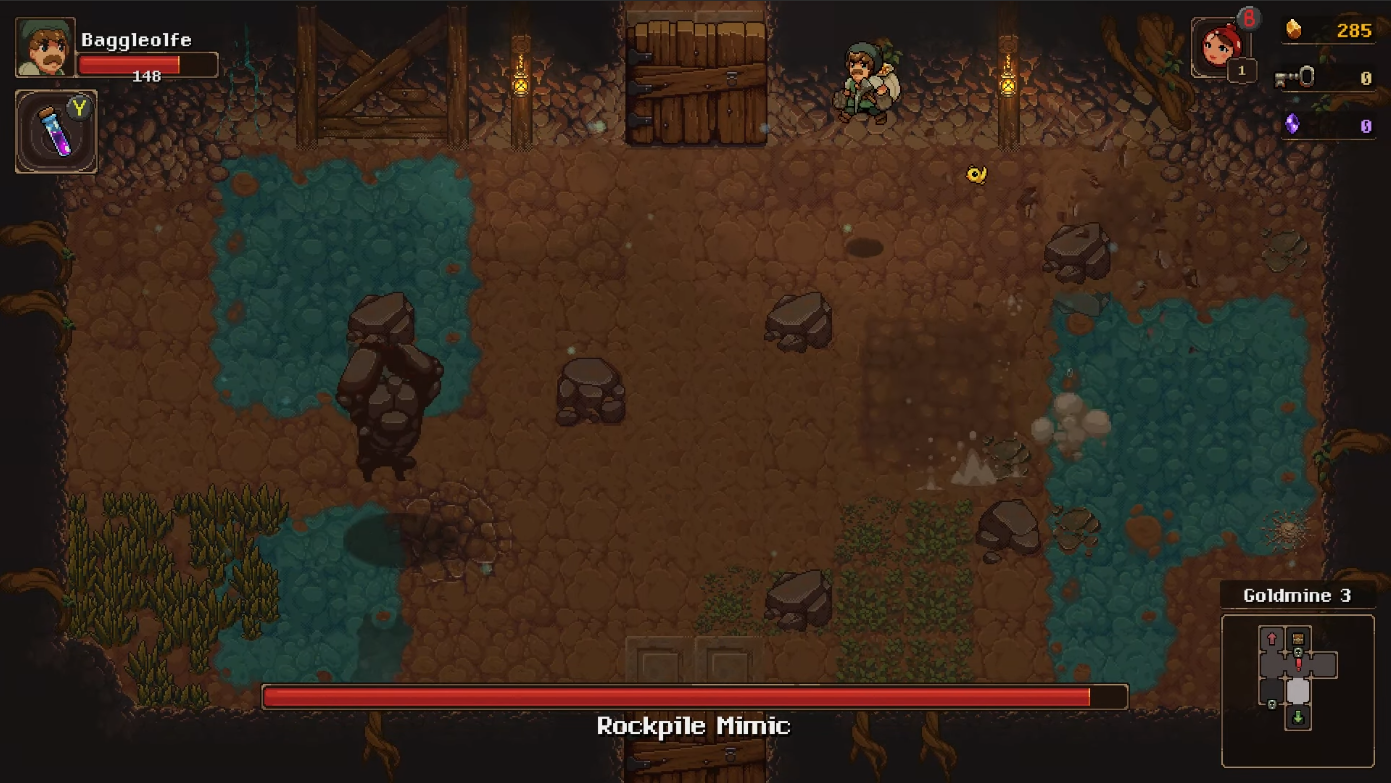 Selt, Lord of Sand, is the first of two bosses that can be skipped in favor of delving deeper into the UnderMine. This boss can be found on the fourth floor of The Mines, and the entrance to the boss room is a rather ominous hole in the ground with several signs warning players of the danger ahead. Located on the same floor as this boss is the entrance to The Dungeon, and while players may conclude that in order to enter the dungeon you must first defeat the boss, it's possible to gain entrance to The Dungeon by simply killing the two guards just outside of its door! Doing so will allow players to venture deeper and collect more gold for permanent upgrades back in town which should provide the strength to kill Selt, Lord of Sand, once they feel ready.

Selt has several attacks to be aware of, but a constant danger throughout the fight is the spawning of small larva which will fire projectiles at the player. Players will become webbed and rooted in place for a couple seconds if they are hit by these projectiles. The best way to reduce the number of these larva in the fight is to kill their eggs before they have the opportunity to hatch. Relics that provide an area-of-effect damage bonus, such as Bottled Lightning or Guidance, will help with clearing any additional larva that spawn during the encounter.

Damaging Selt must be done by attacking his tail. Coming into contact with this large boss will deal damage to the player; therefore, positioning is critical to reducing damage taken during the fight. On specific intervals, Selt will coil up and spin while releasing large rock waves outwards. Players must avoid these by either standing between the waves or using the jump action to dodge them. Standing further away from Selt during this will also make it significantly easier to dodge the waves.

After spinning around, Selt will charge from one side of the room to the other, and it's possible to get some free attacks on his tail while he readies this attack. After charging, Selt will dive into the ground while placing a circle marker around the player. After a few seconds, Selt will emerge under the player and charge towards the player, knocking them into the air while also placing a rock-wall around the player--making it impossible to simply run away from this attack. To avoid this damage, players must use their jump at the last second, just as Selt is about to reach them!

Defeating Selt, Lord of Sand will reward players with oodles of gold and crafting recipes which can aid the player in future adventures into the UnderMine! Player's will also receive the key to The Dungeon if they didn't already get it by killing the guards. 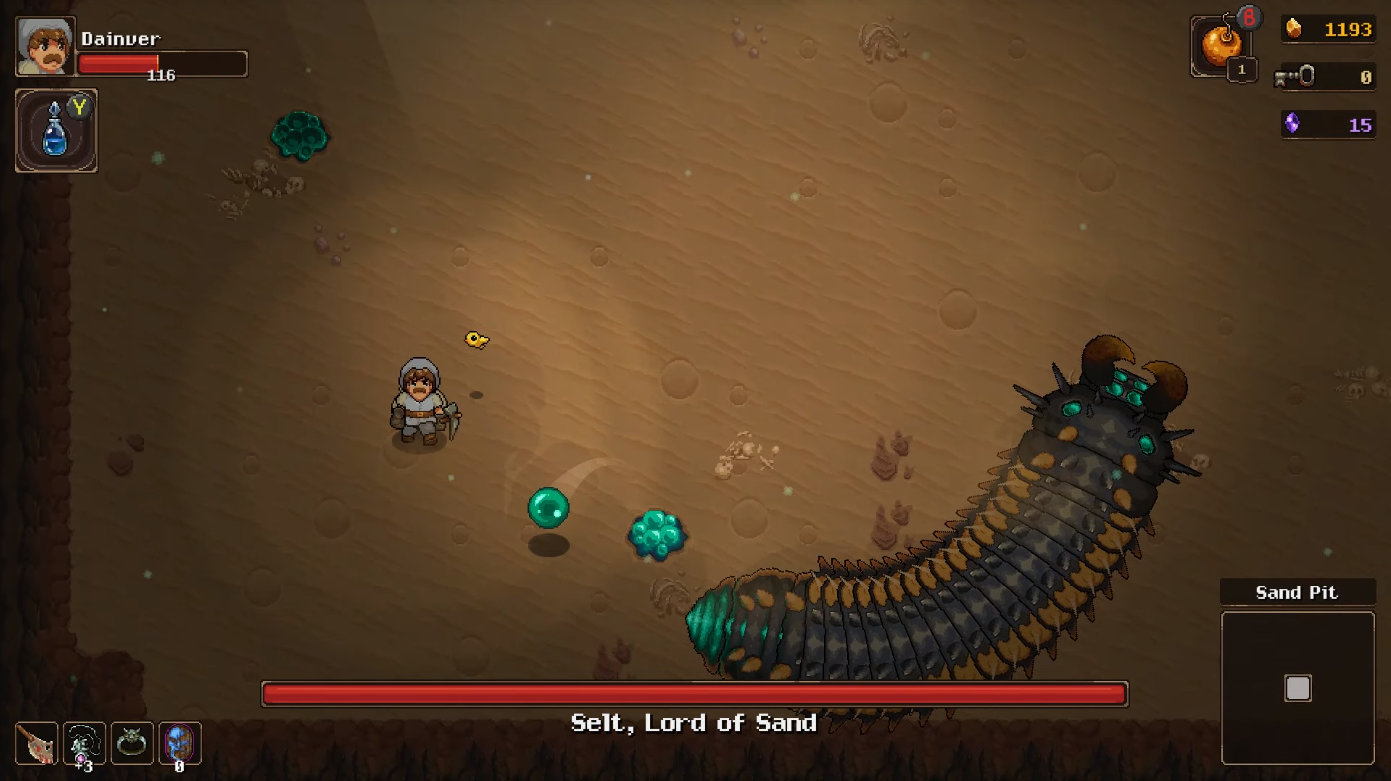 Mortar, Charged Golem, is the second of the two optional bosses in UnderMine and can be found on the fourth floor of The Dungeon. Like Selt, the entrance to Mortar's room is rather obvious, and entering his boss room will begin the encounter. Also on the fourth floor of The Dungeon will be the entrance to The Halls, and players who have not gathered the key to The Halls by defeating Mortar can choose to accept several curses upon them to gain entry to the next biome; however, this will need to be done each time they wish to enter The Halls without the key--unlike The Dungeon guards which will remain defeated.

Mortar, Charged Golem, has various parts of him that players must kill if they wish to defeat him. First, Mortar has two large stone arms which will fly around and smash the ground near the player at regular intervals. Once they hit the ground, it's possible for players to damage these arms before they fly up into the sky once again. Killing an arm will remove it from the fight, and killing both arms will remove this attack entirely.

Mortar also has several floating lighting orbs around him, making it difficult to attack the boss directly without first being hit by these orbs. Mortar will use these orbs in a series of attacks against the player after having used his arm smash. First, the orbs will spread out within the room, landing on the ground and electrifying any water they are touching. At the same time, a large laser beam will start at one end of the room and move to the other side rapidly, which can be avoided by using the jump action. Thankfully, these orbs can be attacked, and killing them one at a time will reduce the potency of these attacks.

Once the arms and orbs are dead, players can freely attack Mortar with little to no danger, and defeating Mortar will provide a massive amount of gold along with several blueprints and the key to The Halls! 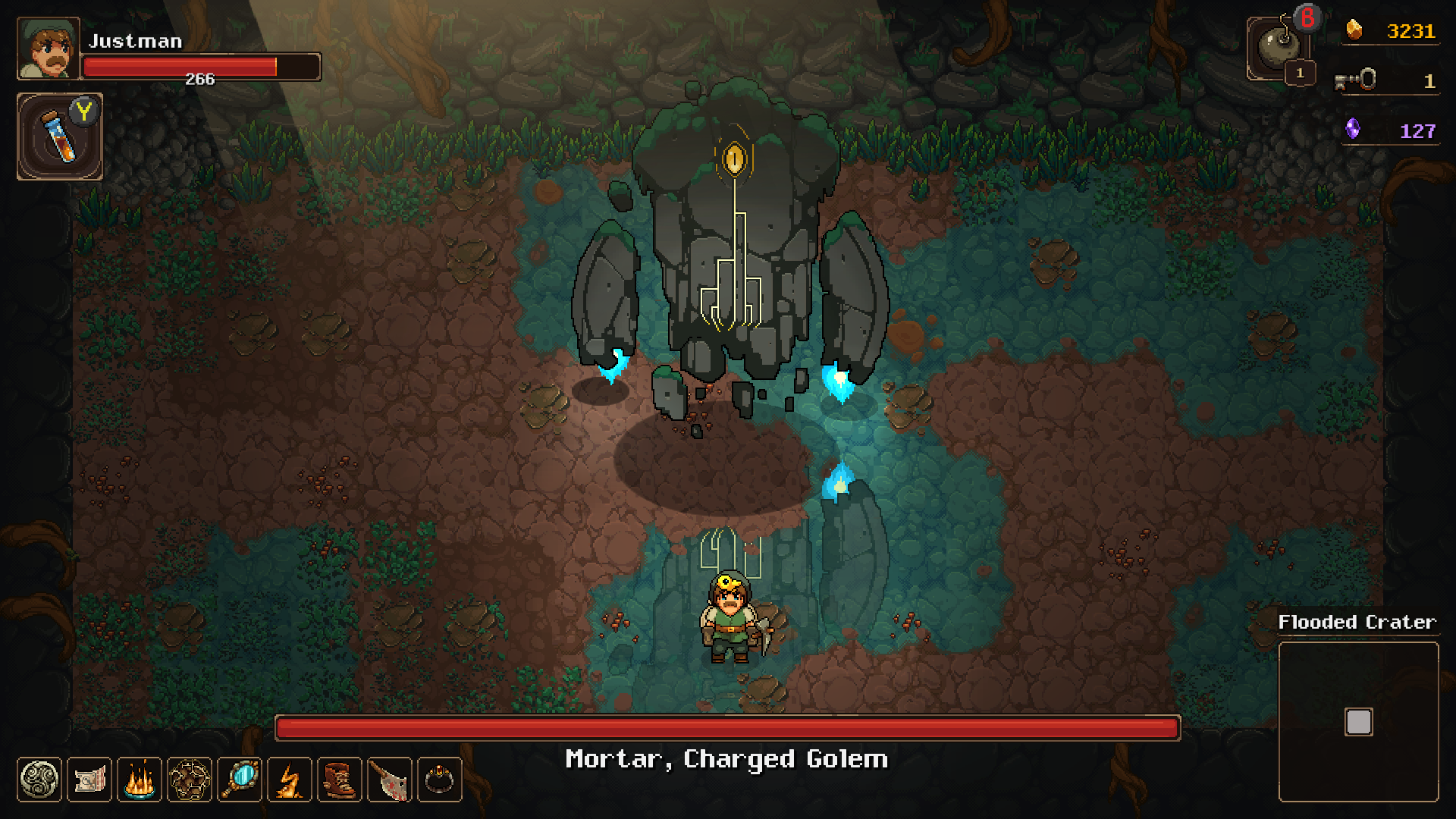 Noori, Spectre of Darkness, is the final boss of the game as it currently stands in Early Access. Noori can be found on the fourth floor of The Halls, and is a very difficult boss fight that will require players to have acquired several upgrades to their damage and health before they can expect to defeat him. To make the fight easier, players should adventure through the entirety of each previous biome, collecting relics and blessings before finally reaching Noori.

Noori, Spectre of Darkness, has only a few attacks to be aware of, but they can be unforgiving to any player who has not spent time practicing the fight. First, Noori will open shadow rifts near the player. Spooky arms will protrude from the rifts moments after they open, dealing massive damage to nearby players. The time between the rift opening and the arms attack increases as the fight continues, and it will be vital for players to utilize their jump to avoid any damage from these at the end of the fight.

Noori will also spawn two large purple orbs that will slowly float towards the player. These are readily dodged by simply running away from them until they disappear, but this attack can happen while rifts are opening around the room, causing players to dodge multiple attacks while also avoiding the purple orbs.

Finally, Noori will float to one side of the room and launch a wave of purple orbs outwards towards the player. These can be easily dodged by simply standing on the other side of the room and looking for openings between the orbs, but waiting to long to avoid this attack will result in rifts opening once again. Individually, Noori's attacks are fairly simple to avoid, but the difficulty of this fight comes once different attack timings are overlapping.

Players who are able to avoid unnecessary damage during this fight will emerge victorious, and will be presented with the end room where a moth named Death's Head will inform players that this is the end of the current available content within Early Access. Players will also get a Summoning Stone which resurrects all bosses and imbues them with greater power, making them more difficult and providing players with new content to play through! 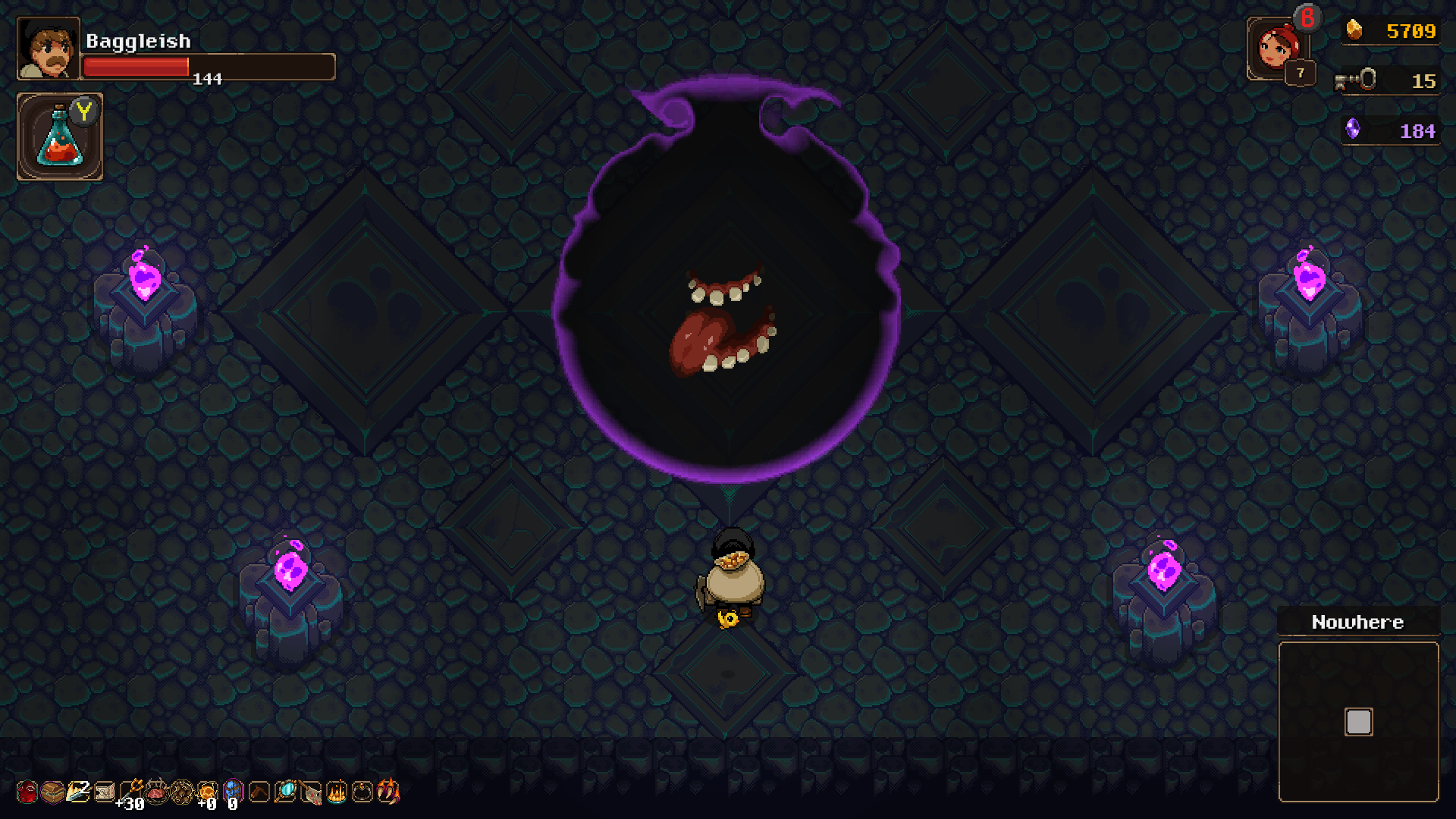 UnderMine is available now in Steam Early Access. For more information on the game, be sure to visit our official Wiki here!