This year marks the 10-year anniversary of the beloved fantasy themed puzzle-platforming Trine franchise, and what better way to celebrate than with the release of Trine 4? Developer Frozenbyte is returning the series to its roots after 2015's Trine 3, a game that didn't quite capture the magic of previous entries in the franchise, in part due to the game's shift to 3D environments for the first time and a story that ended on an unexpected cliffhanger.

Thankfully, Trine 4 looks to be a dream come true for fans and is shaping up to be the most ambitious, visually impressive, and complex adventure in the series yet. Frozenbyte marketing manager Kai Tuovinen recently took the time to answer some questions on what both new players and franchise fans can expect when Trine 4 releases on October 3, and how lessons learned during the development of Trine 3 affected the game's development. 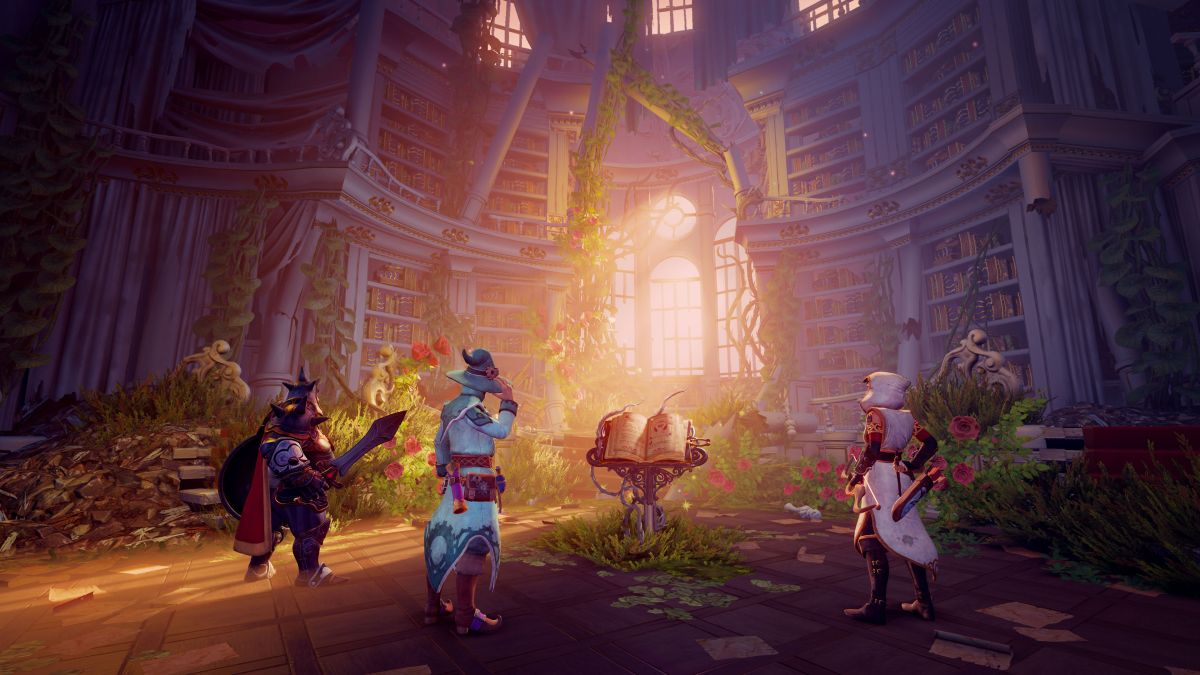 Q: Trine 4 returns the franchise to 2D after going 3D for Trine 3. What about returning to 2D (or rather 2.5D) appealed to the team?

Kai: Looking back at the three previous games, we thought that the defining skills of the three characters and puzzle designs were much more suited for sidescrolling gameplay than 3D. So we felt that 2.5D was where Trine belongs. “Please return to 2D” was also something we kept hearing from fans of the series so it made the most sense from that side as well. We wanted to do more 2D as it also allowed us to fully flesh out a complete story and create a lot of cutscenes and other narrative elements that really bring the game to life!

Q: It’s been several years since Trine 3 released, with numerous other 2D puzzle-platformers having been released between then and now. What new puzzle mechanics are coming to Trine 4 that the series hasn’t seen before, and what were some of the inspirations behind those mechanics?

Kai: We’ve added additional puzzle elements such as electricity and magnets, along with several new skills and abilities for all the three heroes, such as the Iron Ball for Amadeus, Fairy Rope for Zoya and the Dream Shield for Pontius. For Trine 4 we’ve made more puzzles that require specific abilities to be solved, and while all puzzles have multiple solutions, we’ve reduced the amount of “brute-forcing” puzzles overall.

Familiar abilities have new uses, take for example the Thief’s rope and ice arrows. You can now create a rope bridge by combining it between two points, and the ice arrows can be used in puzzle solving as they freeze dynamic platforms and objects in place, so they’re not just a combat ability any more.

Besides lots of new abilities and puzzle elements, we’ve also designed separate puzzles for multiplayer. By playing the game in the Unlimited Mode (where you can play as any combo of the three heroes, so e.g. 4 wizards etc.), you’ll have variations of the puzzles you saw in single player, and they’ll be harder to solve and at times impossible to do solo. That’s something completely new to a Trine game and a feature we’ve been very happy with, as it adds a lot of replay value.

Q: Are there any lessons from the development of Trine 3 (aside from the shift from 3D back to 2D) that have been applied to Trine 4?

Kai: The biggest thing is to finish a game completely and not leave the story in a cliffhanger ending. We’ve done that in Trine 4, as the game is the longest ever in the Trine series, there’s a lot of cutscenes that move the story along throughout the game, and a there are lots of friendly creatures in the levels that have been impacted by the overarching storyline, namely the Nightmare Prince’s shadows. Everything’s connected!

The skill trees and upgrades are back, [with] lots of abilities to unlock. Those were sorely missed in Trine 3, and we felt they were an integral part of the experience. You can do a lot more with puzzle and level designs when the amount of abilities you have grows over the course of the game. 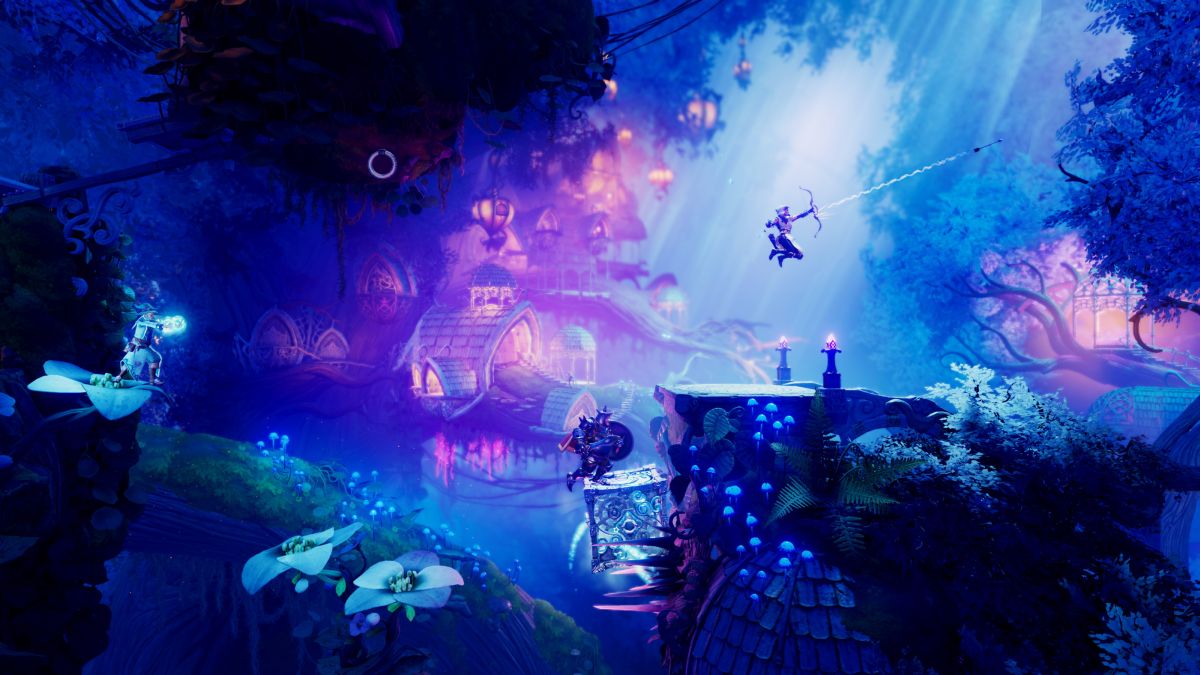 Q: Do the game’s three characters mostly maintain their abilities from previous entries? How does upgrading their various abilities work?

Kai: The defining skills are there, you have the box magic and levitation for Amdeus, Sword and shield for Pontius, Rope and Bow & Arrows for Zoya. We’ve got two types of experience in Trine 4 that you gather. The stuff you collect from fights unlock core abilities that you’ll need for puzzle solving and progression, and the vials you can find scattered in the levels, hidden even, allows you to upgrade more voluntary and fun abilities, especially useful in fights. An example would be the Wizard’s horizontal throw that makes him a formidable force in combat!

Q: In previous entries, combat typically revolved around the knight character Pontius. How has combat evolved for Trine 4?

Kai: We’ve revamped the combat system by making it event-based, where the nightmare creatures, along with additional platforms, appear. The platforms make the fights more vertical, thus making the two characters with longer range more useful, and we’ve added abilities such as the Blink for the Wizard and Dodge for the Thief that make those two more elusive. Both also receive several combat-oriented abilities that make them more effective and FUN in fights! We felt that there was an imbalance between the popularity of the three heroes when it came to fights and set out to correct that in Trine 4.

Q: Trine 4 includes four-player co-op in which each player can swap between the game’s three characters and where puzzles are tailored based on the number of players. How does that process work, and was it a challenge to develop puzzles based on different number of players?

Kai: Each puzzle takes a lot of work to make it to the final game, and undergoes many rounds of testing, so it’s been a lot of work to redo those puzzles and make them work specifically for multiple players. There’s a lot of balancing required — difficult or impossible to do solo, but not too complex so we don’t frustrate people working together either. There always needs to be multiple solutions to each puzzle, so it was certainly a challenge, but the core gameplay designers have been on this ride since the original Trine, so they’ve got 10 years of Trine puzzles under their belts. I think we pulled it off great and the multiplayer puzzles are one of our favorite things with Trine 4! 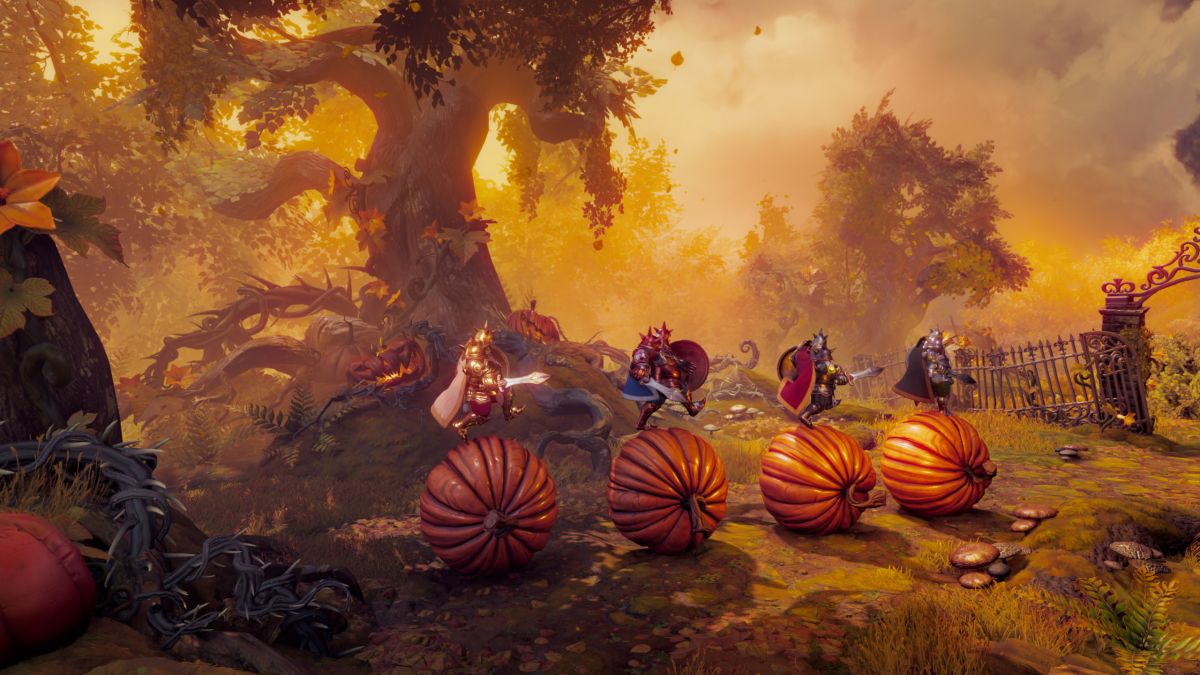 Q: Visually, Trine 4 looks to be the best the series has ever been. How is the team pushing the game’s visuals further than previous entries, and what can we expect performance to be like across the various platforms the game is releasing on?

Kai: Thank you! Our art team has been hard at work and this will be the first game we release on our brand new engine. There’s lots of new rendering features like PBR [Physically-Based Rendering) as well as better effects tools for the artists to use, so we’re really proud of the look we’ve achieved. The game looks and plays great on all platforms, for consoles we’ve got 1080p/60fps on PS4 and Xbox, and 1080p/720p/30fps on Switch (docked, handheld). For PC, the performance depends on your rig.

Q: Over the past year, the three previous games have all been rereleased on Nintendo Switch. What are your thoughts on the platform and what makes it a good fit for the Trine franchise?

Kai: The portability of Switch makes it stand out from the other consoles, it’s a very good concept that combines the comfort of play-at-home on your TV with the ability to continue playing on the go with great console-quality controllers and screen. Trine is a very co-op driven game series with support for both local and online play. Switch is amazing at shared experiences, with so many different ways to play, so the two are a natural fit!

Q: Are there any plans for DLC or other forms of post-launch support?

Kai: We’ve made it a habit to continue supporting our games with more content after launch, so we’ll probably do something down the line, but nothing that I can share plans of at this point. For example Has-Been Heroes and Nine Parchments both got big content updates post-release. We’ll see.

Q: If a player has never played a Trine game before, what makes Trine 4 a great jumping in point for the franchise?

Kai: We wanted to make sure that existing fans and new players could enjoy the experience, so Trine 4 has a standalone story that doesn’t require you to know what’s happened in the past for you to enjoy it. The three characters are introduced, and in a lot of ways explained and familiarized even better than in the previous Trine games. Trine 4 is a very good way to jump into the franchise!

For long-time fans, there are of course nuances and jokes you might find extra funny given the history, e.g. the Knight’s love of food and potatoes is referenced quite a lot, so for anyone who's played the previous games, Trine 4 feels like a welcome return home.

Trine 4 releases on PC, PlayStation 4, Xbox One, and Nintendo Switch on October 8th. Be sure to visit the Official Trine Wiki for even more information on Frozenbyte's latest.