The Outer Worlds is an incredibly enjoyable single-player RPG with fantastic writing and satisfying gameplay. There are so many choices regarding your character progression that things can get a little overwhelming at times, but our beginner's guide will set you on the path to success! These tips are things we wish that we knew before getting started in The Outer Worlds, but come from having put significant time into the game. Additionally, we've done our best to keep this guide as spoiler free as possible. 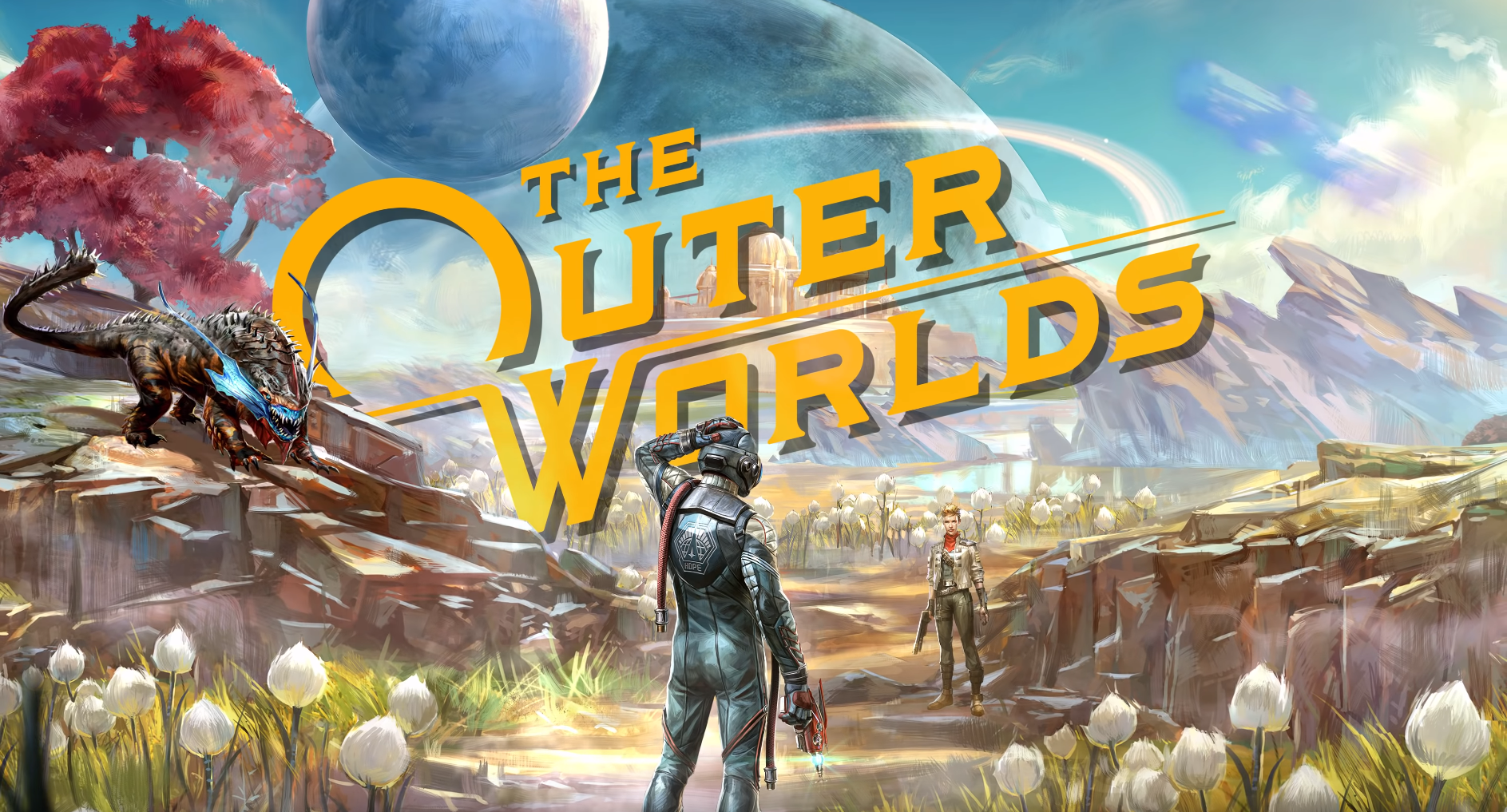 The Outer Worlds has four difficulty settings: Story, Normal, Hard, and Supernova. From Story up to Hard, the only thing that changes is enemy health and damage. Supernova, on the other hand, acts more like a survival mode requiring you to eat, drink, and sleep to survive. Another caveat for Supernova, is that when companions die, they are permanently gone, and that you can only manually save while inside your ship. Due to the game becoming progressively easier as you level up, we suggest playing on Hard difficulty for the majority of the game. With the exclusion of the first couple levels, Hard difficulty feels more like what you would expect from Normal in similar games.

It's worth noting that you can change your difficulty setting at any time, so feel free to adjust the difficulty if you feel things getting too easy or hard; however, the difficulty cannot be changed while playing on Supernova. Additionally, we believe that Supernova should be reserved for a second play-through, or for players who desire the survival game aspect. 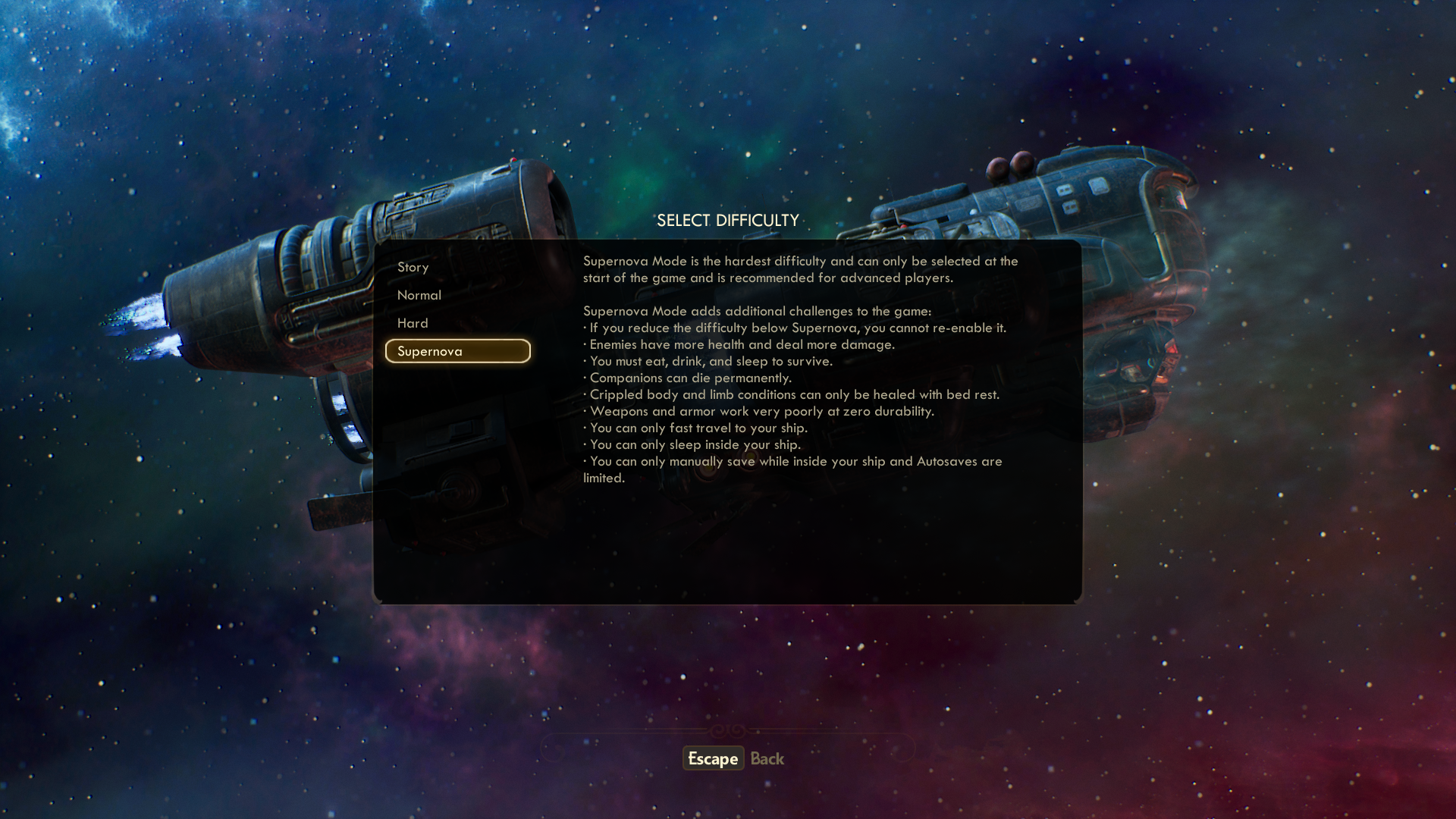 It's important to know that you can refund all of your Skill and Perk points at any time on your ship at the cost of bits. To do so, visit the Vocational Competence Respecification Machine on your ship. You can find it in the engineering bay on your left as you enter your ship. Go up the ladder to the second level, and you will find the respec machine to the end of the balcony that overlooks the bay. This can be incredibly useful if you find yourself not enjoying the particular play style that you've picked for yourself, and want to change to something different. 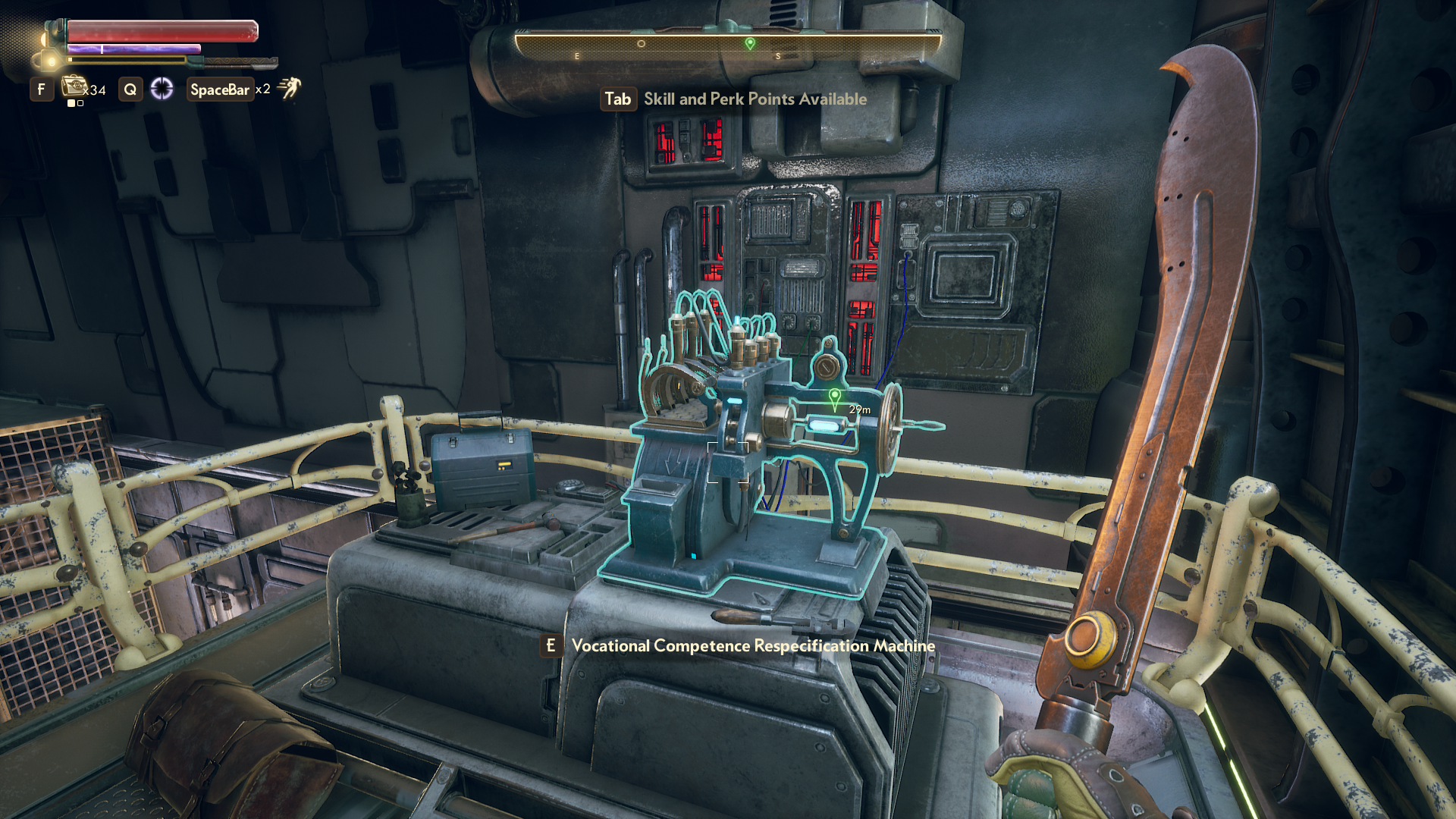 Each time you level up, you will be rewarded with 10 Skill Points to spend. Skills are broken down into several categories, and each point invested in a category will increase your rank in all of those skills until one of them reaches rank 50. For example, the Ranged category features the Handguns, Long Guns, and Heavy Weapons skills. Let's say your Handguns skill was at 45, and Long Guns & Heavy Weapons were both at 35. The next time you leveled up, you could invest 5 points into Ranged, raising your Handguns to 50, and the other two to 40. Once a skill reaches rank 50, you can no longer invest into that specific category, and instead need to individually invest points into the skills listed within that category. 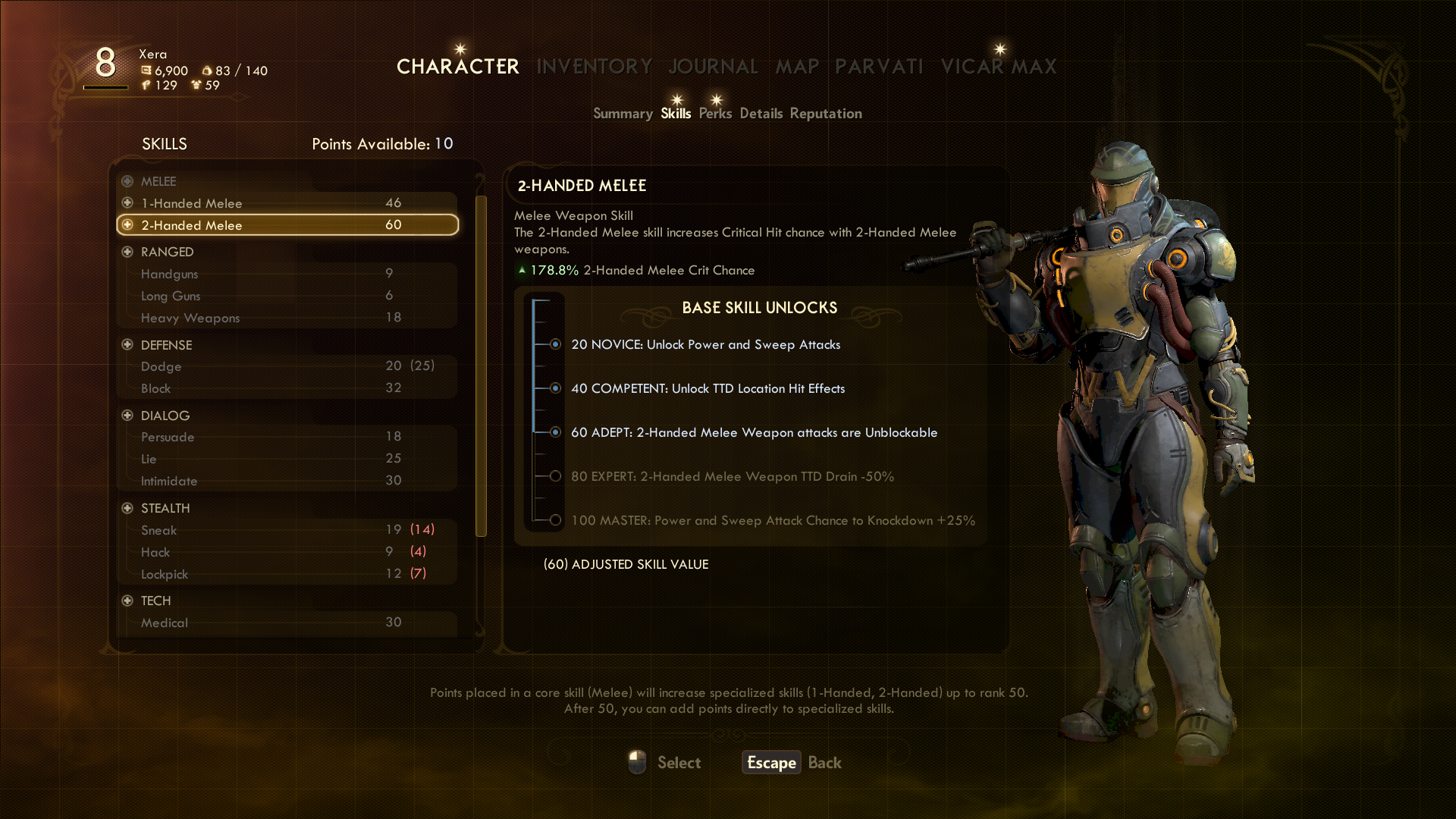 Individual Skills have Base Skill Unlocks every 20 ranks. For example, reaching rank 20 in 2-Handed Melee will unlock power and sweep attacks, but getting to rank 100 will give your power and sweep attacks an additional 25% chance to knock enemies down. Generally speaking, the greater the amount of points invested in a skill, the more powerful that particular skill will be. We've suggested some incredibly powerful skills below to help you on your journey, but feel free to experiment with different skill combinations while utilizing the respec feature mentioned earlier!

We suggest getting your Lockpick skill up to at least rank 20. Doing so will allow you to open doors and containers which only require 1 Mag-Pick for free. This will result in having more Mag-Picks to utilize throughout the game, allowing you to open far more containers than you may otherwise. If you decide to get your Lockpicking Skill to rank 60, you will then be able to see what is inside locked containers before opening them!

For players who are interested in running around with companions, then absolutely invest points into the Leadership category. Getting the Inspiration Skill to rank 20 will unlock abilities for your companions, which you can order them to perform whenever you see fit. These abilities are incredibly useful for taking out enemies, and have a relatively short cooldown as well--so don't forget to use them! Investing 20 points into Determination will unlock the ability to heal your companions when you use your companions; however, they initially only gain 30% of the healing effect.

The Engineering Skill could very easily be overlooked by many players, but it contains very powerful and convenient bonuses for players who choose to put points into it. We suggest getting at least 20 points into Engineering to unlock the Field Repair ability, which allows you to repair weapons and armor from your inventory screen instead of a workbench.

The Medical Skill is especially strong for any players who find themselves taking above average damage. Investing 20 and 40 points into this Skill will unlock the 2nd and 3rd drug mixing slot for the inhaler, providing players with the ability to gain additional customizable effects when they use the inhaler to heal!

We get it, The Outer Worlds is a sci-fi space game and space guns are super cool to use, but don't forget that space swords and axes are also super cool! In fact, melee weapons are extremely powerful in The Outer Worlds, and definitely should not be overlooked. Players who decide to go the melee route also do not need to deal with pesky ammo management, which can then be sold to give players a huge boost to their income.

To Flaw Or Not To Flaw

While playing The Outer Worlds, you may be presented with the ability to gain Perk Points at the cost of taking on a Flaw. These opportunities present themselves through basic play, but fighting a lot of one type of enemy will often trigger a Flaw associated with that enemy type. Some Flaws provide very minor downsides, and are absolutely worth picking up for the additional Perk Point; however, always be sure to read the effects before accepting the Flaw. Some Flaws can present crippling negative effects that are not worth a single Perk Point. 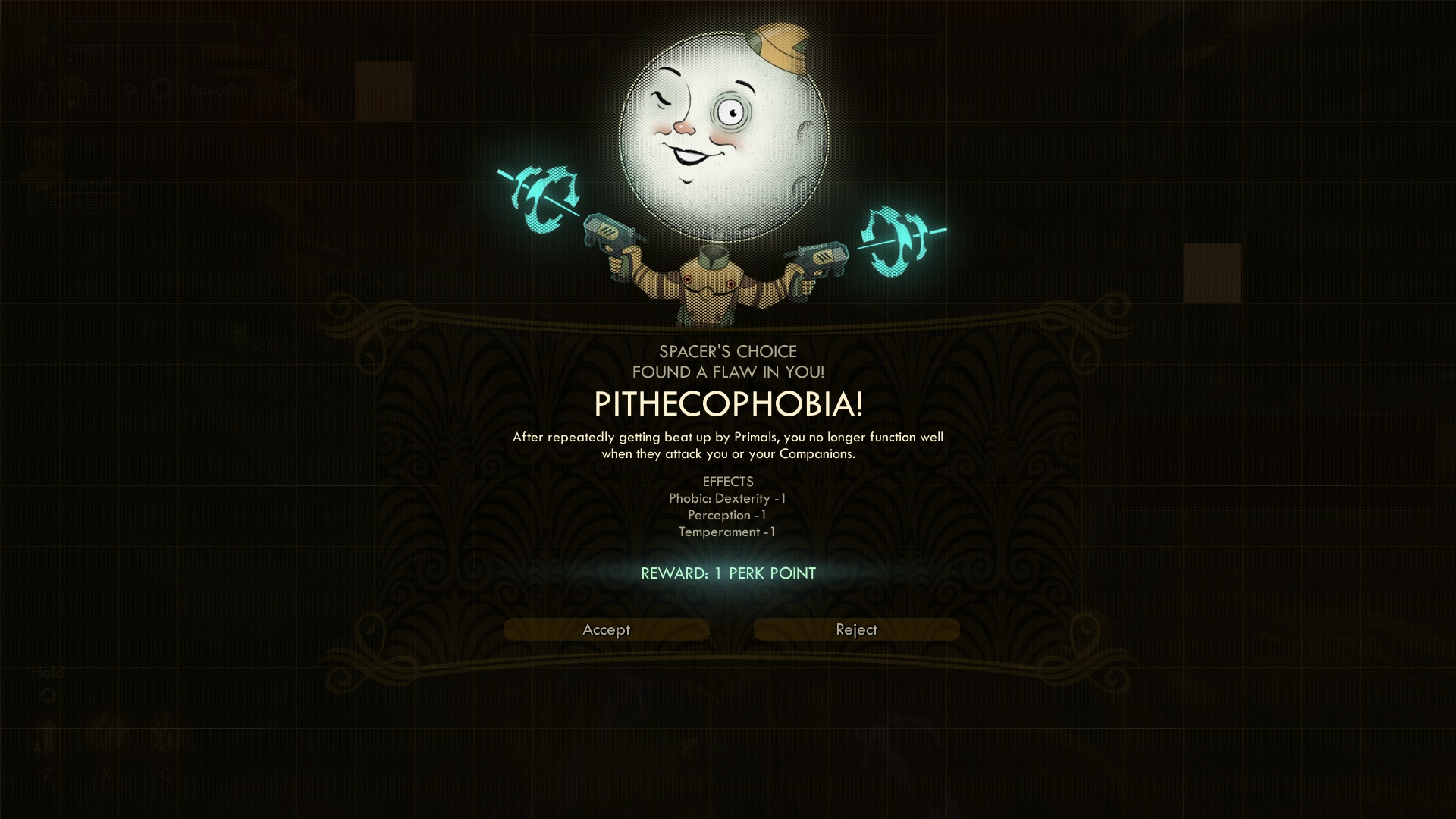 The Outer Worlds is a vast game with an unfathomable amount of player agency, so be sure to visit our wiki here for more information!

Chris is a content creator on YouTube who covers all things gaming and nerdy! He plays a large variety of games, including competitive shooters and strategy games, but specializes in role-playing games. Chris has been creating gaming content for over ten years and is an indie game developer in his spare time. He is also an avid tabletop gamer, and has a +3 bonus to devouring cereal.