Video games today come in many different genres and styles. Among the most widely popular are massively multiplayer online titles (MMOs), in which many players from all over the globe meet, compete, and play together. But what’s to be said of the humble single-player title? While most triple A’s are focusing on creating the next big MMO to rake in the profits, we still see a dedicated few staying the course. Some of them creating the most graphic and moving adventure titles I've ever had the pleasure of playing.

With standards on the rise for what smaller developers are capable of producing, it means a richer pool of high quality games, outside of the usual genres. The single-player graphic adventure is by far one of the most entertaining. From Beyond Two Souls to The Walking Dead, to newer names like Wander and Ori, graphic adventures all have two things in common: they’re both beautiful visually and captivating aesthetically.

Along with technological and graphic standards, quality of story and immersion are also on the rise. The first new age single-player game I played was Metro-Last Light, the sequel to Metro 2033. The series is based on the popular novel series by Dmitry Glukhovsky in which the fallout from nuclear warfare has forced humans to move underground in order to escape both the radiation and the hideous mutated monsters above.

Metro’s playstyle embodies several familiar aspects to get even the most mainstream gamers interested. What makes it special to me though, is the story. Dark and mysterious, there’s something about a post-apocalyptic steampunk-esque environment that gets my blood flowing. On top of the prospect of monsters appearing from seemingly nowhere, you’re on your toes at almost all times during your first playthrough. 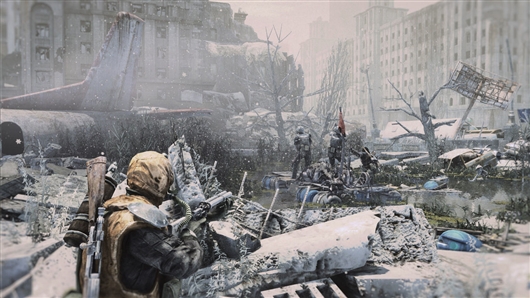 The environmental ambiance is truly something to behold, and while gameplay is strictly linear, a feeling of openness still lingers once you make your way into the open and sparling outside world.

One of the titles I'm most anticipating in the coming months is Ori and the Blind Forest. A sidescrolling graphic adventure with an intriguing setting, Ori looks like it will be a really fun playthrough on slow night. Filled with darker tones and neon lights, the story follows Ori, a guardian spirit that fell into a forest and was adopted/nursed back to health by a bear-like creature. After a malevolent spirit takes away Ori’s new found mother figure, he is forced to set out into the forest to solve its mysteries on his own.

I used to only enjoy competitive titles where I could be on some leaderboard somewhere, but after playing my first graphic adventure I’ve broadened my tastes to include more story driven games. With the next generation of consoles setting new standards for graphics and all the emphasis on games being made “beautiful”, I’d highly recommend you pick up one of these titles, just how i’d recommend a good book.

Deep Silver just released Metro 2033 Redux, which is a remastering of both 2033 and Last Light, it’s sequel. Both are available on steam for just under $50, and i’d highly recommend them!