In World of Warcraft (WoW) you’re always bound to come across different kinds of people. After all, the MMORPG genre puts thousands upon thousands of complete strangers with overwhelming anonymity together in one place. Sometimes certain new activities become popular as a result from the safety of relative anonymity. When people in a fantasy world are unbound by their earthly restraints and can allow their imaginations to run wild, a new kind of player emerges.

Roleplaying has been popular in MMORPGs for a long time, and while their communities are normally small compared to the game’s greater population, they’re some of the most passionate people I’ve ever come into contact with. To quickly define roleplaying in terms of WoW, it’s when a player creates a backstory for their character in-game. They strictly adhere to this backstory at almost all times (depending on the degree to which they’ve dedicated themselves to the roleplay). This means they speak in a manner befitting the situation, sometimes changing spelling to match certain regional dialects or jargons etc etc. 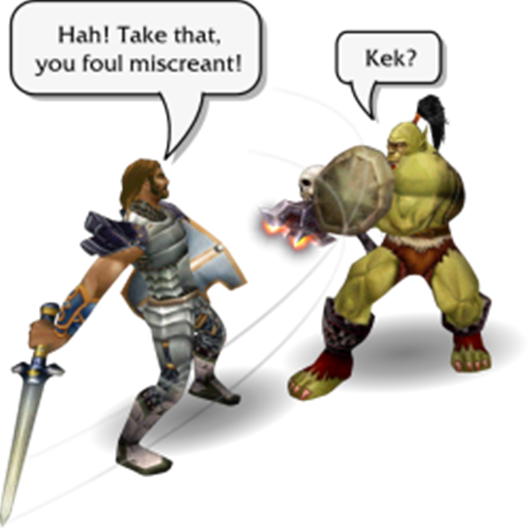 I first became curious about roleplaying (RP) in WoW when I started a new character on a roleplaying specified server called Wyrmrest Accord. I wanted to play with a coworker that had recently gotten back into the game, so I didn’t really give the server being played on much thought. At this time, servers are interconnected with each other, so the Wyrmrest Accord server is actually linked in neutral zones to another one called Moon Guard. Moon Guard is one of the largest RP servers in North America, and almost everyone who played on it was involved in some kind of RP.

Being a long time raider/pvper in WoW, the thought that some people were perfectly content sitting (literally) in an inn or city somewhere, acting out these roles instead of actually playing the game was alien to me. Nonetheless, I was curious, so one day I decided to take a trip to the central hub for Alliance RP on Moon Guard, the Goldshire Inn. 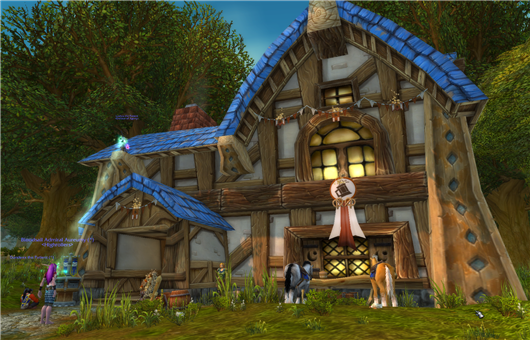 As I approached the Inn from outside nothing really looked out of the ordinary, there were a lot of people around, but that’s not so foreign to other servers either. People dueling and chatting, “okay, this all seems normal”. What was different was the inside of the inn… Literally wall-to-wall people in varying levels of undress emoting to each other. It’s one of the most interesting spectacles I've ever beheld. I went upstairs and was met with a similar situation, this small building in the human starting zone was home to more people than most major cities in WoW. 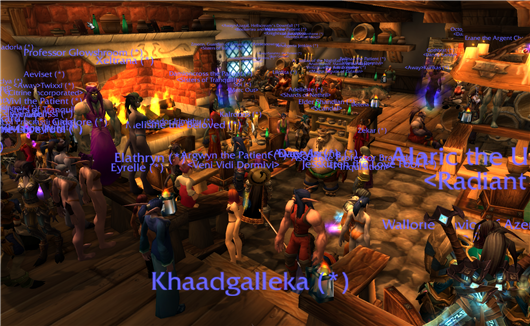 To learn more about RP I had to talk to someone on the inside. I remembered I had a friend who got really into RP a while ago. We actually stopped talking for months after he joined a RP guild and spent all of his time in Silvermoon City acting out scenarios, and eventually leading an RP guild of his own. In a brief interview I asked him several questions about his experience in RP, these were his responses:

Alex Danger: What server/where did you roleplay?

Mr. B: Started off in Emerald Dream but transferred to Wyrmrest Accord. The RP was more of a thing there.

Alex Danger: What kind of system did you guys operate on? Was there a leader of the group? In an RP guild?

Mr. B: Uh, it honestly all depends on what kind of RP the guild was. For example, my first RP guild back on ED was an academy based guild in which the leader of the guild was a chancellor while the officers were teachers and all that.

Then there was RP guilds which came up with pretty much w/e they wanted. Breaking the lore in a sense, it was kind of frowned upon apparently but I didn't care. I honestly think as long as you're enjoying yourself who cares if it doesn't go with WoW lore.

Alex Danger: I see I see. And people would never break character while participating? what were some of the rules?

Mr. B: Well, if you wanted to break character usually people would add parenthesis for example, say if I were in the middle of roleplayer and i wanted to ask a question out of character I'd type, (Hey, how does this work?)). Implying that you are out of character. Guilds usually have different rules for RP'ing

Some use the guild chat for in character rp'ing in case some were too busy to rp near each other, and if you wanted to talk out of character, guilds would make a chat channel and people would join and talk oout of character there.

But some guilds actually take rp'ing VERY seriously and talking out of character during certain events and things like that was not allowed. Which isn't exactly my cup of tea.. I didn't mind bs'ing during little events as long as it wasn't completely interrupting the event

Alex Danger: My sources say you were a GM at one point, how did that go?

Mr. B: Eh, stressing tbh.. Some people weren't meant to lead a guild. I am definitely one of those people.. I'm not really the type to deal with confrontation so having to be on top of events.. recruiting.. constantly making sure everyone was getting involved in some of the events was a hassle. I ended up passing leadership to a friend of mine and left the RP scene altogether. I'll be honest leading a raiding guild consisting of a few of your friends was alot easier to handle.

Also, dealing with people who don't like what happens in certain events

Alex Danger: You keep saying "events", what do you mean by that?

Mr. B: Well, I call em events.. Usually, a GM, officer, even a guildie would come up with these little adventures for example. My character and two of his academy comrades had to go capture a dreadlord... Which kind of ended badly but stuff like that think of it as little adventures that are planned that's usually guild only events.

I’m sure even this brief interview is only scratching the surface of the RP world in WoW, but it provided good insight to the average activities/function of some RP guilds. I can’t say I’ll ever be into roleplaying, but I suppose the boyish gamer in me can see the appeal to truly living your character while playing. Roleplayers are some of the most passionate and dedicated WoW players I’ve come across, going as far as scolding those breaking out of character during events and at other times. This again just gives us another angle to which we can look at and appreciate gaming in its modern form, and how players all over the world can enjoy it.