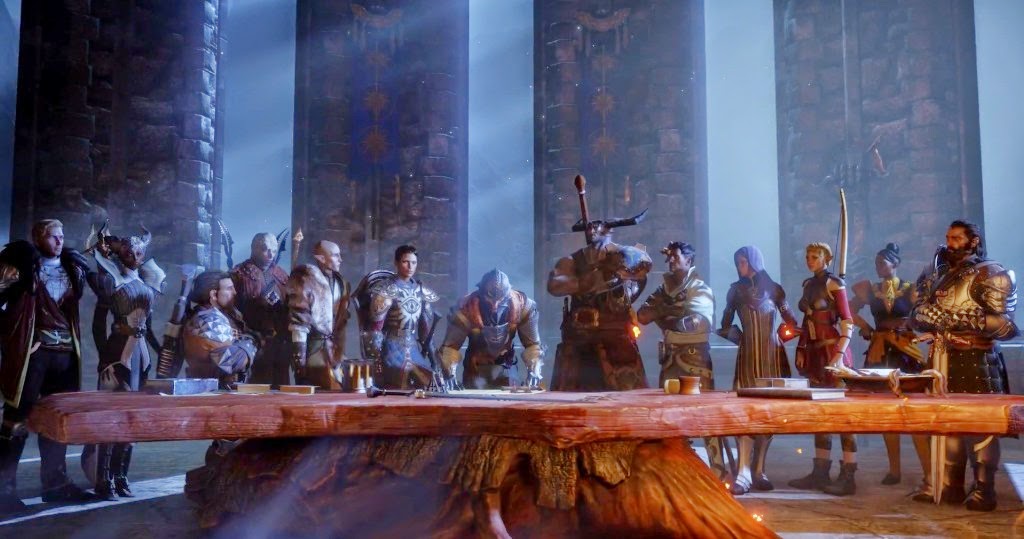 Whether or not fashion is important to you, you still wear clothing. You may wear a t-shirt depicting your favorite super hero or a crisp blazer that mirrors your professionalism. Either way - it's a choice you make that often reflects your interests, mood, or personality. Our fashion choices paint a picture of the person we are, and the same can be said for characters in video games. Though you may not always notice, a character's attire can often reveal quite a lot. In this post, I'd like to take a look at a few of the wardrobe choices for the characters in Dragon Age: Inquisition. We'll look at what they're wearing, why it's important, and what it tells us about them as a character. 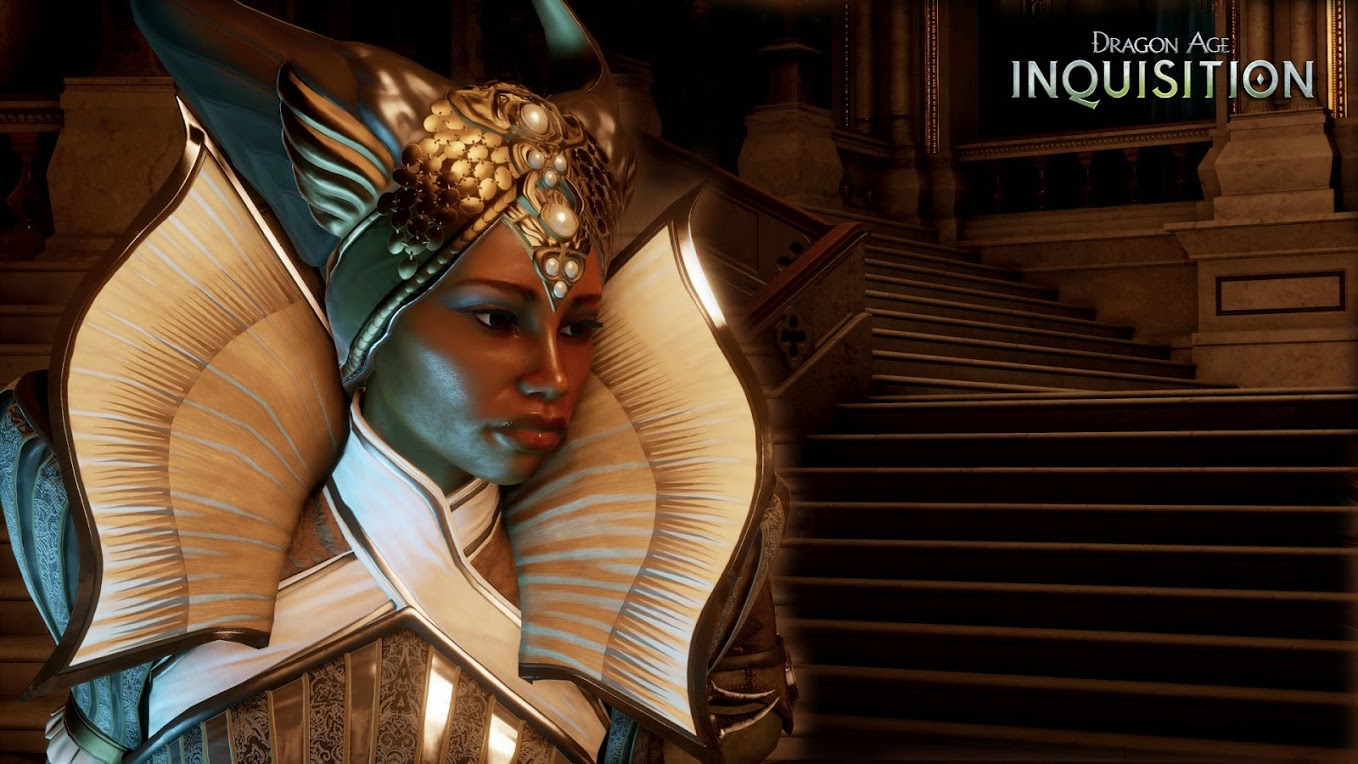 Vivienne’s attire in Dragon Age: Inquisition is what you’d expect of an advisor to the Empress. Her large headpiece is shaped to resemble a set of horns and is covered with embellishments. That, paired with her oversized collar, gives her the appearance of a villain or powerful foe. Her symmetrical clothing ranges from darker browns to whites with a myriad of fabrics. Her sleeves resemble crushed velvet, while the rest of her garments appear to be a combination of silk, lace, and other quality fabrics. Vivienne is quite stunning, and her choice of attire shares a lot about her personality. With so many oversized elements in her wardrobe, Vivienne appears standoffish and intimidating. She’s not one to be overly generous or open up about her feelings. She stays away from brighter, more flamboyant colors and opts for muted tones. Her regality is in no way diminished by this, but her color choices instead contribute to her powerful, stoic demeanor. Vivienne’s clothing does a fantastic job of mirroring her commanding, regal personality. 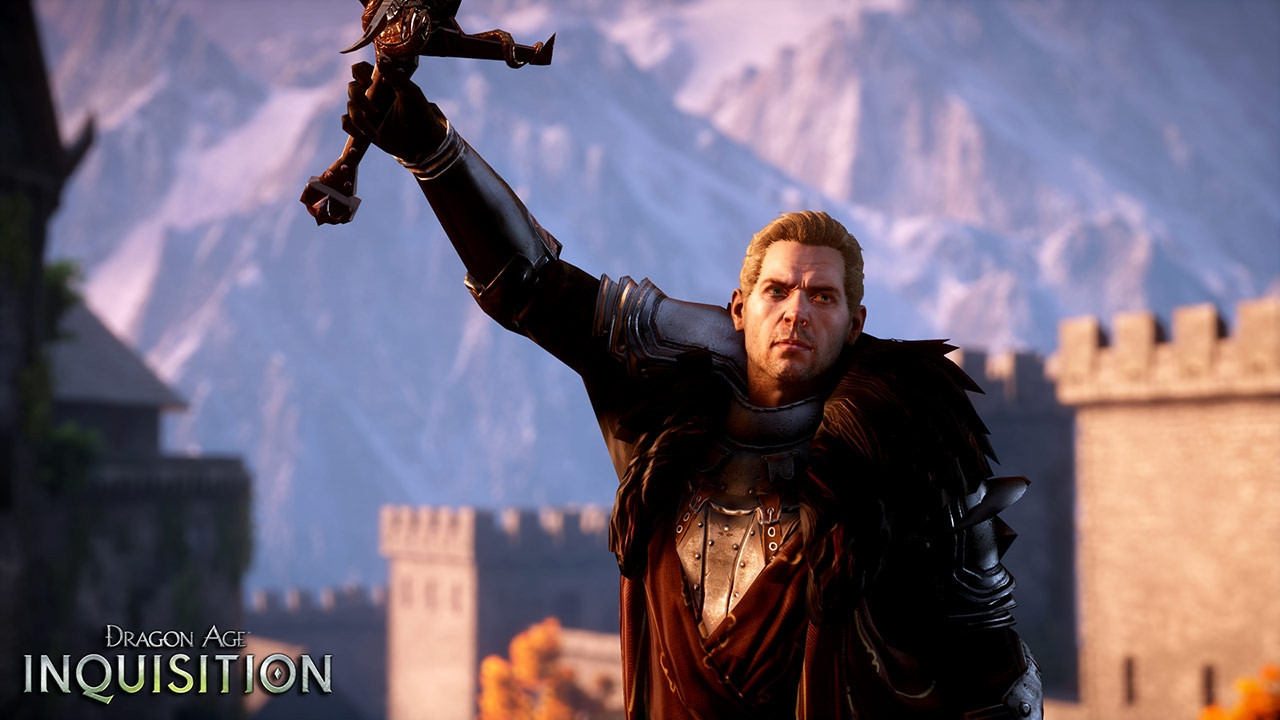 Cullen is heavily armored and ready to charge into war at a moment’s notice. Unlike Vivienne, he isn’t drowning in a sea of expensive fabrics or decadent jewelry. As long as it’s worthy of the battlefield, Cullen is content. His heavy armor is worn and scratched, but still appears cared for. Cullen's shoulders are buried underneath a heap of brown and red fur. This added piece of attire could very well represent the heavy burden that Cullen carries on his shoulders. Whether it’s his family, lyrium, or Darkspawn, Cullen bears the weight of the world everywhere he goes. Despite the lack of jewelry or extravagant armor, Cullen maintains an commanding presence. His clothing accurately reflects the strong, modest hero he truly is. 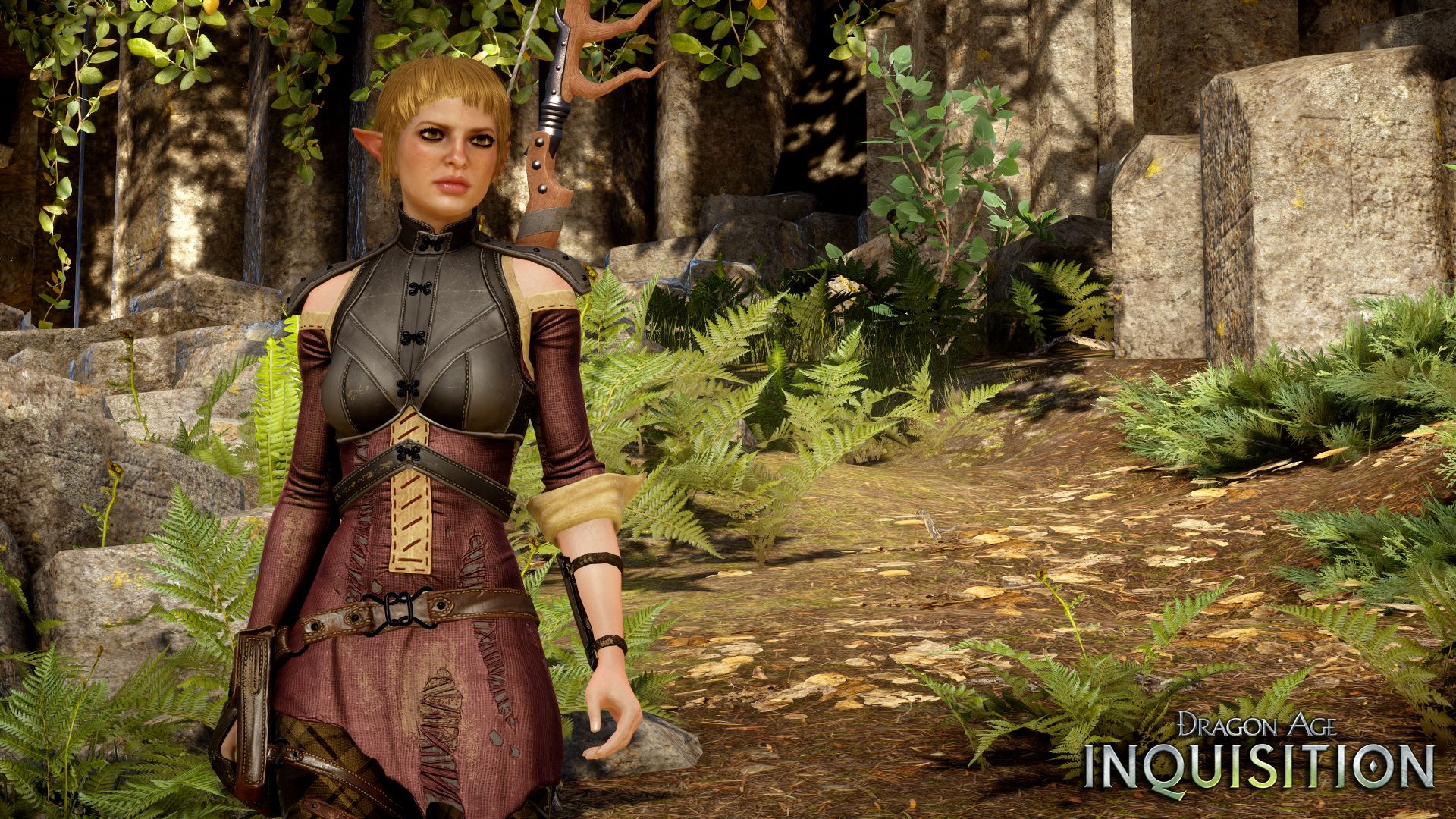 Sera’s attire is a mixture of practical, convenient, and seductive. Her clothing is worn and tattered, but, unlike Cullen, she doesn’t seem to put much effort into maintaining her wardrobe. Her blouse is full of holes and nearly ripping apart at the seams – but it still works, and that’s good enough for Sera. Leave the jewels and posh fabrics to Vivienne; Sera has more important things to worry about, and all that jewelry would only weigh her down. Her shoulders are visible underneath small shoulder pads, and her feminine figure is very evident in her clothing. She’s youthful, flirty, and has a sense of freedom about her. Her torn clothing, offbeat prints, and mixture of colors and textures mirrors this perfectly. 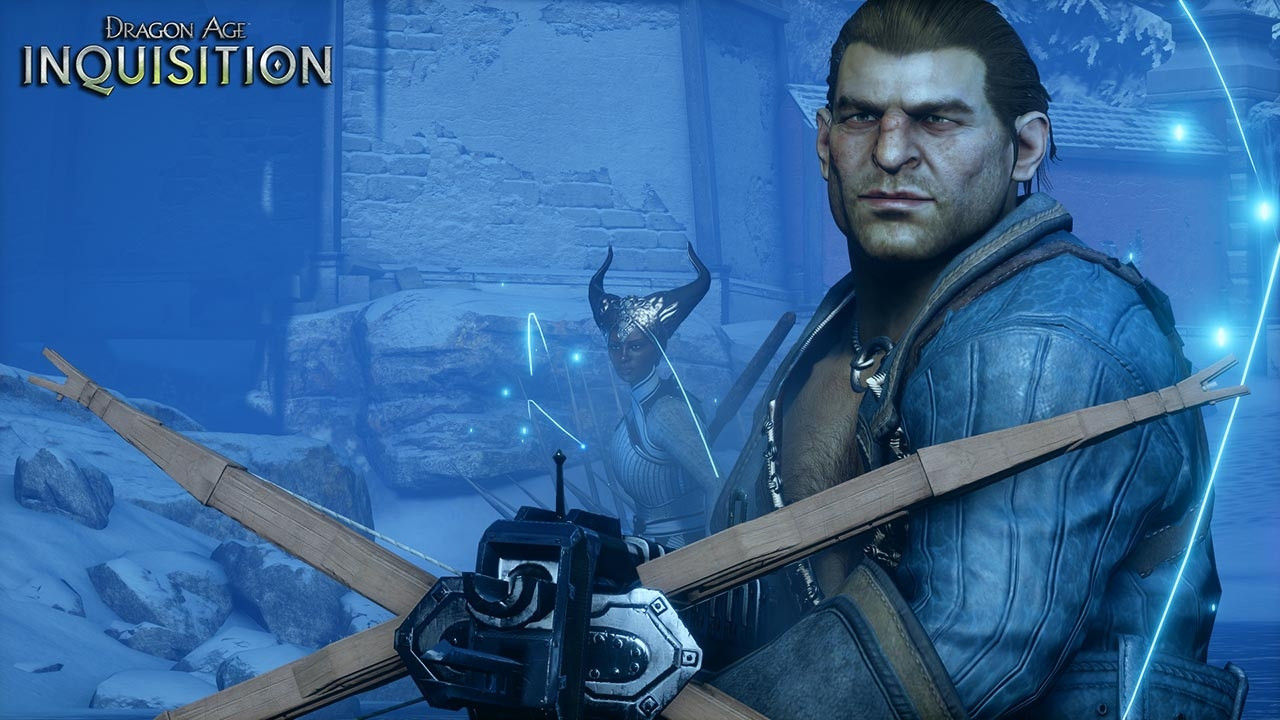 Ahhh – Varric. The crossbow-wielding, smooth talker that we all love. Even though Varric carries a heavy burden emotionally, his upbeat attitude and sense of humor never disappear for long. The most prominent piece of clothing in Varric’s wardrobe is, without a doubt, his shirt – or lack of one. Varric has a ton of chest hair, and he prefers to let everyone see it. He’s confident, cool, and could easily pass for a character in one of his romance novels. Like Vivienne, Varric wears jewelry, but his lacks the regal, expensive feel that hers possesses. The strong, metal pieces he wears are rugged and simple. His shirt is rather ornate with rich, red fabric and elaborate gold embroidery, and his waist is cinched by a contrasting green and gold belt. Again, these pieces mirror Varric’s charisma and confidence. The rest of Varric’s attire is rather practical – a sturdy coat, pants, and boots. He may be willing to be your wingman in any given tavern, but he’s still there to crush Darkspawn and support the Inquisition. 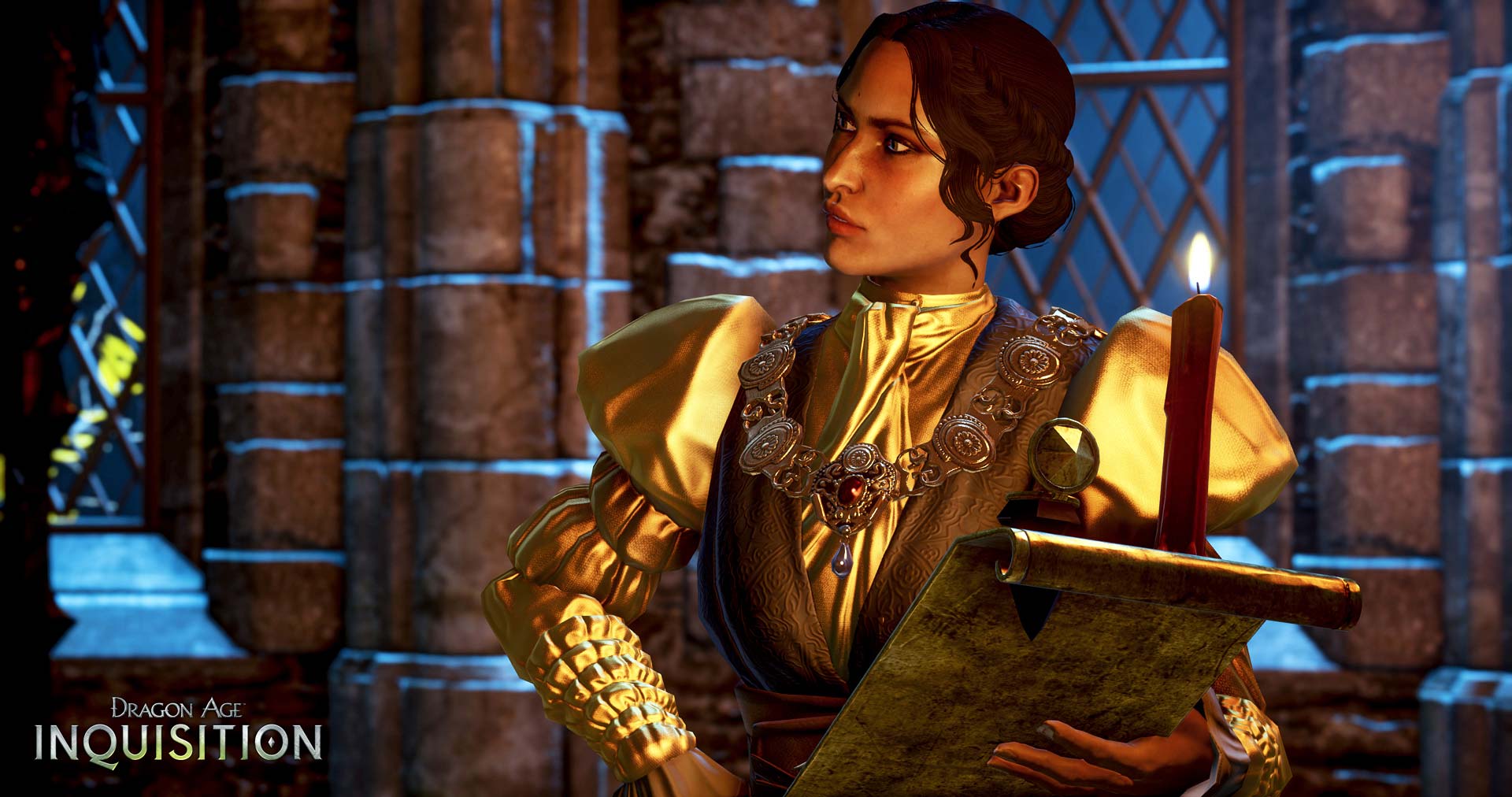 Josephine is poise, proper, and knows exactly what to say to make nobles agree with her ideas. She exudes professionalism, and her attire reflects this. Her gold top stands out against the often bleak fabrics of other characters. Though it isn’t embroidered or covered in jewels, the fabric manipulation is precise and expensive. It’s modest, but demanding. She wears no earrings or bracelets, but she does have a large necklace draped across her chest. The piece of jewelry is anything but dainty; it’s elaborate, symmetrical, and could easily appeal to any rank of nobility. The remainder of Josephine’s attire is prim and practical. Her skirt has large pockets, and her thick leather belt breaks up the volume in the rest of her ensemble. For Josephine, appearing put-together is important.

While some gamers may fail to pay attention to garment choices in video games, it’s likely they notice them subconsciously. Each character’s clothing helps establish their personality and express what’s important to them in the game. For Josephine, her relationship with wealthy landowners and Inquisition allies is at the forefront of her priorities, so looking professional and regal is a necessity. On the other hand, Sera’s free spirit and lack of commitment is shown her in tattered clothing and mismatched fabrics. Their clothing preferences could not be any more opposite, and their very different personalities are mirrored in their fashion choices.

Do you feel that the clothing choices in Dragon Age: Inquisition suit each of the characters? Whose attire do you like the most?