The Star Wars: Battlefront reboot trailer has gotten everyone excited, and for good reason; Battlefront is one of the best utilizations of the license in video games. It’s easy to forget that the Star Wars franchise is about as old as gaming itself, and it has been dipping its toes in the interactive market for decades.

Such a long history with games has produced a long list of hits and misses when it comes to Star Wars. We’re gonna focus on the hits. 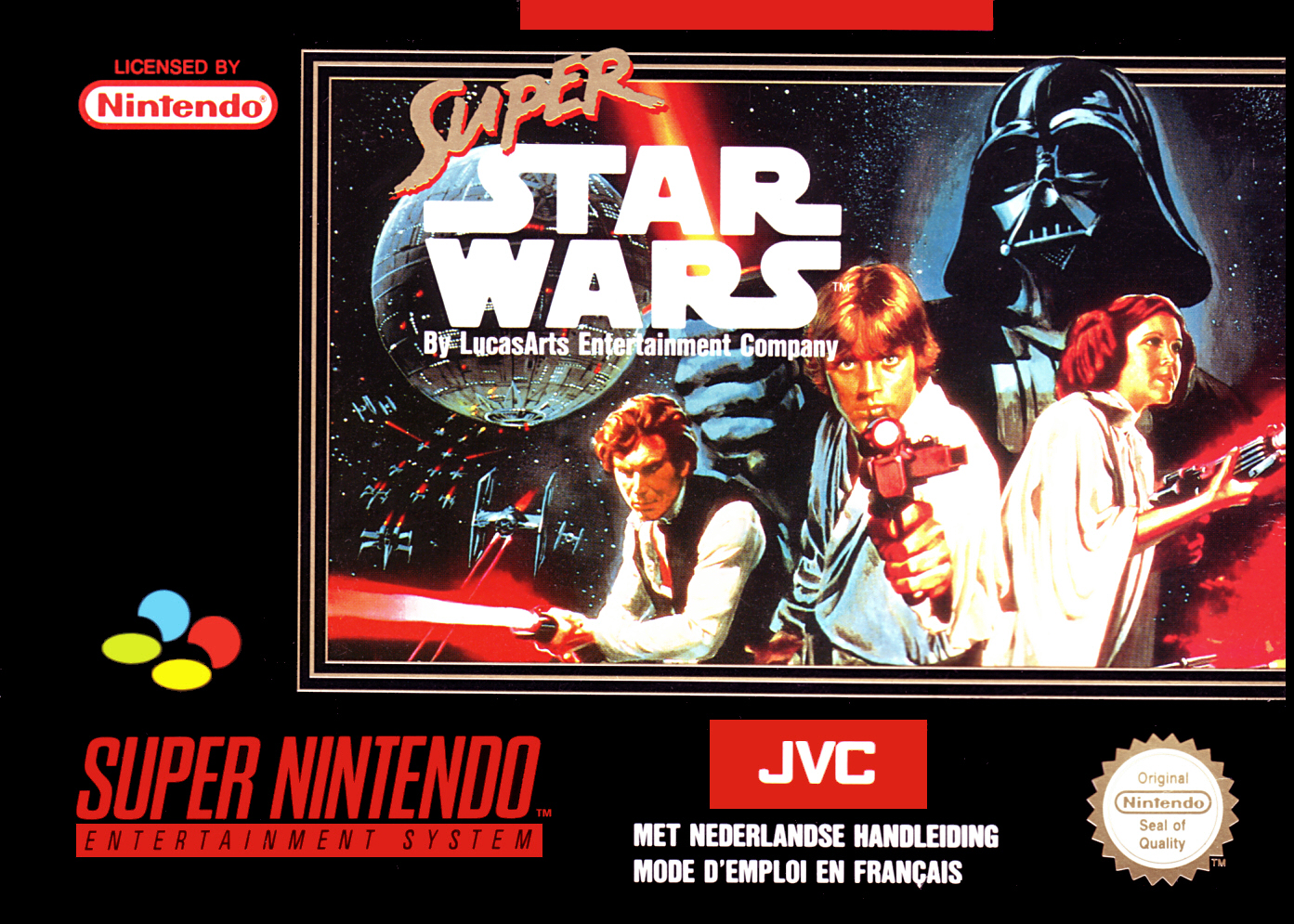 These aren’t the first games based on the original trilogy, but they are widely considered the first good game adaptations of the George Lucas movies classics. As far as 90’s, side-scrolling platformers are concerned, these games are top-of-the-line romps through the events of the three original movies. Over the course of the three games, you control the likes of Luke, Leia, Han, Chewbacca, and sometimes Ewoks, all while encountering baddies from the movies like the sarlaccs and rancors. The games also feature vehicle stages that involved flying X wings or speeder bikes in Mode 7 a la F-Zero. As there are better games to play nowadays, it’s hard to recommend these titles to people who aren’t the most hardcore of Star Wars fans. 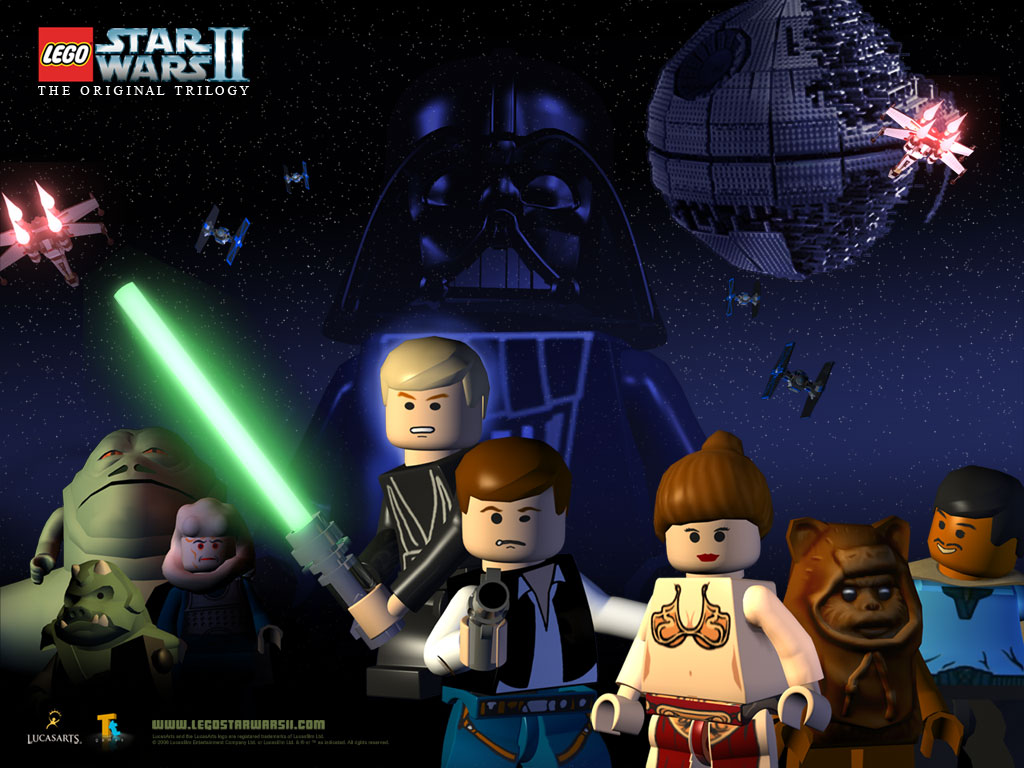 Before the LEGO train went off the rails, games designed like the popular building block sets were quirky and fun romps through familiar franchises like Harry Potter and eventually Star Wars. From the reckless twisting of your character as they swing their lightsaber at enemies to the way your partner bursts into Lego bits when you hit them accidentally, this game succeeds at emulating that “playing with toys” feeling from your childhood. Couple that with the clever ways developer Traveller’s Tales wedges Star Wars lore and references throughout, and you have a game jam packed with content for fans of all ages.

This first person shooter was a DOOM clone that found a way to outperform its inspiration in various technical aspects, while also providing a compelling story about characters who weren’t lightsaber enthusiasts. When civilian Kyle Katarn’s parents are killed, he joins the Empire in hopes to take revenge on the Rebel soldiers who caused their death. During his service, he finds it was the Empire’s doing all along. Conflicted, he lives life as a merc, preferring jobs that help damage the Empire.

Probably the biggest feature in Dark Forces is the ability to look up and down, as it was one of the first FPS games to give your head free movement. Narratively, the game also created quite the cast of long standing cult classic characters including Katarn, who would go on to star in many games in the expanded universe. 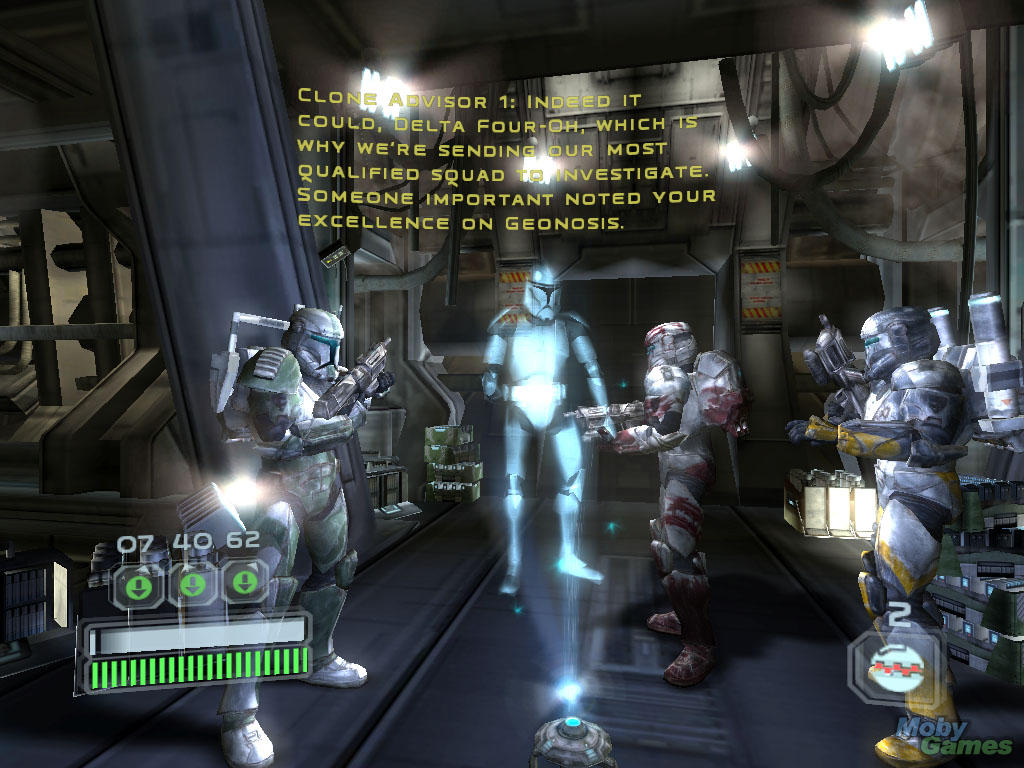 Republic Commando is one of those games you appreciate more and more over time. This squad based FPS really is one of the coolest games of its time, and it's one of the first to embrace the idea that the player is a leader of a small squad and can give orders to these individuals to achieve tactical advantages. Each of your squadmates had lots of personality as well, something rarely explored in Star Wars lore. Soldiers tend to just be carbon copy man killers, but each of your men have specializations and personalities. It further enriches the world around you, reminding you the Star Wars isn’t always about the Force. 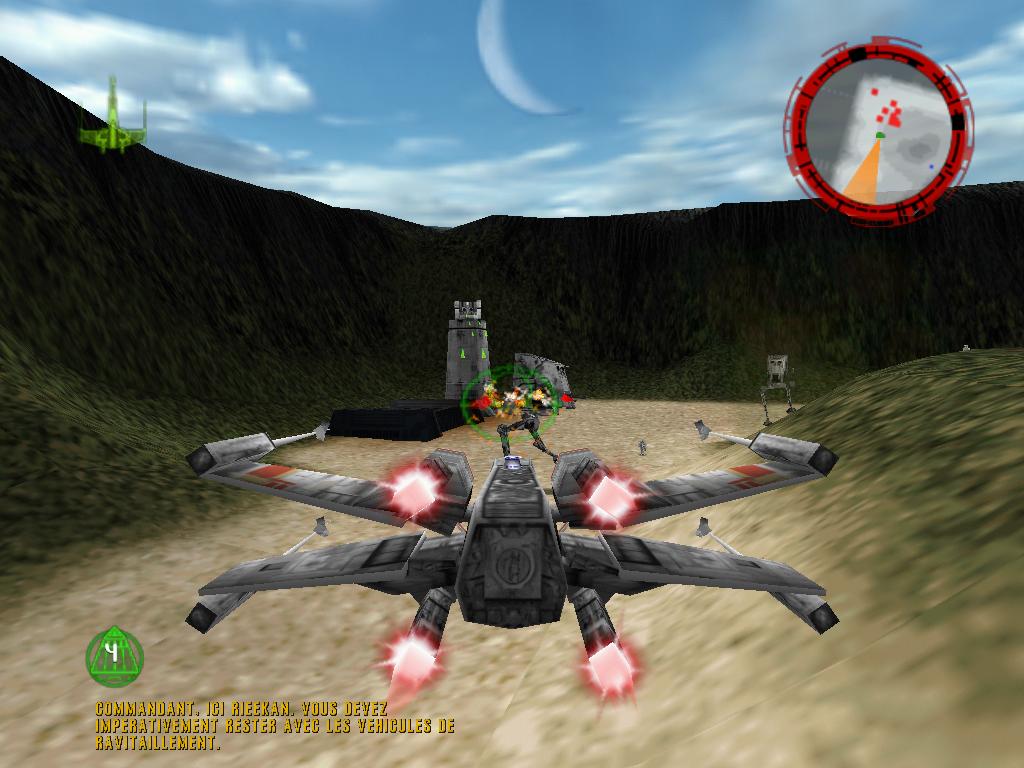 Probably the last great Nintendo launch title, Rogue Squadron II plopped players into the cockpit of the Star Wars universe’s most iconic ships during some of the franchises most important battles. It plays a bit like Star Fox, but with a Star Wars slant that is still unmatched. The Death Star trench run still hasn’t been done better than in this game. It also looks great, even now. The textures are obviously blander than today’s standards, and the frame rate and resolution doesn’t even compare, but it's still beautiful in a time capsule sort of way. 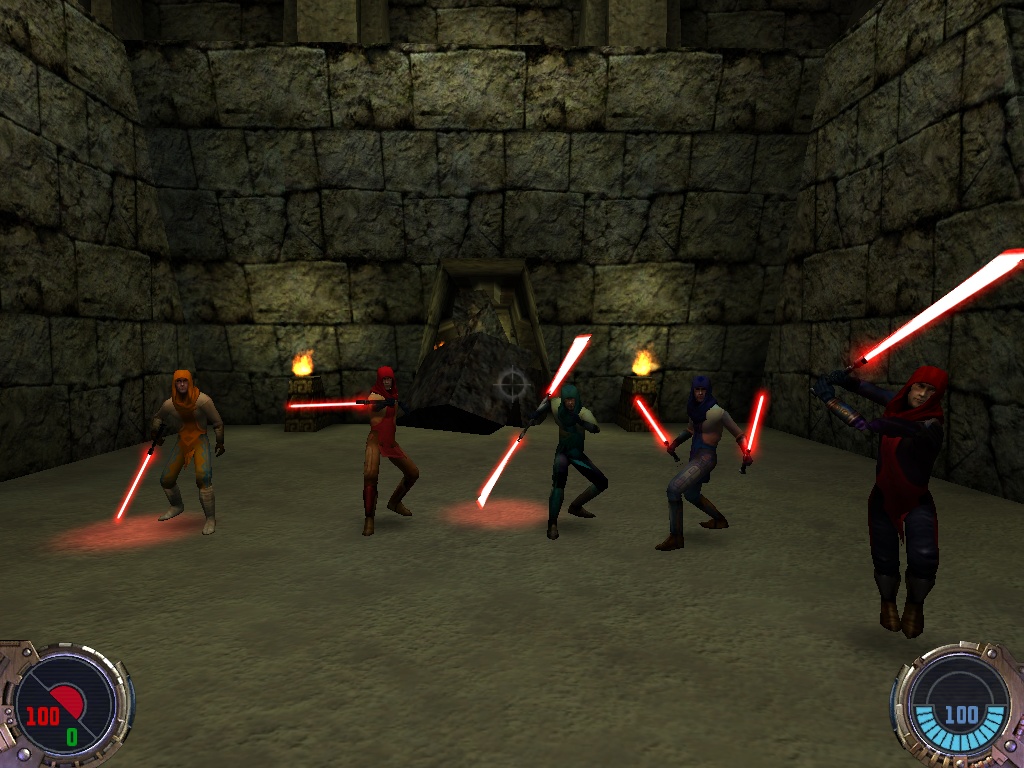 Jedi Outcast is THE Star Wars game for anyone who’s secretly wanted to be a Jedi as a child. So, you know, everyone. The lightsaber combat is rewarding, and the wide array of Force powers at your disposal is encouraging. The story is strange but inviting in an action movie sort of way (revolving around the aforementioned Kyle Kartan), and the multiplayer, in all of its chaos, is secretly the best part of that game.

The next logical step from Jedi Outcast when it comes to a hardcore, combat-focused Star Wars game is The Force Unleashed. Filling in the gap between the prequels and the original trilogy, this game introduces you to Vader’s apprentice, Starkiller. Starkiller brings a new found dimension to the established lore, further characterising Vader as a mentor and an example of the pure destruction the dark side of the Force can bring. He pulls a Star Destroyer out of orbit! A STAR DESTROYER.

The game was a lot of fun to play, and, as it wasn’t without its hiccups technically, it stands on its own as a must play title. It’s worth mentioning that whether this title is better than Jedi Outcast is one of the most hotly contested arguments around any Star Wars game. 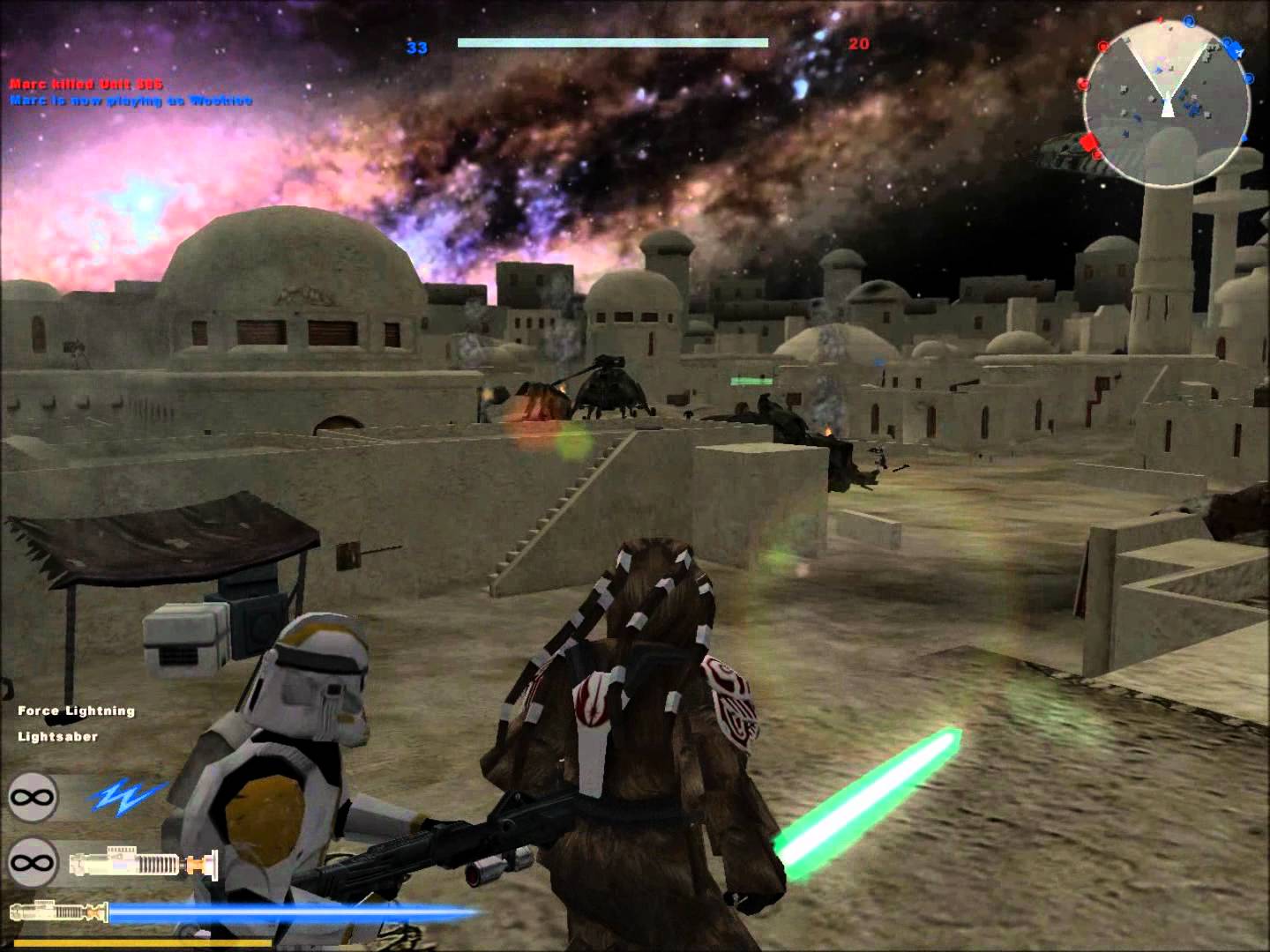 3. Battlefront I and II

“Let’s make a Star Wars game that's like Battlefield,” said some absolute genius who deserved an immediate raise at Pandemic Studios back in 2002. The first Battlefront would launch in 2004, and it sparked the curiosity of a legion of Star Wars fans. Putting players in the trenches as regular troopers for either the Rebels or the Empire and letting them battle in vehicles or on foot for objectives and points was a brilliant departure for what was normally Star Wars game protocol at the time. With improved single player modes, AI, and the addition of Force using special characters that could join the battle under limited circumstances, Battlefront II took the formula to the next level. With a sequel finally official, one can only imagine where to take this series next. 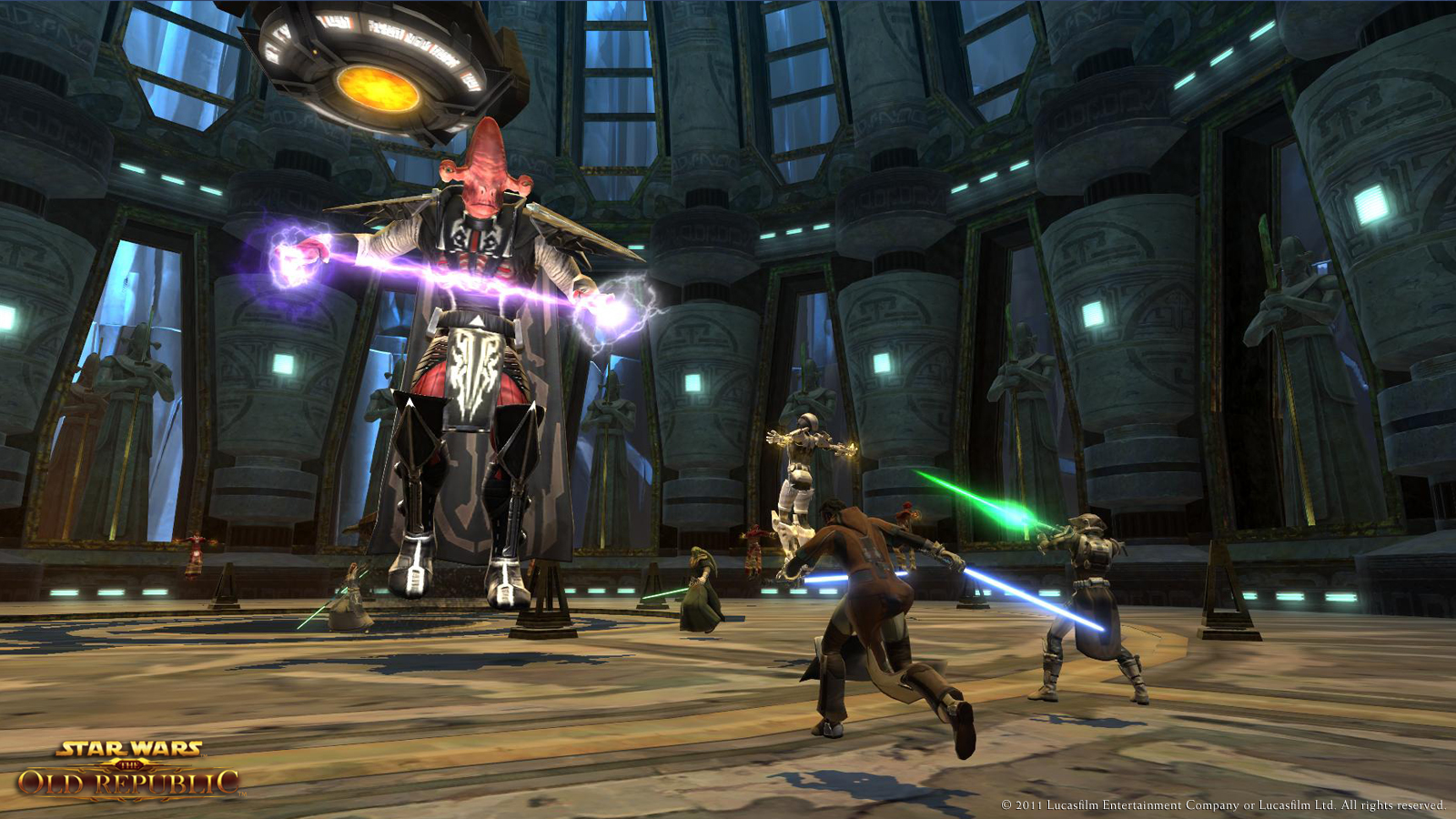 With the lessons Bioware learned from their time with Knights of the Old Republic, capitalizing on the truckloads of lore and popularity of MMO’s really lead to one inevitable conclusion in 2011. Unfortunately, the game didn’t reach the financial goals sought out by Bioware and publisher EA, and TOR eventually became free-to-play. Though it didn't meet many players' expectations, The Old Republic had all the best parts of the single player RPGs that you could now sprinkle your friends into. As an MMO, it did attempt to turn certain tropes of the genre on its head and add some brand new concepts like morality and space combat, but all in all, this was an MMO only for KOTOR fans waiting patiently for KOTOR 3. 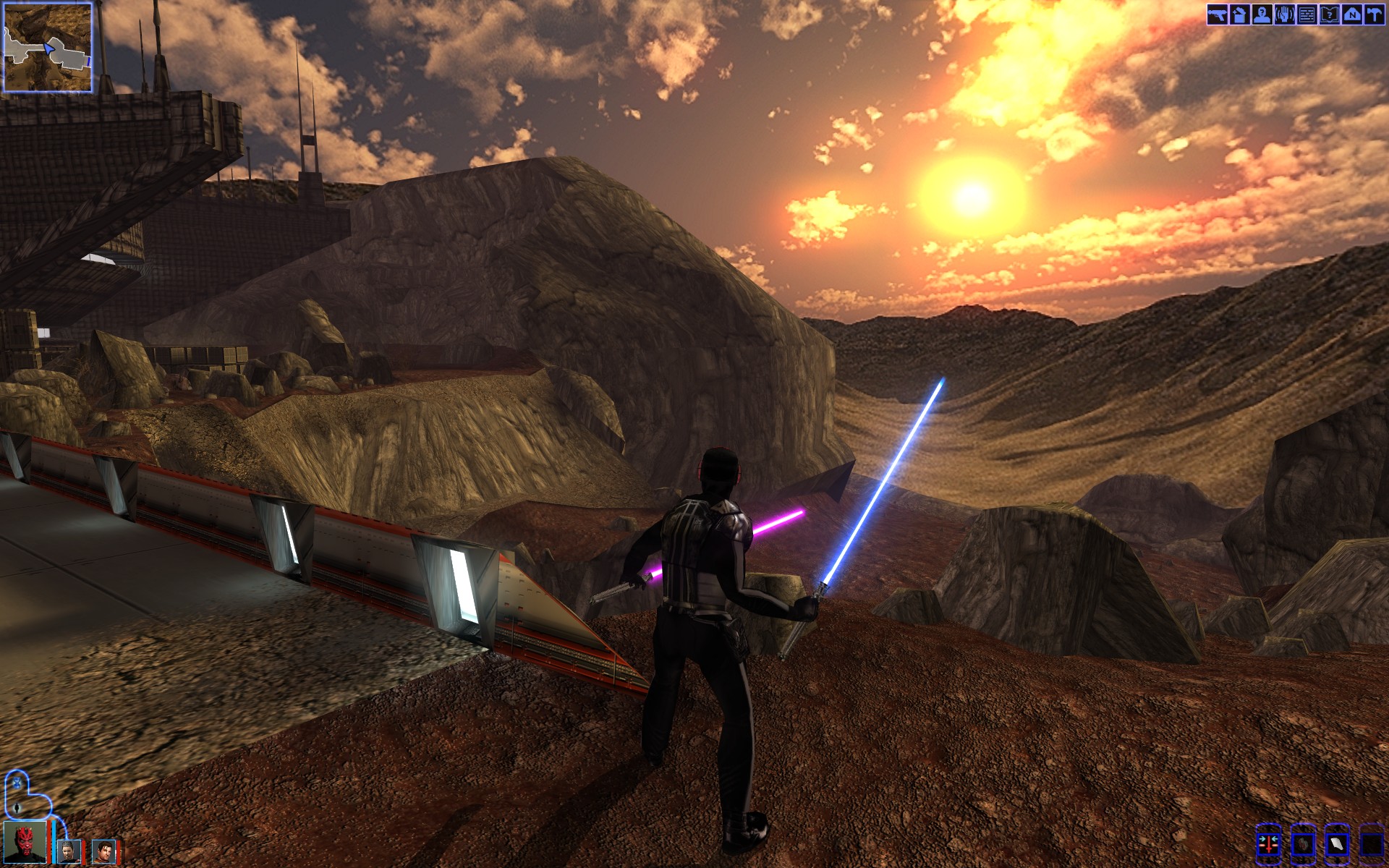 Speaking of The Old Republic, there’s nothing quite like the game series that inspired it. I include both KOTOR 1 and 2 because of how similar they are in gameplay and how closely related their stories are. The deep respect for this extended lore is evident in every nook and cranny of these games. Things only referenced here and there in movies and games before it are fully fleshed out, ready for exploration in ways we never expected. The story still revolves around Sith and Jedi, and still takes place in that same galaxy far, far away, in a time long before Vader went all Maury Povich on Luke. The Old Republic was a time when the galaxy was still a wild place, and Force users were abundant. Back when there were roving clans of Boba Fett-style badasses. Back when Dark Side or Light Side wasn’t so simple. KOTOR also introduces one of the best Star Wars characters of any time period in games, movies, or books in Revan. Trust me, you need to play these games.

What’s missing? (It’s ok, you can say TIE Fighter.) Comment below or tweet @CurseGamepedia with your favorite Star Wars games.