The Silent Hills remake is dead. Drama has plagued developer Konami in recent months, stemming from its weird kinda split with legendary game designer Hideo Kojima. The split has been played out in the media in the worst way possible, thanks to the awkward silence between both parties. Or at least, on Kojima’s end. Konami has made it pretty clear that they want little to do with the man after Metal Gear Solid V, removing his name from promotional materials and his association with the big remake.

There is still a lot of story to be told about this game. But there’s plenty of other games with crazy cancellation stories. The following are three such games. 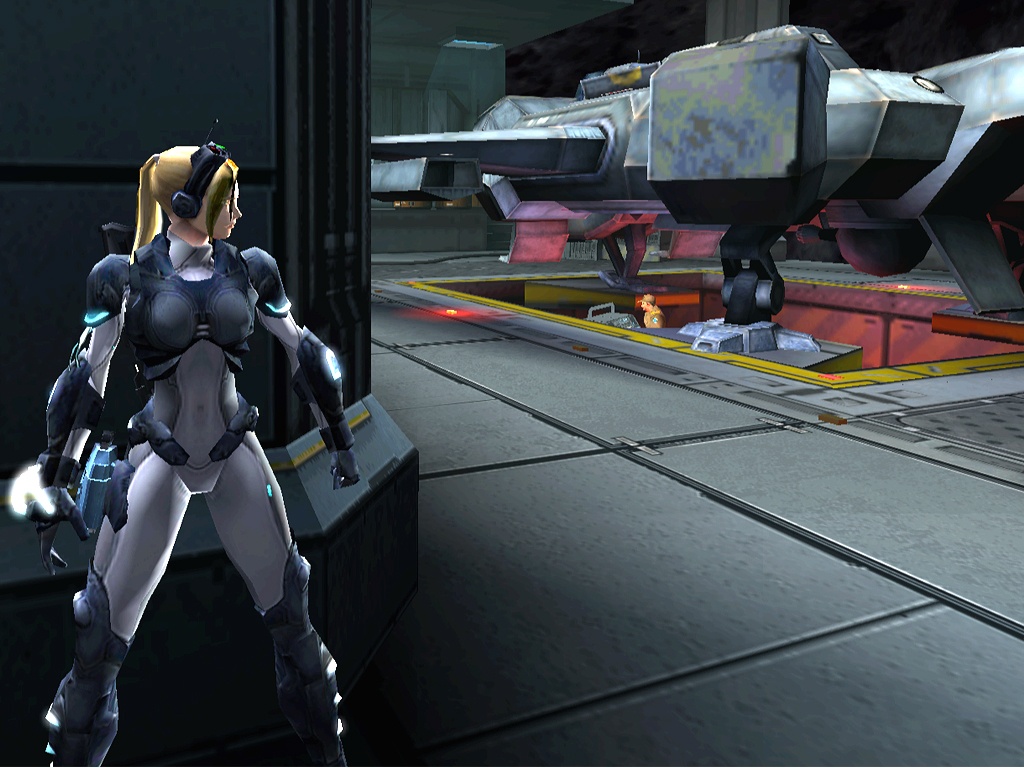 StarCraft: Ghost was announced in 2002, and it set to place players in the cloak suit of psychic sniper, Nova, and present the StarCraft universe to us in a way we’d never seen it before. The third person shooter perspective would have given us a more intimate relationship with the isolated sci-fi set pieces we’re often swept through in StarCraft titles, and that’s without considering the many tactical options players would have while controlling one of the most unique units in the franchise.

Ghost has a long, well-documented history of delays and radio silence. Initially developed by Nihilistic Software (now nStigate Games and famous for Call of Duty: Declassified), delays and development complications lead to the team passing the game on to Swingin Ape Studios (Metal Arms: Glitch in the System) in 2004. Blizzard would buy Swingin Ape the year after and cancel its Gamecube release. By 2006, the game was officially put on indefinite hold, notably right after the PS3 and Xbox 360 were launched. Colloquial hopes were that the project had been put back in development for these new consoles, but the entire seventh 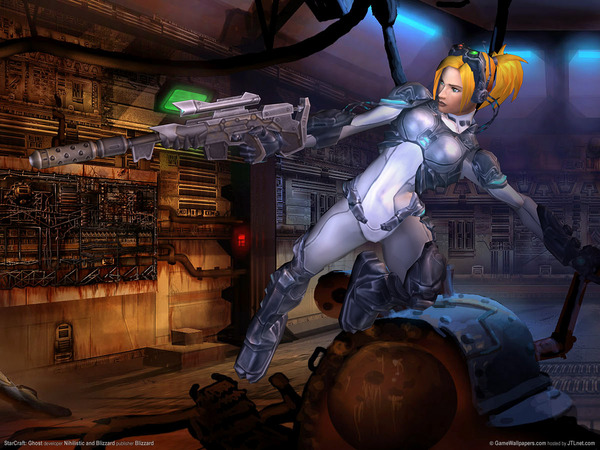 console generation passed without a peep from Blizzard about it.

Too be fair, Blizzard was busy during the 2000’s. Right after Ghost got its new devs in 2004, Blizzard would release World of Warcraft and single handedly change the MMO market forever. The rousing success of that launch would keep them focused on expansions and updates for that franchise, with little time to worry about this third person shooter experiment. Long time owners of Blizzard, Vivendi Games, merged with games giant Activision in 2009, creating an early version of the publishing titan that we see today. It 2010, the first of three chapters of StarCraft II was released, and even though it revived rumors of Ghost’s potential existence for a short time, it was officially confirmed as cancelled in 2014.

Though, Overwatch’s Widowmaker does seem suspiciously similar to the Ghost at a closer glance…

Fallout’s MMO potential is vast, considering how the single player game is very much a wide open, mission-based experience that encourages exploration and extreme character micromanagement. Interplay (Fallout, Baldur’s Gate) agreed, and in 2006 began the process of getting the Fallout MMO development’s ducks in a row. About 6 months after Interplay’s Form-8K - a general filing that informs shareholders of important corporate events like CEO retirements, bankruptcy, or in this case the massive undertaking of making an MMO - Bethesda Softworks (The Elder Scrolls V: Skyrim, Fallout 3) purchased the full rights to the Fallout IP from Interplay, a franchise they were about to make relevant again in 2008’s Fallout 3.

For a publisher that was about to potentially spend a great deal of money to make an MMO, it made sense to sell the IP to raise some capital at the time. Bethesda gave Interplay some very specific rules should Interplay want to retain their legal claim to the Fallout MMO. As we know now, Bethesda would move to rescind the license in 2009. That's where things got messy.

Did Interplay fail to meet Bethesda’s requirement of gathering $30 million and having development in full swing by April 2009? According to Bethesda’s initial court filings, yes. During the trial, though, Interplay would produce proof that designers and artists were hired prior to the deadline that produced significant amounts of development materials that should have satisfied the requirement. In 2008, 2 million shares of Interplay were bought by Interactive Game Group, LLC. which we can assume was how the money was raised. Bethesda didn’t let that get them down, though. They filed an injunction citing Interplay for copyright infringement, claiming Interplay was only allowed to use the Fallout name in their MMO, and none of the Fallout assets. A judge though that to be as ridiculous as it sounds and denied the request. A secondary lawsuit towards Interplay contractor Masthead was also denied quickly.

In the end, Interplay settled with Bethesda, relinquishing their right to the Fallout MMO and getting $2 million for their time. Though Interplay looked like they had a case, they probably didn’t have the money to stay in court with Zenimax and Bethesda. It may have also dawned on them that if they did stay in court, they wouldn’t have the money to make the game they fought to hard to keep. If Elder Scrolls Online’s lackluster first year is any indication, maybe it’s better that we don’t see a Fallout MMO.

Technically, this game was never officially cancelled and as recently as 2012, Atomic Games’ (Breach) president Peter Tamte believed the game to be “very important to [Atomic Games] for reasons far beyond making a product”. But the game hasn’t seen release since it was announced in 2009, mostly because Konami was afraid to publish it.

It all started as a project by Atomic to make training tools for Marines, given their past experience with modern military shooters. Members of the 3rd Battalion, 1st Marines were assisting in the production, but were deployed in Iraq to participate in the Second Battle of Fallujah. Tamte told GamePro that, after the Marines returned, they asked him to develop a game about their experience in the war. 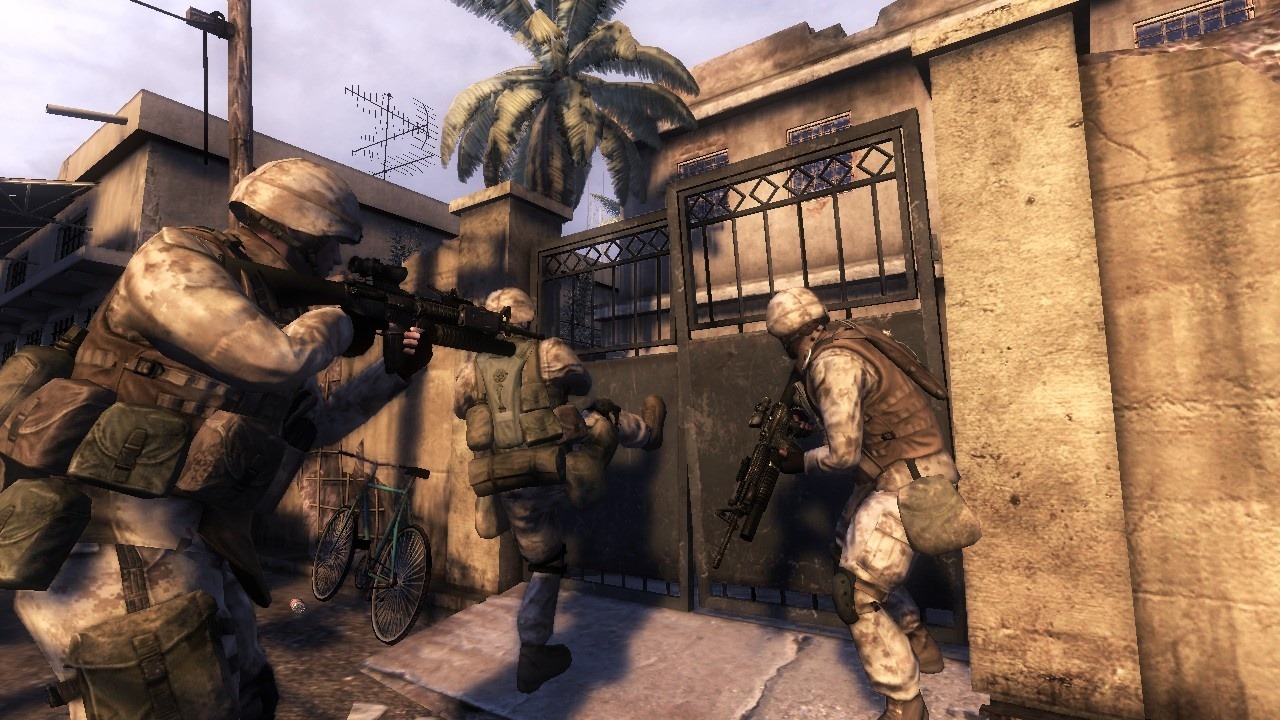 The 3rd Battalion’s actual experience was the design focus that held the entire product together. Real Marines lent their names, likenesses, voices, and detailed experiences to be recreated for the game. A true to life Fallujah circa 2004 was fully rendered and designed. Events and skirmishes were recaptured down to the bullet. This was to be more than just a game. It was to be a living history lesson.

The immediate backlash Konami received in the weeks after its debut was enough for them to formally back away from the project later that same month. It was considered too raw a subject to be covered in games. Now infamously, it was derided bya  father of a slain British soldier, claiming that war should not be “trivialized and rendered for thrill-seekers to play out…”. Other critics called the game “particularly insensitive” to what happened in the Fallujah, especially since the war was still happening at the time.

Eventually, military shooters like Spec Ops: The Line and Homefront would embrace a less glorifying, more cynical and critical views of war, telling stories that are less about wish fulfillment and more about the destructive effect war can have on both civilians and the soldiers fighting it. As the only game on the list with a real shot at ever coming out, I can only hope its re-debut is a reality.

When a game gets cancelled, it's never an easy story to tell. But some stories are worth recapping. What's your favorite crazy cancellation? Leave it below, or tweet @CurseGamepedia.