There are a lot of different places to physically buy a game, but on the digital front your options are rather limited. Valve has been in complete control of the PC game market because of how easy and centralized Steam is. A few outlets have provided competition, but there truly was nothing to rival the Steam client until now. GOG - or Good Old Games - have debuted the beta or their new game client, Galaxy. Before you jump in, there’s a couple important features you should know about it.

GOG’s cardinal feature was it’s DRM free distribution of digital software, and that will continue uninterrupted. As it’s hard to really call Steam’s DRM suite draconian, the fact that it can manifest itself in different forms of restrictions that aren’t always well presented and are out of players hands can be frustrating. Consumers are getting more and more savvy, and the hardcore bunch are looking for digital distribution services that replicate the ease of use and retainment of ownership that brick and mortar stores offer without having to leave their desk. This key concession will remain a big topic in the Steam vs. GOG debates.

The Galaxy client is in direct competition with Steam, but makes no attempts to block you from playing games from between the clients. This follows their on going philosophy of keeping a low profile when it comes to you doing whatever you want with your games. It’s smart, too - why shut out the largest digital distributor in the world, and home to the most PC players, just because they bought a game somewhere else? You’ll never lure customers over to your cause by forcing them to take a risk on your upstart software. 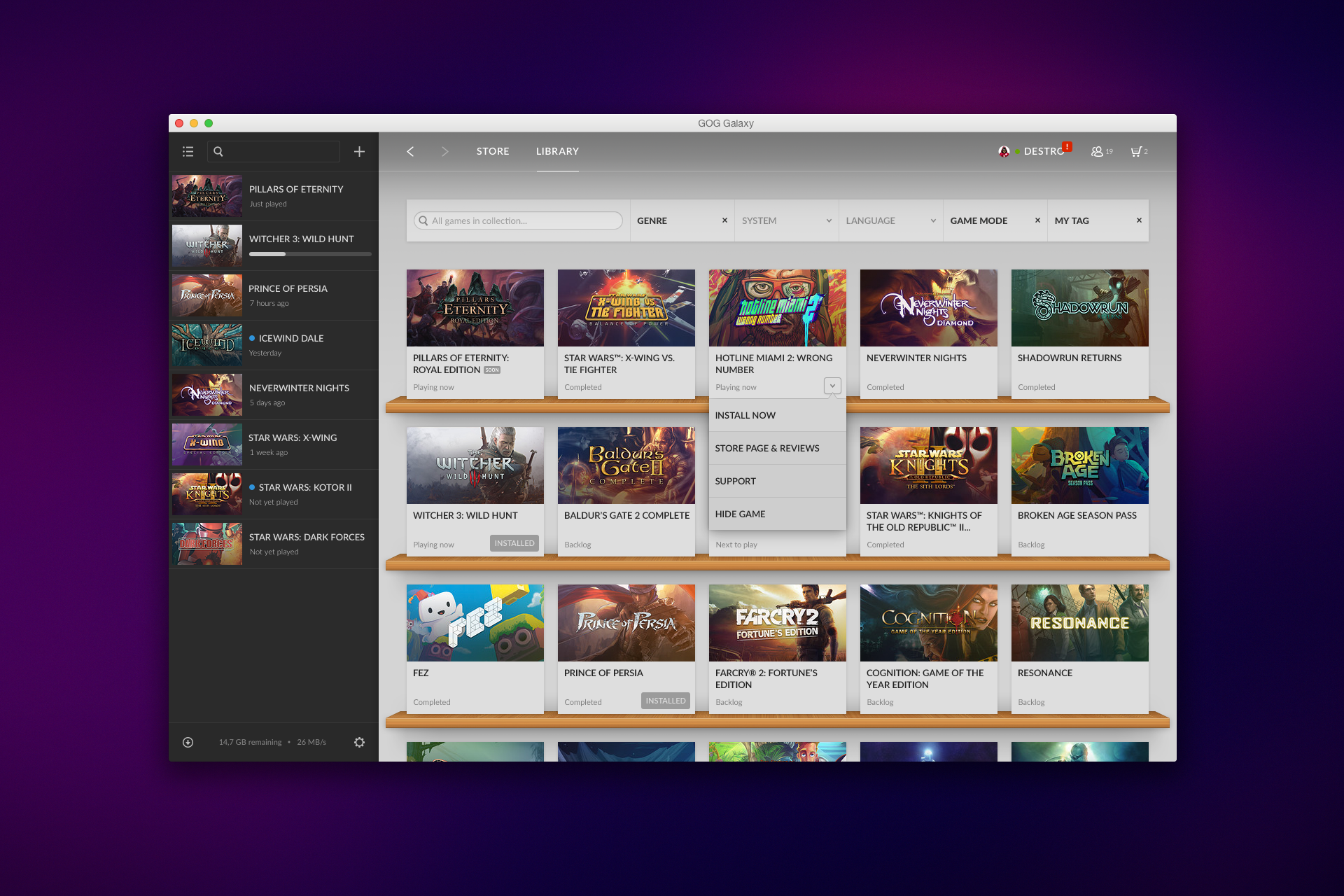 Oh no! That new patch for this awesome game broke it. What do you do? In Galaxy, you can reinstall an older version of your game, avoiding the issue until there’s a proper work around/fix. This beats the hell out of previous solutions to the problem, including trundling through forums for troubleshooting tips as the issue gets discovered, or looking in the dark corners of the ‘Net for older versions the hard way.

There will be a ton of features available to users out of the gate, with many more to come in the future. The most interesting one? That you can pick and choose which features you want to use. This is a big deal for a couple reasons. People like me would like as few applications running in the background as possible, as my paltry laptop doesn't have a large amount of processing power. But people who do want the social features, but not the achievements, and fine tune their experience to match their expectations.

The oddly defeatist caveat of all this hubbub is that you don’t even need the client to splay GOG games. You can choose to continue downloading your games from the browser menu, completely ignoring this thing. The incentive for GOG Ltd. - or their parent company, CD Projeckt RED - is to create a client so good that you would CHOOSE to use it. Interesting theory.

Is there space for two big game clients on you computer? If clients like Origin or Uplay are any indication, maybe not. But GOG is looking to make a dent in Steams market share, and is hoping the slick addition of some really clever features will be the key that everyone has been missing up to this point.

Will you try Galaxy? Tweet @CurseGamepedia or tell us in the comments below.