It’s been over a year since Hearthstone’s official release, but the amount of critical and financial success is still substantial. The amount of momentum this game has produced in such a short time is staggering, but even with that in mind, the rigamarole of playing Hearthstone is starting to become a drag. Whether it’s farming quests for gold, or playing Ranked or Arena matches for glory, it’s all very much still just playing many rounds of the very familiar Magic the Gathering-like formula. Even the single player adventures are just small distractions from the basic formula.

So when that bottom section of the now iconic main menu of Hearthstone was revealed to be a placeholder for a new gameplay mode -Tavern Brawl - it was bound to draw a lot of attention, no matter what it ended up being. Tavern Brawl doesn’t debut until late June, but if the descriptions are accurate, it’s exactly what Hearthstone needs to breathe new life into the game.Huh, that's new!

Tavern Brawl, according to Blizzard, will be a one on one mode that adds specific stipulations to many aspects of the game. Sometimes, you can only play with pre-constructed decks, other times you can only make decks under certain specific rules. This sort of meta tampering proves for great, short-term attention grabbers that modern games are all too familiar with. Mortal Kombat X’s Living Towers and League of Legends’ constant mode tweaks like ARAM or EURF always serve to throw people’s expectations of a game on its ear.

Old players love this change of pace because it gives them something new to play. It’s a new meta to discover and mold to in their image, if its even moldable. It’s a new way to look at their vast collection of cards, and special new feature to add to their Twitch streams. Much like when the Twisted Treeline became a new form of ranked play that changed the power rankings of the roster, so could this be.

New players won’t have to feel left out, either. Climbing the ranked ladder is a slow and arduous process, one that is almost impossible to do without months of playing, collecting cards, and deck experimentation. With Tavern Brawl, players have the potential to just drop in and play when pre-constructed decks are on the table, not unlike the challenge bosses in the single player adventures.

@PlayHearthstone OMG! Tavern Brawl will be awesome for those of us who are sick of net decks.

It isn’t the feature that everyone wanted. There is still no in client tournament mode, which almost seems silly considering how fast the tournament scene is growing around this game. There is also no co-op, or 2 vs 2 mode in the pipeline, if at all. Most of the planned additions besides Tavern Brawl will be cosmetic in nature, like replacing the character your hero represents, or adding custom card backs to specific decks. But Tavern Brawl is still a worthy addition, especially in the wake of these expensive and mostly useless updates. New gameplay options is always a good thing. 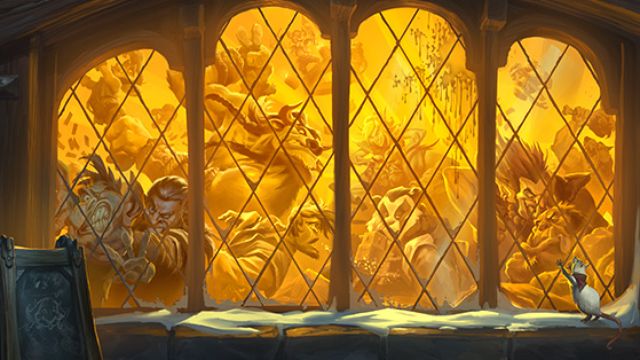 The minute details of Tavern Brawl still need to be highlighted and ironed out - the job for a certain upcoming national gaming convention, perhaps? But if the surface scratching bullet points provide anything, its a good enough picture of a game mode that promises to shake up the current Hearthstone landscape in worthwhile ways. At worst, it’s a distraction that can be opted out of and ignored, like the Arena mode. At best, it could follow in the footsteps of its competitive gaming peers in finding fun ways to reinvigorate their communities. Keep an optimistic eye out for the update towards the end of the month.

Even if you can’t get excited about this, you should still tell us why in the comments below, or tweet us @CurseGamepedia.