If you're to believe Fatshark and Games Workshop, then the End Times are nigh. On October 23rd, you can take up arms as one of 6 characters and protect your nation from a sudden, violent end. The Skaven have organized and pulled themselves out from the shadows, and they plan to drown the world in filth and pestilence. You can't have that, right? Before you run into battle, it may behoove you to sit back and learn a thing or two about the furry rodent menace. 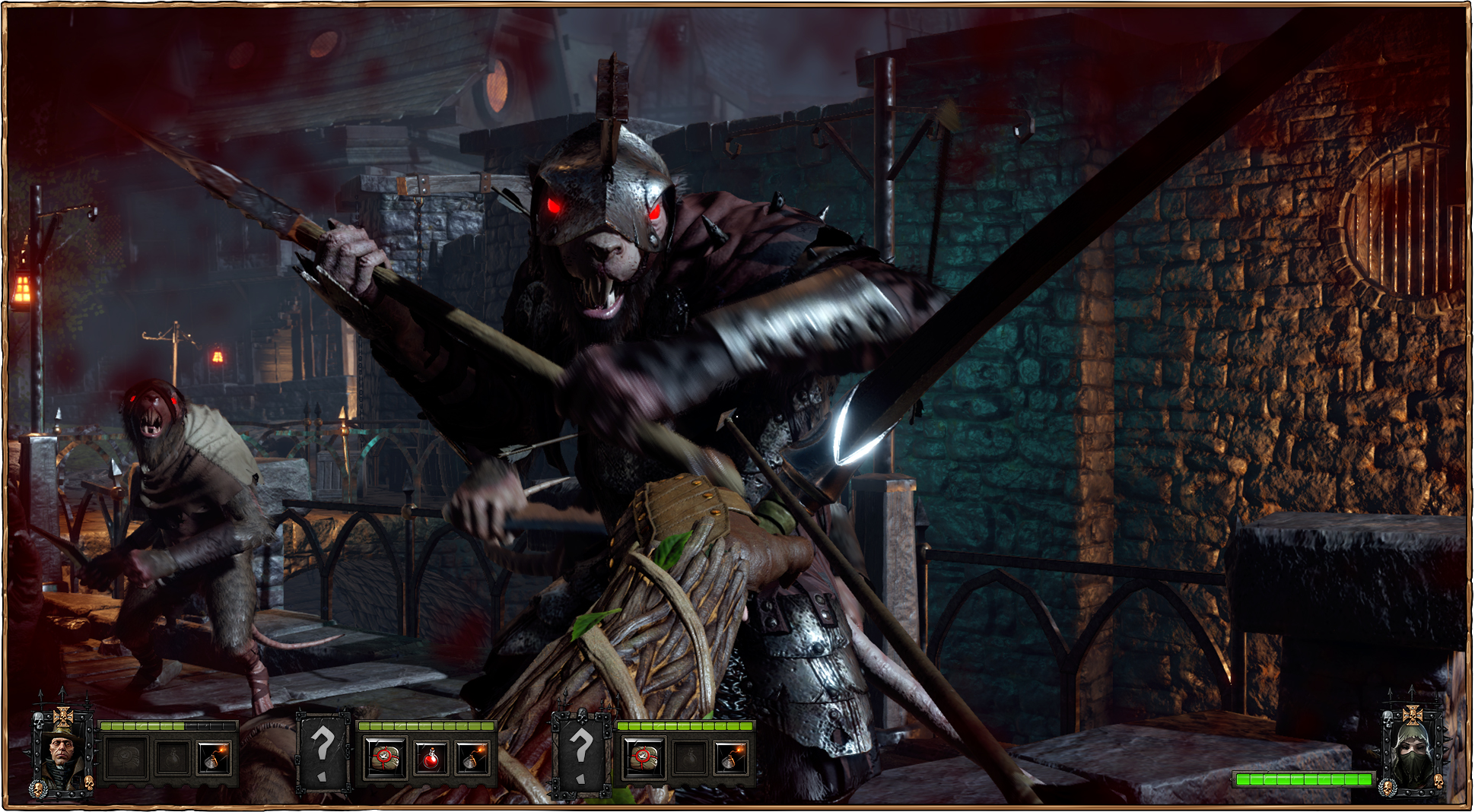 Let's say you are an Average Joe living in the relatively familiar, sword and sorcery setting of Games Workshop's Warhammer Fantasy Battles. There are dwarves and elves, a few different clans of humans, all just trying to make it in a world full of demons from other dimensions, green skinned orc marauders, and not so friendly elves who pray to dark gods. Life is hard.

You're traveling home at night from a hard day doing whatever it is you do to keep food on your family's table, and you take a short cut though a dark alley. You're getting home early tonight, cut purses be damned! You don't see any men of questionable intent in this alley. By the time you're half way though, you can here a bit of wild chattering, though. Maybe a squeak or two. You feel something brush you from behind, you turn to look. Nothing. You turn back and gasp. You wish you saw this guy:

But, in front of you sits a giant rodent, standing on two feet at about chest height, with little, beady, red eyes darting up and down your body. It's teeth are grotesquely huge, jutting out of the front of its face. Under what appears to be an attempt at clothing is greasy, matted fur from top to bottom. This rat-like creature chitters in your face, and you almost wonder how you couldn't smell its terrible odor sooner. Congratulations, you just met a Skaven! You won't be able to tell your friends though,  it kills you and drags you into the sewer shortly after your encounter.

Skaven avoid open contact with humans on an individual basis. They are sentient and intelligent, but conniving and have an unhealthy distrust of everything but themselves. Any single average Skaven is no match for your average man-sized warrior, so they tend to keep to the shadows (and sewers). With the average life expectancy of around 20 years, it's no small wonder that each rat would like to see their life stretch as far as those 20 years can take them. 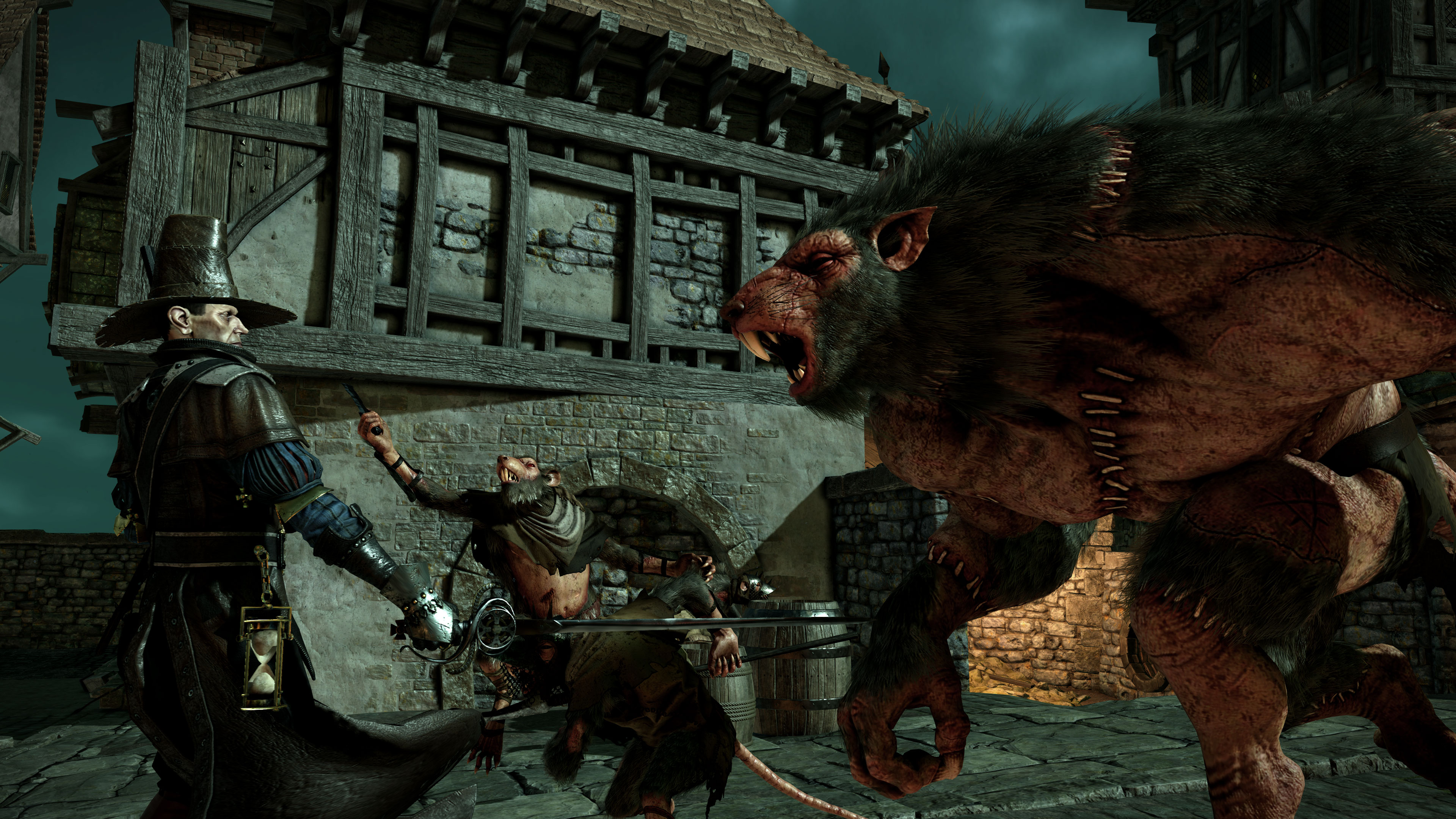 Skaven could probably live way longer if they weren't so concerned with killing each other. The total Skaven population is almost unknowably vast, and they are so tribal and subdivided that they never stay on the same page for very long. The fact that the events in Vermintide could bring enough clans together to cause such a vast invasion is a miracle, in and of itself.

There is some fast and loose structure to Skaven society, though. All Skaven revere a singular god called "The Horned Rat." The Council of Thirteen is their ruling body, and it is charged with delivering The Horned Rat's word to the clans. There are thirteen members of the council, but the 13th and most powerful chair is left empty, symbolically held for their god.

The Horned Rat is a pretty chill god. He's into all sorts of fun things like spreading pestilence and plunging the world into murderous darkness. Whether the Horned Rat actually exists or not is never really fleshed out in the lore, but it also doesn't much matter. The crazy evil Chaos energy that mutated humans and rats into the Skaven is very much real, and it is the all important source of how Skaven can remain so dangerous. 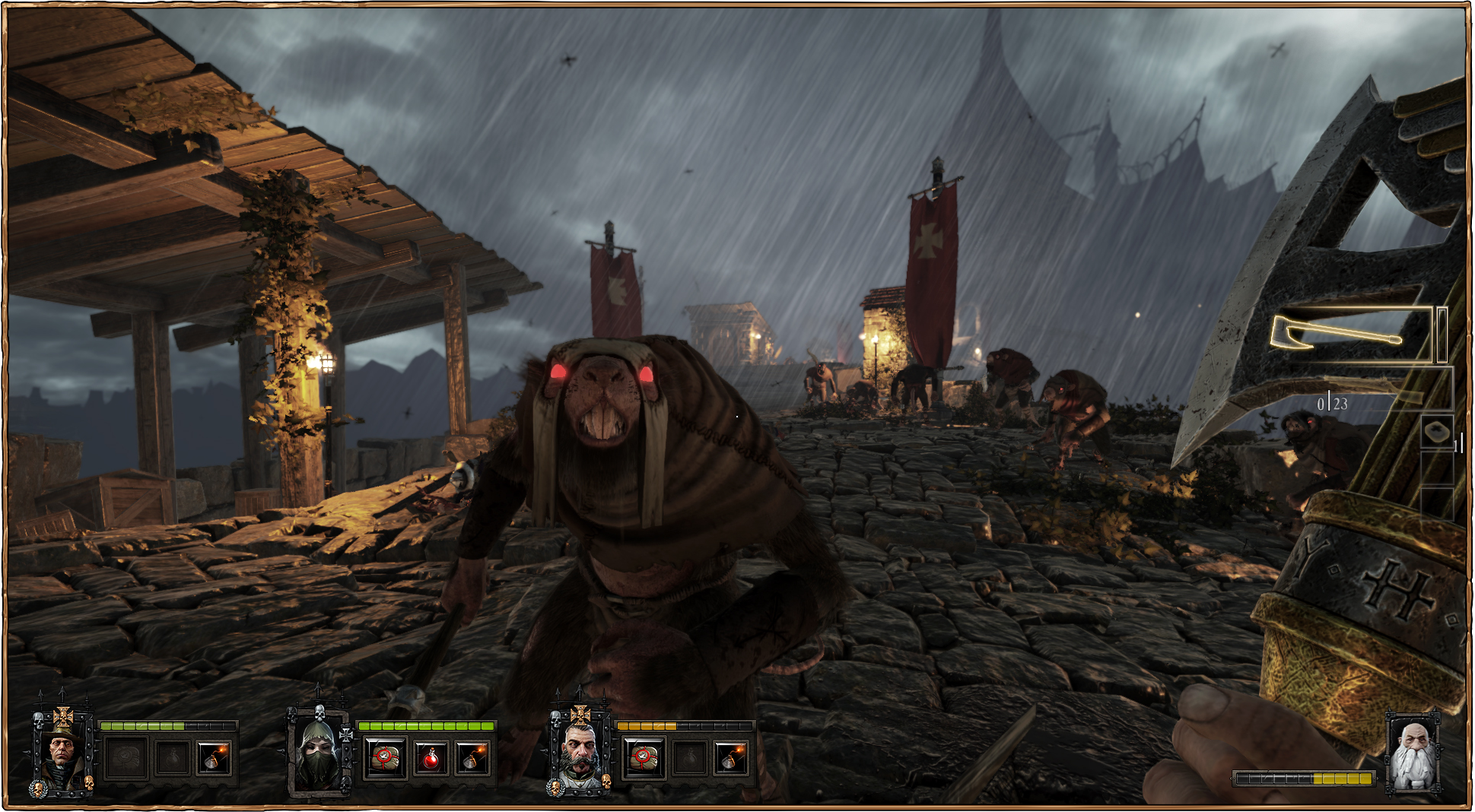 Clans of Skaven are usually developed the old fashioned way, be more aggressive than everyone around you, so that they align themselves with your goals, out of fear or otherwise. Understandably then, clans come and go pretty often. That said, there are four clans - known as the greater clans - that have staying power. These clans tend to be more closely aligned with certain lifestyles and philosophies. For example, Clan Skyre is arguably the strongest clan of the Skaven, thanks to their particular interest in stealing surface dwellers technology, infusing their versions of dark magic with it, and using it to whatever effect they can muster. If it works it works.

Most Skaven clans rely on the sheer number of bodies they will outnumber their enemy by. Not because two rat men are better than one against the axe of a dwarf. Skaven have absolutely no issues with using their own forces as sacrifices for a victory. Even when organized, Skaven believe everyone that isn't one of them is inferior, including each other. If Skaven A and B are killed so that Skaven C could kill a guy, then Skaven C knows that there was no other option.

Sometimes, though, the wanton sacrifice isn't for anything more than letting out their own aggressive selfishness. If a jezzail - a giant chaos energy rifle - cuts through a group of rats just to hit a knight on a horse alone on the field, you can rest assured the shooter didn't like those rats any more than he did the knight.

Skaven make such an interesting enemy, though. Not just because it's a departure from zombies and orcs, which are common fall backs in the genre and in Games Workshop games, respectively. But Skaven have such personality, and they are capable of much more than just running forward and eating your brains. They come in all shapes, sizes, and temperament, and they promise to terrorize your world on October 23rd. Till then, check out the Official End Times: Vermintide Wiki for all of your extermination needs.

5 Ways Destiny is About to Become an All New Game