If you haven't been exposed to the popular multiplayer online battle arena game League of Legends before watching the 2015 World Championships this month, then you've probably just now been introduced to a lot of information you don't quite understand. For people who don't know their Carries from their CCs, this little reference guide is for you. A quick study, and you'll be talking like a pro in no time.

Like any team game, every player on a League squad plays a position that has it's own responsibilities. They aren't so concrete, though. You'll find that most people on the team are looking to do the same things - push towers, kill enemy champions, etc. - so in this way, team composition and role assignment is more like basketball or baseball than, say football.

Top Lane - The top lane (closest to Baron Nashor) is a solo lane, mostly because the champion that would be with them is jungling. Top Laners are usually the "fill" champions - that is to say, champs in the top lane are quite pliable as far as their role is concerned. This is the perfect lane to put a champ that fills the teams weaknesses.

Mid Lane - The middle lane is also a solo lane, and is usually where a team's caster goes. Laning by themselves means mid laners wont have to fight their friends for experience and gold. They level faster than the rest of the team, and usually provide the most damage output. Mid laners find themselves wandering into to other lanes fairly regularly, because they can add a lot burst damage to an enemy before they have time to respond.

Jungle - A champion in the jungle has a few roles. They roam around the middle areas of the map between lanes killing NPC monsters for gold and buffs. They provide a consistent threat of danger to enemy champions, because you never know when the jungler will pop out for a kill, especially on the top lane. They also keep consistent surveillance of the board, marking spots with ward in order to see where enemies are going.

Carry - The Point Guard of League of Legends, the Carry is usually the one killing the most, or at least providing the most threat of death early on in the game. Carries provide high levels of consistent damage to targets, and can rip health way in chunks thanks usually to simple autoattacks. They are often the first thing targeted in a fight, and are normally easily killed if cornered. Carries normally are attack damage based, but can sometimes utilize their ability power to devastating effect. They can also be ranged or melee, but you will most often see them ranged.

Support - Supports partner with the Carry in the bottom lane and assist the team in number of ways. A good support champion has the ability to displace enemies or zone them out of progression. They can control the battlefield in dramatic ways, and help secure kills and gold gain for the Carry. They also help keep an eye on The Dragon, an NPC posted near the bottom lane who provides a big buff when killed. Supports often become the initiators of fights later on in the game. 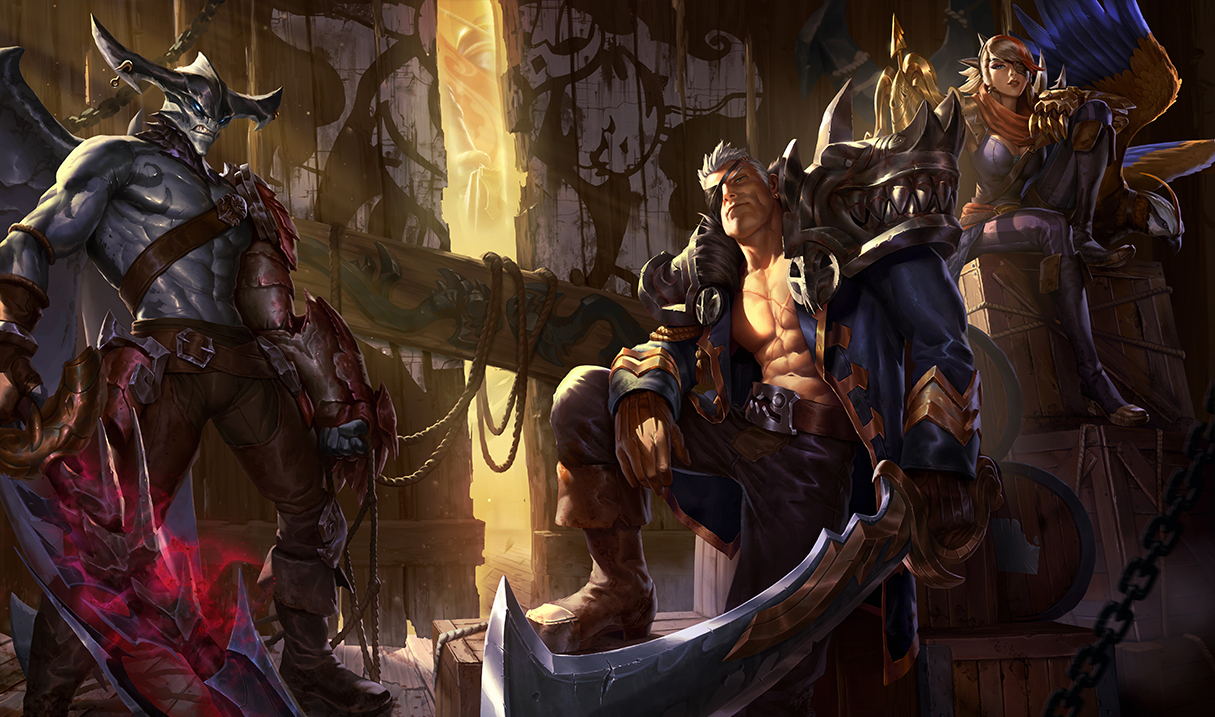 Champion classes are categories that champions get filed into to generally describe how they work in one or two words. Champions usually have a main classes and a sub class. That said, there are no champions with Support or Tank as their only class. There are also no Marksman/Tanks or Assassin/Supports.

Assassin - Characterized by their unmatched mobility and ability to kill single targets quickly, Assassins tend to be the biggest targets on the field. Generally speaking, they are attack damage based, but you'll find some that use their ability power to great affect (i.e. Diana). They are usually melee, but can also be ranged. Your prototypical assassins include Katarina, Master Yi, and Yasuo.

Fighter - Fighters are melee focused champions who sacrifice quick killing ability and mobility for sustained staying power. A good fighter is durable, and possesses a significant suite of abilities that mix disruption, sustainability, and sometimes just overwhelming damage. Go to fighters include Darius, Garen, and Sion.

Mage - Mages rely on their abilities more heavily than maybe any other sort of champion. The'ye effectiveness comes from the sort of long range, area of effect, or crowd controlling they can produce, on top of the damage they can rack up from a far. Mages are often very vulnerable, and do not hold up well under sustained attack. Your typical mage picks would be Heimerdinger, Sona, and Veigar.

Marksman - Once known simply as the Attack Damage Carry (ADC), the term was broken up to further specify how a particular carry would be doing their attack damage. Marksmen use ranged auto attacks to deal constant damage, supplemented by their abilities which commonly alter the way their auto attacks work. Seminal Marksmen include Ashe, Jinx, and Sivir.

Support - As mentioned before, Supports are a carry's guardian angel. Severely lacking in killing power, they make it up with excellent crowd control or ally buffing abilities that can displace enemies and greatly improve allies' effectiveness. They are quintessential for bringing out the best in champions, and are often the unsung heroes of the game. Great supports include Alistar, Lulu, and Thresh.

Tank- A Tank is like a Support in they exchange damage dealing for survivability, but the high end of durability reaches heights on a Tank that are uncommon for any other class. Tanks naturally have more health, armor, and resistances than other champs, and tend of have abilities that enhance one or more of those things. They are best suited against single targets, and use their indomitable presence to pressure soft targets into fleeing. The popular Tanks include Cho'Gath, Nautilus, and Tahm Kench. 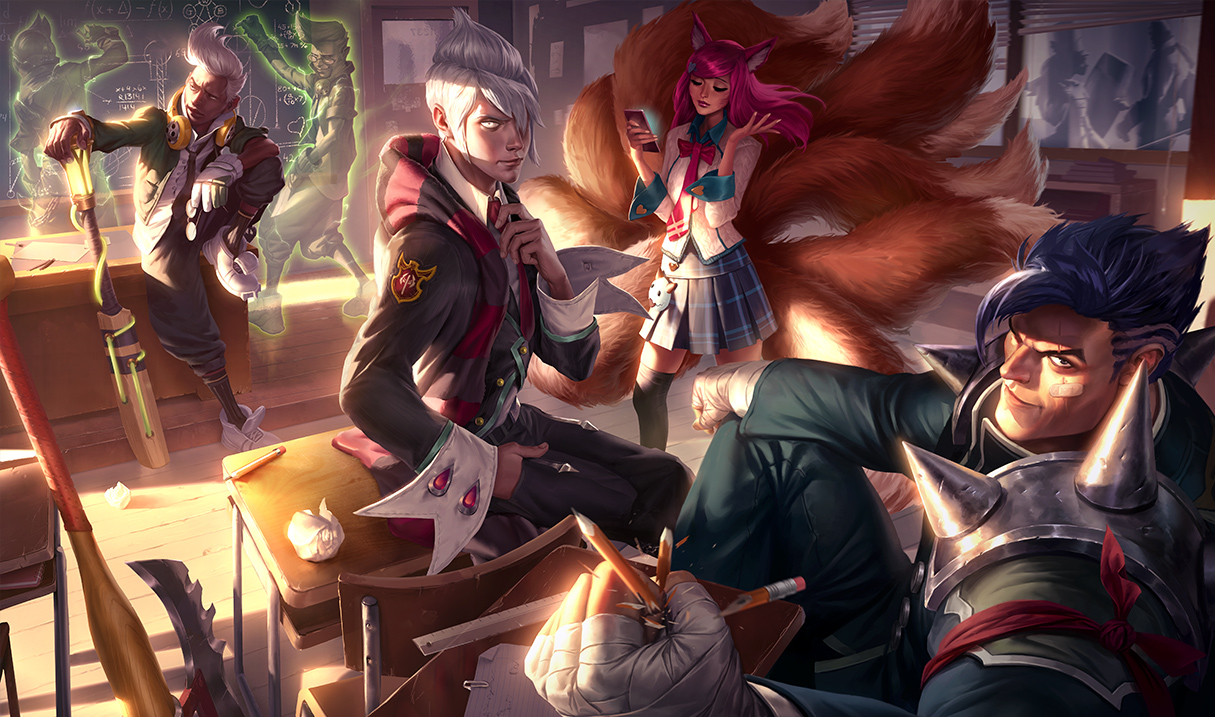 When talking about the game, you will hear players and pundits use a smattering of slang that may or may not mean anything to the uninitiated. There's almost too much colloquial verbiage to jot down and memorize quickly, but here are some of the most important terms that youl'll hear thrown around a lot that you many not already know.

Burst - To "burst" a player is to do a ton of damage in a very short amount of time. "Bursty" champions are capable to taking players out before they even have a chance to react.

Carry - Someone who is "carrying" is a someone who is the biggest threat on the team - getting all the kills, taking all the objectives, pushing all the towers, etc. It's such an important aspect of the game to have "that guy" on the team, that there is a position dedicated to it.

CC - CC is short for Crowd Control, and it comes in a number of ways. Direct CC involves stunning, rooting, slowing, or silencing an enemy. There's also forms of indirect CC, like zoning - using abilities that stay in play to essentially eliminate certain travel options - or simply the threat of your abilities.

CS - CS stands for Creep Score. Creeps are all of the non player creatures that inhabit the map. Every time you kill a lane minion or monster, your score goes up by one. CS is a good indicator of how well a person is gaining experience and gold. The higher the CS the better.

Dive - Someone who is "diving" is chasing or engaging a champion recklessly in order to secure a kill. Usually this involves following a champion while under the protection of one of there towers, or jumping in the middle of a team fight in order to take out a specific target. There are characters well suited for this, like Warwick, who can teleport to an enemy from seemingly no where.

Feed/Fed - To "feed" is to die repeatedly, usually to the same enemy. Every time your killed, the opponent gets a lump sum of gold and experience, and uninterrupted reign to slay minions for more of both for as long as it takes you to come back. A "Fed" champion is the one benefiting from this, and can quickly be a difficult challenge, as with a gold and experience lead comes an item and ability advantage.

Focus - To "focus" a champion is to divert a teams total resources into controlling and killing them despite the rest of the team. Carries and mages are commonly focused first in team fights.

Gank - To gank is to attack out of no where, taking the enemy be surprise. A well timed gank can decimate an otherwise solid laning phase for any given champion, and junglers are commonly the team "ganker" due to the relative uncertainty of their movements to the other team.

Peel - To "peel" is to use crowd control to stop an enemy from attacking an ally. Supports and Tanks usually make the best peelers, and they're often charged with peeling enemies off of the Carry. The best peelers have CC built into their kit passively, like Nautilus or Ashe.

Poke - To "poke" is to use long range abilities that do moderate damage in order to harass enemies. It's an effective type of zoning, as well. Some pokes have added effects outside of just doing damage, like Morgana's Dark Binding.

Siege - Sieges involve one team moving into tower range in order to aggressively pressure the enemy while also taking down the turret. You'll find that teams will pick champions with the express purpose of making sieges as effective as possible.

Ultimate - A character's ultimate ability is normally their strongest, and is the most game changing or quintessential thing about them. The "ulti" can take many forms - some just do a whole lot of damage, some give a really good buff for a short time (or a decent buff for a long time), others are toggles that change the way someone attacks for a period of time.

Ward/Vision - Wards are totemic items that provide sight in places on the map that friendly characters don't occupy. Vision is the total conceptutal sum of that sight. Lots of wards = lots of vision.

Hopefully, this little guide can help you keep up with some of the jargon being thrown around during this month, and make you a more informed watcher/player of one of the world's most popular games. If you want to learn more about it, check out our League of Legends Wiki. Don't forget to tweet us @CurseGamepedia, or leave a comment below.