The Steam Box, this mythical creature-like hybrid of PC power and console sensibilities, has finally hit the open retail market. Its big pitch: now you can play PC isolated games from the comfort of your couch as if it was a PS4 or Xbox One. Many Steam games are great, but they have yet to break into the mainstream because of the apparent barrier to entry by non-PC people.  If you've just crossed over and are looking for ways to start your library off right, take a look at this titles. 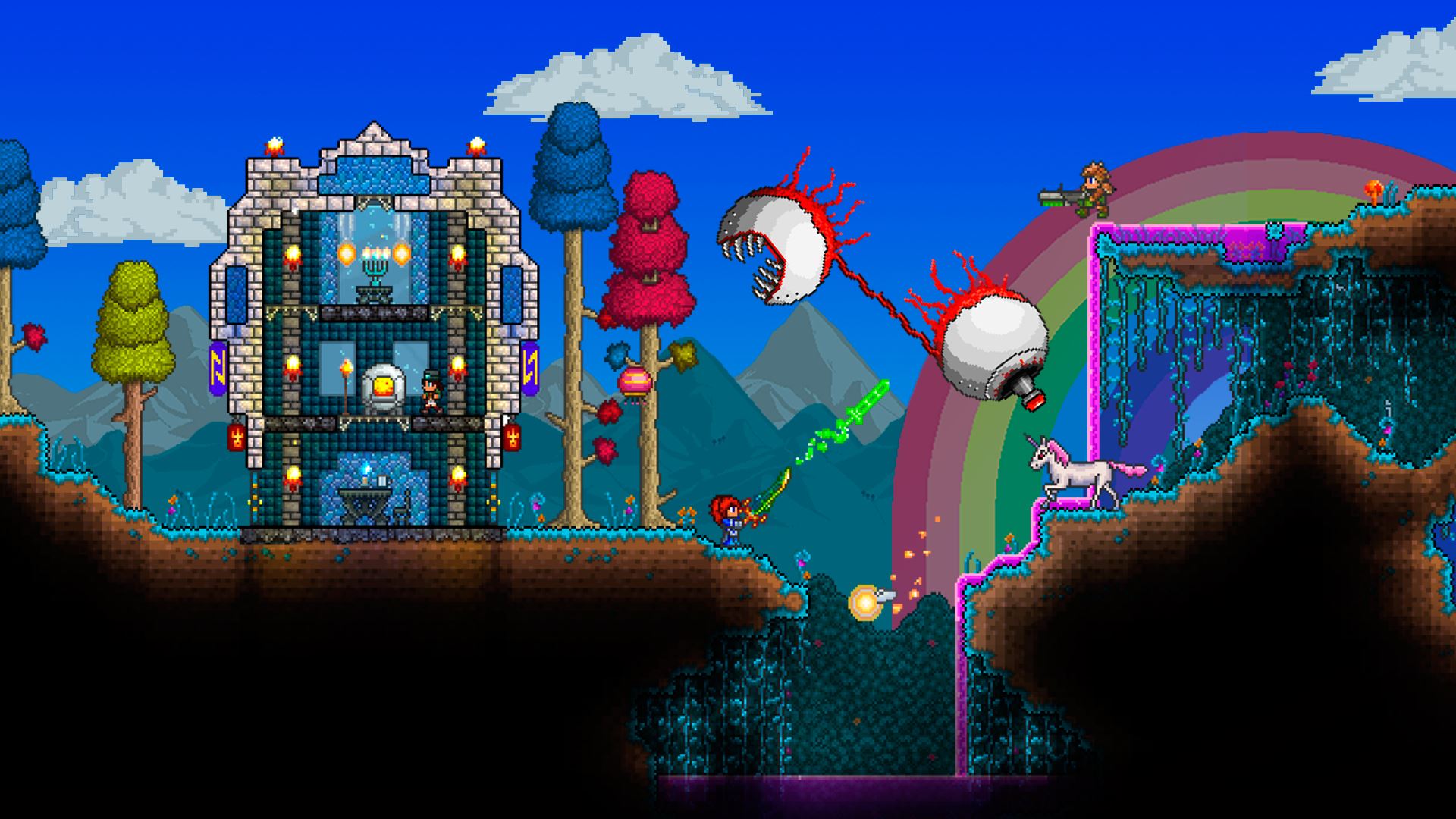 Calling this game a 2D Minecraft is accurate, but somewhat unfair to the adventuring game/building simulator. Many of the features that came to Minecraft later (settlement building, attracting trading NPCs, etc.) began in Terraria. Between the two games, there's also a deeper emphasis on exploration and combat in Terraria. When traveling into new and strange areas, digging into caves and mountains can reveal treasure and new equipment or could break loose terrifying boss creatures who will terrorize everything you've worked hard to build. Terraria deserves a look for anyone riding the building sim wave that's looking for more reasons to roam. Check out the Official Terraria Wiki for more info.

2. The Witcher 2: Assassin of Kings

Maybe one of the best RPGs of last generation, there's a great chance that you didn't play it if you didn't own a PC. It was ported to the Xbox 360 eventually, but The Witcher 2 found its primary success on its native console. Geralt's second video game adventure finds him framed for the murder of his frienemy King Foltest. In one of the best prologues in games, you recount the events of his death in a mixture of flashbacks and present day testimony to hardened Blue Stripes Commander, Vernon Roche. A far more linear adventure than the stellar Witcher 3: Wild Hunt, Assassin of Kings is dense with morally grey characters and a fascinating plot full of political intrigue, mysticism, and wit that is the perfect adaptation of the world Andrzej Sapkowski built. Check out the Witcher Wiki for more info.

There's a mixture of popular gameplay elements and pop culture fascinations that intersect through this Early Access gem that makes it rather undeniably unique. The game is about survival in this wild world, where players craft primitive weapons settlements in order to protect themselves from each other. Oh, and from dinosaurs. You can hunt these creatures, tame them, use them as pets, and even turn them into mighty steeds for use in your old world dominance. Curse's own Brianna has been knee deep in the chaos, reporting from the front lines of the dino crisis. Come to the Official ARK Wiki for more info.

The class-based arena shooter formula that many developers are looking to cash-in on recently has its roots in this eight-year-old gem from Valve. Still supported and heavily played since 2007, Team Fortress 2 is almost synonymous with all of the things Valve does well: tight gameplay with great social tools, a static and well represented community, and a sense of humor. There's frequently special events and fun side objectives from the company to achieve, and some items in the unlockable hat collection are among the most profitable game items in the Steam store for trading and selling among players.

As far as MOBAs go, there are two at the top of the pack, and a formless mass that make the rest under it. DOTA 2 is Valve's entry into the highly profitable world of competitive multiplayer games, and it's a good one. The learning curve is much steeper than its chief rival, League of Legends, but it's a very involved and unique take of the tried and true formula. It's also the true successor of the very first MOBA, Defenders of the Ancients. Fresh off of a huge reinvigoration of the game, now may be the time to jump in. Check out the DOTA 2 Wiki for more.

Maybe the second coming of the legendary Baldur's Gate, Pillars of Eternity sates that old hunger for that back-in-the-day role-playing experience. Coupled with the new school fascination with games that will cause you ritual pain thanks to their difficulty, Pillars has become just what the doctor ordered for many people looking for an RPG that doesn't involve the words "open world". Check out Official Pillars of Eternity Wiki for more info.

If you were looking for ways to develop abject paranoia and consistent fear from the comfort of your couch, post apocalyptic survival shooter DayZ may have what you're looking for. Initially a clever and extensive mod of military shooter ARMA 2, DayZ has since been developed into a stand alone title. It still retains its huge stable of player controls and options, all intended to enable players to survive in a barren world full of zombies. The walking dead are an issue, but you will more often than not find yourself in sniper shoot outs with other players over flashlight batteries and cans of beans. Check out our DayZ Wiki for more.

So, giant rat people have invaded your city looking to kill and eat pretty much everyone in it. You need a crack team of heroes to help you survive the onslaught. Who you gonna call? The six playable psychos in Vermintide, of course. What is more or less Left 4 Dead in the high fantasy setting of the Warhammer universe, Vermintide scratches the co-operative multiplayer itch competently. Dive into battle with three other like-minded individuals, and start capturing points, opening doors, ringing bells, and slaying Rat Ogres. It's a blast and should be experienced by everyone. Check out the Official Vermintide Wiki for more info.

The Banner Saga is a turn based strategy/adventure game hybrid that demands you to make hard choices, both in battle and on the exodus away from your homeland that's being overrun by an ancient enemy. Thoughtful dialogue makes the story encounters feel like more than just clicking options. There are no real heroes in this cold and dying world, just desperate men and women trying to survive. If interesting plot and smart, tactical combat is your thing, than check out this game. Come to our Official Banner Saga Wiki for more info.