The Hero Arena Shooter is slowly becoming the next kart racer, MOBA, or zombie game. The clamor around eSports has gotten everyone trying to throw their hat into the circle in hopes theirs gets some of the residual run off attention from some of the sub-genres more monolithic members. Like every other genre swell, the existential question becomes "how to be different than the competition, both present and future?" Evolve found its niche in asymmetry. Overwatch seems to be making a splash with colorful characters and humor. Paladins, which just spent the last few days in closed beta, hopes genre blending is the key to success. After about a dozen games, I think they may be on to something.

Paladin may have leg up on the competition when it comes to being design specifically with eSports in mind. Developer Hi-Rez Studios has been at it for awhile. Tribes Universe and Tribes: Ascend were their big forays into multiplayer shooters - the latter gaining immense critical praise. But even their first game, Global Agenda, was focused on team based, first person shooting. (Fun Fact: it was also the first Free to Play game on Steam.) You probably know Hi-Rez from the 3D action MOBA, SMITE, which is currently in the middle of its Super Regionals tournament. SMITE follows similar rules that all MOBAs adhere to: minion waves, turrets, enemy bases, etc. But putting you in control of your characters directly, mimicking an action platformer or, yes, a shooter, changed the dynamic enough to make SMITE a survivor among the many, many dead MOBA pretenders. Playing as superhero versions of mythical beings like Thor and Ra is a nice touch, too.

After team selection in Paladins, where squads of five choose from one of eight total characters (in the beta, anyway), gameplay most resembles a mixture of SMITE and Tribes. Each team has a stronghold with a series of gates blocking access to a vault. Your team is tasked with two main goals: shoot your way to securable objectives across the map and hold them long enough to spawn a siege tank, then escort the tank to the opponent's base and help it break down the gates, and eventually the vault. Sounds simple enough in theory but the practice has its quirks, thanks more so to the characters than the mostly featureless map that was present for the beta.

I played the majority of my matches as Fernando, the Spanish knight equipped with a flame throwing lance and shield. He tends to be the close range go-to guy thanks to his unique abilities. One of them turns his authentic-but-highly-impractical shield into a giant energy wall, making you your teams favorite person for as long as it lasts. Couple that with a charge move that has you lunging forward and pressuring the enemy, and Fernando really dictates the pace of the fire fight. His fireball is a long range explosive that can help start a fight, or clean up low health stragglers. He also might be the only character that actually looks like a Paladin, but that's none of my business. 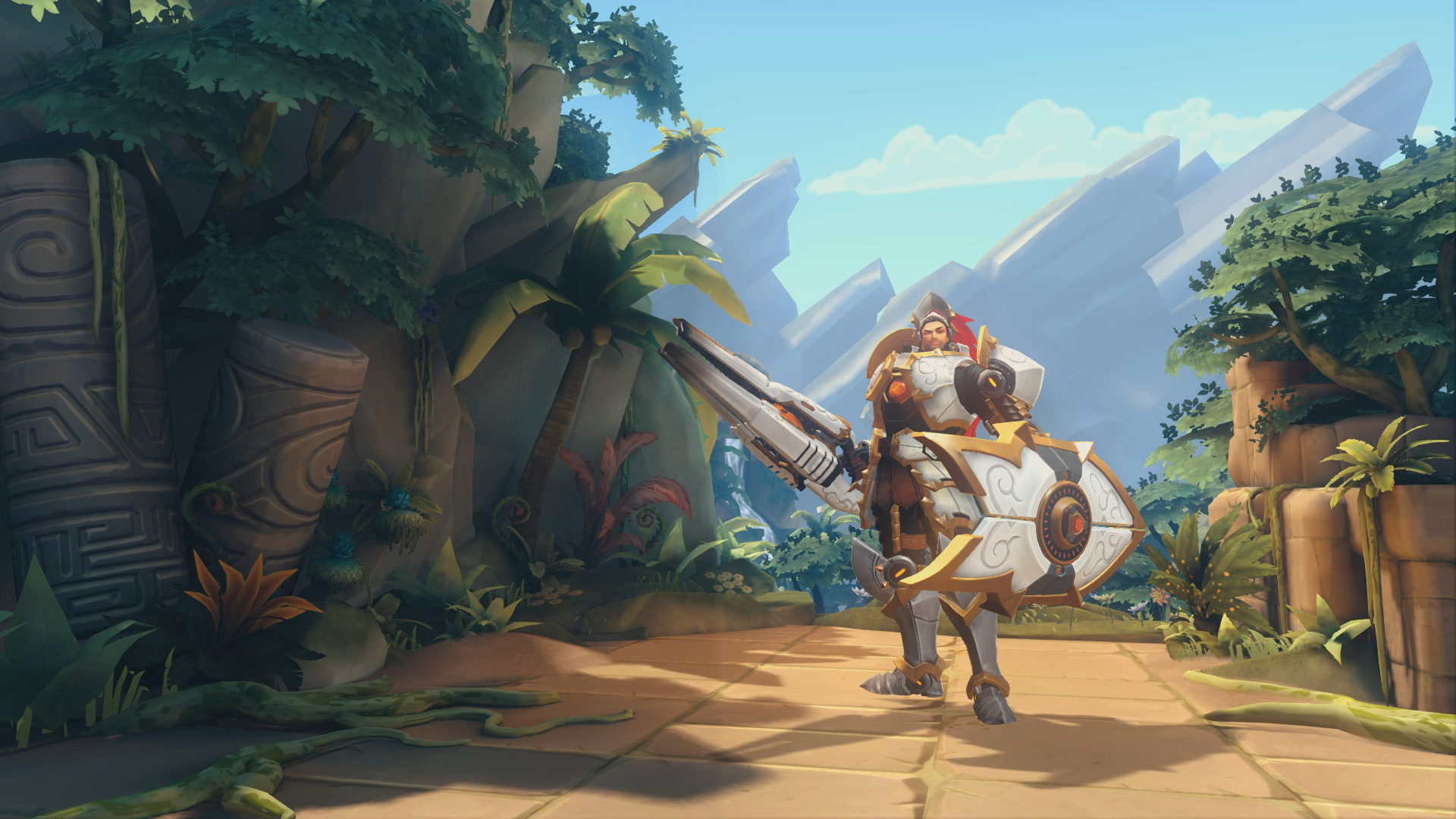 Where the character abilities really get nuanced and complex are when you add the collectible card aspect to the whole thing. Each character has a deck that they draw three cards from at the start of match. These cards mostly augment your character's abilities. In Fernando's case, there are cards that make him take way less damage when his shield is activated, or allow his charge to do damage to whomever he collides with. In action, these adjustments become super useful, especially since the enemy doesn't really know what sort of cards I'm packing. Fernandos on opposite sides could be Fernandos in opposite roles. As you play you gain levels, and with it another card to add to your hand. Suddenly, Fernando is a charging, shielding man-tank and doesn't have to choose one strategy over the other.

Cards really make this shooter something to think about. Reminiscent of burn cards in Titanfall, that extra layer of customization and tactical flexibility really opens the door for games to be bigger than just shooting what's in front of you. Except these don't disappear after you use them, and the effects are a bit more subtle (but still significant). It also adds that almost ludonarrative quality to the characters, who get more fleshed out and fluffy based on the abilities your honing. It works for other games in other genres, like fighting styles in Mortal Kombat X, and could really work here.

Decks are customizable, and new cards are available as rewards in loot chests or in the store. I haven't drawn anything crazy, yet, but as new cards trickled into the beta, I was seeing the vision become clearer. It's a blast to play, and I think there could definitely be room for something like Paladins in the increasingly crowded Arena Shooter space. If you were lucky enough to get into the beta, tell us how you're doing @CurseGamepedia on Twitter. And don't forget to drop into our Paladins Wiki to stay up on all of the need-to-knows.

The Witcher Could Finally Make a Great Film

5 Tips to Survive the End Times in Vermintide