The next League of Legends patch goes live today! The intention from now until Season 6 officially starts is to tie up all the loose ends that patch 5.22 left in its wake, starting with this one, 5.23. Outside of some minor tweaks to characters and masteries, there's been a big change to one of the game's most popular boot enchantments, and new mechanics for minions and champions, in general. Not to mention, a brand new champion debuts this week! Let's get into it. 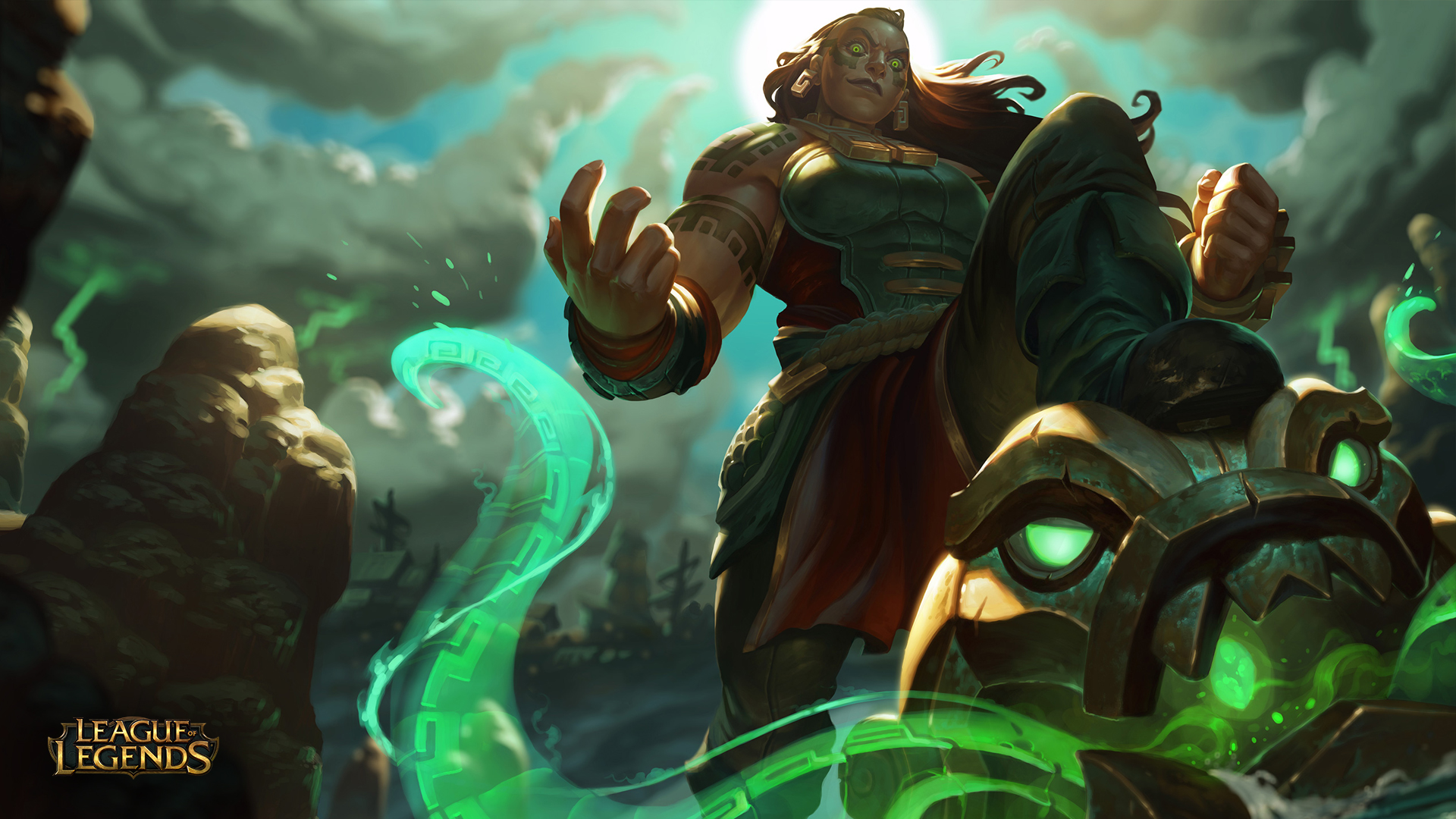 A new champion is on the cusp! Illaoi, the Kraken Priestess looks to join the ranks of the solo laning Juggernauts like Darius and Garen with her unique mix of mid range pokes and tricky engages. She didn't have the same lead time - or hype - as Kindred, which makes a bit of sense. Aesthetically, she's kind of just a lady. Albeit a stocky, glowy-eyed, menacing looking one. She doesn't have that whimsical forest creature vibe of Kindred, or the otherworldly grace and mystery of Bard. That said, it's what she brings to the table in her kit that makes her most interesting.

Her passive spawns the random spectral tentacles of her cephalopod god, which sprout in near proximity to her at the edges of lanes. These guys are important because her other abilities interact with them directly. Her W turns her next basic attack in a dashing smash that does bonus physical damage. It also calls for any tentacle in range to hit the target she just smashed. It's like running through a tunnel of high fives, but far worse and not like that at all.

Her E is a skill shot that literally pulls the soul out of the first enemy champion it hits. A ghostly version of the champ (with the same amount of health as the target) will appear in front of Illaoi. The ghost champ will be nice and dormant while getting beat down by Illaoi and other allied champs. If you can kill the spirit champ before the timer runs out, then you will turn the original champ into a vessel (they will also be taking a portion of the damage you do as this happens). Vessels spawn tentacles on walls like Illaoi, but they will automatically attack them for as long as they remain a vessel. If you decide to turn and run once your soul is taken, you will turn into a vessel anyway. If the E hits you, your best bet is to target Illaoi and do damage, as each attack speeds up the timer. As this could be an issue in lane, this is a huge problem in team fights.

Illaoi's ult is a giant slam that does AOE damage to everything around her. For every champion hit, a tentacle is summoned. If a vessel is nearby, well, that guy is suddenly really sad. The damage that Illaoi herself can do on top of the many tentacles that exist/will spawn is enough to overwhelm any champ. If the E is prioritized on squishy targets like marksmen or mages, they won't last long enough to mount a final stand. Not to mention, with all those tentacles and champions around, it's going to be really easy to get the most out of W. She has a surprising amount of kit synergy for a Juggernaut, whose role is usually "be big and slow and hit faces."

Illaoi's Q is the only thing that doesn't directly relate to the others. It's a middle ranged skill shot that slings a tentacle from her idol that damages everyone hit by it. If it hits a champion, then Illaoi gains a little bit of health back. A good poke is key to a dynamic solo laner, as it allows to keep pressure on the enemy without having to dive in and put yourself at extra risk. Against a ranged solo laner, she's a better trade option than most in the role, even if she will still be in more danger than against a melee focused opponent. It has no fancy interactions with her passive, but it's still a solid lane poke with a little bit of sustain - that is to say, it's a longer ranged attack that harasses from a distance, and the life that can potentially be gained can keep you in lane and healthy longer.

I like Illaoi's potential as a mid to late game party pooper, but I question her early game presence. Can her poke really keep the scarier top melee top laners like Sion, Mundo, or Darius at bay? If the cooldown is quick, sure, but her Q can't refresh too much slower than say Mundo's poke or Darius's Q, or you'll have your hands tied in most trades. I will most definitely be giving her reps, though, as any new champs in my main position is a welcome addition for me.

There's always been a bit of a disconnect between how large characters are in game, and how large they should be under reasonable assumption. A literal walking, talking tree like Maokai should be noticeably bigger than say Spider Elise. Not to scale, of course, because you'd never be able to see some of the halfling-like Yordles (Teemo, Poppy, Heimerdinger) in the midst of all the action. Riot has decided to address this mostly aesthetic, but lingering issue in this patch by doing a round of resizings.

Some champions will find themselves slightly bigger, like Rammus, Olaf, and Warwick. Others will get smaller, like Tahm Kench, Zed, and Tristana. Riot stressed that this is purely a visual change to reinforce some of the games design philosophies with certain characters, and will not effect a champion's hitbox. As fighting game players might attribute, hitboxes are important, because they are the invisible ranges that dictate how much space a champion occupies, and what barriers an ability has to cross before being considered a "hit." Bigger hitboxes usually means easier to hit.  The full list of changes are in the patch notes on Riot's website.

Coupled with the size changes are Attack Range changes for some melee characters, which will most definitely have a profound impact on gameplay. Generally speaking, Riot is looking to standardize the melee attack range "statistic" into something that resembles tiers, instead of the hodgepodge of numbers that fill the space now (Nunu's melee attack range is really 137.5, though? Why the half?). As it stands now, it looks like two tiers have been clearly defined, a 125 tier and a 175 tier. A handful of champions have had their ranges increase to the latter, including Mega Gnar, Sion, and Trundle. Tahm Kench, who's melee range was 200(!) will get reduced to this tier as well. Nunu has his range reduced to 125. Sorry Nunu, but at least its a prettier number.

Initially, what this means is that anyone laning with these champs need to be a little more careful. Zac can now hit you from 50 units farther away. You don't really need to know what that translates into on the map to know the basic interaction here, melee champs that have to dive in to get you now don't have to dive in so far. Remember this when Shyvana is pulling your legs off.

Introduced in Preseason 3, Enchantments were to add an extra level of customization to a champion by upgrading their tier 2 boots (Berserker Greaves, Ninja Tabi, etc.) and adding some minor alternate functionality. There are 5 boot enchantments, though if you see someone build anything else but Homeguard, then you know they're just trying to be different.

The Homeguard enchantment is the best choice for a number of reasons. The 200% move speed and health/mana regen bonus granted by visiting the shop was great when you had to recall back to base to defend it from invaders quickly. When you die and respawn, you can gallop back to lane rapidly. If you're feeling particularly devious, you can upgrade to Homeguard on a champ like Hecarim, who already has natural speed and gets an attack damage bonus based on his total movement speed. Teleport into a fight from the shop and make the next 8 seconds of the enemy's life really difficult. Unlike many of the other enchants - which see summoner spell cooldown reductions or smaller, more permanent move speed buffs - Homeguard was an enchantment that could always help you, no matter who you were playing. So, of course, they removed it.

As a buyable upgrade, at least. Now, Homeguard is a global event that affects everyone after minute 20. It's in a diminished form, though - the speed boost is only 175% and the regen is down to 12% a tick from 35%, but for free it's a pretty good deal. Now we are free to figure out what these other enchantments do.

The minion pushing game is about to get very interesting. In an update that was actually supposed to happen in last months mega patch, Minions will new get bonuses based on the lead your team's average level has over the enemy team. The math is silly and I don't like it, but it essentially says that your minions will do more damage and take less damage to and from other minions based on the difference between average level leads and turrets destroyed in lane.

Coupled with the turret tier changes in the last patch, this is yet another step towards rewarding teams who are working together to dominate objectives, not just standout players who snowball and carry a team by virtue of being totally unstoppable. Pushing lane becomes easier when everyone is staying safe and leveling together. It may also make games way shorter, when a team gets big advantage early. I'm not even mad.

Maybe even bigger news is that minion collision buffer sizes have been increased, essentially adding more space between them. Anyone who's played League regularly this season probably has at least one story of their champions taking the scenic route around a clump of minions and blowing an angle, skill shot, or dive because of it. More space in minion clumps means more opportunities to wade through minion fights and not watch the AI try and take you away from a targeting turret the long way.

For more information on Patch 5.23, including Mordekaiser's and Lucian's post Preseason patch tweaks, go to Riot's Patch Notes webpage. To keep up with the pro scene or read up on your favorite champions, drop by the Leaguepedia. And don't forget to tweet your thoughts about it @CurseGamepedia.

League of Legends Patch 5.22 Notes: Welcome to the New Age