As 2015 comes to a close, it does so with one final patch in Riot's mega successful MOBA, League of Legends. This patch has some serious throwbacks, including the return of the wintry Snowdown and the re-debut of a more capable Poppy. It also takes a good hard look some champions who have gone unmolested by nerfs and bans for awhile, as well as re-tooling the jungle and readjusting items. It's not as significant as other recent patches, but it's still full of important features and changes that will definitely affect most players. 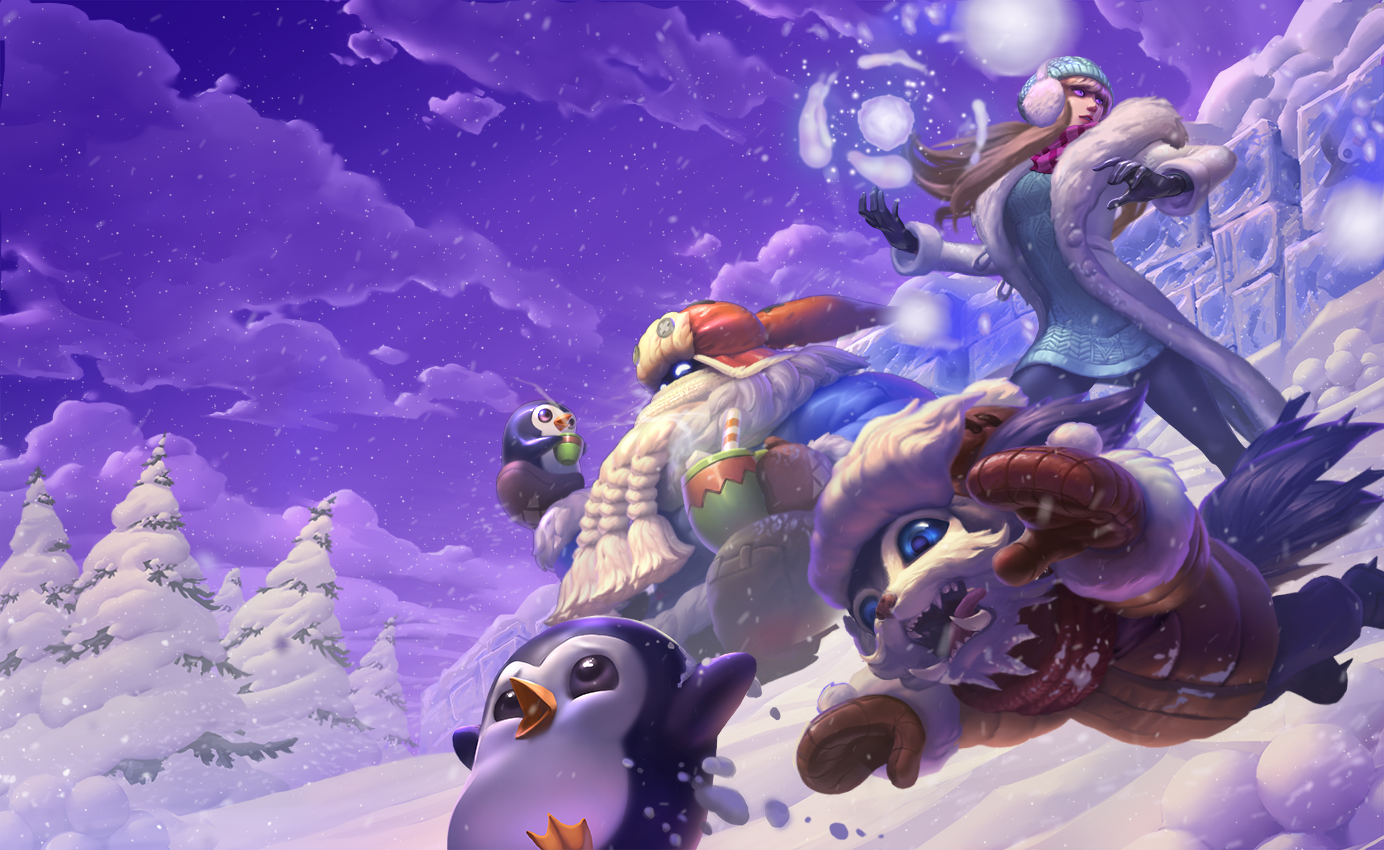 The Wintry Wonderland of Snowdown returns to Summoner's Rift to cover the month of December in icy glee. Snowdown is one of the more elaborate visual traditions in League. The Rift is covered in presents and holiday cheer, and minions are bundled up in scarves and snow hats. The amount of special poro wards, skins, and icons hit the store in full force, as well as champion costumes that tend to be some of the most fun of the year. Snow Day Bard is absolutely perfect.

Maybe bigger than the simple look of it all, Snowdown also brings with it its own game mode in the form of the returning Legend of the Poro King. Turning the Howling Abyss into a grazing ground for poros, each player gets a pair of poros and a new summoner spell for each, Poro Toss and To the King. Poro Toss is a long ranged skill shot that chucks a poro at the enemy. When it makes contact, activate the spell again to dash to the target (which means it's a great time to play Taric). After your team succeeds at connecting with Poro Toss 10 times, the Poro King arrives and slowly trots his way down the lane, crushing all in his path. Your second spell, To the King, is available then, and launches you to wherever the Poro King may be. Clearly this mode is more for flashy fun than competitive balance, but it's hard not to smile when you watch the giant Poro King hop his chubby body into turrets.

The Snowdown celebration also brings not-quite-winter related discounts to player in the form of "Your Snowdown Shop." What that seems to suggest is that there will be personalized skin and icon discounts based on each player's champion collections, which is actually pretty nifty. When you buy a Legendary Skin this Snowdown, you will unlock a Mystery Skin, which would unlock another Mystery Skin if it turns out to be a Legendary, so on and so forth in a phenomenon Riot calls The Legendary Snowball. You can also get bonus RP on every purchase all this month. For more details on Snowdown, sled over to the Snowdown 2015 website. 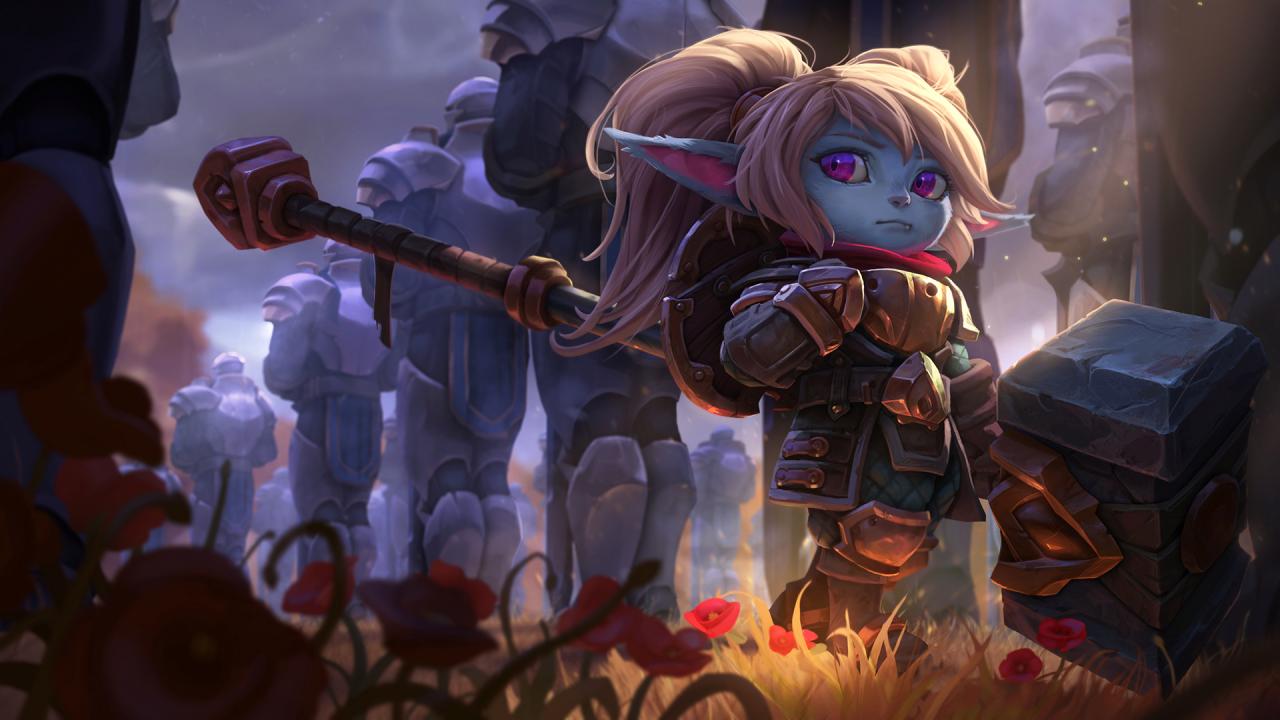 Keeper of the Cuteness

The much hyped reboot of one of Riot's oldest champions has finally hit the Rift in this patch. The original Poppy was one-dimensional and had very limited character outside of her invuln shield, but this new Keeper of the Hammer is quite a package. Her crowd splitting aggression is now more fully realized thanks to her new suite of abilities, and she still retains the stalwart presence that Diplomatic Immunity provided without being a little too broken.

Starting with her passive, Iron Ambassador, Poppy flexes her muscles as a capable duelist. Every so often, her auto attack becomes a ranged attack, as she chucks her buckler at the enemy and nails them with bonus magic damage. The shield then skitters to the ground nearby. If Poppy can reach it before her opponent, she will gain a health shield. If the enemy stops it first, her passive stays inert for a time. Though clearly a bruising juggerlady, this periodic ranged attack lets her fight off carries when utilized carefully. It can be used to engage or just poke the ambition out of a froggy marksman. The shield pick up buff is nice, but probably shouldn't be relied on as heavily as Draven's or Olaf's pick up bonuses. It's there if it's easy to get, but don't expose yourself to extra damage for bonus health.

Hammer Shock is almost a melee version of Vel'Koz's Void Rift. After a ground smash which does damage upfront, the ground itself explodes again after a delay to do more damage to whomever's on top of it. It can probably be used similar ways, too. It has a small amount of zoning potential, but it's a great way to capitalize on stunned or slowed targets. A lane partner who can cc well like Ashe or Morgana can really help bring the most out of this ability.

Or she can do it herself with Heroic Charge, the only ability from her old set to make it over. It's largely the same from her old loadout, too. After dashing, Poppy hits a target and carries them a distance further, smacking them with some physical damage. If Poppy pushes the target into an obstacle like a wall or a turret, she inflicts more physical damage and stuns the enemy for a short duration. Self-set up for the Hammer Shock? I think so.

A new ability of hers that I'm very interested in trying out is Steadfast Presence. It has a passive element that grants bonus armor and magic resist, which doubles when below 40% health. Poppy becomes harder to kill the more she is hurt, because she is as persistent as she is adorable. The active portion of the ability is its real charm. A barrier surrounds her that gives her a move speed buff and prevents dashing through it. If someone is caught inside it, they can't dash away, and vice versa. So 10 minutes into Top Lane and Chill when Renekton gives Poppy that Slice and Dice look, she can stop that nonsense before it starts. In team fights, Poppy becomes either a wall for her squishes or a prison for the enemies. It only stops the first dash of a combo, though, so Ahri can still escape. It can also be flashed or blinked over, so Ezreal has answers as well. But Poro King have mercy on that poor Lucian caught in the mix.

Her ultimate, Keeper's Verdict, might be my new favorite ult in the game, if only because of its troll potential. Upon activation, Poppy charges her attack. Charging increases the range of the skill shot - a range that can get pretty large. A second charge smashes her hammer down and produces a giant charge, which explodes from under an unsuspected enemy and flings them towards their nexus. The length of the charge dictates the distance they travel. Travelling champs are untargetable, but they do take a great deal of damage and are most likely very salty, as they are effectively removed from the fight for a significant period of time. Every time I see the ult I laugh, which will probably stop as soon as it happens to me.

A few items got nerfed, which may or may not become a big deal in the future. The most interesting one is probably Zeal, which is now more expensive to make and all of its items are more expensive to buy. When Zeal was made more efficient, the infamous Marksman offense spike started coming way sooner, and ranged auto attackers were becoming an pervasive issue. Zeal's price hike should slow down the inevitable, so that any given opponent can scale properly if they play well enough. Interestingly enough, Trinity Force actually isn't going up in price with it. Tons of Damage, indeed.

Dead Man's Plate, one of my favorite new items, is also seeing a downgrade. The passive speed boost when fully charged, the bonus damage on that charged autoattack, and the 50 armor are awesome. The 600 HP was what made the item a no brainer to include in all Juggerbuilds. Lowering the HP gain by 100 puts it closer in line with its counterparts Randuin's Omen and Sunfire Cape. I still love you, Plate.

On hit, energized attack proc items no longer have their damage stack. Now, the effects may stack, but the damage is decided by whatever the highest source of damage is. So as you can still get the crazy range from the Rapid Firecannon/Statikk Shiv combo, you won't get the damage.

For more item tweaks, like the changes to Essence Reaver and Phantom Dancer, as well as the tweaks to the brand new mastery system, drop by Riot's Patch 5.24 webpage. Keep up with the League Pro Scene between seasons at the Leaguepedia, and tell us how you feel about these changes on Twitter @CurseGamepedia or on Facebook.