It's an inevitability, really. At some point during one of your night's League of Legends Summoner's Rift matches, be them ranked or normal, someone will get frustrated from ganks and teamfights and claim their losing record is solely due to the fact that people are afraid to fight them one on one. Ignoring the fact that a three lane map with two teams of five is designed for team play, they just need you to know that their Master Yi build is perfect for snatching your soul from your body, if only you meet them in the jungle alone.

It's a bit silly, really, to attempt to ransom an opponents pride like that simply because yours is a little too fragile. I've heard the basketball analogy a lot - it's a team game that's often the sum of a great many one on one engagements. Which is true, but how many basketball players consider the idea that they may have to push through three people for a lay up cowardly? Ones that never leave the local rec center. 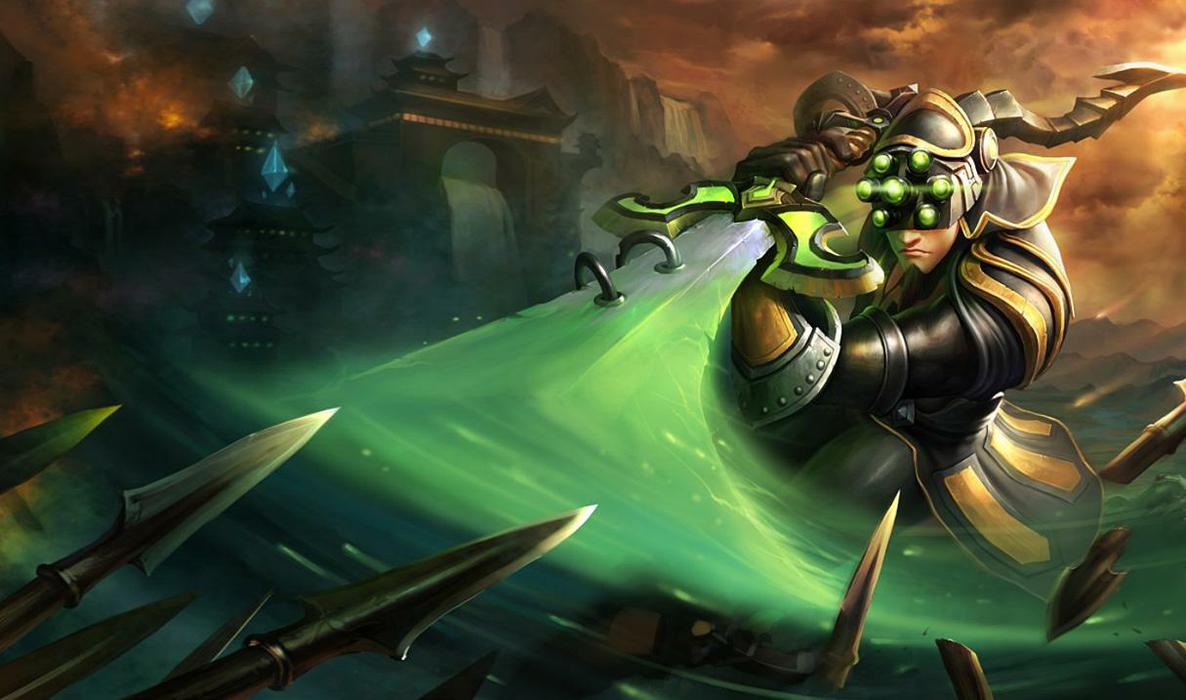 The team work aspect of League has become more and more important every season, with this upcoming one looking to hold the biggest changes to gameplay to accommodate the unit as opposed to the individual. People have been divided over what dynamic queues and scaling minions mean for ranked play going forward, but a focus on playing together can really only mean a more accommodating, less toxic five on five experience after powering through the growing pains.

What about the old guard, who fancy the individual accomplishments over the group? The ones who grew up in a Solo/Duo Queue sort of world that has turned them into self-focused survivors? Give them their own game to play.

One on One League matches have always hovered around "side show" territory for a few reasons. One, Riot doesn't really support it in its client. Sure - you can make a custom game and invite folks, but there's never really been a high profile One versus One mode. Secondly, most of the 127 champions really aren't designed for long term dueling. Many characters find their true strength when diving in and unloading on a champion that has been otherwise distracted or disabled by someone else. Thirdly, watching two beefy tanks smack each other in the face for 30 seconds isn't as cool as it sounds (and it doesn't sound that cool). The most entertaining duelists have always been the risky Assassins, bursty mages, or snowballing Juggernauts - the ones with the flashiest moves that blast people away quickly. It's always been the home of those folks calling you into the jungle in the middle of a Rift game to prove something, and they're a whole section of the champion list that those sorts of people aren't picking.

Watching the pros do it at the All Star Event this past week might have begun to change my mind, though. Even the One v One tournament winner, Team SoloMid Captain and Mid-laner Søren "Bjergsen" Bjerg, reportedly knew how gimmicky this sort of game can be, as he and his eventual finals opponent and new team mate Peter "Doublelift" Peng conferred before the match to decide what their picks should be. Not to rig the match, mind you, but to figure out what match ups would actually be fun to play and fun to watch. A strange, almost pro-wrestling style pre-booking seems that may have contributed to the finals watchability. The main component to that match's luster: the skill level.

Doublelift is one of the most consistent ADs in the game, despite making an early name for himself with the likes of Blitzcrank and Poppy (the old one, not the brand new rework). He exemplifies the position and all of its idiosyncrasies, and is a stand out bottom lane competitor. He's also quite the pentakiller:

Bjergsen is no slouch, though. Barely an adult at the tender age of 19, Bjerg is one of the premier mid-laner's in North America. Mid-laners tend to make the best duelists, and with Faker eliminated early, there were few major threats to Bjerg in the one lane vacuum of the Howling Abyss. A game that's essentially just about killing each other in spite of its objective heavy inclinations is always an awkward thing to watch, but when you ramp the skill level up and remove the distractions, the talent of individual players on display is fascinating.

Like watching two high level Street Fighter players shuffle around screen, you can see the tension between two really good solo laners as they jockey for the tiniest units of space. You can see how every dodge is important, how every missed skillshot can be a damning mistake. The more meticulous game keeping behind League - the Summoner spell cooldowns, minion wave pressure, etc. - is now front and center above the shiny spectacle of knockdown, drag out base turret team brawls. It finally shows off that gaming purity that is being implied, but poorly translated, when that troll beckons you to "1v1 him."

The overall problem is, how can Riot make that an experience that everyone can have every time they play? I'm sure if they knew, it would have happened already. But in lieu of a dedicated Singles mode, watching the best in the world duel each other in public forums more often can serve as the best commercial for League of Legends' simple, yet impactful competitive combat design.

Could 1v1 ever really be a "thing?" Let us know on Twitter @CurseGamepedia, or stop by our Facebook page. Drop by the Leaguepedia, your top source on the pro League circuit, and see who would make great duelists.

League of Legends Patch 5.22 Notes: Welcome to the New Age

League of Legends Patch 5.24 Notes: Time for a Snowdown